The first Sapphire route between Wrexham and Chester was certainly a big step forward in buxury travel. Top deck seats were 2+1 and squishy ... 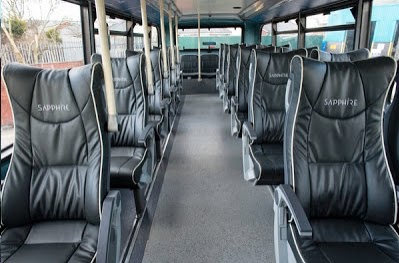 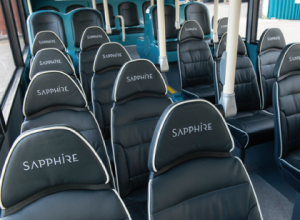 Roll on to the launch of Sapphire 31 and 31A in Leicester and you get refurbished buses, not new, ... 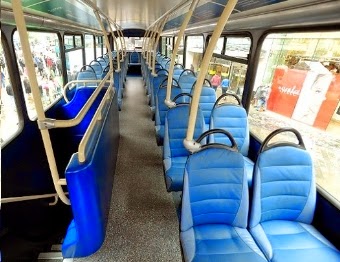 ... with 2+2 non squishy blue "leather" and without high backs. Disappointing.

Then there was audio-visual without audio. Although, on both fbb's Oadby Sapphires, the screens were working adequately (but not perfectly; some stops were shown after departure), there was no audible audio.

Oadby town centre is being refurbished and the main shopping street is closed. Leicestershire council has provided some "dolly stops" ... 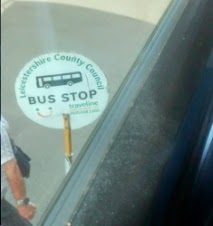 ... on the diversions and there was an explanatory screen on-bus, if you were close enough to read it. 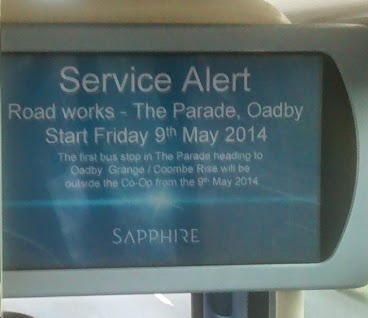 Having read it, the next stop announced on screen and in audio silence was  The Parade , a stop not served during this phase of the road works! Presumably the programers at the Arriva depot could insert an "alert", but changing the whole route gubbins to remove the missing stops would have involved a completely new GPS satellite launch. Perhaps the local space lads could help? 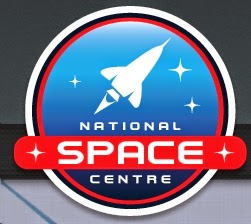 Nearly forgot. there was an explanation of the rerouting on a small poster on a lower deck bulkhead. 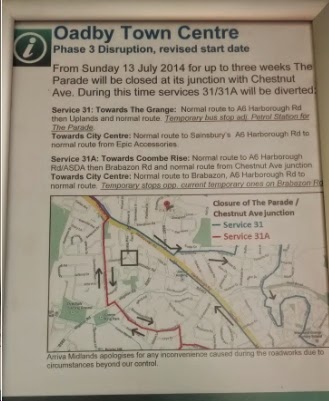 Correct but illegible unless you were sitting in the seats directly in front of it. Poor, especially for inexperienced visitors. This was fbb's first ever visit to the suburban solubriousness of Oadby, so even after prolific pre-expedition preparation, the chubby one struggled to understand.

fbb concluded that the Leicester Sapphire experience was somewhat less jewel encrusted than that between Wrecsam and Caer.

But what was really really depressing was the appalling state of the "route equipment", bus top flags and at-stop information. Here is a selection of stop flag pictures showing a steady deterioration as the bus left the opulence of the city centre and progressed to the depressed slums of Oadby. (?) 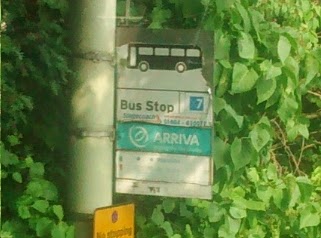 But the only "operator" label is a tired and peeling Arriva. Presumably that company has gone bust?

This flag was, at least clean; but hardly informative with possibly helpful stickers removed. 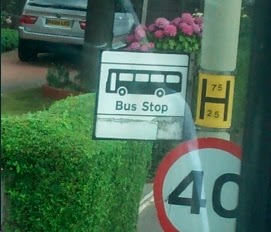 Centrebus to Fosse Park stops here or did? But doesn't? Or does? 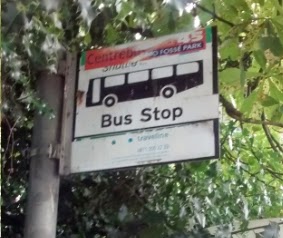 And an attractive mixture of white sticky vinyls and older patch-ups that have deteriorated to grey. 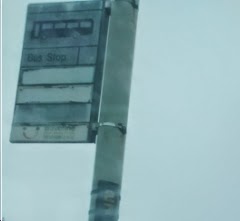 The word "Sapphire" did not appear on any stop flag from London Road (Leicester Station) to fbb's alighting point at Sainsbury's on Glen Road.

There were departure lists at the stops but, of course, no timetables. From other operators and in other localities, these lists have at least a guide as to length of journey but no such minimalistic help from sparkling Arriva. Just a list. 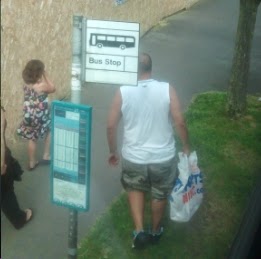 Some stops, like this one on the estate in Oadby had a very useful map, NOT. 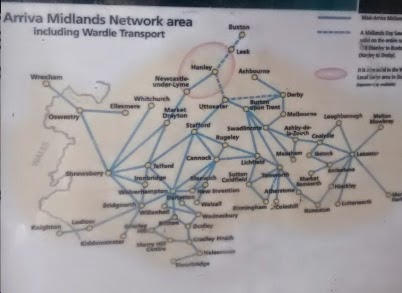 It is good to know that Arriva operates buses to Shrewsbury when you are hoping to get off at Sainsbury's in Oadby. There are perfectly adequate maps in the timetable leaflets and on-line. 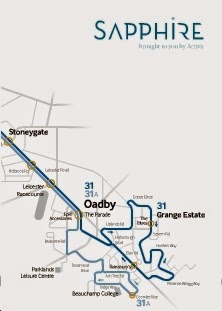 Even a route diagram like the ones on the buses ... 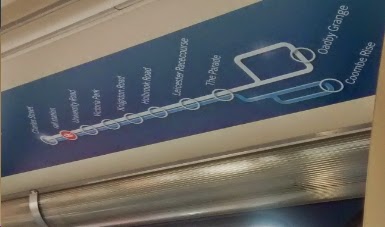 ... would be more helpful, (OK, less unhelpful) that a crude and meaningless network diagram.

The 1630 trip was well-loaded and the majority of those on board had alighted by Oadby not the Parade. Voyagers braving the wiggly estate were small in number.

But before we enjoy the untold excitements of the return journey, fbb repairs to Sainsbury's for a mugga and a meal. "Fish and chips, please", requested fbb, conscious, as always, of his dietary needs and dangers. 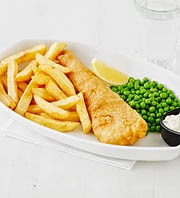 "Sorry, we've run out of fish." came the barely apologetic reply. Now, there's a thing. Downstairs is a huge supermarket with racks and racks of frozen food including loads and loads of fish products. But the caff has run out of fish. Strange are the ways of our supermarket managers? It'll be a different line on the cumputer.

So it was cottage pie. 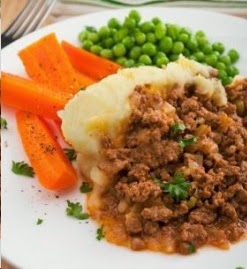 Hardly a gourmet experience but an ideal opportunity to wonder how the cook manages to create translucent and totally tasteless carrots. It must take years of training. 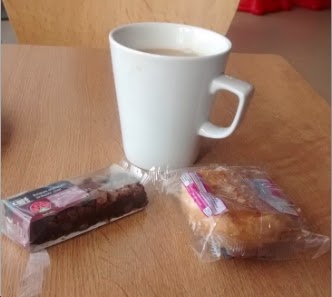 Pud was a Belgian chocolate gooey thing plus an Eccles Cake inadequately stuffed with eccles. But the repast (?) filled a gap and prepared your tireless transport investigator for the return journey to central Leicester.

To recapitulate; whilst some of the Sapphire routes are equipped with new rolling stock, Oadby was allocated refurbished buses; but not refurbished to the same Sapphire standards as, for example, the first sparkler in Wales. Apart from a visual screen showing stop names, something that is becoming universal in London town, it is hard to see much difference between this and an "ordinary" route.

What is very much below par is the quality at the roadside. No doubt there will be the usual excuses; almost certainly the bus companies have devolved stop signs, shelters and timetable provision to Leicester City and Leicestershire county but, surely ...

At least nip out on a dark night with a step ladder and screw some proper signs on the poles. There's a pretty good chance that the local authorities will never notice! 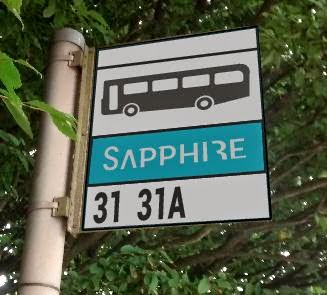 fbb knows of at least one company that would have never allowed such a sloppy announcement of its presence on the road. 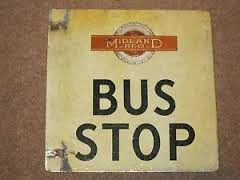 To add to the brand confusion (dilution?) you can now have single deck Sapphires ... 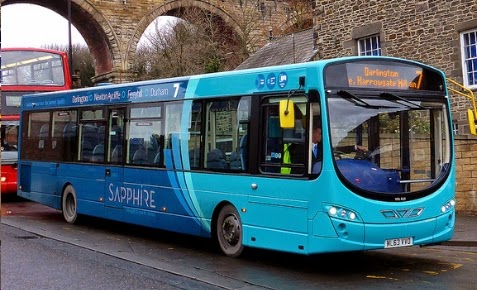 ... as here on the 7 between Durham and Darlington.