Today, we are going to examine one of the major changes in the First Bus network in Stoke on Trent. The new label is ... 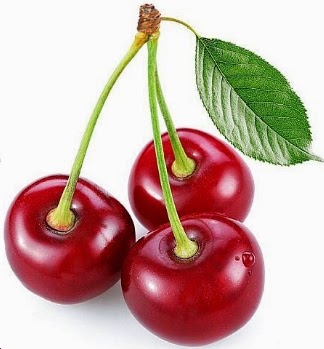 It's hard to know where to start. Maybe with what preceded the cherry.

First, route 20; Hanley, Kidsgrove and Crewe. This was one of the services for which specially branded buses were used post-privatisation when the route was numbered 320. 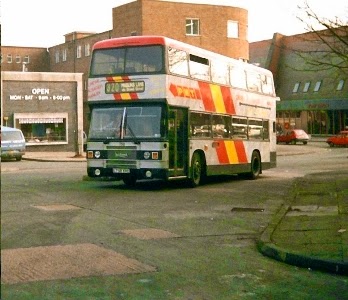 Its more recent manifestation has three buses an hour to Alsager with two continuing to Crewe. 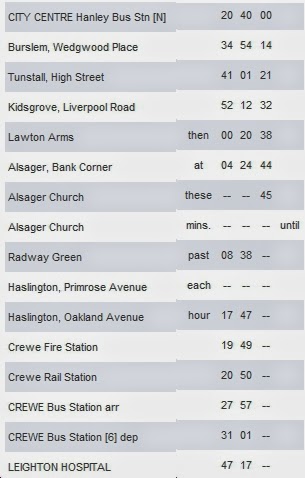 Annoyingly for through passengers, one sits at Alsager for ten minutes to allow an even 20 minute spacing to become an even half hour; far from ideal.

And here is a service 20, operated by the same bus as the 320 above, but now in plain First barbie livery! 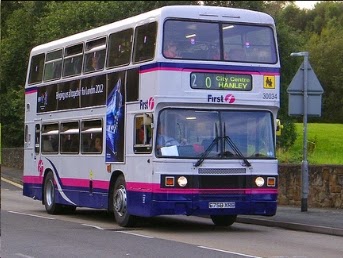 The 20A variant diverted to Talke and Talke Pits, two former mining villages near Kidsgrove.. 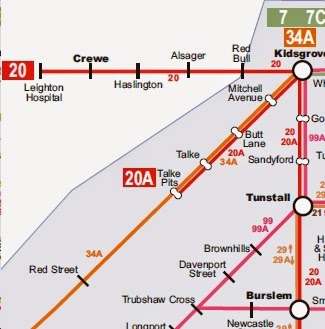 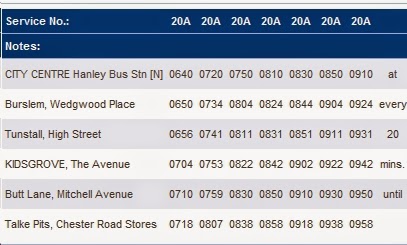 ... providing a combined 10 minute frequency between Hanley and Kidsgrove.

Renumber that all as 3 and you have the first piece of the Cherry jigsaw. 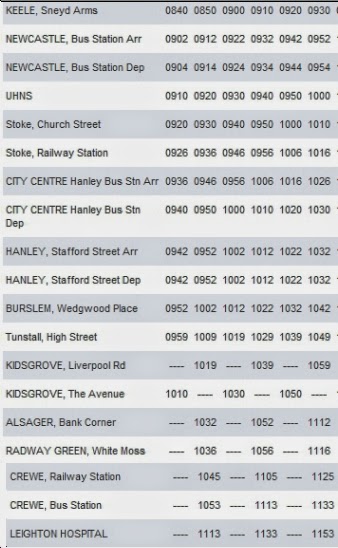 All three former 20s now run through to Crewe and the intervening 20 minute frequency terminates at Kidsgrove. Oh dear! What has happened to Talke and Talke Pits?

This is where the cunning plan of the Cherry line becomes interesting, clever from a scheduling point of view, but potentially baffling for the general public. 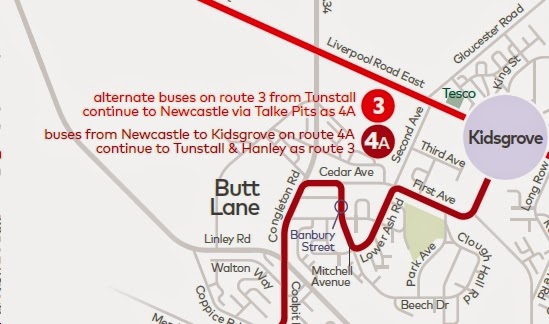 ... magically changing from one to the other at Kidsgrove.

Tomorrow we will see where the 4 has come from.

But there is a snag. Iris is not at all happy. 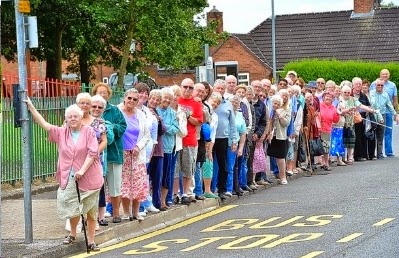 That's Iris, at the front of the queue; boy it is a very busy stop. Of course it hasn't been set up specially for the press photographer; of course not. The editor of local paper (The Sentinel) said, "You may well think that, but I could not possibly comment."

Pensioners claim plans to change two bus routes could leave them housebound. More than 50 people are appealing to First to cancel its proposed alterations to the 20A and 34A services which travel through Talke Pits. Both services currently stop in Chester Road, but this would be replaced with a stop along Monument Road. Dozens of elderly people, some who have been using the services for more than 60 years, fear without a nearby bus stop they will be 'isolated' or forced to spend hundreds of pounds on taxi fares.

But Iris is right; the routes in the area used to do a little wiggle via Chester Road ...

... and First Bus has withdrawn the wiggle. 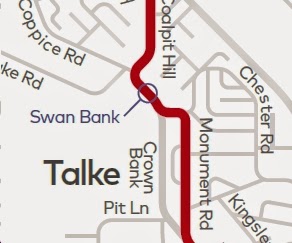 Presumably, if Iris's chums had travelled in as much profusion as is illustrated by the ever reliable fourth estate, then First Bus would not only have left the service in place; duplicates or increased frequency would be the order of the day!

One of the privileges of Island Life was the "abroad"-ness of that stretch of water. But it could also be a stressful part of a journey as well as an expense. It is significant that fbb ans Mrs have travelled around the UK much more frequently in the last year. 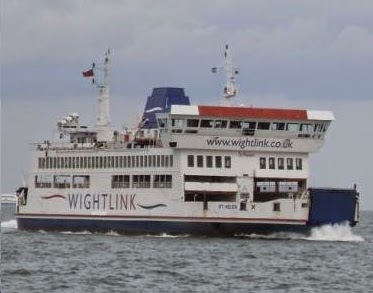 The boats all have what are known as "mezzanine" decks which allow two layers of cars to be loaded. Once loaded the "mezz" deck is hauled up on strings, quite thick strings one would imagine, leaving room for the bottom layer to load. In the picture above the empty mezz deck is the white bar below the left hand row of five windows.

Unfortunately, a few days ago one of the strings broke! The deck on the St Helen, the oldest boat in the fleet, dropped suddenly at one corner as the deck was being lowered; obvious from the picture below. 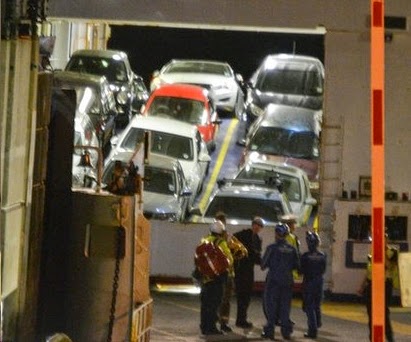 Four people were injured (whiplash?) and taken to St Mary's Hospital Newport. There was some damage so some of the vehicles. The lower deck had been cleared by the time the accident happened. 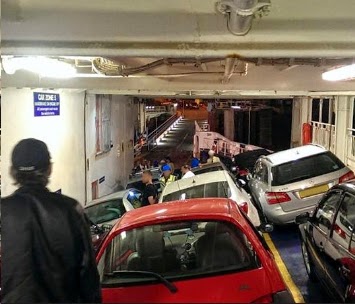 A full investigation by the safety authorities is under way. The emergency services attended promptly and all was cleared in 90 minutes. 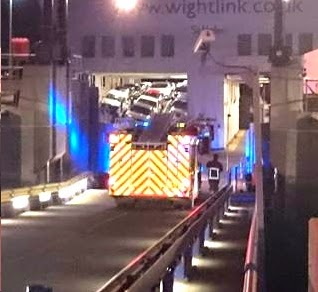 This particular class of ferry has been in service for 30 years with an excellent safety record.

Needless to say scaremongers are now booking with competitor Red Funnel because they don't want to travel on "dangerous" boats. Short memory applies. In 2006 one of the Red Funnel boats smashed into the loading ramp, damaging ramp, ferry and cars. 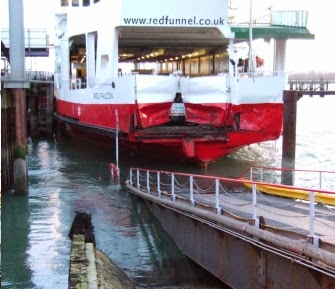 Note very buckled gates. In this case the fault was a combination of human error and misunderstanding as the vessel approached the terminal. Injuries were slight.

The fbbs never had any anxiety over safety but, in their dotage (?), don't miss the ferry - at all.

A return visit the see chums on the Island is planned for September. By ferry, of course. The fbb's helicopter is booked for its annual MOT.


Thanks to our senior** Island correspondent
for this news item.