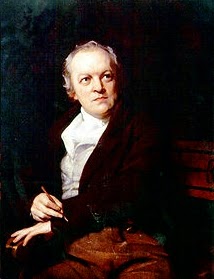 William Blake (28 November 1757 to 12 August 1827) was an English painter, poet and printmaker. Largely unrecognised during his lifetime, Blake is now considered a seminal figure in the history of the poetry and visual arts of the Romantic Age. His prophetic poetry has been said to form "what is in proportion to its merits the least read body of poetry in the English language". What is often overlooked is his forward-looking interest in public transport. His poetically expressed antagonism against the proposal by businessman Sir Raymond Stenning for a horse drawn "omnibus" branded "Leppard" (Leopard) actually formed the basis of a later and more well known work.


Leppard, Leppard, gold with spot,
What astounding pow'r thou've got;
What immortal hand or eye,
Could paint an omnibus, or try?

In what distant deeps or skies.
Burnt the fire of thine eyes?
On what wings dare man aspire?
What the hand, dare seize the fire?

And what motive, skill of penning,
Should inspire Sir Raymonde Stennyng?
And when hise heart began to beat,
What weird hand? Is't trick or treat?

Leppard, Leppard, gold with spot,
New omnibus thou just art not;
One gross they saye is what thou bee
Some man hath lower'd it unto three? 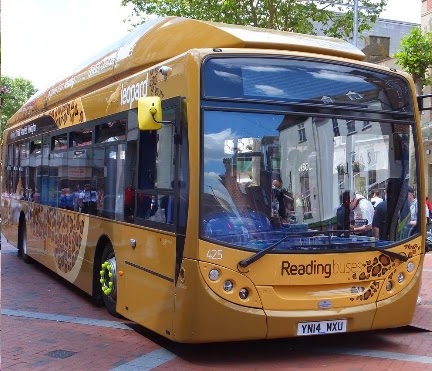 At the public launch, two brand new buses in their sleek 'leopard' livery were paraded in the Market Square next to the Town Hall and attracted much attention.

Amanda Rose, Marketing Manager of Reading Buses' 'Charity of The Year' Launchpad was present at today's launch and said: "It's great to be able to raise the awareness of the Launchpad brand in the Wokingham area through the on-board information screens on the 'leopard' buses." 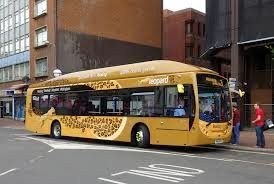 James Freeman, Chief Executive Officer of Reading Buses said today: "I've been looking forward to this date for a long time... a very long time. This is effectively a new route for Reading Buses."

Of course Stenningisation is not just about the vehicles. It's about the whole brand. Maps ... 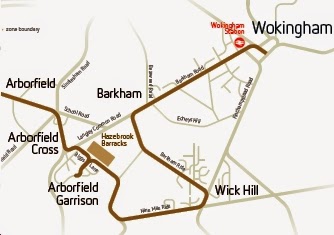 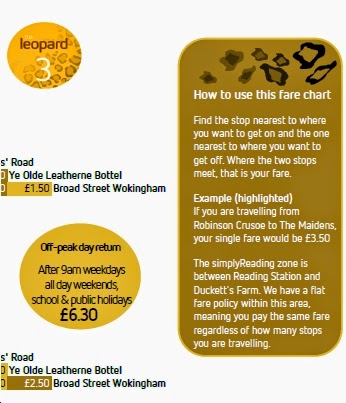 But: belay that order, Jim; hold that hype.  "This is effectively a new route for Reading Buses"  Not quite, Cap'n James. Back in 1999 your Reading Buses predecessors ran a bus service to Wokingham, numbered 144. Here it is in the Great Britain Bus Timetable.

It was later operated by Tillingbourne, and it its most recent manifestation was as a Thames Travel service. 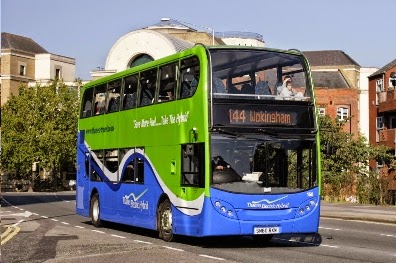 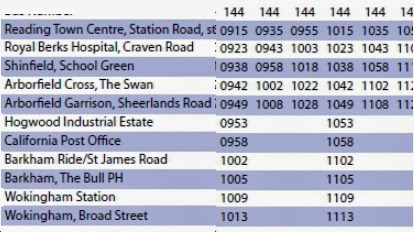 Whilst the Leopard route 3 has a sort of familiar face about it.

What has happened is that the most recent 144 was a tendered service. Reading Buses offered to "have a go" at running it commercially and, being Reading, the "have a go" involved making a really powerful marketing splash. Let's hope it works and the former marginal 144 becomes a commercial success as Leopard 3.

The species' success on the road is in part due to its opportunistic hunting behavior, its adaptability to habitats, its ability to run at speeds approaching 58 kilometres per hour (36 mph), its unequaled ability to climb hills even when carrying a heavy load, and its notorious ability for stealth. The leopard consumes virtually any passenger that it can hunt down and catch. Its habitat ranges from Reading to Wokingham.

[Description of "Leopard" as (not quite) written on Wikipedia! Look it up for yourself.]

As might be expected there is a leaflet for each of the fruity routes (separate editions for the Cherry 3 and Cherry 4), each with a route map and summary of fares products, but with no detail of individual one-off fares. 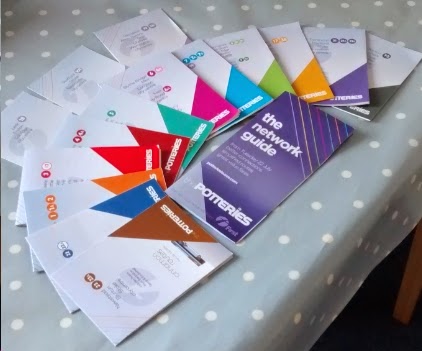 The bland three (top left) are for the three unbranded inter-urban services to Leek (18), Uttoxeter (32) and Stafford (101).

The network guide is disappointing. The map is too small and the frequency guide, as well as having little or no practical value, is also unhelpful to all but the possessors of superb visual acuity.

How much nicer it would have been to have the whole lot in a timetable booklet. There is one slight sign of sense of the common variety. There is a phone number ...

... for Potteries Buses; good. Daftly, the web site says that it will only be used until 4th August. It never ceases to amaze fbb that bus companies are happy to hand over one of their most important marketing channels, namely the phone, to remote and ill-informed call centres. Imagine this notice at Tesco.