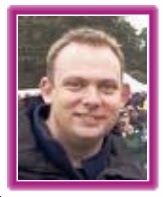 Phil Stockley's Velvet Bus, running services in the Eastleigh area, is no more.

fbb hopes to report on what happens to Velvet's services as soon as possible. 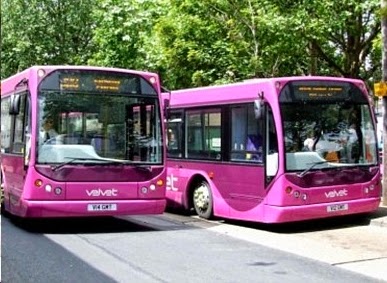 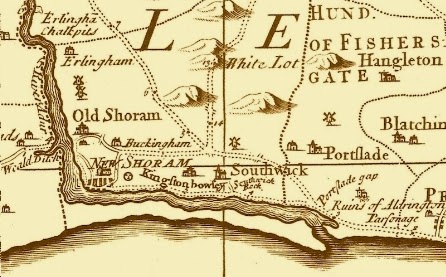 ... inland from the coast and, presumably, linked to Lancing by a ferry across the River Adur. New Shoreham developed around the deeper (but tidal) water and eventually gained the label "on-Sea" - which it isn't!

At the same time there were signs of development at Brighthelmton (sic!) to the east but Hove remained little more than a hamlet! 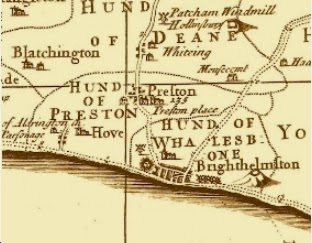 The river and harbour at Shoreham became one of the most important along this stretch of the South Coast. 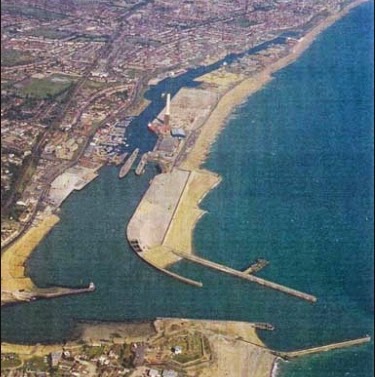 In the 1850s a new channel to the sea was dug about half way along the shingle bank and the eastern end became a proper harbour with a lock gate entrance.

The port is still active today.
As usual, it was the arrival of the railway which caused to town to expand dramatically.

The original Shoreham station was a terminus built by the London and Brighton Railway and was opened on 11 May 1840, and as such it is one of the earliest stations to open in southern England. The original building was demolished in 1845 when the Brighton and Chichester Railway opened its line to Worthing railway station. Both railways merged with others in July 1846 to become the London Brighton and South Coast Railway which progressed westwards to Portsmouth.

The Brighton and Shoreham Tramway operated a tramway service in Shoreham between 1884 and 1913. 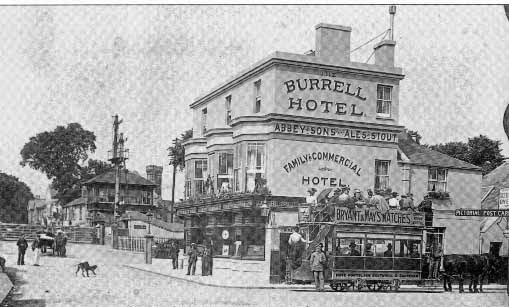 Today buses still stop opposite what was the Burrell Hotel. 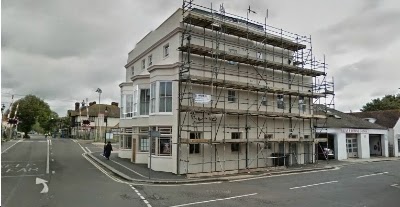 But while Mrs fbb took a tour round the shops, the chubby one was ensconced at the "Footbridge" stop on Shoreham High Street. 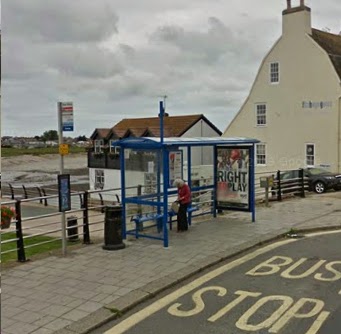 And there was plenty of public transport information available at the stop.

Firstly, look at the "flag". 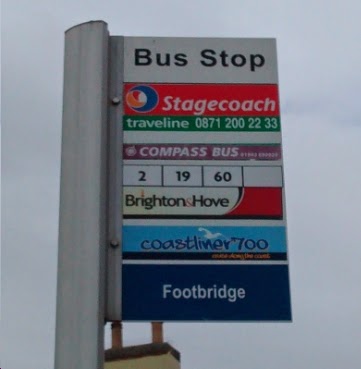 Presumably I ring 0871 200 22 33 for Stagecoach information.
But Stagecoach doesn't seem to run any of the bus routes.
How do I contact Compass Bus?
Compass appears to run three of the routes.
What is Brighton and Hove?
Is that a bus company, or the local council?
Do they have a phone number?
Likewise there is no contact for the Coastliner company.
Is the 700 some sort of special bus, i.e.express?
The only reasonably certain information is "Footbridge" ... 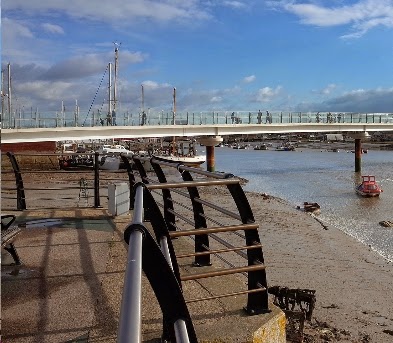 ... which we can see, right next to the stop. That's why Traveline (etc) call the stop "Crown and Anchor"; you wouldn't want consistency, now, would you? 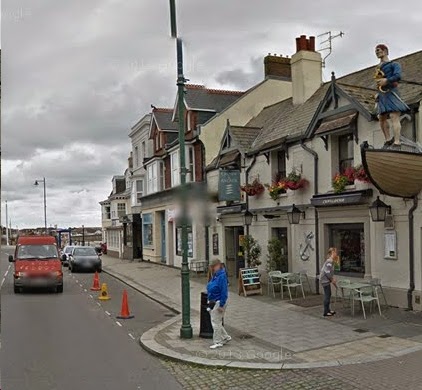 It's all a bit confusing. But there's more stuff in a frame at the back of the shelter. Where to start?

There is only one all-day timetable. 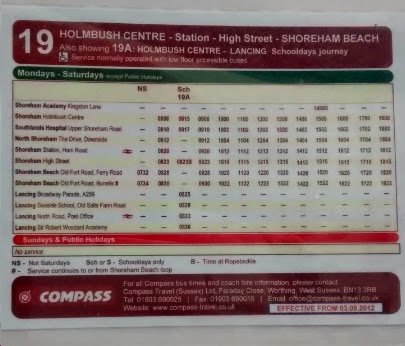 But there are some maps ... 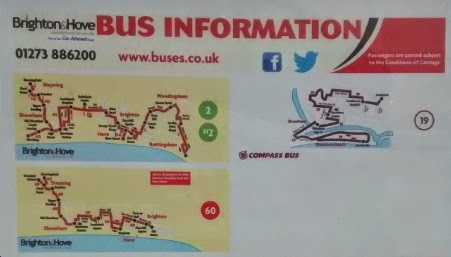 ... which cover the three route numbers on the flag. 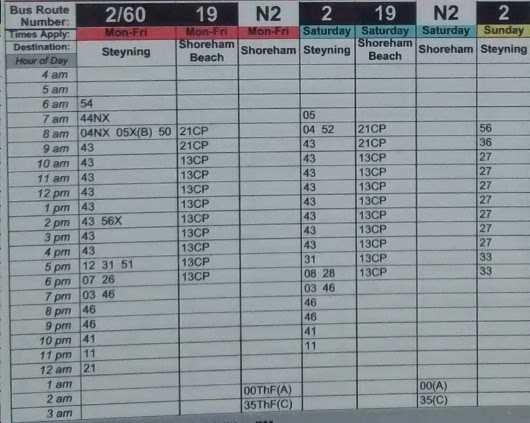 ... which tells me that the N2 (on map but not up the pole) goes to Shoreham, one stop down the road. But no 700; it must be very special. This independent quality provides a separate departure list for the 700 ... 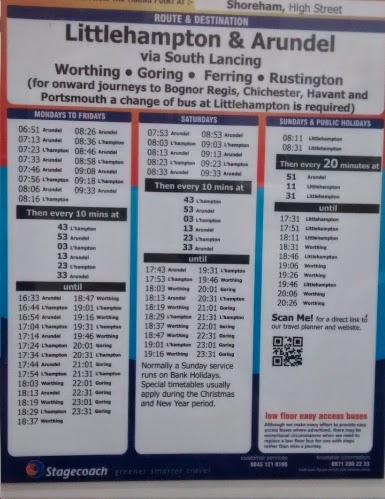 ... which says it goes to Littlehampton and Arundel. Are they close to one another; the route number appears to be the same for both. And there is no 700 map to help us. Nor is there anything "express" or "special" about the 700; but it does run every 10 minutes. Why it gets no mention on the "Brighton and Hove" list and map poster is a mystery. It couldn't be, surely, that between Shoreham and Brighton it is twice the frequency and much faster (30 mins) than Brighton and Hove service 2 (50 mins)?

But the buses say they go to Chichester and Portsmouth ... 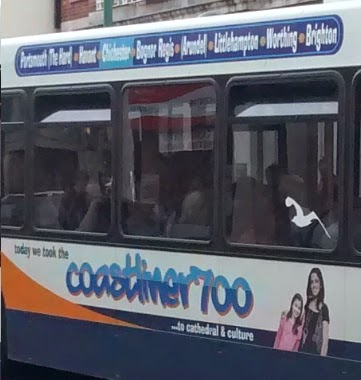 ... and from some of the vehicles spotted (but by no means all of them) we can glean that "Coastliner" is a brand name and not a separate company.

And, finally, on the board but not on the flag ... 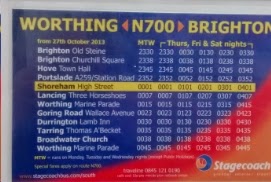 Then there is a real time display and, at first, fbb despaired. As usual the screens did not reproduce on the phone-camera, so your photographically challenged blogger has had to create some hand crafted versions.

These will appear tomorrow; and the fbbs take a bus ride to Steyning. 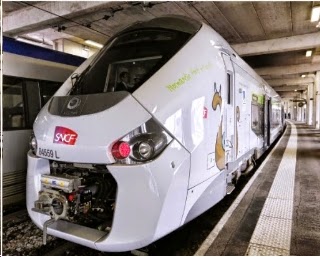 France’s national rail company SNCF said on it had ordered 2,000 trains for an expanded regional network that are too wide for many station platforms, entailing costly repairs. “We discovered the problem a bit late, we recognize that and we accept responsibility on that score,” Christophe Piednoel (chief of French equivalent of Network Rail) announced.

Following the above much reported story, the French Press has revealed another "size matters" problem, this time with the Paris Metro. 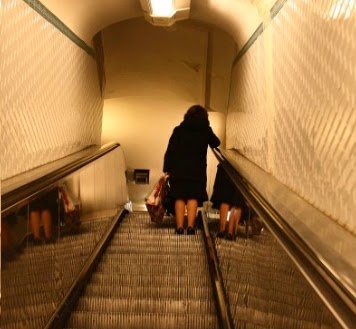 Around 30 recently installed escalators in Paris Metro stations will need to be replaced because they are too wide, in an embarrassing blunder set to cost millions of euros to fix, transport chiefs admitted to a French newspaper recently.

The infamous escalators, installed less than ten years ago, feature stairs ten centimetres wider than those normally used on the city’s metro system. The state-owned Paris public transport operator RATP had incorrectly thought that this would help boost capacity. But it now transpires that the stairs are simply too wide to fit properly into the pre-existing spaces allotted to them, causing regular malfunctions.