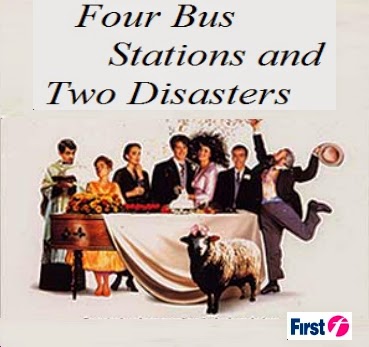 Just a week ago, fbb was completing his two (and a bit) day investigation of First Kernow (Cornwall) bus services. The main thrust of Day 2 was a longer distance tour, riding on some of the less frequent inter-urban services and examining the information available to the public at interchange points.

It was not a good day for First.

We begin at Penzance itself. It is a neat and tidy sawtooth arrangement but with very small notices (in a standard bus stop frame) listing which services left from which stand. There were no timetables on display at all; although the previously mentioned books were available in the travel shop. If  the office was closed and you did not have a booklet only computer generated departure lists were on offer. 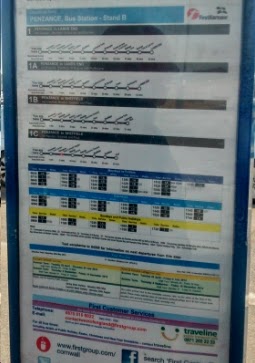 These are fine if you know what you want but almost useless if you are a visitor or occasional user; but, progress from Cornwall Council:-

There was one "real time" display which showed only timetabled time, simply an electronic version of the lists at the stop. This offered information on services 17 to St Ives and 18 to ...

... Camborne. Was this a short working? The buses showed Truro on the destination display, but the departure screen resolutely and firmly told you that the bus was only going to Camborne. Please don't add comments about databases, computer systems, DfT advice and program compiler Albert's lumbago. It is unnecessary and just plain daft to give wrong information.

But, as usual on these systems, times (e.g.1033 Camborne) disappear; the 1033 bus comes in late and leaves at 1038 unannounced. Meanwhile passengers may have wandered off under the mistaken impression that their bus has already gone and they need to wait until the 1103. If it were real real time, the screen could be programed to say 1033 Truro, due 1038. But it can't and it doesn't.

fbb's plan was to catch his usual service 1A from  the digs, arriving at the bus station at 1037 and hop on town service 11 ... 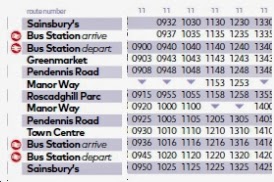 ... due out at 1040. If arrival looked a little tight, no problem, hop off at the Greenmarket stop (1043 for the 11) and bob's your uncle. Only the incoming bus was 10 minutes late meaning that fbb saw the back end of the 11 disappearing in the distance as he was held, frustratingly at a set of traffic lights.

Not quite a disaster but disappointing none-the-less. Nothing for it but to sit at the bus station and watch the world go by until the 1140 service 39B to Camborne set sail. 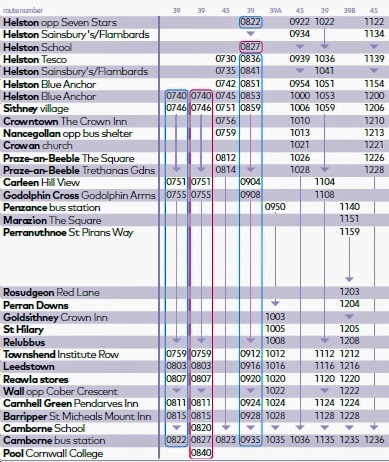 The pages in the new timetable book for the 39, 39A, 39B and 45 must get the prize for the most incomprehensible set of times in the western arm of our galaxy. The 39 (etc) map is a little more helpful, but, as fbb discovered, not very accurate. 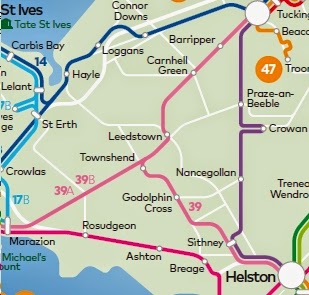 It shows the service 39B as running from Marazion direct to Townshend. It doesn't! It does a double run to the village of Perranuthnoe (called, unhelpfully "St Pirans Way" on the Traveline map) ... 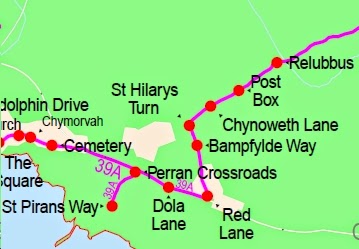 ... it turns left at Red Lane which First claims is Rosudgeon which it isn't; quite. The route then dog-legs back to St Hilary, wrongly labelled "St Hilary's Turn". The 39A, by the way, does run direct as shown but also omits Marazion as not shown! Public transport information is so good! But back at Penzance bus station, fbb was, as yet, unaware of these subtle delights.

Also waiting with growing frustration was a party of eight walkers aiming to get to Relubbus thence walk to Hayle via the Country Park along the river. 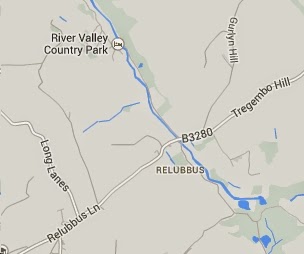 They waited. And waited. And waited. 1150 became 1210. Eventually the bossy one went into the enquiry office. "He's having trouble with the bus; he's at Marazion and the fitters are here in their white van waiting to have a look," was the reply she brought back to her colleagues. Actually the white van belonged to the gang who were upgrading the toilets!

The walkers decided to walk along the coast. 8 lost fares!

Eventually the driver arrived as a passenger in a double deck bus, toddled over the what turned out to be a spare Dart, set up service 13 in the screens and left with two passengers (one was fbb) 53 minutes late. At no time did any member of First's staff bother to come and tell the remaining waiting passengers what was happening. DISGRACEFUL, 0 out of 10. Not disgraceful because things went wrong, but disgraceful because nobody bothered to explain. 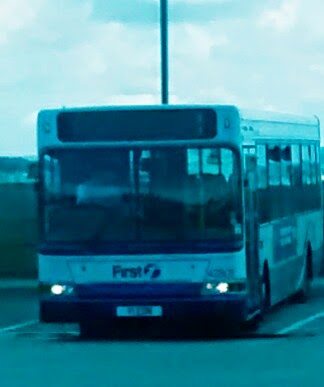 
Why service 13? The hassled driver couldn't find 39B; or, more likely, it wasn't progammed on this particular bus. 13 was the old route number.  Thus develops disaster number one.

The original plan was to catch the 39B to Camborne, then the 47 from Camborne to Troon, then ride the whole route 47 service from Troon to Truro.

This would be more interesting than the main line route 14/18. But we were still about 50 minutes late ... 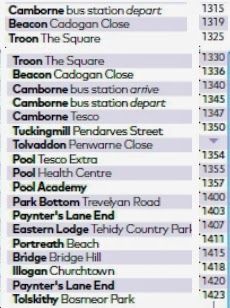 ... and passed the 1315 47 as we approached the bus station. 25 minutes to enjoy the facilities at Camborne then pick up the planned schedule at 1340. Not a total disaster, but disappointing nevertheless. Will fbb ever visit Troon? Unlikely. But it looks a nice place. 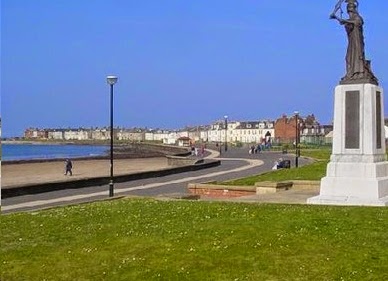 OK, wrong Troon. The one with the sea is in Scotland. This is the Cornwall settlement:- 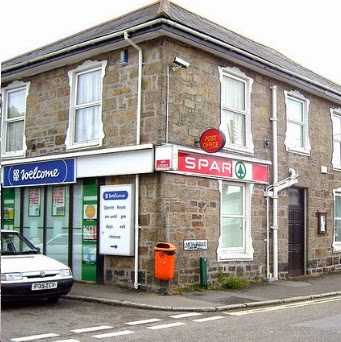 fbb's delayed service 39A and missed service 47 (Camborne to Troon section) were similar routes to those originally operated by the local company Grenvilles. 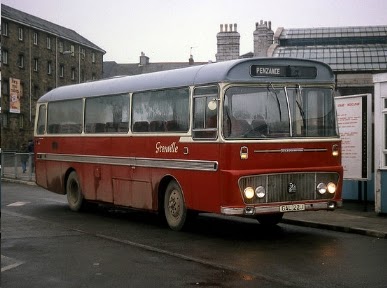 Grenville became a wholly owned subsidiary of competitor Western National in March 1988. The fleet comprised thirty three vehicles at the time. Full consolidation came in April 1989 with the services being integrated into, and operated under the name of, Western National, with the Grenville name disappearing from the sides of buses after forty-one years.

But now fbb must reveal his enjoyment of the lavish facilities at Camborne bus station.

It's what is called an "Oh Dear" moment!


Four Bus Stations and Two Disasters
will continue next week