Somerset's county town has been beset by road works causing untold chaos in the town centre.

Messages like the above have been a regular feature of the Buses of Somerset web site for weeks and weeks. The guilty party is Wessex Water.

Operation Clean and Clear is our £16million investment scheme to modernise ageing water mains in Taunton which are very old and have occasionally led to local people receiving discoloured water. Although discoloured water isn't harmful to health it is essential that we bring our water supply network up to modern standards to improve water quality. To do this we are replacing, relining or cleaning more than 50 miles of water mains, using innovative construction methods such as relining mains from the inside, which will help to minimise disruption. The scheme is due to be completed this mid-September this year.

And the company does try to keep their customers informed and involved.

Come along to your nearest sewage treatment works for a fun and educational experience for all the family. It’s completely free. Our expert sewage operators will be providing tours around the works and they’ll be on hand to answer any questions you may have about what happens after you flush.

After his recent "procedure" at Axminster Hospital, fbb can't wait to join in the fun!

But he was not at all surpised when his 1105 service 30 from Taunton did not arrive at its scheduled 1058 at Axminster Station. Anxiety did, however, increase when nothing had materialised by 1115. 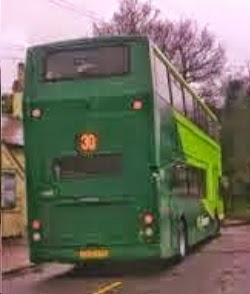 An equal delay on the return run would make the old bloke late for his first meeting with the Cornwall timetable team; not fbb's fault, maybe, but hardly an auspicious start. The bus arrived at 1117 and, ignoring his scheduled 7 minute break, the driver started loading immediately. Good house point! The bus departed at 1120, some 15 minutes late.

The bus then set off at a "determined" and "positive" rate. By Chard some time had been recovered; by Illminster, even more. Service 30 then runs non-stop from there to Henlade, just outside Taunton. On this stretch it was verily "pedal to the metal" with an occasional ralentando brought about by slow-driving motor cars! More time had been recovered by Henlade and things look hunky (almost dory) as Taunton itself was approached along Ilminster Road.

At the junction of East Reach and Hurdle Way ... 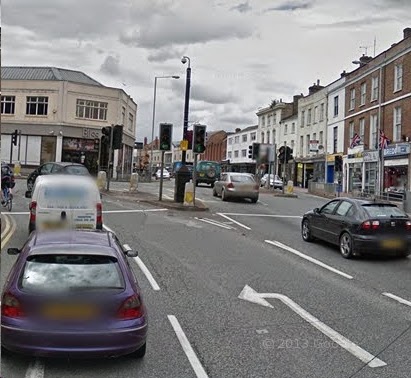 ... buses continue conceptually straight on along East Street, but are obliged to treat it as a right hand turn controlled by the lights. 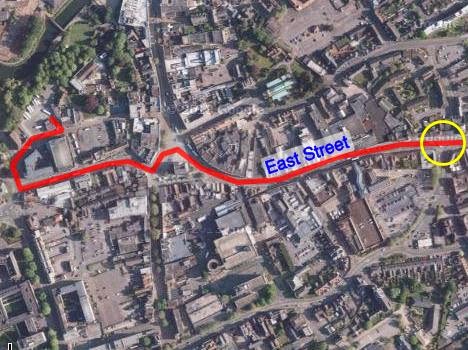 As the service 30 decker approached the junction, fbb noticed two things of concern; (a) a "diversion" sign for access to East Street, and (b) a walkie-talkie equipped man in high-viz jacket standing in the middle of the westbound carriageway.

The diversion was not huge but did appear completely unnecessary. 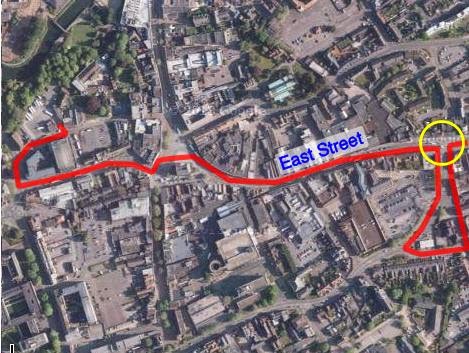 "The road's closed" said the man in the dayglo yellow weskit, "you can't go that way". "Which was can I go?" pleaded our driver. "No idea," responded the helpful man. Had he positioned himself closer to the junction he might have advised the traditional "EastStreet is closed yet again" option. 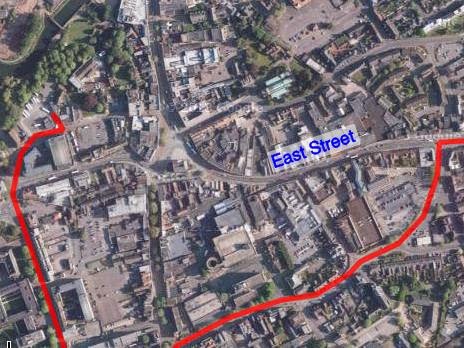 But he wasn't and he didn't. Of course, by now fbb's service 30 was facing in the wrong direction, out of town and back along East Reach; hardly ideal for a bus station arrival!

Our splendid driver used his initative and local knowledge ... 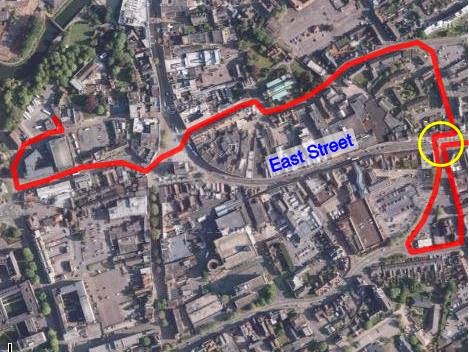 ... and diverted via Tancred Street, Duke Street and Hammet Street to regain his route at Taunton Parade and thus onward to the bus station.

Despite this shambles, the driver had made up even more time by the time he came to a stand just alongside the bus station caff. fbb will not reveal how much time was recovered because, if he did, the bosses at buses of Somerset might seek to trim the schedules even further. Suffice it to say that el chubbo had time for a sarnie, a cuppa, a PNB and a goodly bit of personal recovery time before entering the fray at 1300.

It was only when fbb got back to sunny Seaton that he discovered the source of this particular "problem". And this early afternoon delay was not the fault of the water company.

But not just any road closure ...

Gulls or seagulls are seabirds of the family Laridae in the sub-order Lari. They are most closely related to the terns (family Sternidae) and only distantly related to auks, skimmers, and more distantly to the waders. An older name for gulls is mew, cognate with German "Möwe", Danish "måge", Dutch "meeuw" and French "mouette"; this term can still be found in certain regional dialects.

So this seagull was trapped in some way and a huge Fire Brigade rescue tower was brought in to recover the sad dickie bird. It was this that had blocked East Street. 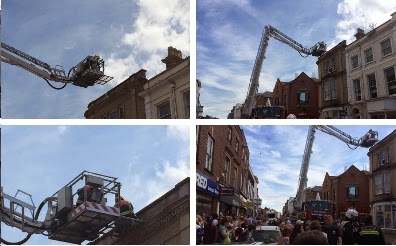 Duly boxed and safe the seagull was taken away by the RSPCA for enforced convalescence. 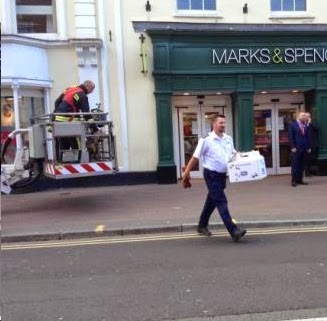 Apparently the crowd applauded vigorously as the deed was done; fbb is not sure that such an enthusiastic response was to be experienced in the offices of Buses of Somerset! There is no record as to whether the bird recovered or, like Python's Parrot, whether it became as late as the majority of Taunton's buses.

But as for fbb's driver, the boy done good!

Although not particularly relevant to Thursday's near roller-coaster ride, this was also fbb's first trip by service 30 back from Taunton to Axminster, a journey with no delays at all. What the homeward trip did reveal, first hand, was the huge challenge that traffic management systems can bring to the hard-pressed bus company.

Here is Chard, with the 30 route superimposed. 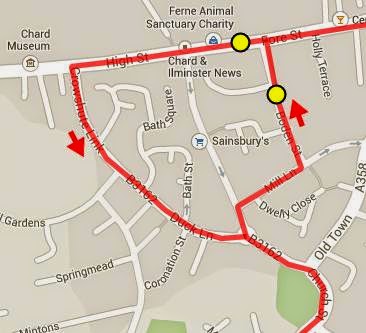 Extra mileage southbound, but at least the main town centre stops are reasonably close together, on or near Boden Street. But now go to Ilminster. 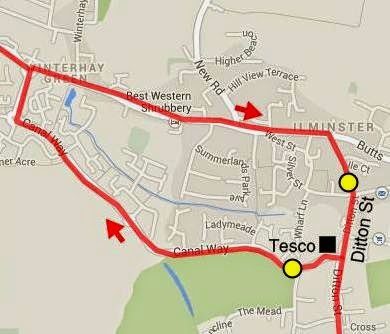 When the narrow Ditton Street was made one way southbound, traffic from the south was condemned to a massive diversion via Canal Way. There is no way through unless you take the equally massive double back. Passengers for the traditional (and attractive) town centre ... 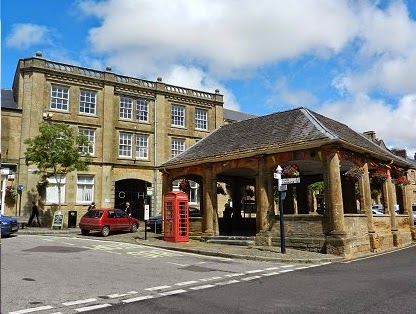 ... have no choice but to alight at Tesco and walk through. What is worse, there is no obvious way through to West Street and High Street (the "top" road) from anywhere else on Canal Way; the Shudrick Brook being an impenetrable barrier.

And the meeting? Whilst the aim of any bus company is to make profits for its shareholders, this little meeting of lowly souls in the First Bus hierarchy revealed how much things have moved on in Cornwall since Fearnley took the reins. The mood was entirely positive; with an over-riding desire to improve information for the public. The recently produced timetable book is only a first step; far from perfect but already being reprinted (with corrections!). fbb hopes to reveal significant improvements for the Autumn edition.

First Aberdeen wins Award
First Aberdeen's Platinum Service was named Scotland's "Best Bus Service" at last Thursday night's (19 June) Scottish Transport Awards. The service, which was launched in November 2013, is already attracting around 5% more passengers on board after First improved almost every aspect of the service.