Not a Circular, but a Lollipop!


At a first glance, there are only three buses each day on service1 from Penzance to Sennen Cove.

The other route, 1A via Porthcurno, apparently offers seven trips to Lands End only (two are on the next page of the timetable book); which seems a bit unfair on Sennen Cove, arguably a more pleasant and less grot-garnished destination than Lands End ... 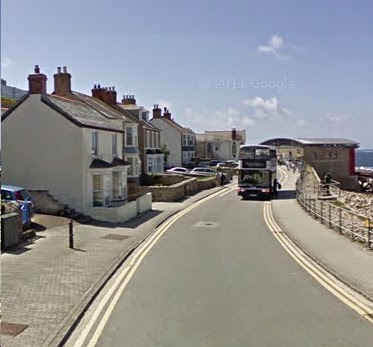 ... and famous for some terrifyingly huge seas. 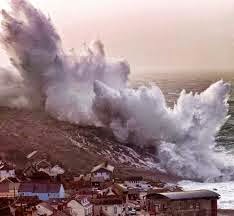 But these aren't the only trips to Sennen and its eponymous cove. The routes 1 and 1A operated as a "lollipop" with many 1As turning to 1s at Lands End and continuing via Sennen and back to Penzance (and vice versa).

Way back in 2010, fbb write a blog posing the question, "What is a Circular" (read again). The 1/1A is a lollipop shaped route.

So it is that four more journeys will get you to Sennen as per the blobs shown below; simply sit tight at Lands End and you will arrive at the Cove in about 10 minutes. To discover these extra journeys, you have to look at the timetables from Lands End to Penzance. Nowhere is this made clear.

And there's a fifth through trip on the next page. Again we ask the question, "will tourists and occasional visitors grasp this subtlety of this service?" fbb doubts that they will. This service has been unchanged for many years; herewith a 1995 winter version from the Great Britain Bus Timetable ... 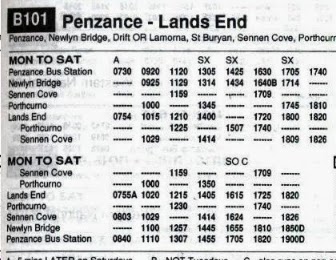 At least the GBBTT admits to "both ways" to Sennen Cove!

One obvious solution to wierdness of the ones  is to remove the more local 1B and 1C service from the current complicated pages; remove them and renumber them. This would, at least allow a more manageable version of the 1 amd 1A. 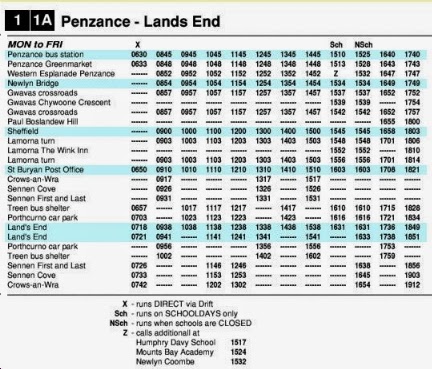 The 1/1A and 1B/1C pages are separate on First's web site but made even more confuddling by the silly computer driven layout. 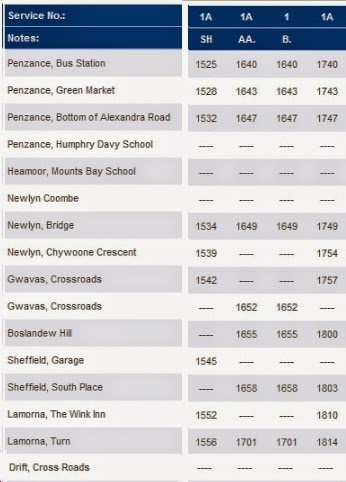 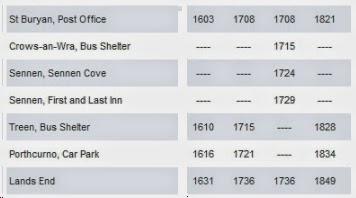 We have Gwavas Crossroads twice, we have two Sheffields and a mysterious Boslandew Hill (which is, as we all know, the timing point in Paul.) The tables are very tall which means that it is easy to ignore the column heading notes, most of which refer to dates of operation. The service reduces sugnificantly from 1st September. So the unwary can find their bus not there! There is no attempt to show journeys that run "through" Lands End BUT, at least 1Bs and 1Cs are on a separate but equally complicated table. To compound the confusion, those 1/1A journeys that are diverted via Paul and Lamrona are not shown on the 1B/1C table!

Penzance to Lands End just seems fated to be a mess. fbb has looked at a major rethink ... 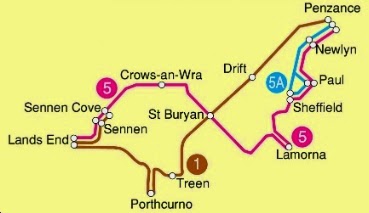 ... even attempting to match frequencies to today's pattern plus a little enhancement allowing a bit more tourist-related marketing.

But scheduling would be difficult as neither the imagined 1 nor the imagined 5 would fit neatly in to a two hour round trip. Maybe the extra cost of a less efficient timetable design might be recouped by extra passengers who could understand the whole caboodle more easily? fbb expects a polite snigger (but understandable because chunks of the timetable are paid for by Cornwall council and he who pays the bus company piper, calls the timetable tune!) from the First Bus management; indeed, by the time this blog appears they will have sniggered!

But only a few months ago, buses to Paul and Lamorna were numbered 5. And why, pray, have First renumbered the 5s as 1B and 1C? Because it was "requested by Cornwall Council". See reference to pipers and tunes above. 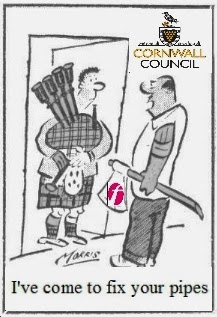 You might just wonder whether the Councillors or their officers who contrived this curious and convoluted combination could explain the timetable to a group of visitors. 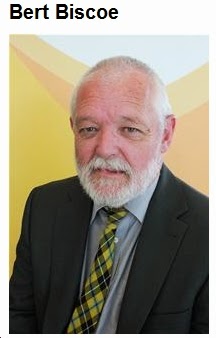 I'm Bert Biscoe and I am the Independent Cornwall Councillor for Truro (East). I was elected to Cornwall County Council in 1997, and now serve on the new unitary council.. Since 1997 I have devoted my time to representing the community of Truro, and the broader community of Cornwall. I served as a cabinet member for both Environment and Corporate Resources on the former County Council. In October 2012 I was elected to a cabinet post and currently hold the Transportation Portfolio

Maybe someone should ask Bert. Despite these niggles, and in the interests of even-handed journalism, fbb should report that it seems that relationships between First and the Cornwall council are excellent with mutual respect and understanding; even if the Council is wrong about the 1B and 1C!!!

Yesterday, fbb attended his first "face to face" meeting with the Cornwall timetable team. It would be unprofessional in the extreme to publish any discussion from a private and possibly commercially sensitive meeting. But the journey there was "interesting" and fbb may allow himself a little musing about First's future filosophy for their Cornwall business. As far as the journey is concerned, fbb found himself (indirectly) in a tweet! 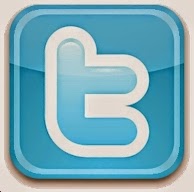 As will be explained tomorrow. Which also means that "Ghastly Google Gigo (1)", erroneously published earlier this week, is delayed.

Next bus blog : Saturday 21st June
Posted by fatbusbloke at 02:00