Next Stop America : A Look at Land's End

Land's End (Cornish: Penn an Wlas or Pedn an Wlas) is a headland and holiday complex in western Cornwall, England. It is the most westerly point of mainland Cornwall and England, is within the Penwith peninsula and is about eight miles (13 km) west-southwest of Penzance at the starting and finishing point of the A30 road. 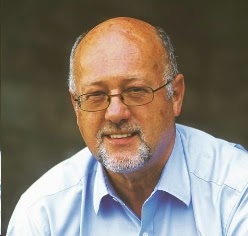 In 1987 Peter de Savary purchased Land’s End for almost £7 million from David Goldstone. He had two new buildings erected and much of the present theme park development was instigated by him. He sold both Land's End and John o' Groats to businessman Graham Ferguson Lacey in 1991. 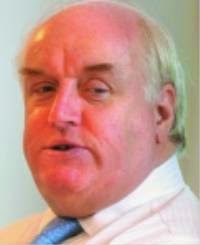 He was declared bankrupt! 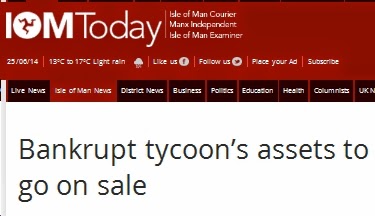 They also own other sites.

... which looks beautiful from a distance but, close to, reveals itself as something altogether different. 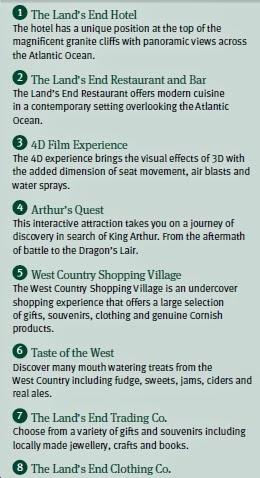 fbb's 1740 journey is a portmanteau working, including diversions to Chywoone estate at Newlyn and Lamorna-not-quite-the-cove. See "Is it Nuts? Or Necessary? [3]" (read again). Because of these variations to a standard 1A, smaller buses are essential. Here is fbb's Optare "waiting time" at its outer terminus. 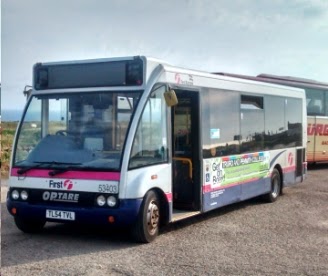 Whilst no single journey is typical, herewith passenger numbers between Penzance and Land's End. 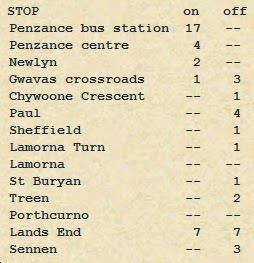 Readers may like to go back to the "anonymous" comment and draw their own conclusions. On the return trip, two locals boarded in Newlyn and everyone travelled on to Penzance centre or bus station. The journey was uneventful, if you choose to ignore the eight times the bus was hampered on the narrow roads, our driver occasionally frustrated by car drivers' inabilility or unwillingness to reverse into a passing place! The best (or the worst) was at St Buryan, where, approaching the junction on a narrow bit of road with parked cars ... 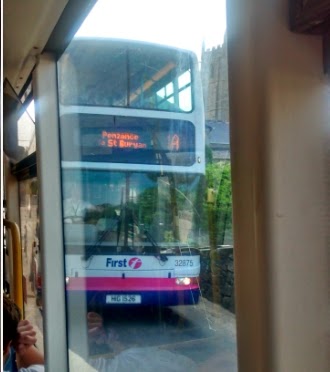 ... we met the 1A coming in the opposite direction. This time the Optare had to reverse; 200 yards! What's known in the trade as "a coat of paint job"!

Our readers may wonder what seven good folk were doing travelling TO Land's End when all facilitiies were closed or at least closing. The answer was this:- 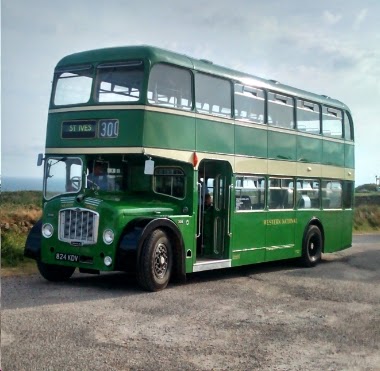 Once upon a time, First ran service 300, open top, on a mega circular from Penzance to Lands End, along the coast to St Ives and back to Penzance. But this year, Cornwall Council decided to "save money" by dubbing this service as "for tourists only" and thus outside the old fogey free ttavel scheme. First's innovative response (innovative, but probably doomed) was to provide a shortened 300 from Lands End to St Ives, operated by vintage buses charging a fiver for old fogeys. Open top buses, we are told, will run on "most" 1 & 1A trips and on the 17B from St Ives back to Penzance. (and vice versa, of course) 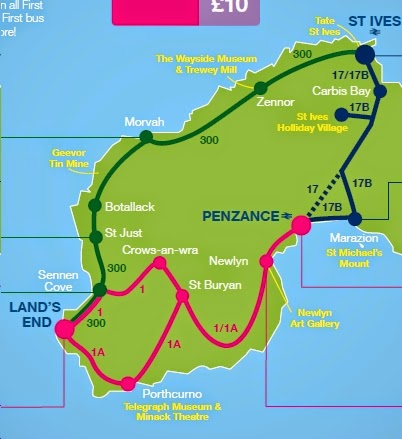 It was this trip which took the 7 alighters and provided six of the seven returners. It was the last of a modest three trips a day. 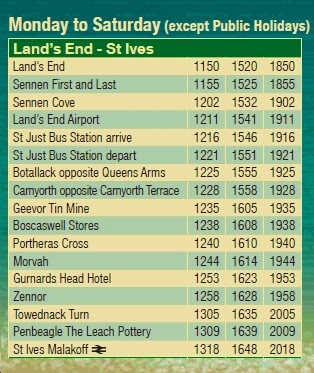 fbb thinks that the service will not survive after the current season; so a big raspberry to Cornwall Council for saving an insignificant bag of pennies from the bus budget by removing a popular facility aimed at the county's essential tourist market.

And another raspberry for First for leaving all the wrong bus stop flags in place. 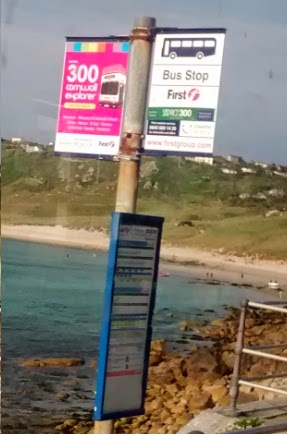 The pink sign refers to the now-withdrawn "circular" 300; the minute green sticker on the ordinary "flag" has the uninspiring logo of its replacement. Even the stop on the esplanade near fbb's gaff was equally misleading ... 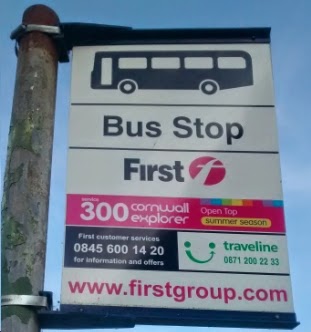 ... as the 300 no longer runs through Penzance. You would have a long wait! Could fbb suggest a little bit of remedial work from the "route equipment" department. Oh, sorry, he was made redundant last year?

Despite these "concerns" fbb can thoroughly recommend this batch of services; BUT, well aware of anonymous's admonishment, fbb still reckons the whole caboodle needs a thorough re-think

Ironically, back in the mid 70s, Western National ran service 501 to Lands End via Drift and service 504 via Lamorna to Porthcurno only. Very similar to fbb's proposal. But way back then Land's End did not enjoy the plethora of tourist enjoyment that it provides today. 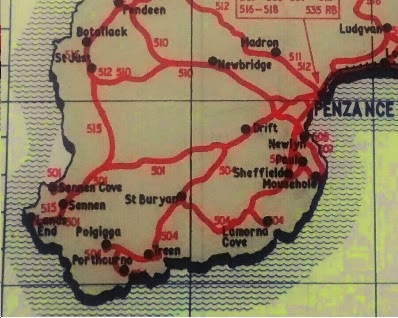 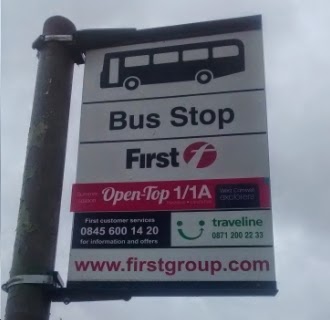 Not bad chaps. Only a month late! The services changed on 24th May.

Next bus blog : Saturday 28th June
Posted by fatbusbloke at 02:00