Over the summer our travel shop in Penzance bus station will be open at the weekends. Saturdays: 0900 to 1430 and Sundays 0930 to 1330. Both days the travel shop is open for bus service information only. We are unable to sell tickets or handle National Express bookings and enquiries on the weekends.

Hmmm? Better than nothing; but still a bit feeble.

The above comment is quite right. There are three routes out of Penzance exactly as outlined above. 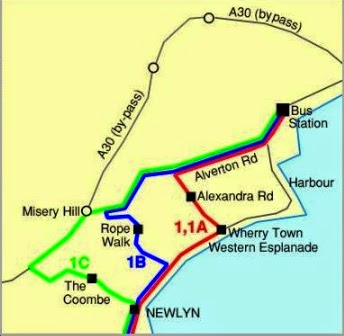 But things get more confusing when variations at school times are contemplated ... 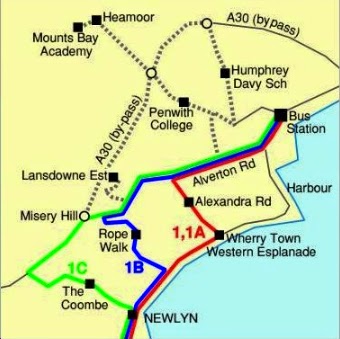 ... the collection of dotted lines in the map above. All three come together in chummy embrace at Newlyn, here to be precise at the bottom of The Coombe. 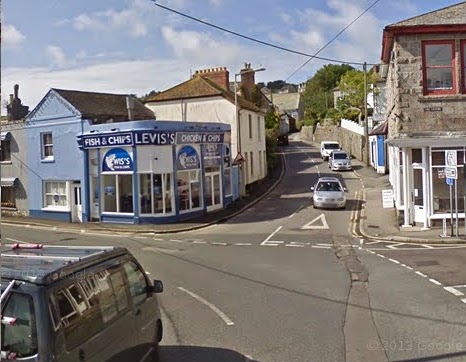 All four service 1 varieties go straight ahead up Chywoone Hill whilst service 6 bears left to Mousehole (pronounced "Mowzl"! with the "ow" as in "ouch"). "Newlyn Coombe" is the right hand here, although the road is simply called "The Coombe".

This was the junction (The Newlyn Bridge time point) where some spectacular seas were filmed during last February's storms.
Flooding from the Newlyn river is not uncommon. 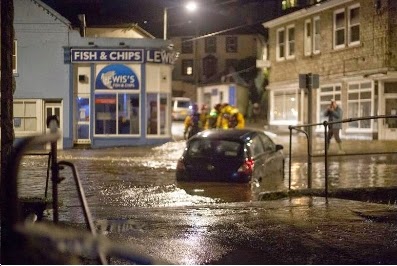 We can see the Penzance variations in this extract ... 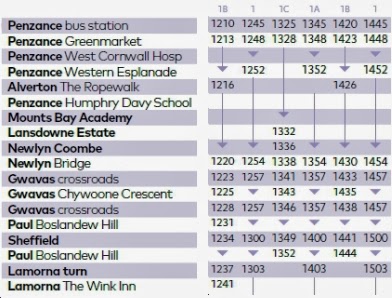 1 and 1A via Western Esplanade
1B via Rope Walk, Alverton
1C via Newlyn Coombe
Sadly, we have a further 1C variation to confuse us. Lansdowne Estate is off the Alverton Road almost at the top of Rope Walk. It's a "shoppers" trip in to Penzance town centre which returns to the estate at 1332. 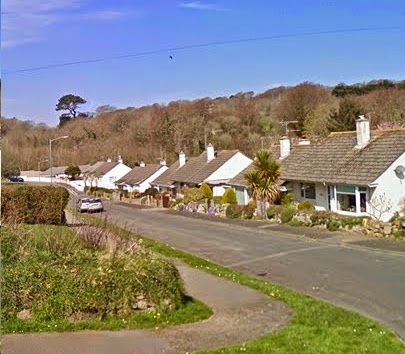 The properties here have a the A30 Penzance by-pass at the bottom of their gardens.

1Bs and 1Cs run via Chywoone Cresent, straightforward if you can remember. It's a housing estate just off the "main" road. 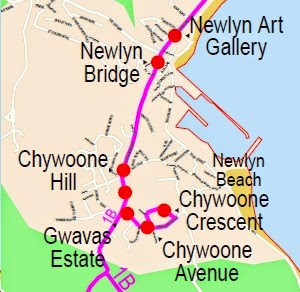 But then Paul presents problems.

Some buses serve Paul before Sheffield; whilst others call after Sheffield. Explanation, please!

Simple when you know how! Most 1Bs and 1Cs terminate at Paul; but there's nowhere suitable to turn round there or at Sheffield. So terminating buses run round a loop. 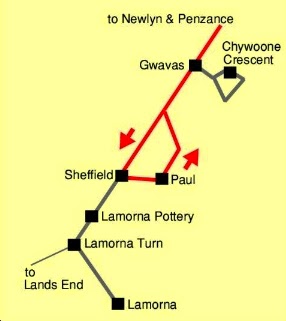 But the few through buses to Lamorna travel in both directions through Paul and Sheffield, hence the order of the timing points. 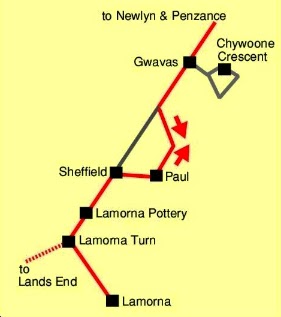 Again, a regular user will get used to these "oddities" and most occasional users won't be travelling to Paul or Sheffield, hardly hotbeds of tourist pilgrimage. Paul das a particularly splendid and distinctive church ... 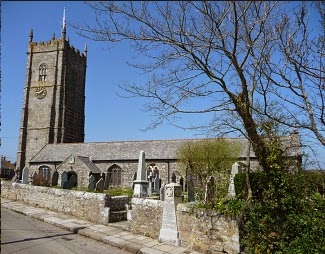 In 1595, as a reprisal for the rout of the Armada, four Spanish galleys made a surprise attack on the area, landing at Mousehole at 8.00 o’clock one foggy morning on 23rd July. They burnt all houses and farms in Mousehole then marched up the hill to the Village of Paul. There, they torched Paul Church after discovering a painted enamelled wooden horse in the Tower.

The Spanish, as devout Catholics, would not be expected to burn a Church. However the whitewashing of wall paintings ordered after the Reformation, the defacing and removal of religious images, plus the presence of what they would have perceived as evidence of Pagan worship, the ornate horse, would have made them feel that they were justified in burning Paul Church. It was rebuilt in 1600.

The 1B and 1C are (fairly) straightfoward, then. From Penzance via either Alverton Ropewalk (1B) or Newlyn Combe (1C), via Chywoone Crescent and round the loop via Sheffield and Paul. A few journeys (very few as our mythical Eric and Mavis discovered) continue to Lamorna.

The problems are exacerbated when we bring (a) schools and (b) the 1 and 1A into the mix. As our second comment writer responded to Anonymous above. 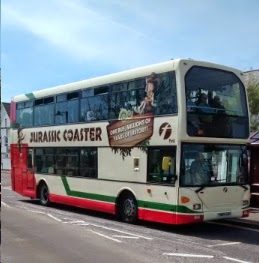 But apparently (and not published) never no more! The general policy is to charge for a single to Beer (£2) and then accept the pass therafter.

Needless to say, the 0927 X53 has been noticeably less full since the embargo. fbb wonders how much revenue has been lost because people now don't travel at all and what effect that will ultimately have on the long-term viability of the service.

Anyway the Mrs toddled along Harbour Road to Underfleet, her local stop, only to see the X53 whizz round the corner 7 minutes early. But the old gal was undaunted and ran (well, walked quickly) round the corner to its Sea Front time point and caught it. 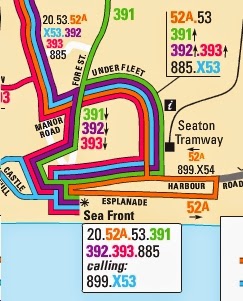 She, innocently (?) proffered her pass to the driver who was chatting on his phone; he waved her on-board without comment and without charge. 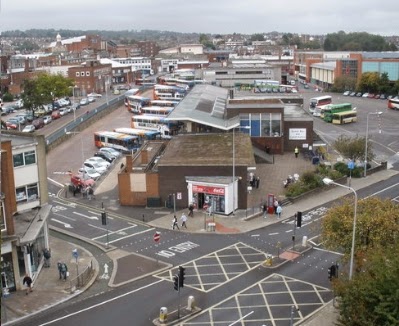 At 1515 an inbound X53 arrived, an unbranded single decker, disgorged its passengers, and retreated to the parking area on the lower level (top right in the above picture). Its arrival was 43 minutes late.

At 1548 the bus returned to the stand, loaded and left 25 minutes late.

There may have been a good reason for this; earlier breakdown, substitute bus and driver, legal drivers' hours break etc. etc. BUT why did the driver not inform and apologise? Poor customer service all round.

Next bus blog : Thursday 19th June
Posted by fatbusbloke at 02:00