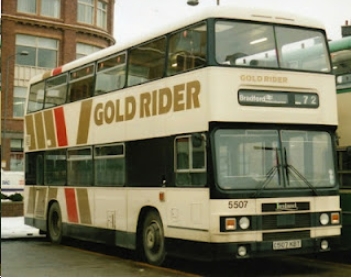 News has finally broken that First West Yorkshire is to redeploy its Wright Streetcars on the long standing route 72. Historically this offered a modest 30 minute frequency, but it has now been developed to run every 8 minutes Monday to Saturday daytime. 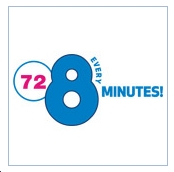 The route follows the main road ...

.... via Thornbury, Stanningley, Bramley Station and Armley. The journey takes 46 min which is 11 minutes longer that the X6 ...

... which whizzes every 20 minutes past many of the the major built up areas by using the Stanningley by-pass. 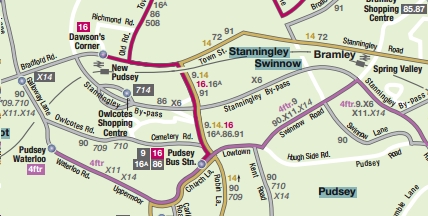 The 72 follows the Stanningley Road (top), the X6 takes the by-pass (centre) and (for completeness) the present ftr route 4 runs to Waterlooo via the Swinnow Road and Pudsey (bottom). Clearly First sees an opportunity to further develop the "stopping" service and is increasing the frequency with Streetcars to every 7 minutes.
The X6, however, is the ideal route for centre to centre passengers. 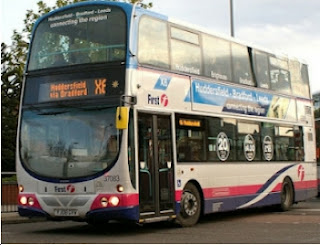 For the record, there is a third route that links Leeds and Bradford by a more circuitous route via Greengates (well to the north of the map extract above). 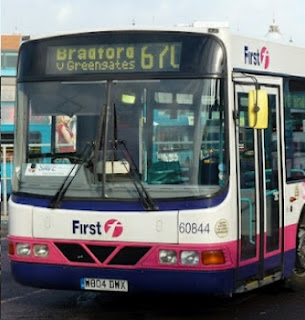 Service 670/671 would not normally be considered a through service as the journey time and roundabout nature of the route would be totally unattractive.

But the key question MUST be asked. The Streetcars were less than popular in York; their success has been somewhat limited in Leeds so will they capture extra business on the Bradford run? Assuming that they have to carry conductors, the costs will rise dramatically. Is it going to work?
The Omnibuses blog has done some calculations:- 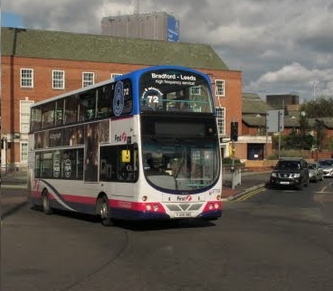 That means there are currently 555 seats per hour with double decks operating at every eight minutes. This will change to 359  (Omnibuses blog quotes 315 - fbb) seats with a bus every seven minutes on ftr, admittedly with considerably more standing room.
So: less seats, higher staffing costs, possibly higher maintenance costs? It all looks a bit risky from a commercial point of view. fbb, in blissful ignorance, reckons at least a 30% increase in running costs which, presumably, means a necessitous 30% increase in revenue to stand still. That is a lot of extra passengers!

Then there is the £74,000 worth of infrastructure improvements. Local authorities have an appalling track record in delivering their share of the "bargain"; maybe West Yorkshire will do better than most. fbb also wonders about Wifi. Is it a gimmick? Have you ever tried to use a laptop on a busy bus? Tomorrow's blog may provide some answers (see above) 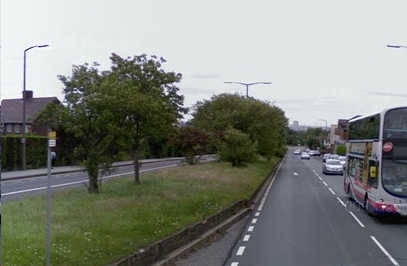 Stanningley Road
Undoubtedly, service 72 is an ideal route to show the Streetcars at their trendy best; far better than wiggling around narrow estate roads in York. But it is still a "stop-and-start" journey with little opportunity to speed the passenger on the way. All credit to First for not simply ditching the vehicles and let us hope that this project is a spectacular success. fbb is looking forward to an autumnal expedition to the lands north of Watford Junction.

Final thought : which version of First's increasingly varied liveries will the bendy fleet carry? We have been promised "full refurbishment".

Thursday's (21st June) "Route One" (read here) on-line magazine** reports "internal refurbishment with leather seats" and a "dedicated livery" in addition to the WiFi. The article implies that the service will be branded "BRT" rather than "72". If that is so, then one thing is certain; BRT (Bus RAPID Transport) will not be the rapid-est way to travel between Leeds and Bradford!

** If you a reading this blog on or after Thursday 28th June, this link will take you to a new edition of "Route One", not the one that mentions the Streetcars and route 72. The is happy Isle of Wight Festival goers queueing at the Fishbourne ferry terminal yesterday (Thursday). But queueing to GET OFF the ferry and out of the terminal area as surrounding roads were locked solid. Three ferry trips were suspended because there was no way the cars could be unloaded. Buses were taking 2.5 hours for the 30 minute journey between Ryde and Newport until they, too were stopped. School buses couldn't get to the schools in time to collect the kiddies.
Why the chaos? IT RAINED! Apparently, the organisers hadn't considered that remote possibility. More fun today, Friday? How we LOVE the Festival .....