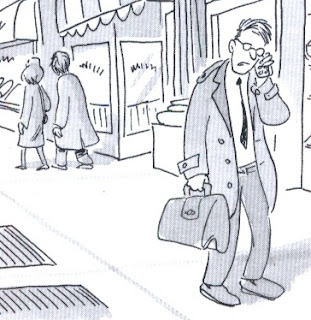 Back in 1995, the great Great Britain Bus Timetable recorded three bus services between Brighton and Eastbourne. The core service 712 ran every 30 minutes ...

... supplemented by an hourly service 711 and 714 which continued its trans-continental trek to Folkestone. 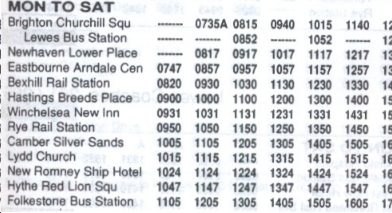 A delightful 4 hours and 50 minute bus ride was a possibility; accompanied by sore backsides and the distinct likelihood of a deep vein thrombosis! There were additional service 713 journeys via Drusillas Zoo aimed mainly at the tourist market.

So the main drag offered three journeys an hour for the 17.6 mile journey. In very general terms the services were then joint between Brighton & Hove [B&H] and Stagecoach from Brighton to Eastbourne. The history of the routes is summarised on some excellent pages on the B&H web site. (read here). 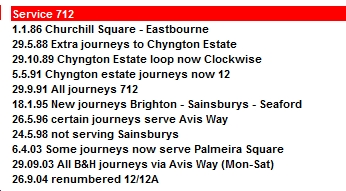 Note that the 7xx prefix was dropped in 2004. Each little route history chunk is accompanied by a goodly block of appropriate photos, as here of a nice red and cream VR. 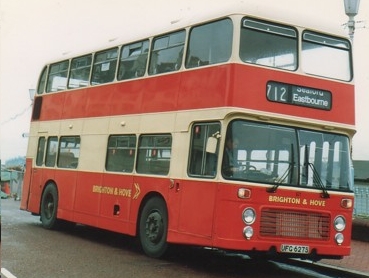 But our purpose here is to look at the excellent B&H timetable booklet, where we find that things have moved on somewhat on the Eastbourne run. It is not that long ago that the rear of the buses was adorned by publicity for the improved 20 minute frequency for the full route, with buses to Seaford being every 10! 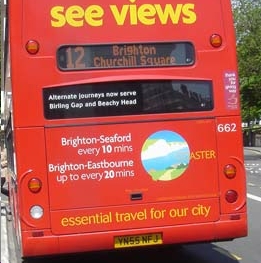 Today things have moved on again. Stagecoach transferred its operations as far as Eastbourne to B&H and the buses now proclaim every 10 minutes all the way! 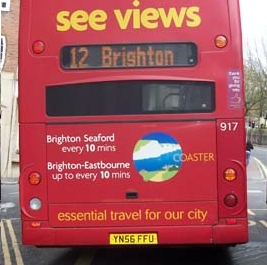 Presumably one of "the lads" was instructed to peel off the "2" and replace it with a spare "1"! 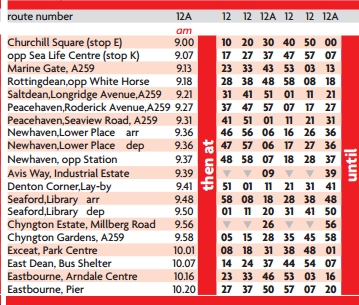 The 12A covers the Avis Way industrial and retail park areas in Newhaven and diverts off the main road into the Chyngton estste at Seaford. These wiggles cost a modest 3 minutes in running time.

With each timetable in the book, there is a simple route map.

In the summer, an additional service 13X operates and for 2012 this has been increased to half-hourly.

It follows the standard 12 route but makes a spectacular deviation to run via Birling Gap ... 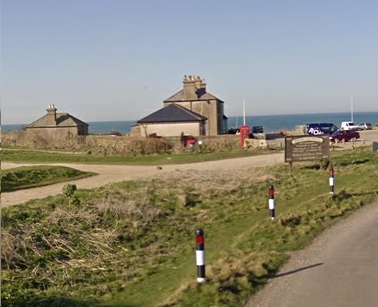 ... and Beachy Head; enjoy splendid views from the top deck. 13X buses run on Saturdays and Sundays from mid April to mid September joined by a Monday to Friday service from the end of July. 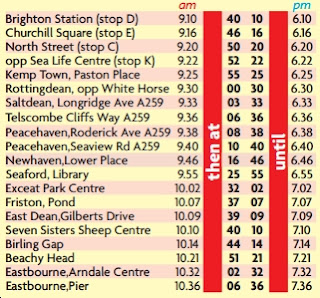 That makes eight buses an hour between Brighton and Eastbourne. Whatever magic pills manager Roger French takes should be in the bathroom cabinet of every bus boss; because they work very well. 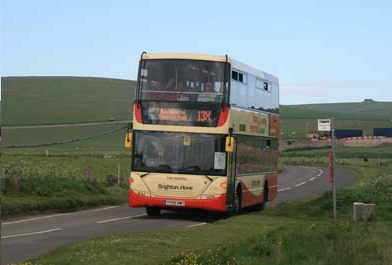 Whew!
In pre-Top Gear days it was customary for reviewers of new motor car marques to enthuse about the motor but make picky remarks about the shape of the gear lever or the size of the ash tray. It would be churlish to criticise this excellent production BUT ... 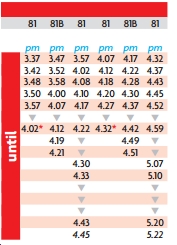 ... it is still in the 12 hour clock! fbb does not necessarily share Barry Doe's evangelical vehemence for 24 hour "normality"; the majority of local folk will be used to coping with the repetitive 12. But fbb often makes mistakes when answering Brighton bus queries. It is all too easy to read 7.35pm as 1735. Now that almost all transport operators (and most domestic electronic stuff) use the 24 hour system, can B&H really justify being one of the very few still "in step"?
If the hours are more than 12
take 12 away
That's the way to do it! 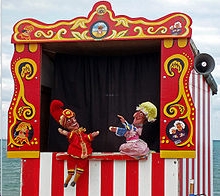 One later change in the B&H book is the inclusion of FWT network maps as a fold out centre section. As stand alone maps, these do present some problems and we will have a look at some examples in a day or two. 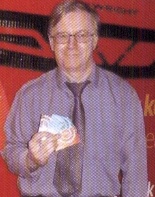 It's beddybyes time for fbb after a hard day's blog and the B&H timetable still has delights to inspire and excite the chubby one. Plenty of bedtime reading yet! All credit to Mike Cheesman, editor of the B&H book and hero of bus publicity.

Mike C seems to have been photographed in front of the front logo of a giant Wright Bros bus. Either that or our hero is only about two feet tall?