Apparently I can walk to work, which is nice, and I should avoid Euston  between 0730 and 1030, I know this is a public sector service here, but,  come on what kinda of advice is this? Backside covering if you ask me.
Please investigate.
Regards,
ThinCommuterSon
How has Boris upset fbb's little boy this time? He has sent him a letter, which looks a bit like this:-

Actually, it's not from Boris himself, but from one of his minions but No 3 (aka ThinCommuterSon) lives at Watford and has been working near Brick Lane in the "East End". So walking is not a practicable option.

It is fair to say that the Olympics have created a wall of fear amongst those who decide on Public Transport Policy. We know that this event has been declared as the "First Public Transport Olympics", but there seems to be a determined effort to frighten Londoners into emigrating to Wigan "for the duration".

The web site quoted above is just, well, terrifying ... 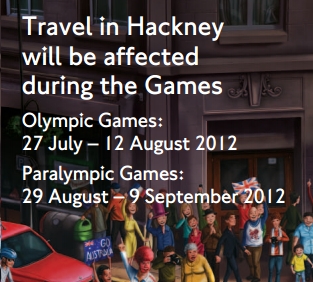 There is a leaflet for each of the London Boroughs explaining various road restrictions and parking changes. 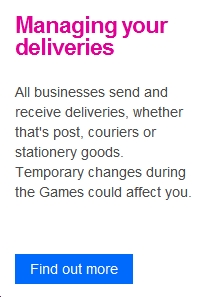 You are told how to manage your deliveries; i.e. don't make any and don't expect any! And you can read "case studies" form well known businesses as to how they are planning to cope. 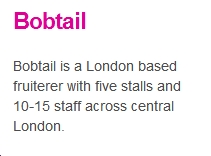 But it's the public transport "advice" that is the most scary. There is a map showing where the men in grey suits think the biggest delays will be ... 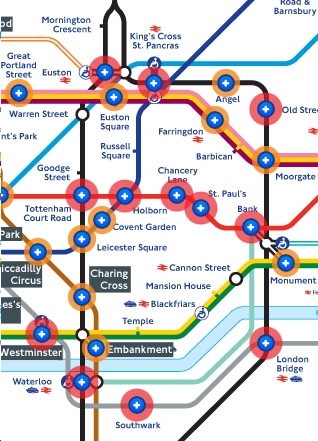 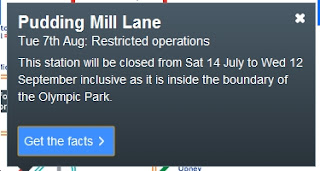 ... and "restricted" stations.
Although your ticket includes local public transport, you may wish to try getting there by car. Well ... 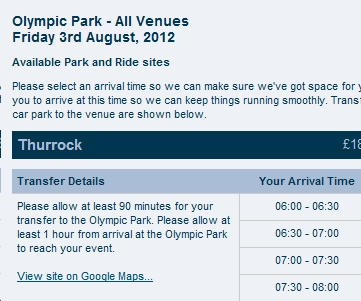 ... you can park at Thurrock allowing 90 minutes for the coach to the Olympic Park and another hour to get to your actual event; or at Hertford allowing 1 hour 50 minutes plus the on-site hour as before. It will cost you £18 to park but that does include the coach or bus transfer. If you arrive late your car will be crushed and you will be thrown into a pit of ravenous alligators. [OK, fbb invented that bit!]
Or you could book a coach ....

... if you don't mind possibly starting at the crack of dawn ... 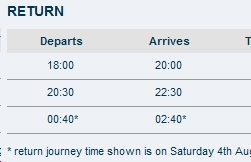 ... if you want to make a day of it.
Apparently coach ticket sales are not going too well!
You have to be impressed with the arrangement being made to cope with the crowds, but fbb can't help wondering if its all a bit over the top. One commentator wrote recently in the press that he expected it to be either a complete and utter disaster or one huge non-event as far as public transport is concerned.
Of course, you could just batten down the hatches, fill the freezer to the brim and stay at home. That would be nice; apart from the real possibility that every available TV channel will be broadcasting olympic stuff to eternity.
Are there any hotels on Rockall Island? It was all much simpler in 1948 ... 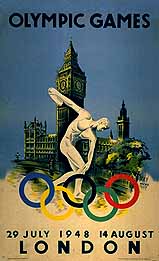 No new venues were built for the Games. A cinder track was laid inside Wembley Stadium and all other venues were adapted. For the first time at the Olympics swimming events were held undercover, at the 8000 capacity Empire Pool. As the pool was longer than the standard Olympic length of 50 metres a platform was constructed across the pool which both shortened it and housed officials. In 2010 the last remaining venue from the Games, the Herne Hill Velodrome where cycling events were staged, was saved when a new 15-year lease was agreed meaning that repairs could take place. 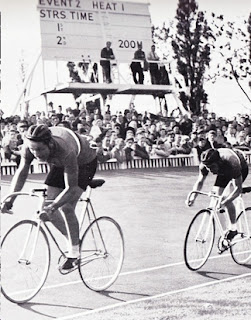 Campaigners and users of the track had feared that it would be forced to close as it was in desperate need of refurbishment.
The whole event came to be known as the Austerity Games due to the economic climate and post-war rationing. Athletes were housed in existing accommodation (an RAF camp and college halls) instead of an Olympic Village.
The opening ceremony, and over 60 hours of other coverage during the Games, was broadcast live on BBC television. The BBC had paid a sum of £1000 for the broadcasting rights. A TV and radio licence was £2, equivalent to £60 today. 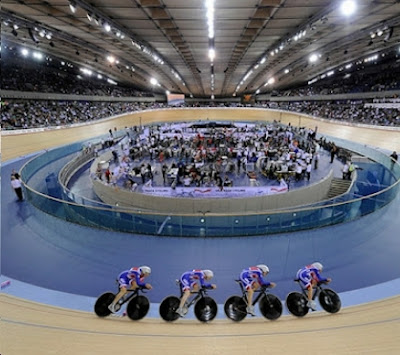 Velodrome 2012
Question: Have we lost the "Olympic Ideal"?

Next Blog : Saturday 2nd June
Posted by fatbusbloke at 04:44