A good read : on the train. 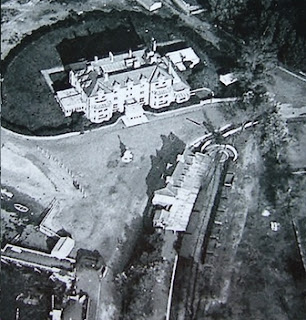 ... purchased from a box of second-hand volumes on sale near the site of the former Bembridge Embankment toll road. Much of the picture above has gone (Bembridge Station, Royal Spithead Hotel), but where road tolls were once collected (bottom, left of centre) stands a modest little cafe, visited by fbb and family during the Easter hols.

The road was owned by the Railway, by the way, and for many years after the branch to Bembridge closed, it was railwaymen that relieved motorists of their cash for the privilege of passing that way.


The book's story begins with a body thrown off the Sankey Viaduct. The dead body lands in the canal and is fished out of the water by the crew of a passing sail barge. The year is 1852. There are witnesses to the horror, namely two women and a child. A more "useful" witness is an artist who is painting the scene and enthusiastically adds the projected corpse to his canvas. 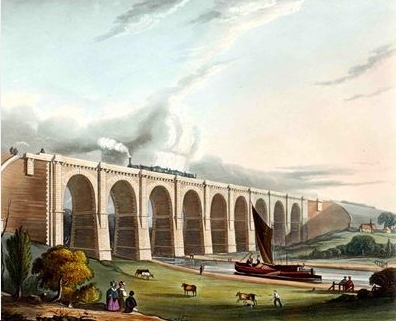 The painting is real, but the murder is fictional, hence no plunging personage. The artist, Thomas Talbot Bury, is renamed Ambrose Hooper for the fictional account. Sankey viaduct, on the Manchester and Liverpool Railway and just west of the centre of Warrington, is also real and remains in use today. 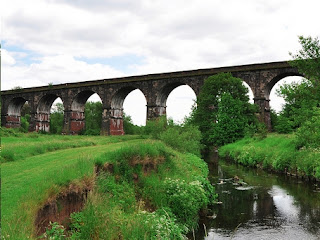 The canal is no longer the bearer of bountiful barges, being somewhat overgrown and, in places, filled in. The watercourse illustrated above is the Sankey Brook.

The murdered man in the story is a fictional French engineer, Gaston Chabal, who is working for a historical figure, Thomas Brassey ... 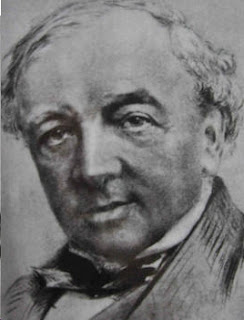 ... an English entrepreneur who is building a railway line in France. Chabal is on the way to visit a "lady friend" in Liverpool when he is stabbed and dramatically ejected from the train. The narrative also refers, in passing, to Brassey's celebrated Barentin Viaduct, which crosses the valley of the Austreberthe River in Normandy. 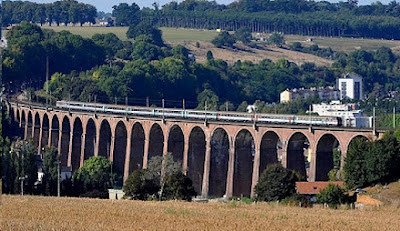 The original construction simply fell down immediately after construction and, being a good egg and British to the core, Thomas rebuilt it at his own expense. This noble act of repentance** is referred to in the narrative as well. This view is from Rue Locke in the town of Barentin itself and gives a better idea of the sturdy magnificence of Brassey's second attempt, still in use 165 years later. 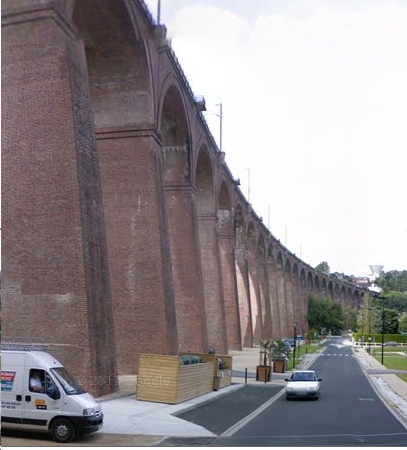 The first viaduct collapsed on 9th January 1846 but was rebuilt in just 6 months.

So the "hero" of the novel travels to France and immediately becomes involved in repeated occurrences of sabotage at Brassey's construction site on a subsequent extension of the railway network.

The author, Edward Marston, neatly intertwines fact and fiction as the page-turning plot progresses. He has chosen names for his fictional characters from a variety of sources. Gaston Chabal, the corpse in question, is, in reality, the name of a not-very-famous French architect. Brassey's right hand man is called Aubrey Filton ... 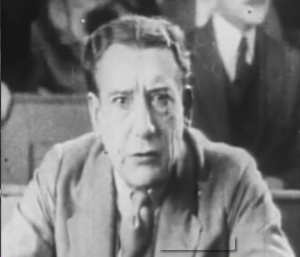 Our hero, Inspector Robert Colbeck of Scotland Yard, is known as "The Railway Detective" because of his enthusiasm for trains and his success at apprehending ferroequinologically focussed felons. 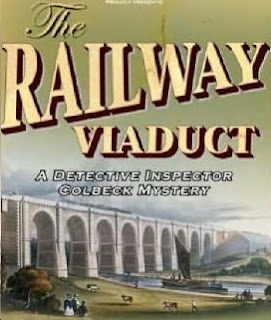 fbb will, of course, not reveal the outcome of the worthy inspector's intrepid investigations. It would be hardly possible as the chubby one had only reached page 196 of 314 when penning this blog!

This is hardly great literature but the stories stand alongside Lord Peter Wimsey and Campion as thoroughly relaxing reads but with an accurate railway theme. There are seven books in the series ... 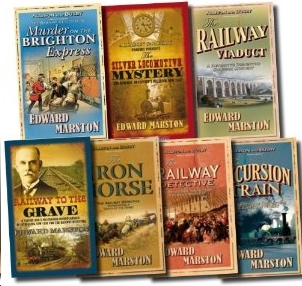 ... many of them available from Amazon at "silly" prices.

The volume is recommended by fbb as a refreshing change from Rail, Modern Railways, Buses, Passenger Transport, Transit or Anoraks and Accuracy Annual (a recently published De Agostini partwork, £49.99 each month); all essential reading for the chubby one.

** Blame was never officially attributed to Brassey for the collapse, nor was a reason ever published. Viaduct piers have a brick shell and a core of rubble and it is possible that rubble was tipped in before the mortar had set, or, more likely, that the mortar mixture was not strong enough, mixed by inexperienced labour. Brassey used stronger mortar mix the second time around.
.
P.S. 9 arches were destroyed in wartime bombing in 1944 : it took until 1946 to complete repairs.
.
Next Blog : due Tuesday April 17th
Posted by fatbusbloke at 02:57