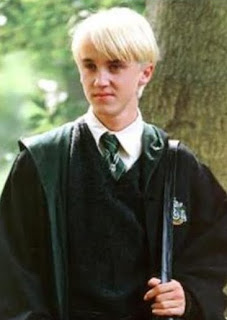 Draco Malfoy, a Harry Potter character played by Tom Felton, is not a nice chap! In an old Dr Who episode, the then Doctor (Jon Pertwee) claimed to have met the Greek Draco and that he was "actually quite a nice chap". 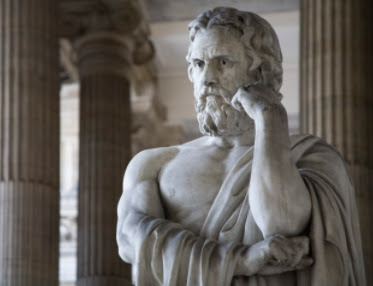 He was appointed by the leaders of Athens to introducer a proper written legislative system but some factions were horrified at the severity of some of his punishments. Since the 18th century "Draconian" has implied unexpectedly severe action by those in charge.
Such an adjective is rapidly being the chosen descriptor for the activities of the bus and rail industry. Former Transport minister Norman Baker writes, in the latest issue of Passenger Transport, a piece headed "Bumpy road ahead for buses" to which we could easily add "and for trains"! 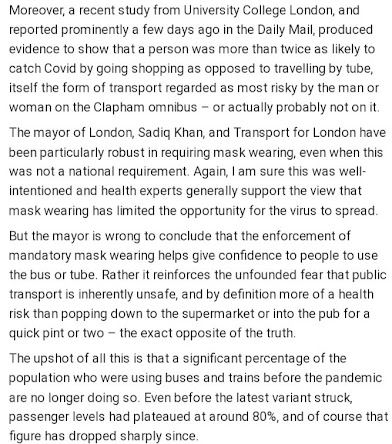 Common sense shows the wearing a simple cloth mask offers negligible protection (in or out). One of the most dangerous environments where the virus flourishes is in the home and in the workplace.
Part of the industry's problems has been the totally unjustified demonising of public transport.
Baker also has much to say about the Build Buses Back Better plans currently being "evaluated" at DaFT. fbb will provide a few juicy (and depressing!) quotes in tomorrow's variety blog.
Mean while, here is First Bus in Sheffierld:- 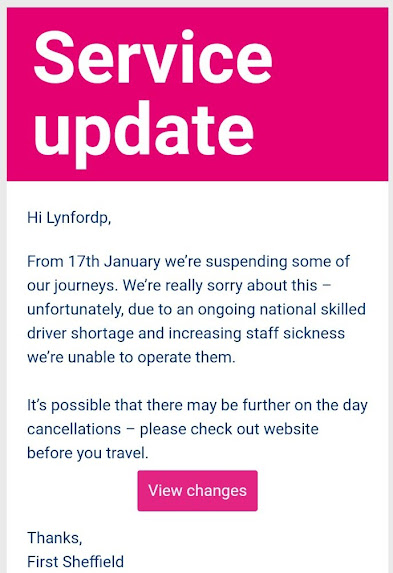 What First will be doing from Monday is chopping bocks of work (duties) out of almost every service that the company operates. Because these are what drivers do (actually from Monday, what drivers DON'T do) the trips are not at fixed intervals - they are just "gaps" in the service. Here for example, is the Monday to Friday chopping on service 75, running currently at an already reduced 15 minute frequency. 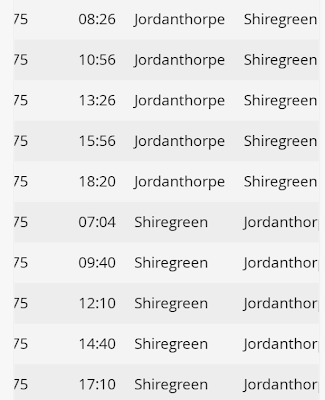 First management might argue that there are alternative journeys (service 76 and 76a) over much of the route - but there are similar cuts there. And, anyway, this is poor comfort for the residents of Meadowhead or Bradway on the 75 who face long half-hour gaps in service and gaps that are either unpredictable or require constant poking of a mobile phone.
Here is the 56, also a 15 minute frequency, where there is no viable alternative over most of the route - and these are in one direction only. 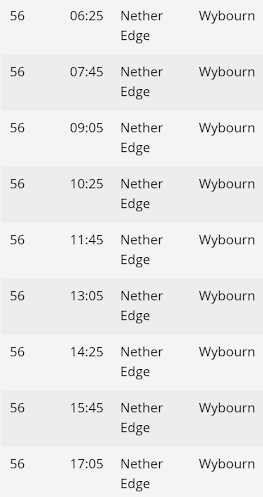 The opposite direction is similar.
And the on line blurb implies that there may be further daily ad hoc cuts; or more chunks like the above, to be published weekly.
Surely it would be better to reduce the standard frequency by one notch, say, in the above cases, to every 20 minutes. At least the passengers could follow what is happening?
Progress Revealed for Park and Ride 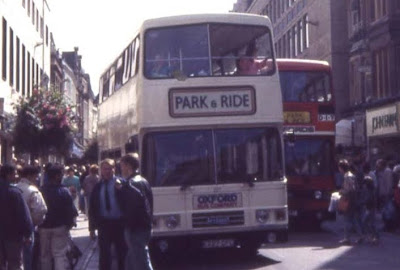 Oxford and York were two of the first cities to commit fully to the concept of Park and Ride, with multiple sites circling the congested and historic road network in the centre. Oxford has progressively refreshed and renewed the product. Here is one of  the early liveries ... 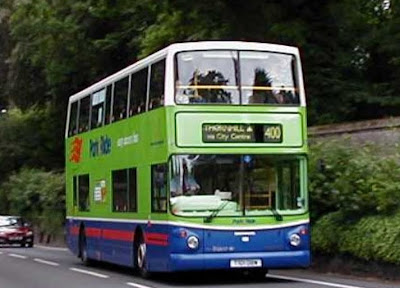 ... distinctively different and thus a clear "stand-out" from the normal red-liveried City routes. The green theme continued with single decks for a while, now under Go Ahead ownership. 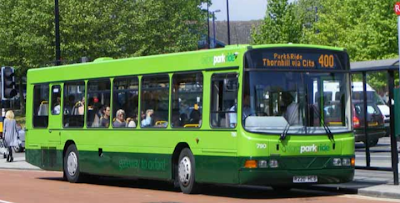 Latterly, a more subdued green has been the dress of the day on the 400 to Thornhill ... 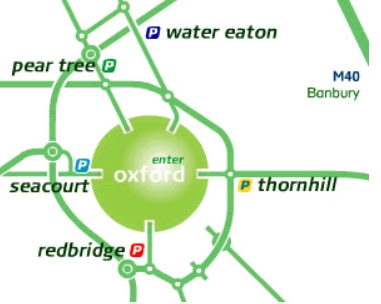 ... but the vehicles are smarter than ever! 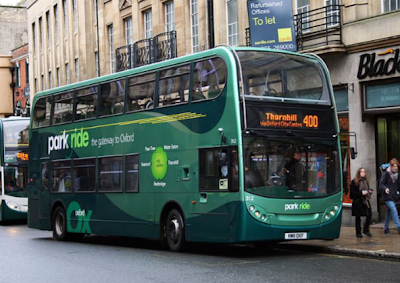 But green becomes blue in a change reminiscent of the philosopher Wittgenstein (look up his "grue/bleen" pronouncements!). It looks like the current Stenning craze of various diagonals in complementary colours is today's must-have livery style? 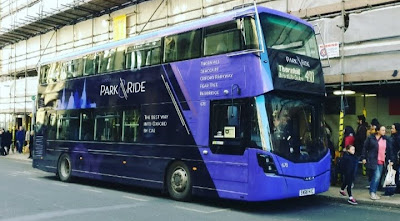 Presumably somebody thinks a change of colour will heighten the recognition?
Puzzle Pictures
fbb is getting really good at forgetting to post the answers. 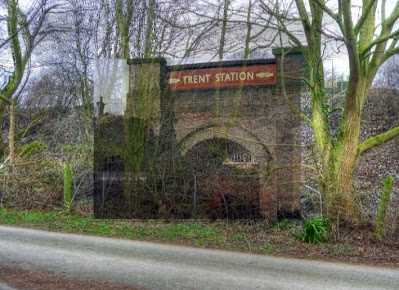 This was the entrance to Trent station located where lines from Nottingham and Derby joined the Erewash Valley line direct from Chesterfield. fbb blocked out the station name.
Maybe worth a historic blog some time soon?
And this one should have been easy. 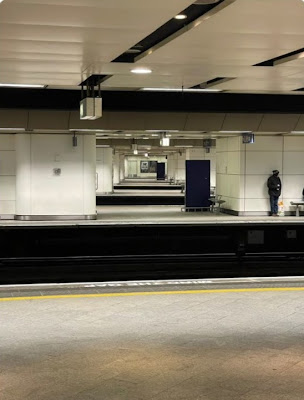 It is a rare view of a train-less Birmingham New Street looking (more or less) all the way across the station. The caption says "from Platform 1 to Platform 11" - maybe for some reason you cannot see No 12. 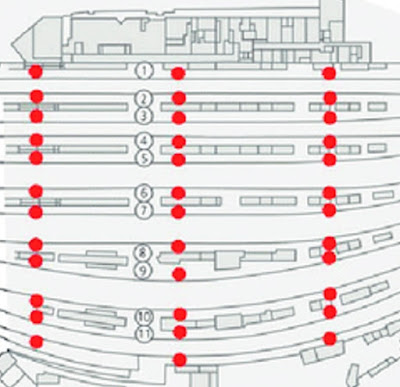 A Couple Of Feline Funnies ...
... especially for Mr Tubbles who is even more dissatisfied than usual, because his full-time servant (Mrs fbb) is not currently able to perform her duties! fbb is, apparently, a poor substitute.
Both pictures come from the USA (of course!).
The first is pinned to a garden fence. 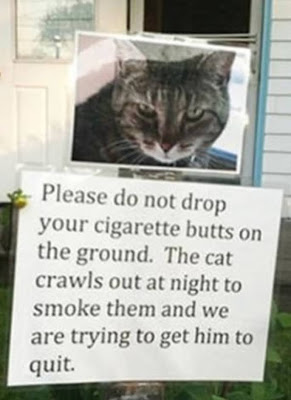 The second is from a town (also in USA, name obscured by snow) that posts regular funnies on its approach roads, 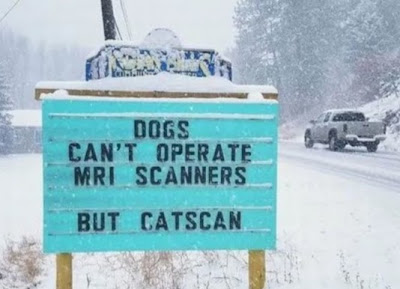 Mr Tubbles is not impressed! 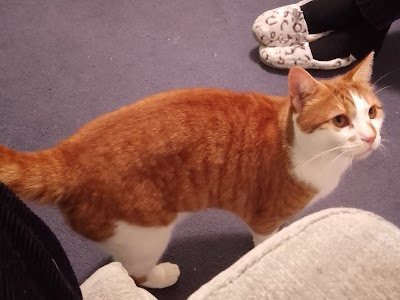 Next Variety blog : Sunday 16th January
Posted by fatbusbloke at 02:00