There's A Lot Of It About 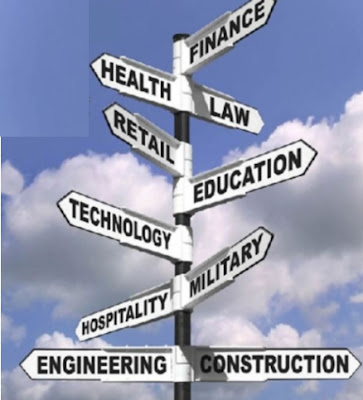 Apart from a school's sixth form, there are all sorts of college opportunities straight after school at age 16 plus. fbb went from grammar school to University and straight into teaching because you did not need a teaching qualification if you had a degree. But, unlike University, a whole raft of courses are attended by kiddies who live at home. So they need to catch their bus. 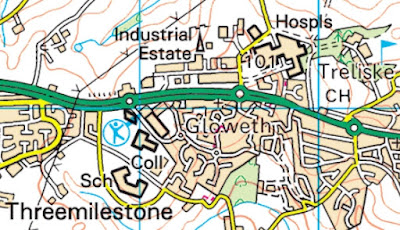 Truro College is the biggie. It sits on the north western edge of the City near the "village" of Threemilestone and opposite an industrial estate and the massive Royal Cornwall Hospital (a k a Treliske Hospital). 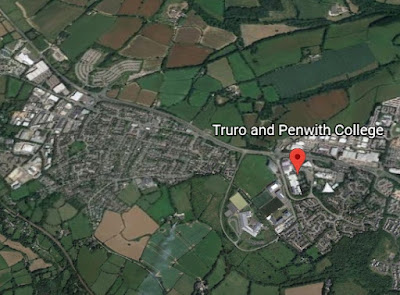 First Bus run loadsa buses from all over the county to this site. At 1625 ... 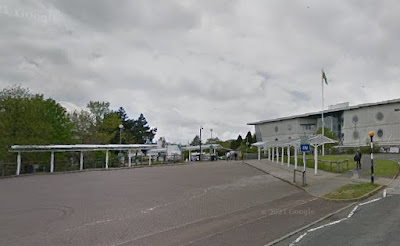 ... there is something of a Le Mans start as approx 30 buses collect their loads of weary students and convey them homewards. It is a massive operation. These services have moved from the main timetable book to a separate publication ... 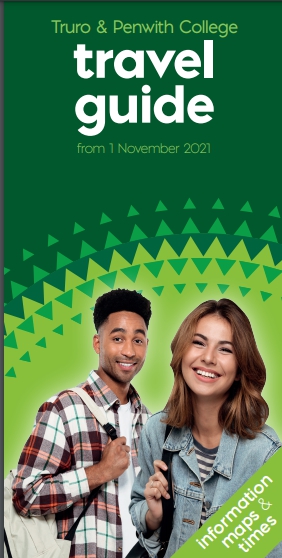 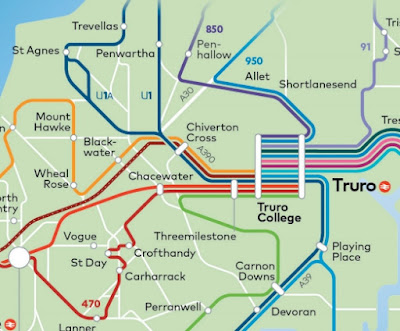 ... and includes a selection of First's "ordinary" services that also call at the campus. 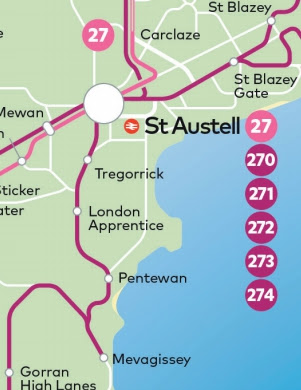 Here is a full list of all the college-dedicated and ordinary routes. 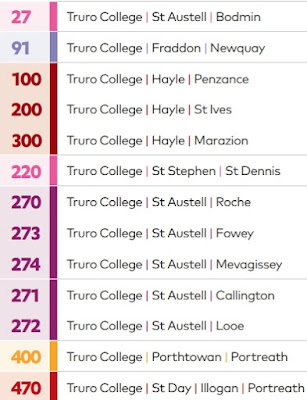 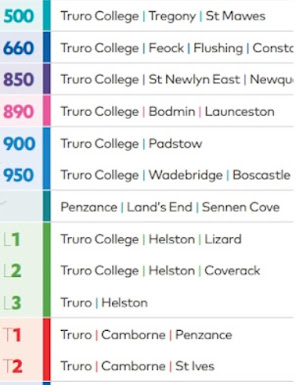 Just 11 of this list are part of "everyday" services.
The pattern of these college routes is similar; they are grouped according to destination ... 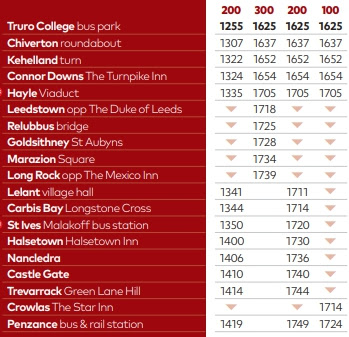 ... e.g. Truro to Hayle and on to the Penzance area, serving communities not covered by the T1 Tinner. Another set in similar vein is part of the extensive St Austell group (see map above). 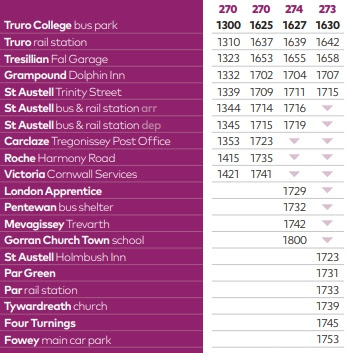 Some groups of services have a midday return trip, as above. These were introduced from September, partly to provide links to communities that would not otherwise have a bus along that corridor. 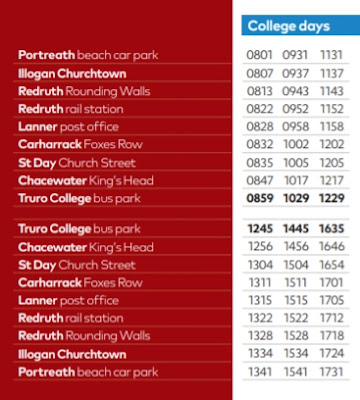 ... it provides different links from either the 46 (PALE BROWN) or the 47 (DULL GREEN) - but only on college days.
Penwith College is "branch" office" of the Truro College, situated on the north western edge of Penzance ... 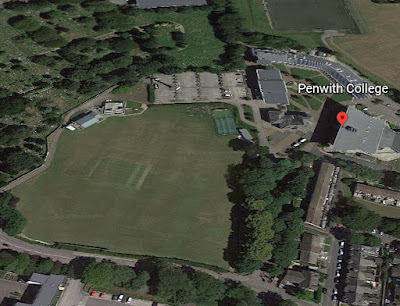 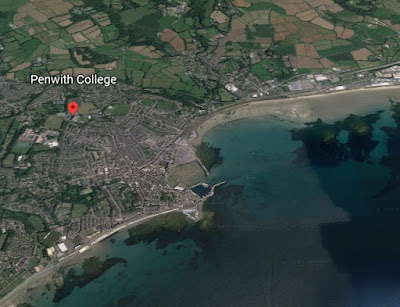 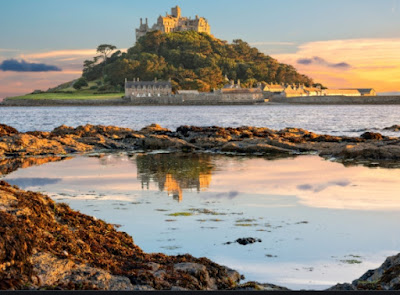 There are fewer dedicated services to Penwith College ... 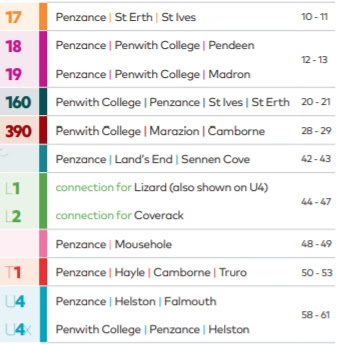 Mostly these are through journeys, but not advertised as such in the "normal" timetable. And there is the 390 and the L1. 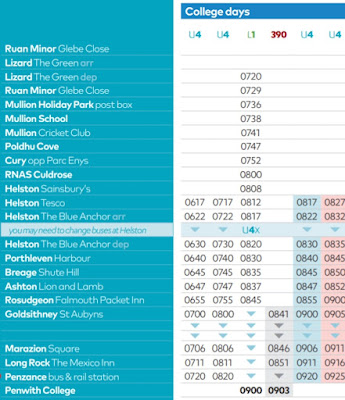 Despite the limited number of dedicated services to Penwith College, there is plenty of opportunity to get to this developing "branch office" of Truro College.
The Falmouth University and Exeter University joint campus at Penryn is served by U1, U1A, U2, U3 and U4 which (apart from the 15 minute "shuttle" between Penryn and the former Art College in Falmouth itself) are rebranded "normal"  bus routes. 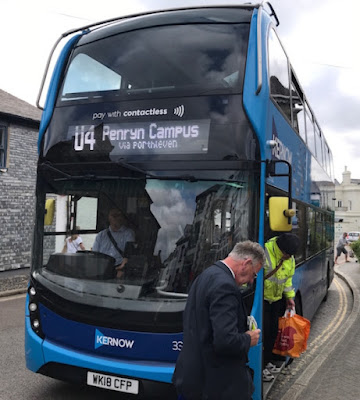 The U4 was simply a renumbered "normal" service 2. 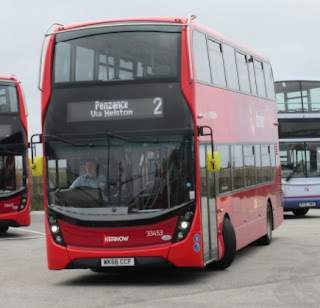 The route number at Helston goes back to very early First Western National Days. Penryn Campus is big and well served with seven buses an hour on the four routes when Academe is in full swing. 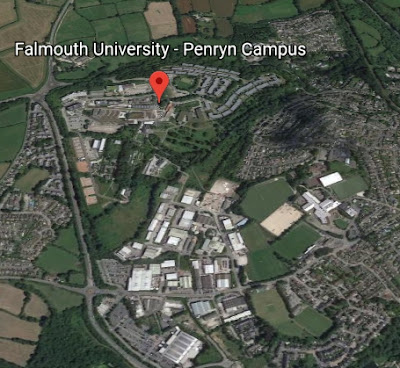 So these University routes do not feature in the colleges book; they are part of the main timetable service.
There is one other college in Cornwall. 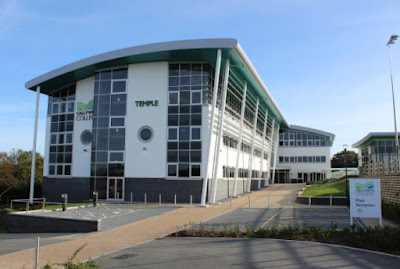 Callywith College (also part of the Truro College group) is at Bodmin ... 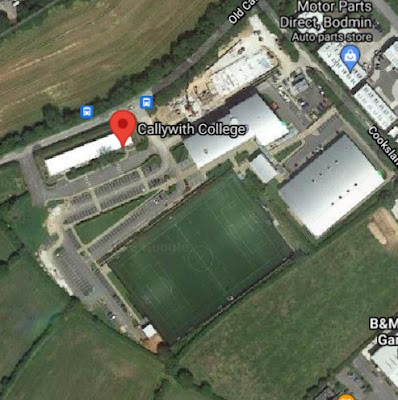 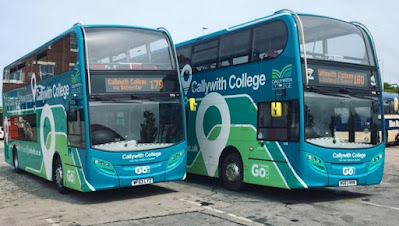 And there are loads of them to marvel at. 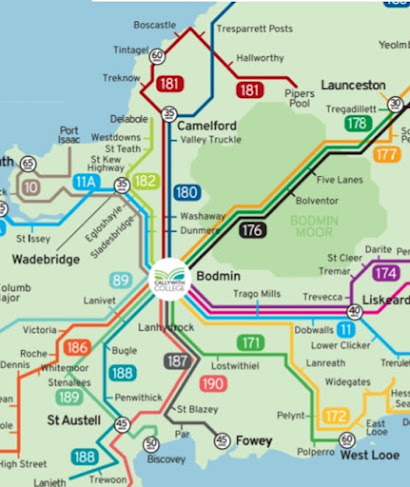 Which brings us naturally to the Go Cornwall comprehensive timetable books that are not quite comprehensive, as we shall see.
More from the Hornby catalogue will follow at the weekend.
Next Catch-up Cornwall blog : Friday 21st January
Posted by fatbusbloke at 02:00