Kings Ferry commuter coaches would pick up at Puddle Dock, then at a stop on Cannon Street. 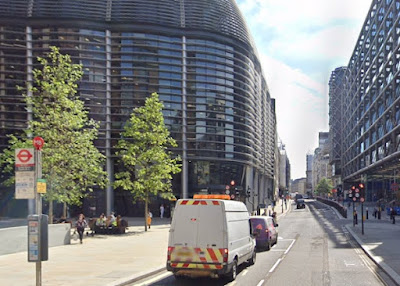 Note that Transport for London did not give Kings Ferry the privilege of route numbers! But it is not "stop 47" ... 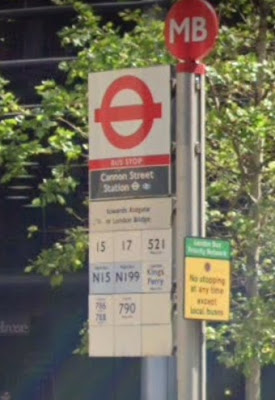 ... a mystery only known to the Kings Ferry timetable compikers, it is stop TB.
Next stop is "Tower of London", a k a Tower Hill and opposite the Tower ... 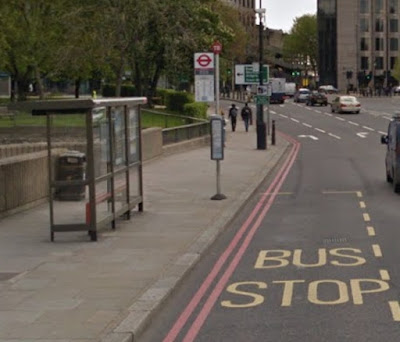 ... followed by a more lengthy trek to Canary Wharf, when the coaches stopped in the shadow of Number one Canada Square ... 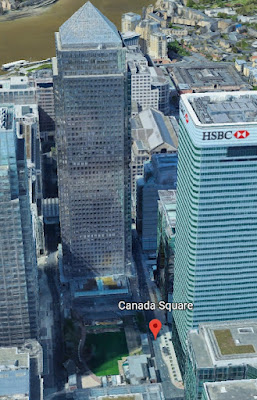 ... and on a road (North Colonnade) not penetrated by Streetview.
Thus the coaches would depart from Puddle Dock and run via Queen Victoria Street, a "new" road commissioned in 1861 and bashing its way through decaying housing and warehouse property,
The original route east from Blackfriars was Thames Street, Upper then Lower ... 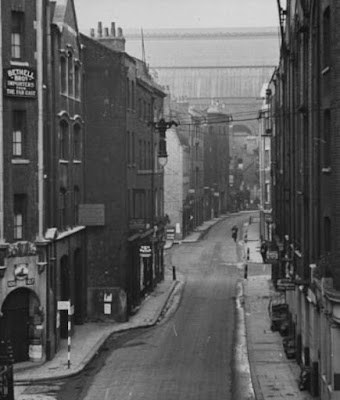 ... a road which gave access to wharves and yards which led down to the river.. 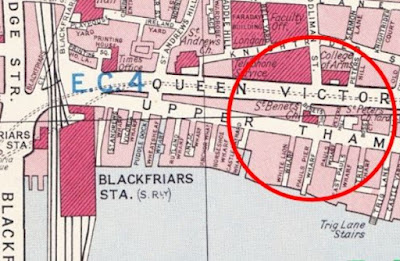 A somewhat foreshortened picture may give some idea of what this area looked like in times past. 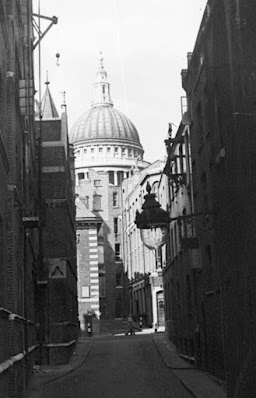 The photographer is standing in St Pauls Wharf with the river at his rear; the building with light cornerstones is St Bennet's (Welsh) church on Upper Thames Street and, round the corner of Bennets Hill Street (past the church) you would cross the new Queen Victoria Street and follow Godliman Street up to St Pauls Cathedral. Here is the route on the 1746 map. 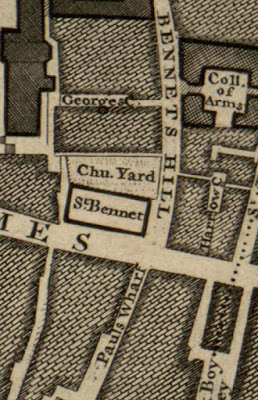 But if we stand on the river bank today, Pauls Wharf has become the City of London School ... 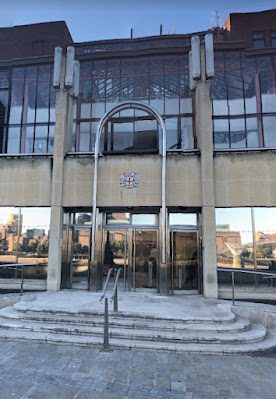 ... and, if we were crackpot enough (or illegal enough) to stand in the equivalent position on today's Upper Thames Street to gaze upon St Bennets Church ... 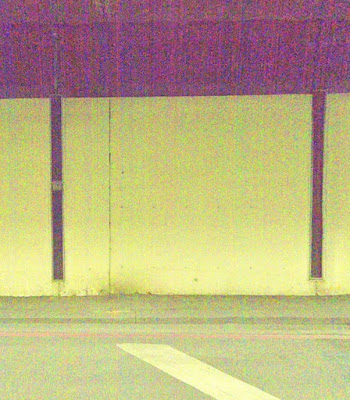 ... we would not live long. A much rebuilt and re-aligned Upper Thames Street is in tunnel under a totally redeveloped area. 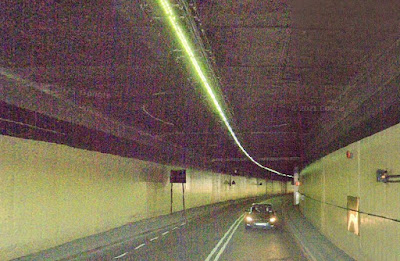 This whizzo bit of road is now a continuation of The Embankment, eastwards under the Blackfriars road and rail bridges ... 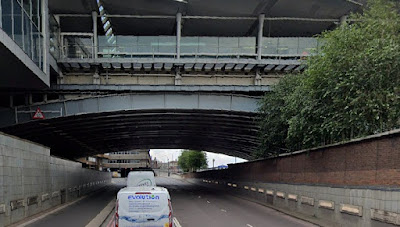 ... then under various office blocks ... 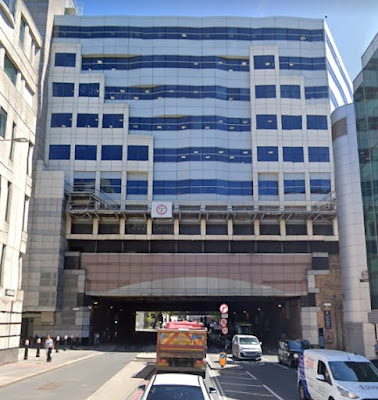 ... and a much redeveloped Cannon Street Station before (eventually) joining the older route at Tower Hill.
A Google Earth view shows today's version of the former route from river to cathedral. St Bennets is centre bottom of the shot. 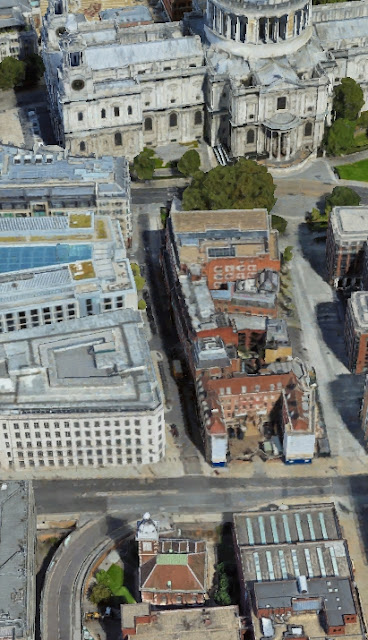 Instead of being on the north side of Upper Thames Street, this historic church is now on the south side of Queen Victoria Street ... 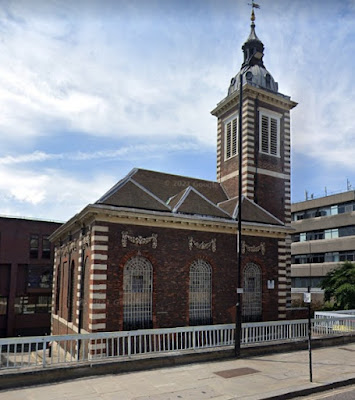 ... and down in a little pit! Of course the much nicer new route from river to Wren is provided by the Millennium Bridge and its re-jigged walkway. 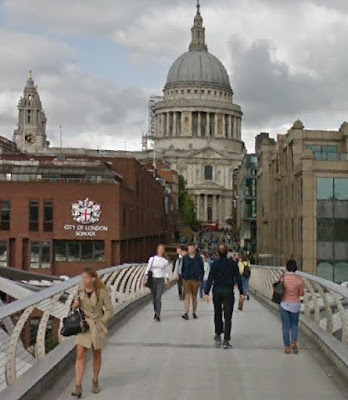 It is just one "block" further east than the old alley/road via St Bennets! If you are struggling with all this, here is the modern Streetmap map of the area. 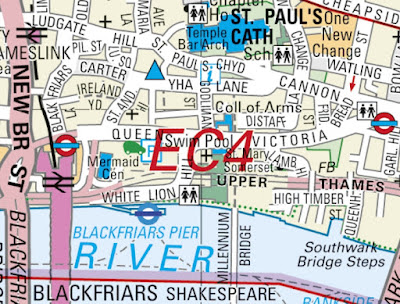 Hmmm. Probably even more confusing!
We know that Puddle Dock is filled in, but two pictures exist of its decaying days. Here two old barges are parked ... 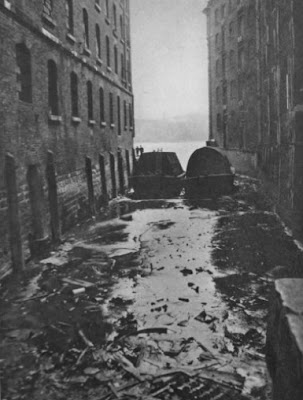 ... and a similar view at low tide but filled with detritus. 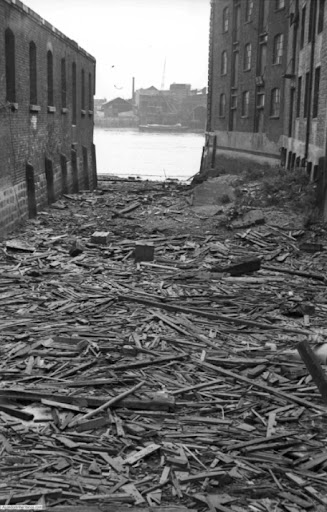 You can just make out one arch of Blackfriars railway bridger in the gloom over by the far bank. It bears no relationship with todays view! 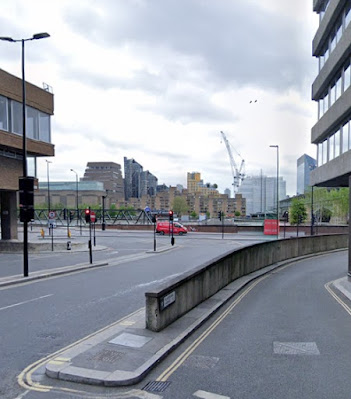 But you can still spot the far-off arches of the railway bridge - that's about all that is common to the two pictures. Oh yes, there is a river still there!!
And The Mermaid? 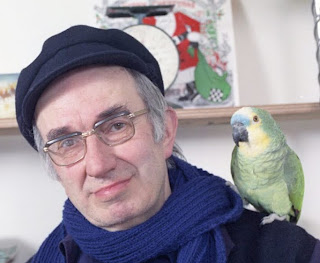 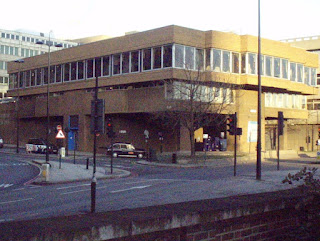 The Mermaid Theatre was a theatre encompassing the site of Puddle Dock and Curriers' Alley at Blackfriars in the City of London, and the first built in the City since the time of Shakespeare. It was, importantly, also one of the first new theatres to abandon the traditional stage layout; instead a single tier of seats facing the stage in three blocks. 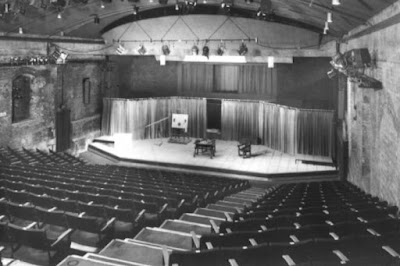 No proscenium arch! As can be seen on the left (above) the auditorium used bits of the former warehouse.
The 20th-century theatre was the life's work of actor Bernard Miles with his wife, Josephine Wilson. His original Mermaid Theatre was a large barn at his house in the St. John's Wood area of London.
Miles was encouraged to build a permanent theatre and, raising money from public subscriptions, and his revenues from publicity spots for the Egg Marketing Board; he oversaw the creation of the new building on land formerly occupied by a warehouse.
No longer a Theatre, the building has survived the threat of demolition and is now a Conference Centre with the usual accompaniment of restaurants and bars. 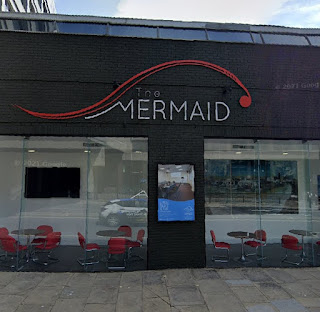 The entrance is next to the former bus stop for the Kings Ferry commuter coaches to Kent, now withdrawn. 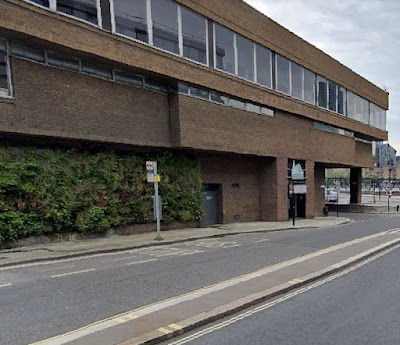