So No Surprise There, Then? 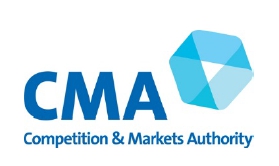 They do have a little video explaining how lovely they are ...
... and these very nice people have decided that they need to "investigate" the "merger" between National Express and Stagecoach which is actually a complete takeover of Stagecoach by National Express however it is dressed up.
No our readers will know that Stagecoach have already announced the sale of their share of Scottish Citylink ... 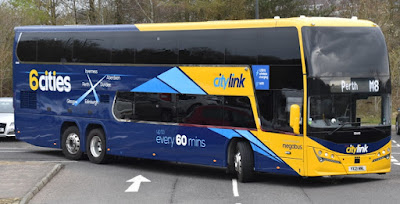 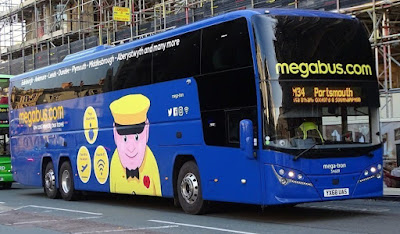 ... and the whole of South West Falcon (Plymouth to Bristol). 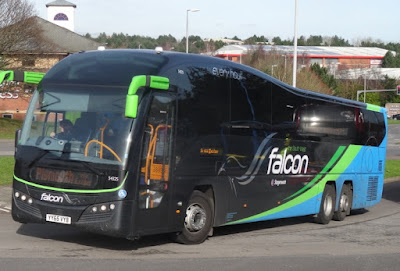 And, of course, NatEx has already sold its ex Dundee Corporation company rebranded as Xplore Dundee to McGills. 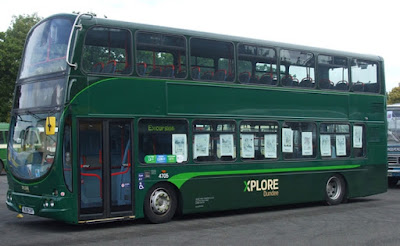 The CMA might be concerned with bits of the West Midlands, especially Nuneator, where Stagecoach and NatEx (Coventry) impinge a little ... 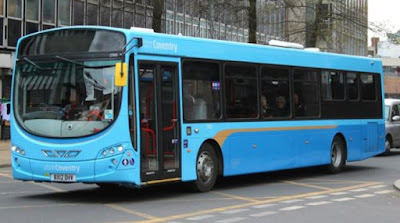 ... but not much at all
So this is how it works. Somebody at the CMA thinks that there is the possibility (however remote) that this "merger" may act against the public interest by removing competition. In this case most removal has already been done, or at least is in progress.

So the CMA writes a formal "thing" to National Express and Stagecoach saying, in very simple terms, YOU CAN DO NOTHING until we have investigated and pronounced judgment.

Being a legal document, this CMA letter says the same thing several timers and loads it with definitions and explanations that are legalistic but presumably necessary to prevent nasty companies trying to avoid doing what the CMA want.

fbb is sure his readers would like to read an extract?

Of course they would. Maybe?

Now for the purposes of preventing pre-emptive action in accordance with section 72(2) of the Act the CMA makes the following order addressed to National Express and Stagecoach (the Order).

(a) lead to the integration of the Stagecoach business with the National Express business;

(b) transfer the ownership or control of the National Express business or the Stagecoach business or any of their subsidiaries in the United Kingdom; or

(c) otherwise impair the ability of the Stagecoach business or the National Express business to compete independently in any of the markets affected by the transaction.

i.e. you two ain't allowed to do anything

6. Further and without prejudice to the generality of paragraph 5 and subject to paragraph 3 and 4, National Express shall at all times during the specified period procure that, except with the prior written consent of the CMA:

(b) except in the ordinary course of business:

(i) all of the assets of the National Express business are maintained and preserved, including facilities and goodwill;

(ii) none of the assets of the National Express business are disposed of; and

(iii) no interest in the assets of the National Express business is created or disposed of.

i.e. you at National Express ain't allowed to do anything

7. Further and without prejudice to the generality of paragraph 5 and subject to paragraph 3 and 4, Stagecoach shall at all times during the specified period procure that, except with the prior written consent of the CMA:

(b) except in the ordinary course of business:

(i) all of the assets of the Stagecoach business are maintained and preserved, including facilities and goodwill;

(ii) none of the assets of the Stagecoach business are disposed of; and

(iii) no interest in the assets of the Stagecoach business is created or disposed of.

i.e. you at Stagecoach ain't allowed to do anything

Some in the industry may feel this is a bit over the top for a merger where the two parties have very little in common geographically ... 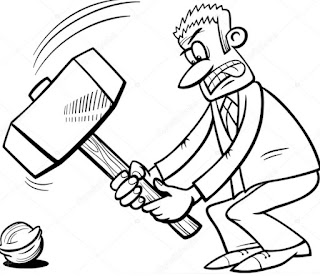 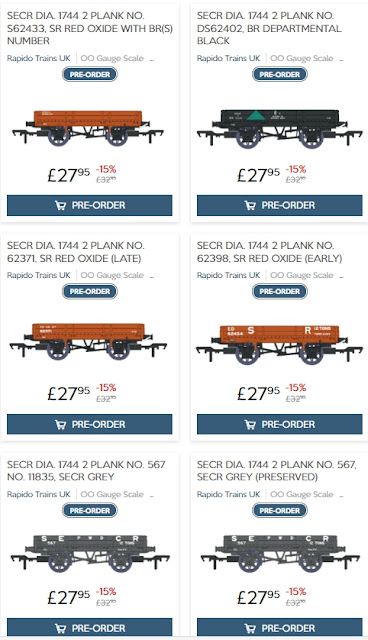 (only six of the eleven shown here)
Or - or and! - you could but eleven versions of the SECR goods van.

Rails of Sheffield are offering them, each one, at a £5 discount which means all 22 will ONLY cost you just 10p less than £615. And there are five- and seven- plank wagons to come. 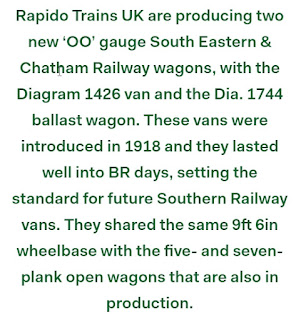 Nearly Nasty
Because of Mrs fbb's very serious arthritis of the hip, the fbbs, corporately, have decided to instal a stair lift. Even after Mrs fbb is fitted with plastic joints (similar to Lego), fbb suspects that she will not be jogging up the steep hill to Seaton Golf Club very often in the future. 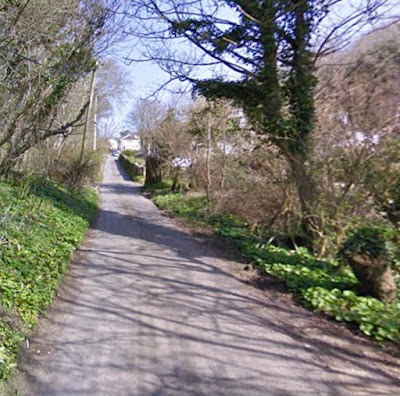 It is called "future proofing"!
The stair lift (Stannah) is powered by a very simple 13 amp plug and the whole whirring magnificence only draws 3 amps.
So Graham Tumber (local Seaton "sparks") arrived to add a new socket in a particular place appropriate for later installation.
"Look at that," said Graham, "your shower circuit is nearly burnt out!". 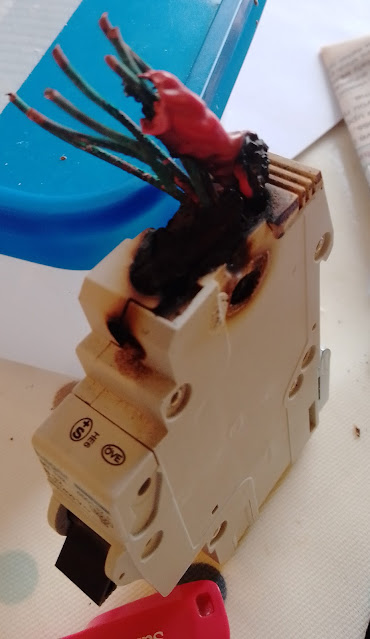 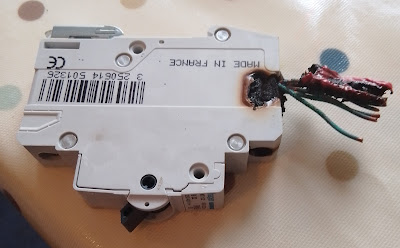 Had it continued to burn, there could have been a fire.
fbb did ask Graham why the circuit breaker didn't break the circuit.
"It's not designed for that," explained Graham  but with quite a bit more technical electrical metrical stuff. And he is right!
So don't think that your circuit breakers offer total protection.
What Are Windows For? 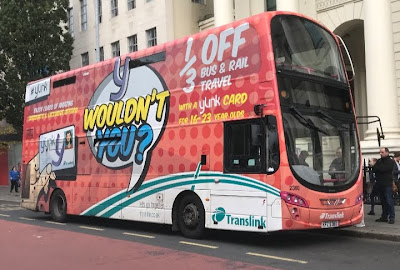 Not for seeing out of from in Ireland!

And not much better in London! 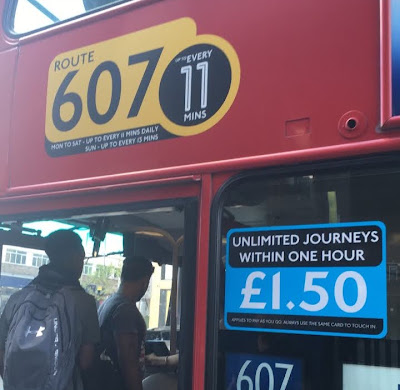 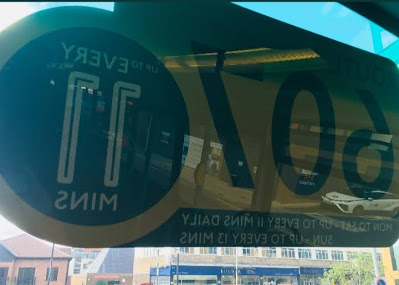 Go Ahead But Go Backwards 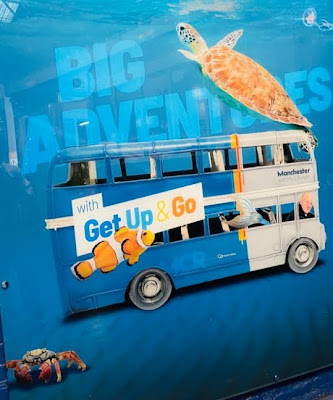 Go Ahead in Manchester have an new internal staff motivational campaign.

How motivated would you be if you thought that your company was going back to using Routemasters? 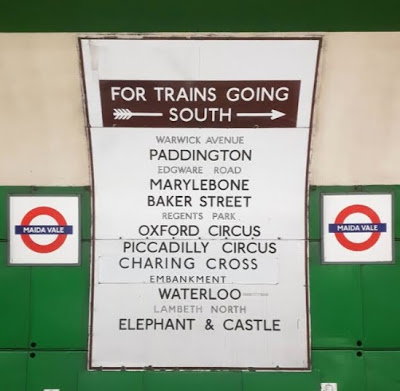 The above sign, dating from pre-war (possibly) is still on display at Maida Vale station on the Bakerloo Line.

So why are the words "CHARING CROSS" and "EMBANKMENT" not properly centred?