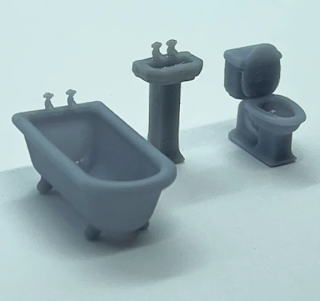 For the modeller who likes detail.  A company called "Model Railway Scenes" produces an eclectic range of small scenic details for the discerning modeller. They are 3D printed.
Above is an OO scale bathroom suite - wow!
But surely there is a problem. Modern bathrooms usually have frosted glass in their windows, so gazing lovingly through your amazing glazing at a detailed bathroom will be a bit of a failure as the particular porcelain pots will not be visible from outside the model!
Maybe a shop selling bathroom suites etc? Or rejects on a rubbish tip?
The Liverpool And Manchester Railway 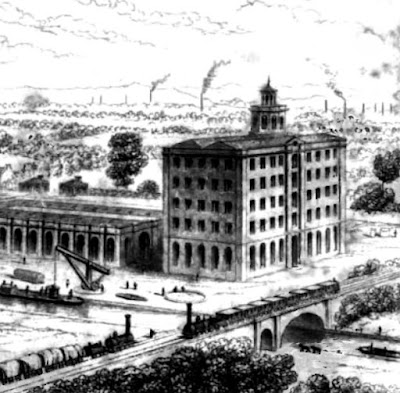 The Liverpool and Manchester Railway (L&MR) was the first inter-city railway in the world. It opened on 15 September 1830 between the Lancashire towns of Liverpool and Manchester. It was also the first railway to rely exclusively on locomotives driven by steam power, with no horse-drawn traffic permitted at any time; the first to be entirely double track throughout its length; the first to have a signalling system; the first to be fully timetabled; and the first to carry mail.
Trains were hauled by company steam locomotives between the two towns, though private wagons and carriages were allowed. Cable haulage of freight trains was down the steeply-graded 1.26-mileWapping Tunnel to Liverpool Docks from Edge Hill junction.
Designed and built by George Stephenson, the line was financially successful, and influenced the development of railways across Britain in the 1830s. In 1845 the railway was absorbed by its principal business partner, the Grand Junction Railway, which in turn amalgamated the following year with the London and Birmingham Railway and the Manchester and Birmingham Railway to form the London and North Western Railway.
The engraving above shows two trains passing near the Bridgwater Foundry. The site (to the right of the bridge) is where Patricroft Station noe stands. Of the foundry complex there is no remnant, the last bits having been demolished in about 2009. 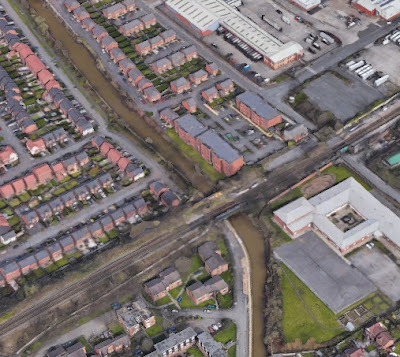 Google Earth provides a roughly equivalent view showing the station (upper right) and the bridge over a chunk of the Cheshire Ring Canal.
The L&MR featured some impressive engineering. The approaches to Liverpool were (and still are) through a deep cutting at Edge Hill ... 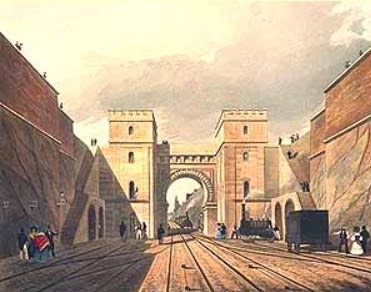 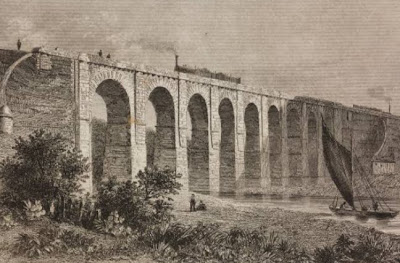 ... although its height and size were exaggerated for artistic effect! 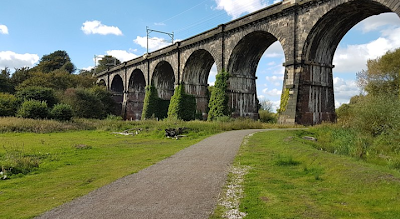 Less physically spectacular but an engineering wonder no less, was the crossing of Chat Moss. 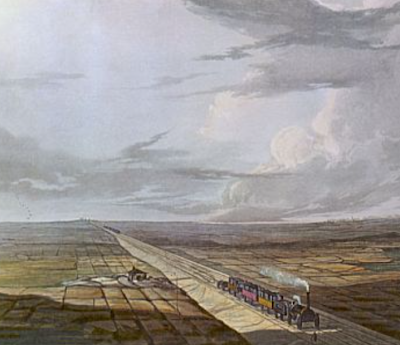 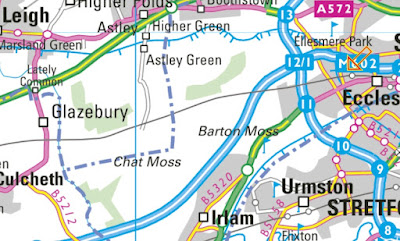 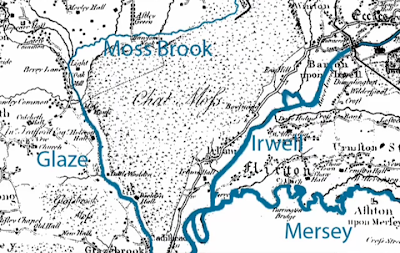 ... at the junction of four water courses.
Chat Moss threatened the completion of the Liverpool and Manchester Railway, until George Stephenson, with advice from East Anglian marshland specialist Robert Stannard, succeeded in constructing a railway line through it in 1829; his solution was to "float" the line on a bed of bound heather and branches topped with tar and covered with rubble stone.
This pioneering line needed a wide range of rolling stock to carry its freight and passengers, and it is some of these vehicles that Hornby has chosen to produce.
How accurate are the models?
One of the main sources of information and inspiration is an engraving dated 1833, just three years after the line opened. 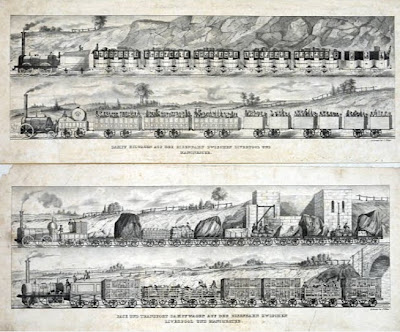 It shows a wide selection of trains together with passenger and freight vehicles. Coloured versions have been made, although there is always some doubt as to whether the colours are authentic. It would seem that Hornby has based its models on the tinted versions of this engraving.
Firstly, we observe the distinctive yellow carriages.

These were clearly First Class carriages for the first class of passenger and they formed the only rolling stock offered with the original Triang model. 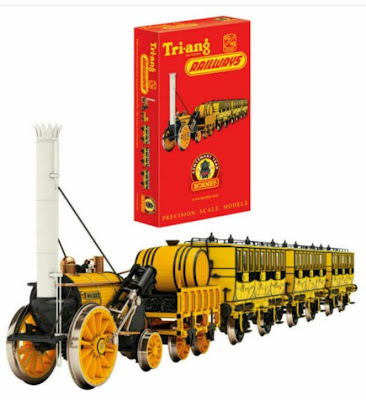 The next model to appear from Hornby was what might have been a Second Class "wagon" ...

... clearly visible in the engraving.

Other similar pictures show these blue vehicles with a rudimentary canvas (?) roof. 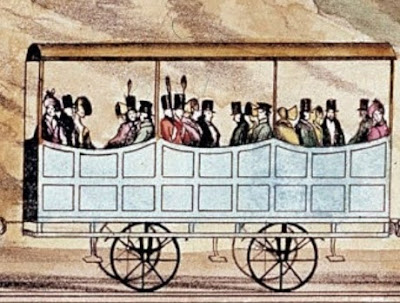 Two other passenger vehicles appear - one looks very much like Third Class ...

... with a centre gangway leading to two pens which, despite the paucity of comfort, were drawn as full of happy passengers by the engraver! These have not been modelled by Hornby.
Which leaves the goods wagons. These will be explored, engraved or modelled in tomorrow's Monday Variety blog.
L N E R Breakfast
A while back, fbb reported that LNER, the nationalised operators of the East Coast main line, was bringing back proper meals cooked on the train. Recent published is a photo of their breakfast choices, including their version of the traditional "full English". 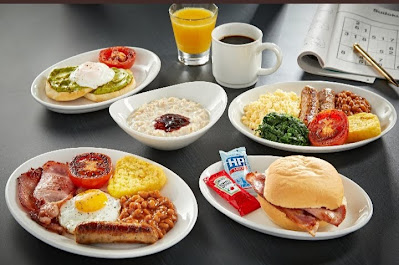 fbb presumes the picture is of a choice of four "mains" plus porridge, coffee and fruit juice. Likewise your resident gourmand and chubby blogger guesses that, unlike on the Trenitalia from Paris to Milan, you would not be able to order all of it! It might even be too much for fbb.
Looks good, but still not as good as the British Railways full breakfast! 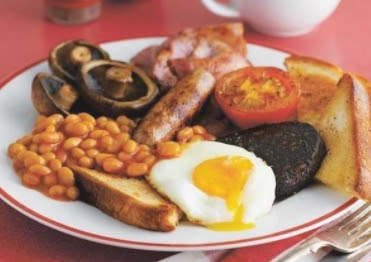 No fried bread, no mushrooms and no black pudding. And a solitary hash brown in place of saute potatoes. Not good enough LNER!
At Last, Die Cast Re-Cast 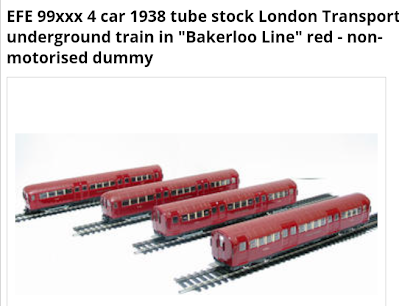 Interested readers may well remember the rather fine die-cast models that made up a four car Underground train. The set was not motorised, it was simply a static model.
Sometime back, Bachmann introduced a re-boot of the EFE brand. These were models produced for various outlets (often "exclusively"!!!) which Bachmann was now re-releasing.
One product which excited model enthusiasts was a powered version of the underground set. It has now appeared. 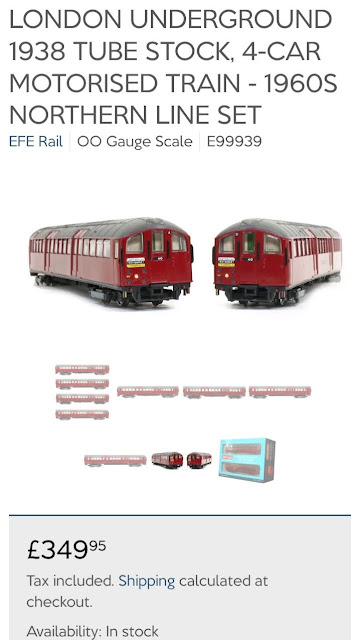 It's not cheap, but it has got TWO motors, necessary to haul the weight of die-cast metal along the tracks.
It is certainly a better model than the venerable battery operated Ever Ready set which existed in the early 1950s! 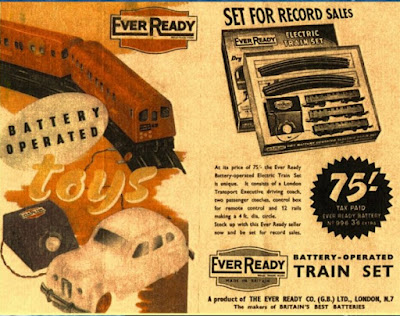 It was crude, and, for its day, expensive.

It cost the 1950s equivalent of £140 - which makes the new EFE four car unit slightly less of a shock even if you have to have the track and electrics already.
Sadly, a four car 1938 train would be very much out of place on fbb's layout. Perhaps he should build another one, station and bit of track only, buried underneath Peterville?
But if it were underground, and a bit like the bathroom suite, who would ever see it?
The real thing, by the way, looked liker this in the brighter red ... 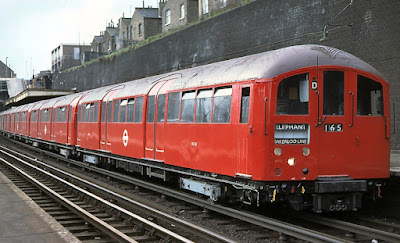 ... and in the earlier darker and unadorned red as in the new EFE model. 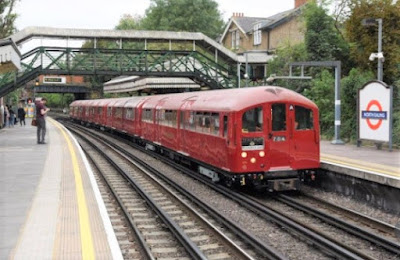 Next Variety blog : Monday 24th January
Posted by fatbusbloke at 02:00