It's That Man Map Again (A) 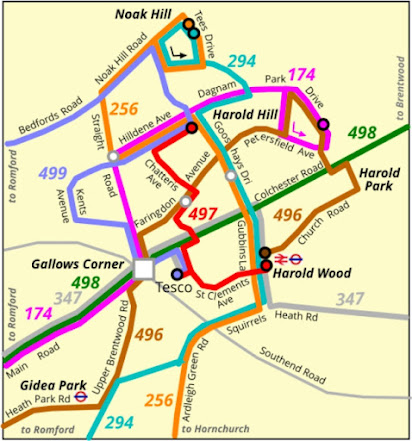 After a particularly busy week (well, busy for old codgers!), fbb finds drawing a map very therapeutic. almost relaxing. fbb was not sure whether to include the 347 because of its poor frequency; so it is included without any explanation.

Here, for comparison, is the extract fbb used from the wonderful Mike Harris map. 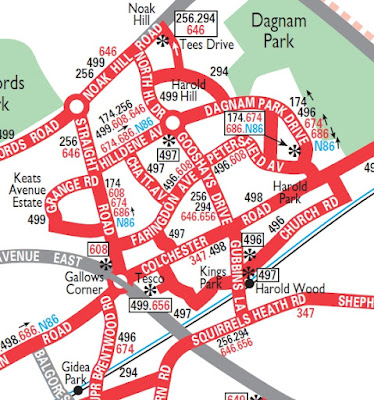 Of course Mike's marvel covers the whole of the red bus area, which makes fbb wonder whether he could EVER produce a similar work of art using route colours. fbb guesses that he will not live long enough to complete the task!
It would have to be bigger but it would be fun to try. Even more fun to try for money!
It's That Man Map Again (B)

Promises, promises! Cornwall Council's avowed determination to have a county-wide co-ordinated single network of bus services just has not happened; and shows no signs of ever happening. Go Cornwall was awarded the contract to run ALL the tendered services leaving First Kernow with its much smaller commercial network.
And the two simply do not acknowledge one another. Fares are not inter-available, even when Go Cornwall runs some evening journeys on a First Bus route. The promised "improved integration with train services" has been a non-starter and as for co-ordinated publicity, off go the flying pigs in swarms.
But one small development has happened. A map showing ALL OPERATORS' services has been produced. Roger French found them on a recent visit ... 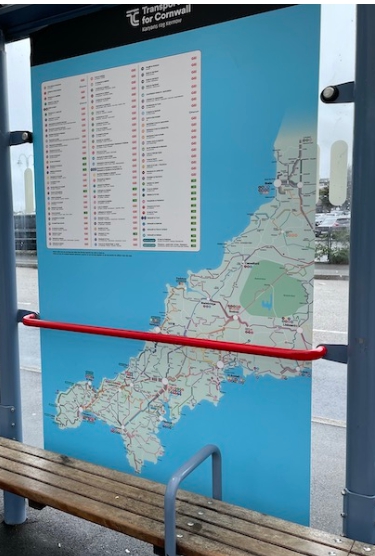 No paper versions have been printed, but the map does appear on the Go Cornwall web site, which sort of steps in for the Transport for Cornwall web site which also hasn't appeared.
It is what can best be described as geographically diagrammatic and struggles with detail in the urban areas. This is to be expected and it would have been helpful to provide an enlargement for places, like Falmouth, which are particularly complex. 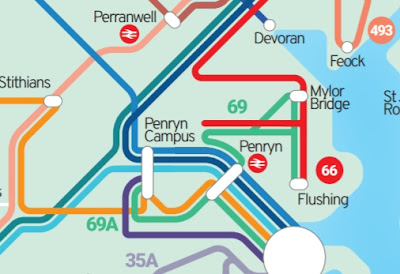 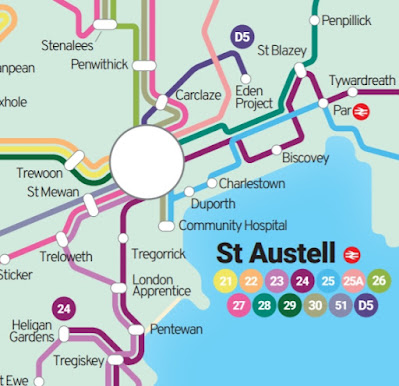 There is plenty of blue sea in which to plonk the results of blue sky enlargements cartographically.
But this excellent effort will soon be WRONG! And it is all Go Cornwall's fault.
Readers will remember that the Go Ahead company announced that it was starting competitive routes against First Kernow. So Go Cornwall eyed up First's route 27 between Snozzle and Bodmin. 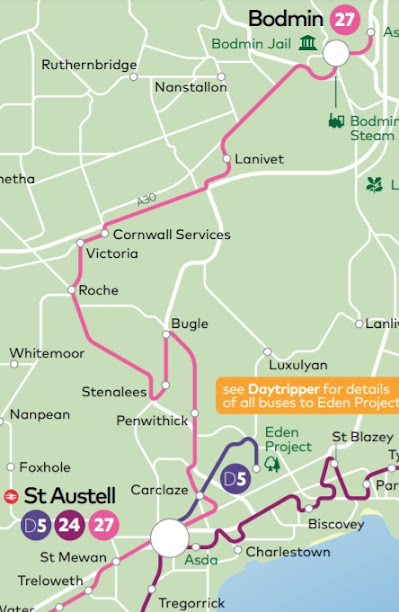 The hourly route is slow and wiggly in an attempt to serve both Bugle and Roche, pretty much the only intermediate communities of any size. Go Cornwall says, "We don't want to give you that!" We will run a 26 via Bugle and a 26A via Roche with each running hourly. Quite where two more lots of cash customers are coming from is unclear but ...
The various competitive services were duly announced and publicised then suddenly withdrawn "due to staff shortages". The new map shows the result. 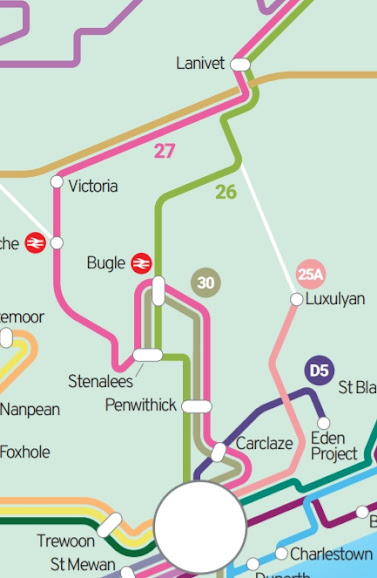 Go Ahead are running the 26 via Bugle but not the 26A.
But First have a cunning plan, a very cunning plan.
"OK" says First, "You want the Snozzle to Bodmin business commercially, you can have it". And they will be withdrawing the 27 between the two towns. First will use the "resources" to increase the frequency of buses on the rest of the 27, between Truro and Snozzle, to every 30 minutes. 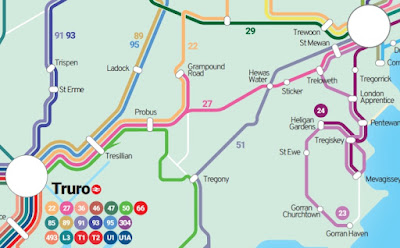 Go Ahead may well be pleased, but the residents of Roche will not be at all happy. They won't get a bus service.
So the Council will expect Go Ahead to run its two buses an hour service to Bodmin via Bugle AND Roche by starting the "delayed" 26A, leaving First to nibble away at Go Ahead's bits on the Truro road.
The passengers benefit, First Bus benefits with a better business on the shortened 27 and Go Ahead are lumbered with two buses an hour to Bodmin for which there simply aren't the customers.
What fun.
But the new maps will be wrong. Will the Council re-issue them?
Guess!
There's more that ISN'T on the new maps - which fbb will explore in due course.
An Expensive Model (A)
Oxford Diecast have been having a tidy up in their warehouse. Two  models offered "for sale" are "O" gauge ice cream vans. 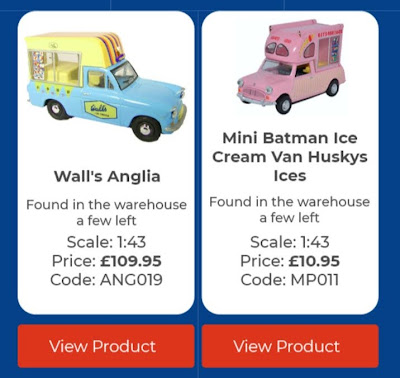 The Walls version looks a bit pricey for old stock!
Thankfully the bludner is corrected when you "View Product" and it is also a modest £10.95.
An Expensive Model (B) 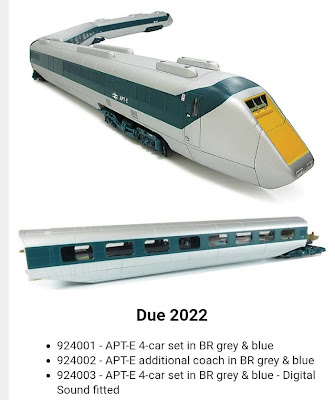 Rapido Trains is re-issuing its OO gauge model of one of the Advanced Passenger Train prototypes. This was powered by gas turbine engines and was filmed very fuzzily on the Midland Main Line in 1976.
One of the technologies that were promised with the APT project was a plasma gun for burning off the crud and grease on the rail to improve adhesions and increase speed. Plasma is like a controlled lightning bolt! It either didn't work or was never fitted (fbb cannot remember which) but modern trains still use sand.
Until now, that is? Northern Trains will be trying ice! 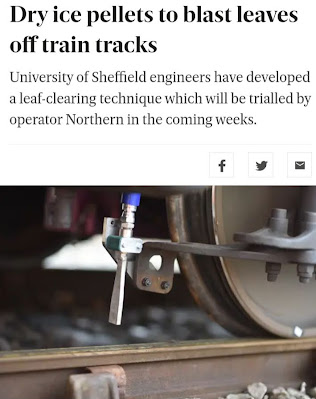 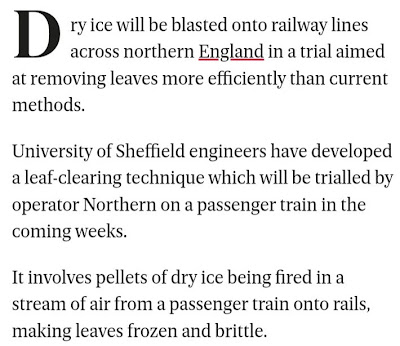 Bits of the real APT-E are on display (non working) at the Shildon part of the National Railway museum. 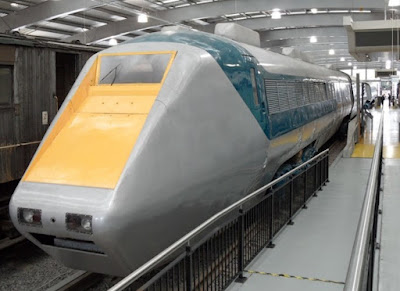 And you could own the model ... 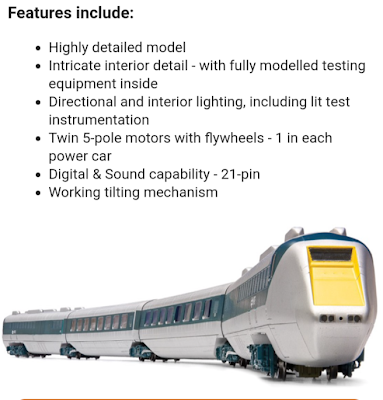 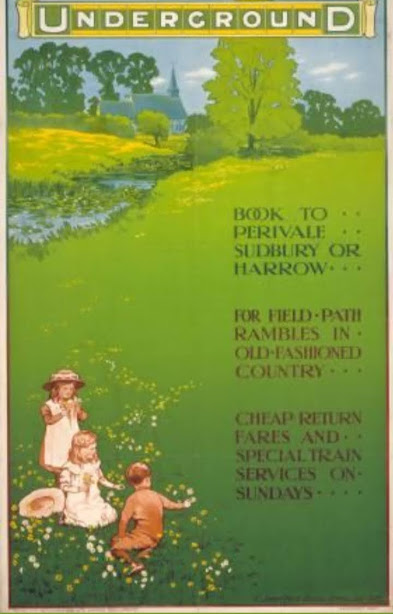 There is still quite a bit of greenery at Perivale ... 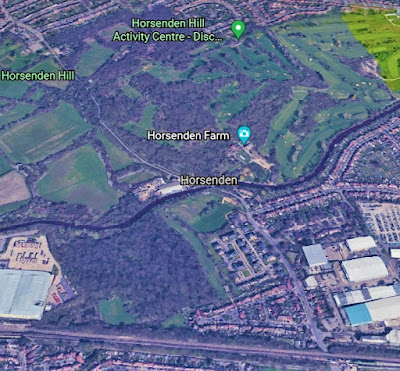 ... station bottom right. There is a nice park at Sudbury ... 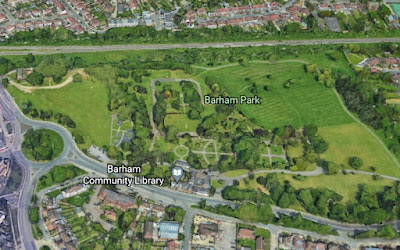 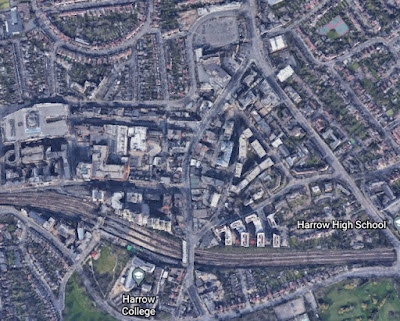 ... rambling in the countryside is unlikely!
But the poster and its appeal does show how revolutionary the Underground was in providing transport out of the murky Metropolis and into to idyllic recreation.
How It Used To Be (2) 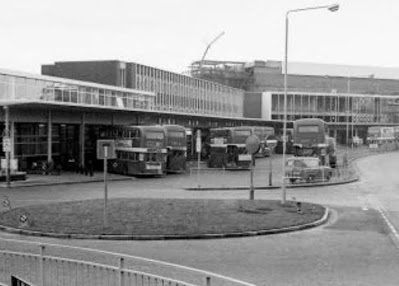 And how it looks now! 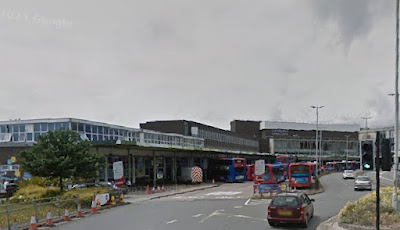 It's hardly changed a bit! Poole Bus Station, of course.
How It Used To Be (3) 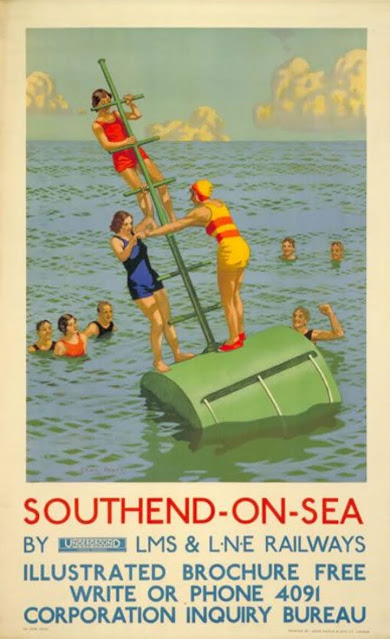 And how it can be today if the sun shines. 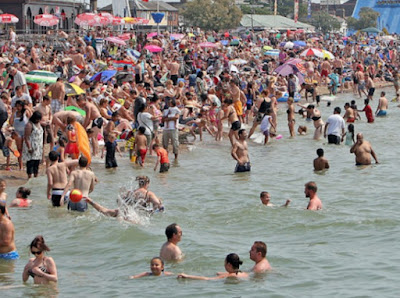 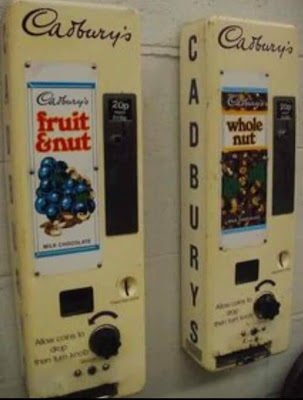 Not that long ago? Only 20p!
fbb would be used to paying a tanner!
Next Variety blopg : Sunday 10th Octoiber
Posted by fatbusbloke at 02:00