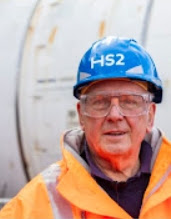 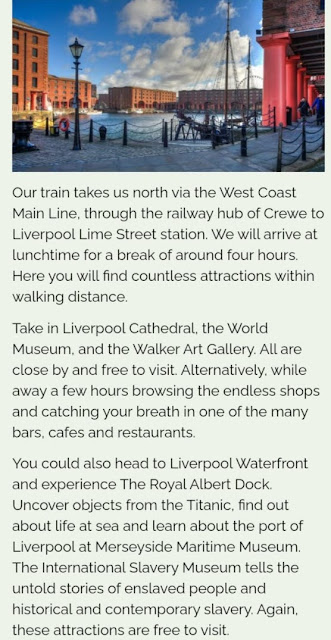 ... was on a rail excursion, called "The Yellow Submarine" (for some obscure reason) on Saturday last to Liverpool. There was lots to do when you got there plus optional paid-for excursions. Alan writes:-
On Saturday I was on an excursion to Liverpool. On that day Merseyrail had one of their new trains  on show at Southport station. 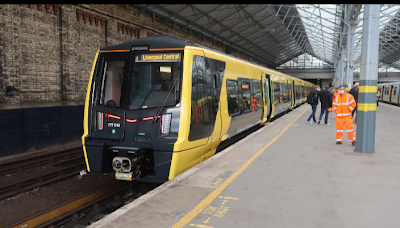 They were allowed to look inside ... 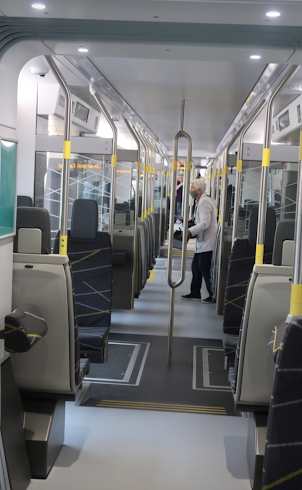 ... at the smart walk-through interior.
As Her Majesty has been advised to rest a bit, on Saturday she did not need her locomotives so we borrowed them. 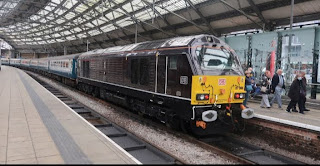 On the way home in order to give  the diners at the front of the train enough time to consume their soup, main course and  pud. etc, the train took an unusual route from Lime Street to Crewe.
Alan sent the fully detailed working timetable which fbb is quoting for the return as far as Crewe.

To help us all follow the schedule, Alan has also sent a map (click thereupon for a larger view). 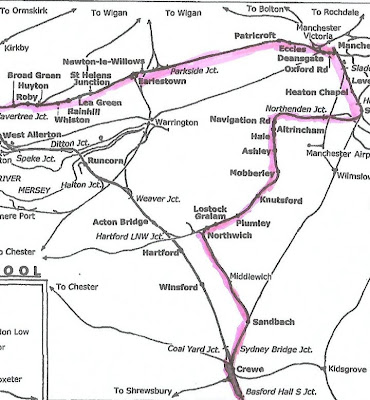 Hopefully Alan did not pay for First Class Dining, because that route would have been far too interesting to experience; much more fulfilling even than a quality first class nosh!
Alan did not send any pictures of any submarine whatever its colour!
fbb could buy a Corgi die cast model for £20 ... 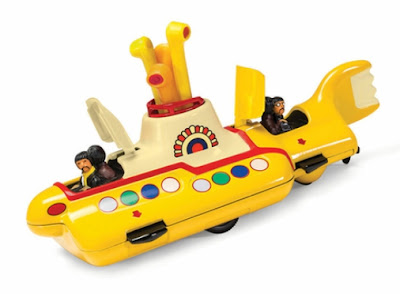 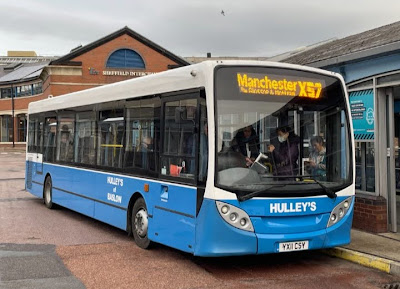 Roy sent this snap of the first departure from Sheffield yesterday morning - an X57 no longer running to Manchester Airport. It is in Hulleys ex-Silver Service heritage livery. 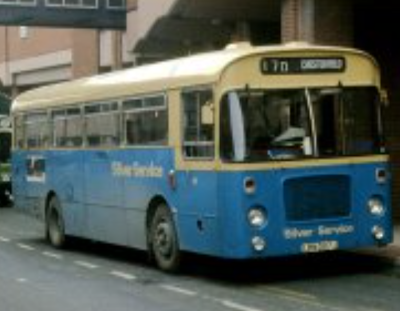 Presumably the X57 liveried bus would be inappropriate! 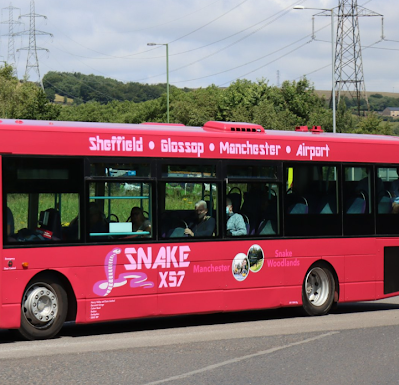 What Are Windows For? 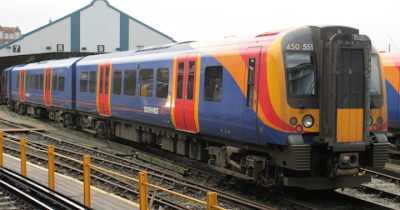 A Twitterer uploads a snap of a First South Western Railway first class 450 after refurbishment. 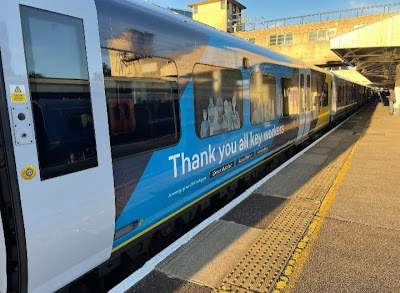 He is well pleased with the "thanks to key workers message" until he steps inside. And much to his horror he sees that the graphics have "contravisioned" several windows. 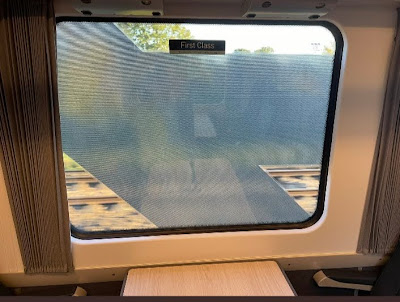 Windows are for looking through.
Snippet 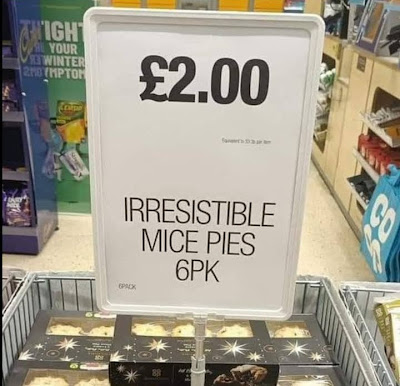 As advertised in a Co-op store near you? It is easy to make a typing mistake as fbb knows! He is very good at them!
It IS a mistake, isn't it?
The Guy In The Building Site PPE? 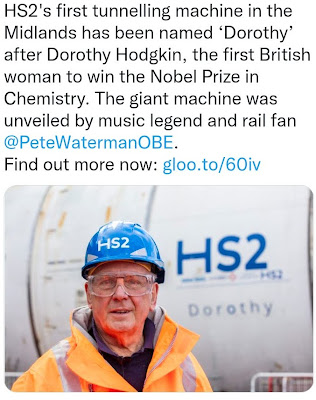 He's looking old, you know. But these machines are really big! 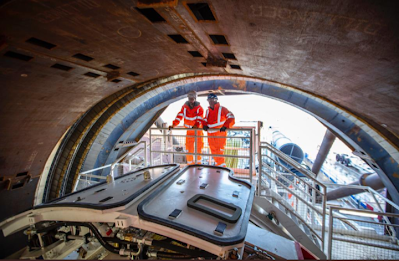 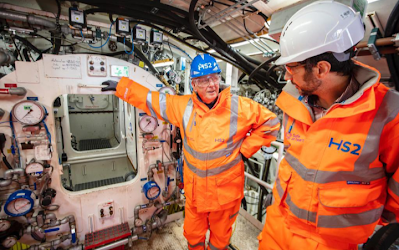 It is rumoured that Pete asked if he could play some of his pop videos on that screen.
And Dorothy Hodgkin? 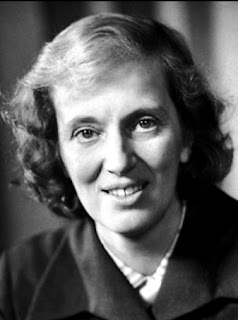 Dorothy Mary Crowfoot Hodgkin OM FRS HonFRSC (née Crowfoot; 12 May 1910 to 29 July 1994) was a Nobel Prize-winning British chemist who advanced the technique of X-ray crystallography to determine the structure of biomolecules, which became essential for structural biology.
Among her most influential discoveries are the confirmation of the structure of penicillin ... 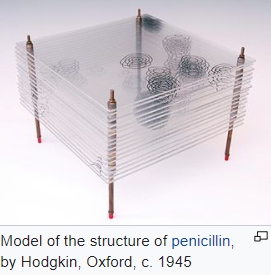 ... as previously surmised by Edward Abraham and Ernst Boris Chain; and the structure of vitamin B12, for which in 1964 she became the third woman ever and the first British woman to win the Nobel Prize in Chemistry. 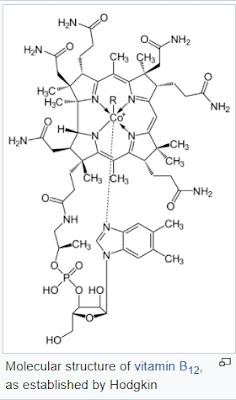 Hodgkin also elucidated the structure of insulin in 1969 after 35 years of work.
There is no record of her boring any railway tunnels!
And Now : What You Have All Been Waiting For.
First Sells Greyhound 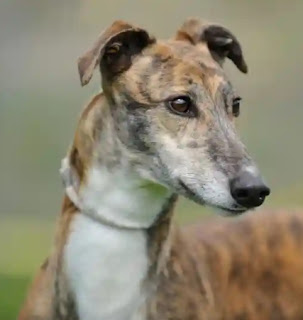 The fbbs had pals who acquired a "rescue" greyhound. It was very good at rushing round the back garden at huge speed but was absolutely terrified of stairs. It would neither go up or go down and had to be carried. Apparently there aren't any stairs on a greyhound racing track!
But not that greyhound - this greyhound!
They used to look like this ... 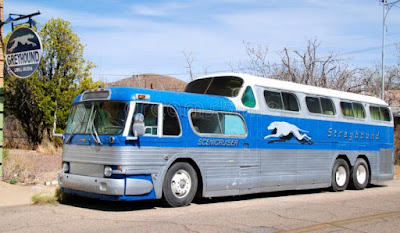 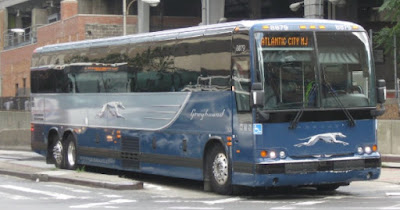 First Group has, at last, managed to offload its poor-performing operation which completes its withdrawal from the USA. Here is an extract from the lengthy press release. There is lots more on line, please feel free to undertake your own more detailed exploration of the mysteries of the Corporate World!
SALE OF GREYHOUND LINES, INC.
FirstGroup plc ('FirstGroup' or the 'Group') announces the sale of Greyhound Lines, Inc. to a wholly-owned subsidiary of FlixMobility GmbH ('FlixMobility') (the 'Transaction'), completing its stated strategy to focus on its leading UK public transport businesses.
FlixMobility GmBH is the parent company of Flixbus, rapidly establishing itself as the dominant operator of inter-urban coach services in Europe ... 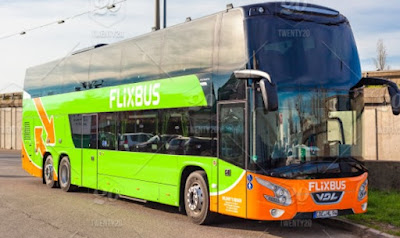 ... and slowly nibbling away at National Express in the UK. 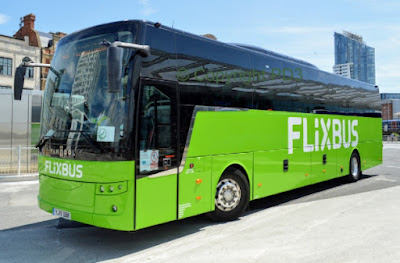 The Transaction results in cash consideration to the Group of $172m, comprising $140m paid initially, with $32m in unconditional deferred consideration paid in instalments over eighteen months
Greyhound properties with an estimated net market value of c.$176m will be retained by FirstGroup; they will initially be leased back to Greyhound at market rates but are expected to be sold over the next three to five years
So First will be keeping the property for the time being - presumably Flixbus didn;'t want it as their usual mode of operation is to contract out their services to other operators.
FirstGroup also retains certain legacy Greyhound net liabilities, including pension, self-insurance, and finance leases settled at closing, which in total were valued at $320m as at 27 March 2021, as well as grant receivables, buyout premia and other items estimated at a net cost of c.$47m, against which the Group had retained $197m of proceeds from the sale of First Student and First Transit earlier in the year
But First leaves the deal with a stonking heap of liabilities which will be "paid off" by the proceeds from Greyhound and from earlier sales in the US.
The $140m of Greyhound initial cash proceeds will be retained by the Group to support the close-out of these legacy liabilities and related net costs, with the balance of the property proceeds and deferred consideration resulting in c.$178m (c.£128m) in net value for the Group being realised over time
When the property is sold First reckons they will bank a modest $178 million from the disposal of its US companies. Bearing in mind the whole US caboodle was "performing well below expectations", this represents a good days work for the First Group bean counters. A few more beans to count. 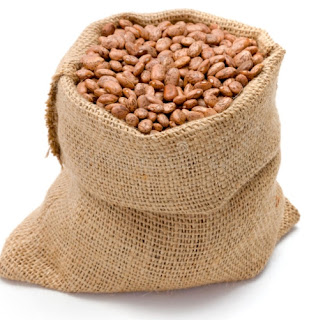 The Transaction is not subject to any closing conditions and will complete today
And no nasties in the woodshed! (At least, none that they have found so far!).
There has, as yet, been no comment as to whether Greyhound will be re-branded FlixBus. fbb reckons it will remain Greyhound but will gain the tag "brought to you by Flixbus".
And we remember that First brought the Greyhound name and concept to the UK 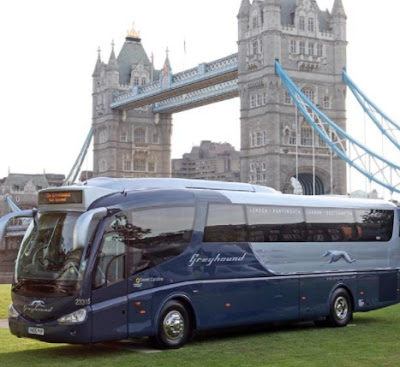 Well, it seemed a good idea at the time!
Next Loopy Problems blog : Tuesday 26th October
Posted by fatbusbloke at 02:00