Can We Get Rid Of Loopyness? Part 2 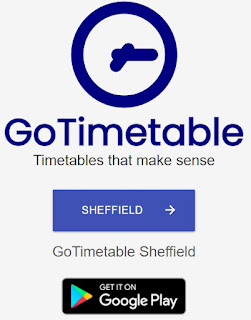 As many readers may know, fbb is part of a small team that delivers accurate timetables for the City of Sheffield as a downloadable App for Android phones or as a web site (www.gotimetable.com)  for all other devices. This involves sourcing and inputting timetables which are then available on-line or downloaded onto an Android device. With the latter, there is no need to connect to anything, the data sits there on the phone and is available without any signal being required.
But managing the data is tough. The updates due at the end of this week appeared just over a week ago. Various formats were used. First Bus has two on-line versions of the same timetables; one in the web language of HTML ... 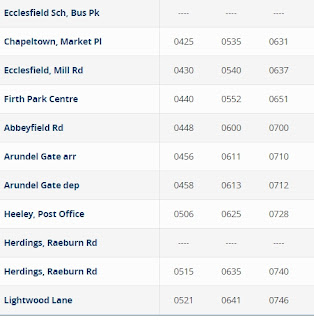 ... and the other as a PDF (Printer Definition File) of the same information. 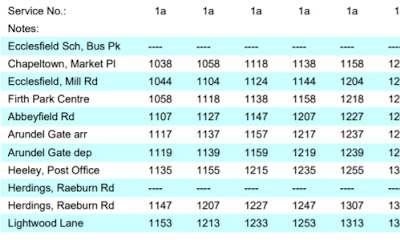 Stagecoach files are also a sort of PDF, but different from First's.

Because all this information was issued at short notice, South Yorkshire P T E posted a right pigs ear of a bit of everything. There was Stagecoach weirdness ... 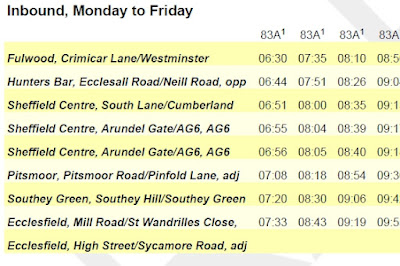 ... and a third version from First! 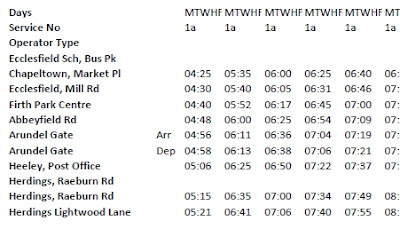 Later the standard PTE non-leaflets began to replace the mixture.
All of these are weird and wonderful varieties of output from scheduling software and none of them deal adequately with loops! GoTimetable works on the simplest form of tabulated numbers, namely a CSV (Comma Separated Value) file.

So fbb's job is to get whatever information he can from whatever source, to convert it to a CSV file and, in so doing, clear out the clutter including daftnesses like the two identical  "Herdings" lines in the above presentation.
This is a CSV file which drops easily into the inner works of GoTimetable.
Yesterday, we looked st the complexity of buses in Woodhouse. Four stops, three termini and plenty of opportunity for confusion. 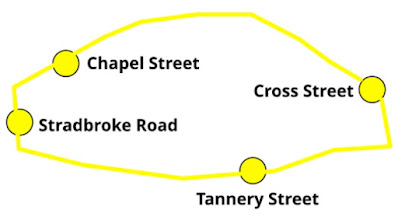 One of the Woodhouse termini is for Stagecoach route 52 at Chapel Street. 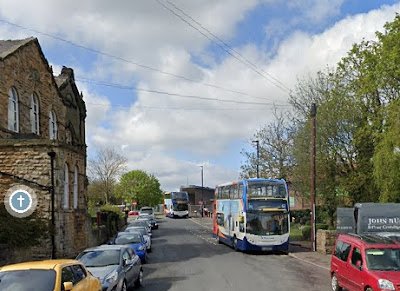 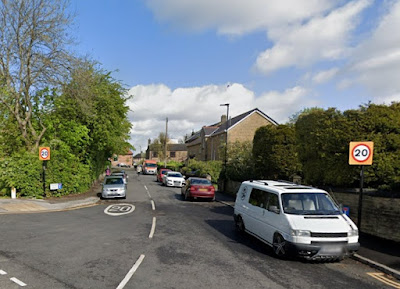 ... where a bus might be waiting. The other "half" of the partnership joint route is the 52a operated by First. 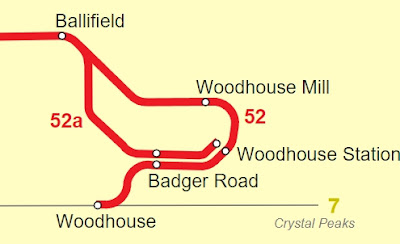 The 52a does not serve Woodhouse village but terminates at a dinky little turning circle near Woodhouse Station. 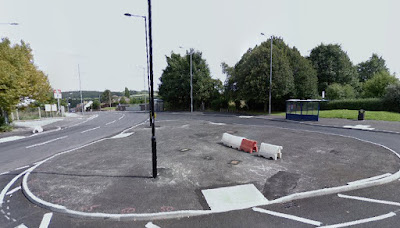 Of course, as in the simplified route map shown above, this does mean that buses are going to different destinations as they travel along Badger Road in the same direction. In the picture below the Stagecoach 52 is going to its terminus at Woodhouse ... 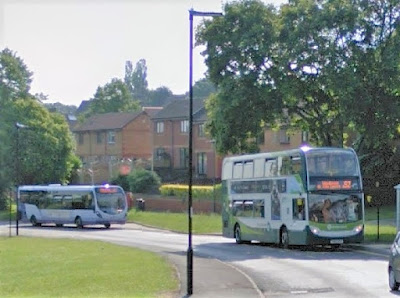 ... whereas the First Bus single decker is on its way into the city centre. But the loops are not a problem here. There is the challenge of explaining to the newcomer to the joint service how this works in practice.The PTE timetable does not really cope with this, but ...

... the non-printed leaflet does include a rudimentary map. But it still lacks enough detail.

For the updates due this coming weekend, fbb will be showing a 52 timetable and a separate 52a timetable but with both operators' journeys on the common section shown on both!
But at the other end of the route(s) things do get more complicated. 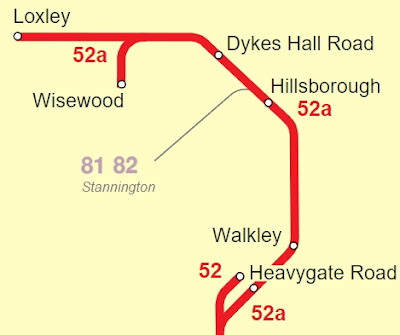 For most of the week Stagecoach 52 terminates at Heavygate Road where there is, of course, a loop. 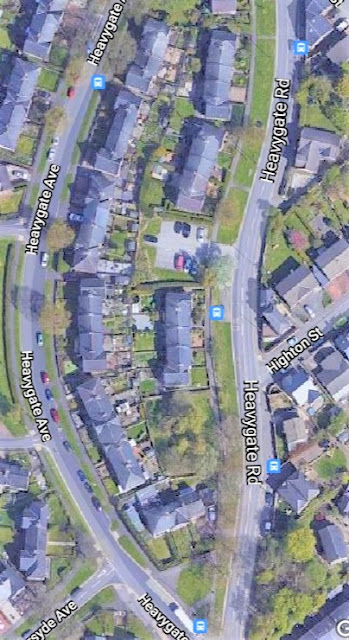 All buses run down Heavygate Road (from bottom to top of the Google Streetview map) and via Heavygate Avenue in the opposite direction, so Stagecoach just does a U turn at the far junction and you can just spot a bus at the terminus, bottom centre.. 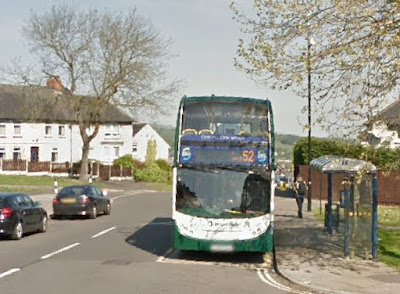 There is no need for special treatment of this loop as the stops are all close together, but why, pray does Stagecoach insert blank lines at its "normal" terminus when (early morning and evening) buses continue to Hillsborough. Likewise, First doesn't call there at all!

In fbb's  version everything has a time at Heavygate Avenue/Road. Incidentally long-term Sheffield residents would call this particular stop "Crookes" as it always was with trams and buses of old, before the route was extended down the hill to Hillsborough.
Buses terminating at Hillsborough use the "Interchange" which has (still has, remarkably) an enquiry office with a toilet! 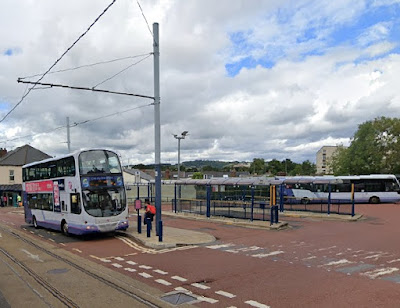 The Wisewood terminus has a small loop... 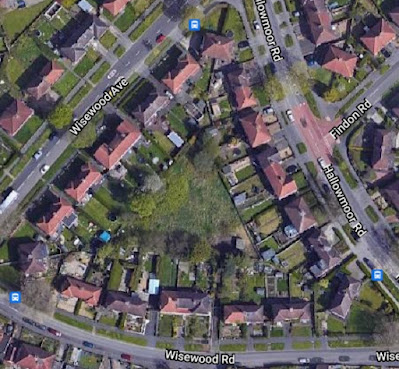 The time point is on Hallowmoor Road (picture bottom right - the other roads being too narrow) where buses will sit for about ten scheduled minutes. Boarding passengers will probably walk to neighbouring stops so showing the loop on a timetable is probably a case of too much information.

Here fbb was in two minds. 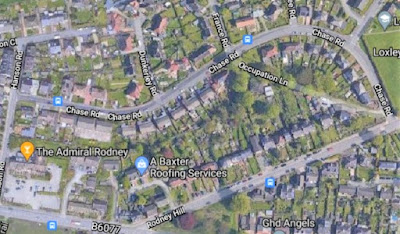 The terminus is on Rodney Hill (lower right), so if you see the 52 moving off ... 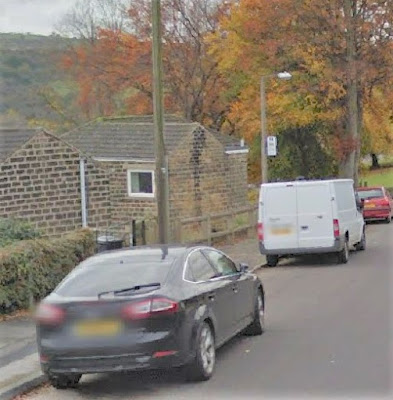 ... you could run back up the hill to an inbound stop after the loop.
So there data issues to be "managed" by fbb but on the 52 and 52a, the Loopyness is less of a problem than elsewhere. But big loops give big problems.
Recently, fbb was aghast about the lack of "jointness" of the joint 83/83a service; but it has  loops at both ends and they are big 'uns! Because they are big, you would expect passengers to want to go "the long way round" rather than trudge to a not-so-nearby stop.
fbb will elucidate tomorrow.
Try Again, Amigos! 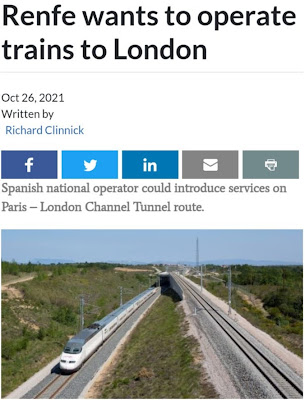 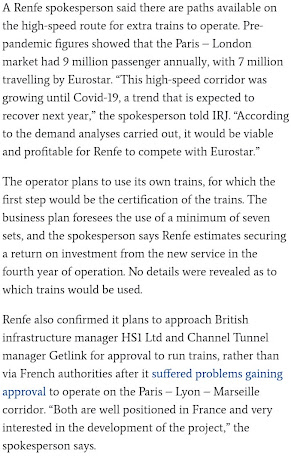 Hmm? Doesn't fbb remember another "approach" from across the Channel? 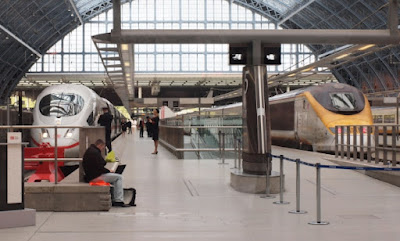 There were proposals from Deutsche Bahn to run via the Tunnel. 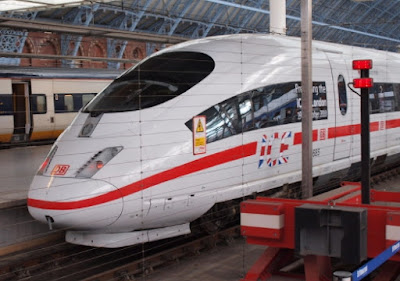 It all fizzled out, apparently because of the complexities of getting technical approval for the ICE trains. Will RENFE's super units fare any better? 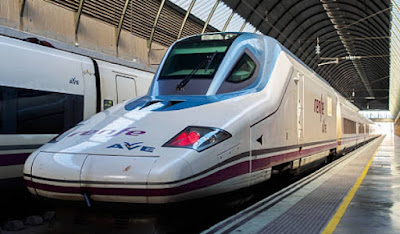 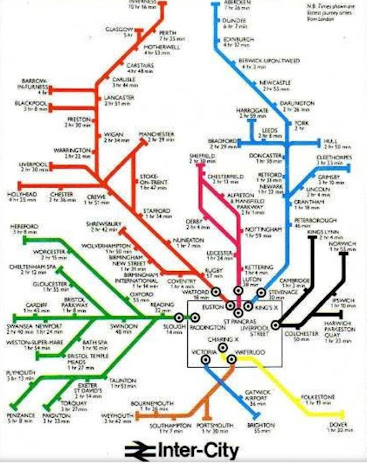