JUST Because Of  Driver Shortages - Really? 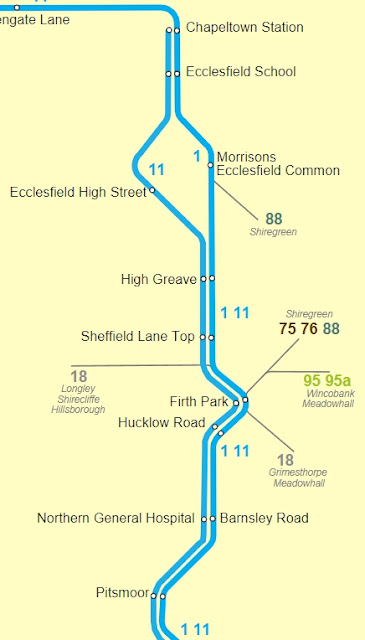 Under the great Sheffield Bus not-very-Partnetship a new linking was introduced in the form of a joint service from High Green (off the map top left) with First running via Ecclesfield High Street (as 1a) and Stagecoach running past their depot on Ecclesfield Common (as 1).

Then First took its bat away, dissolved the non-partnership and renumbered their bit at route 11 - to confuse people.

Part of the reason was to do with services to the south of the city centre. 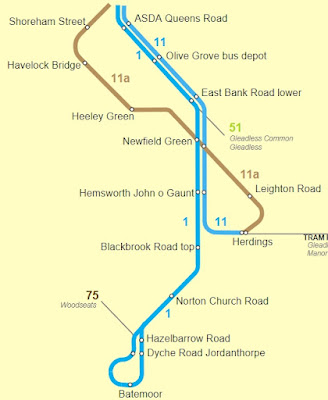 For some mysterious reason, they numbered their route via Heeley Green to Herdings as 11a although it really had very little affinity with the 11 as the map shows. There is more detail to the story, but too much for a part blog!

At the end of this month, the 11 on the north of the city is renumbered 1a, which is what it was in the first place. 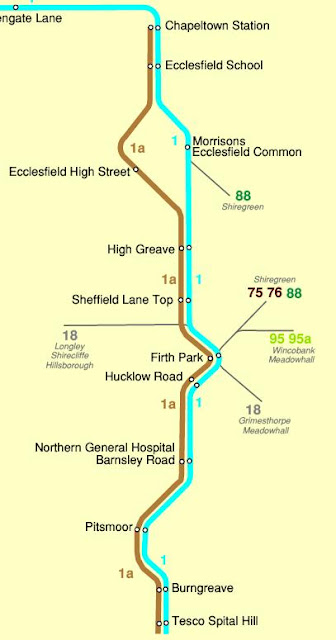 Confused. com?
Sheffield passengers will be! But it is all change south of the city. 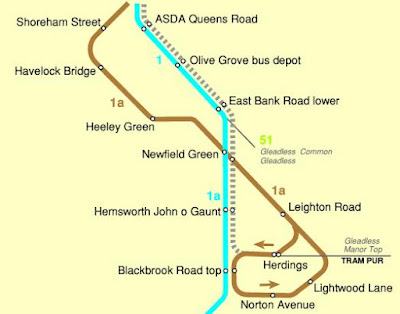 What was the 11a via Heeley Green is now the 1a. The 11 via Olive Grove and Hemsworth is withdrawn completely. The 11 and the 11a were each every 15 minutes; the new 1a is also every 15 minutes. So the bean counters have saved/lost/withdrawn a 15 minute service between the city centre, Hemswothr and Herdings.

The old 11 and 11a "terminated" at a very swish turning loop on Raeburn Road ... 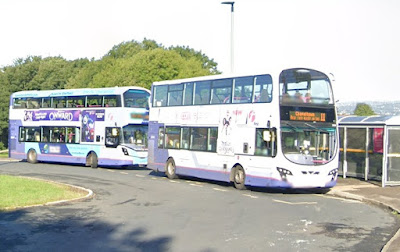 ... which is opposite the Tram Terminus. 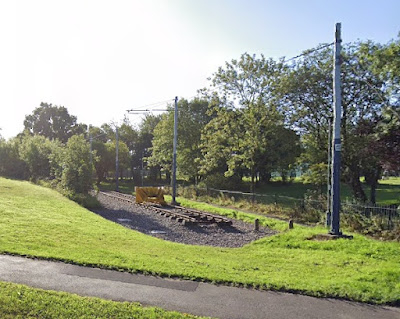 For reasons that defy any common sense, the schedulers at First have decided to add a loop at the end of the 1a. It is a big loop and fbb will be trying to show it adequately on the timetables which will appear on GoTimetable Sheffield. 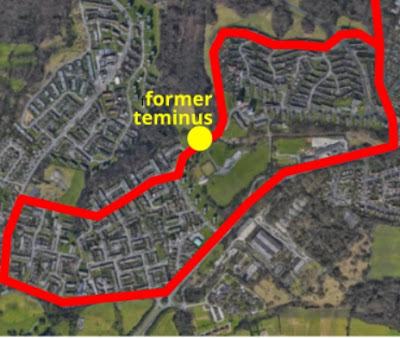 Now First Bus tells us that all these cut backs a "just temporary" and services will revert to "normal" as soon as possible.

So the new 1a will disappear and the old 11 and 11a with return with a whelp of joy?

There are those who will suspect that the so-called "Partners" are using the Driver Shortage as an excuse to cut services by up to 30% and many will not return to their previous frequencies for the foreseeable future.

Surely these responsible organisations would not tell porky pies to their loyal public?

Thee spectacular 3D map of a significant chunk of the Metropolis has moved from The Builder Centre in Bloomsbury to the hip-hop and happening place where its at just north of Kings Cross.

Now on display at Coal Drops Yard is the largest ever 3D model of London, commissioned by New London Architecture and sponsored by OS.

The model is 12.5m long and at a scale of 1:2000, featuring 19 boroughs, around 170,000 buildings, and covering over 80 square kilometers of Greater London. It extends from King’s Cross in the north to Peckham in the south, and the Royal Docks in the east to Old Oak Common in the west.

Since the above was written back in 2015, the area covered by the map has been progressively extended.

The above video was for the original launch at the Builder Centre.

... but knows not which team plays there!

Then there was Hyde Park and Buck House ...

... and the ex-Olympic stuff at Stratford. 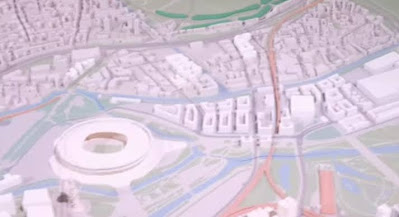 The orange bits are transport infrastructure which makes Waterloo station ... 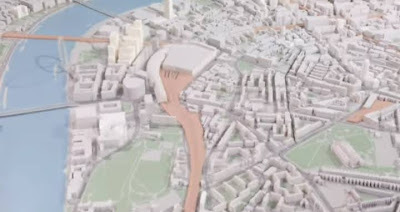 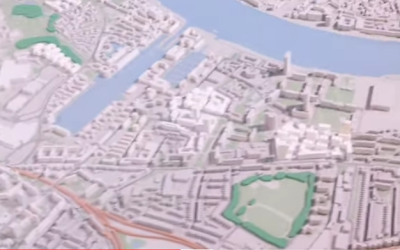 ... is the former dock at Rotherhithe and the park at Deptford.

It would be good to speak time on the Coal Drops Yard to spot the various landmarks, and, for fbb, some of the transport links. There are, of course, some better pictures on line ... ... here with the distinctive peak of The Shard in the middle distance. 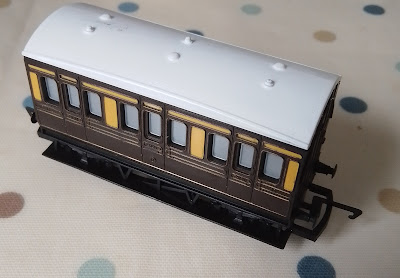 The grey windows on one of fbb's little "heritage" coaches, bought cheap and second hand from an on-line supplier - actually Rails of Sheffield. One of the varieties scheduled from Hornby, for example, is a generic brake van. 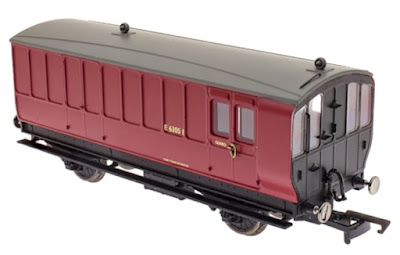 Could one be turned into a shorter version of the other? 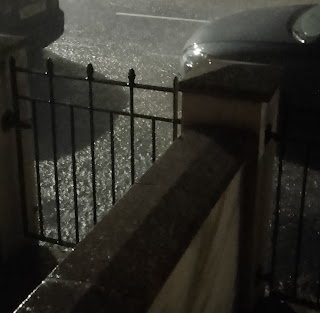 It rained yesterday evening. Quite a lot! At 2030 the water filled the gutters and covered kerb and pavement. Rain was coming UP out of the drains. 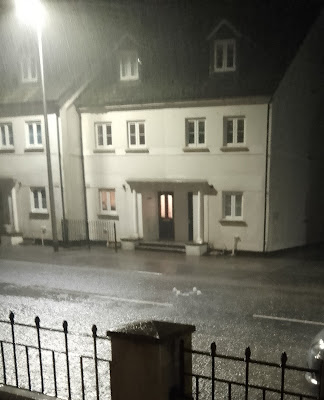 Next door's front "yard" was already inundated and probably wet was finding its way into their hallway. 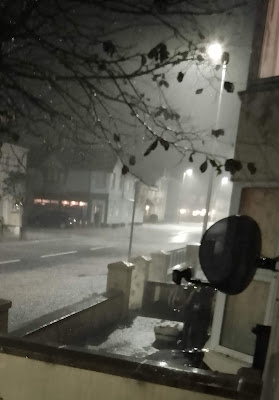 The Monsoon had abated to a downpour by 2100.

Next Book Review blog and other stuff : Friday 22nd October