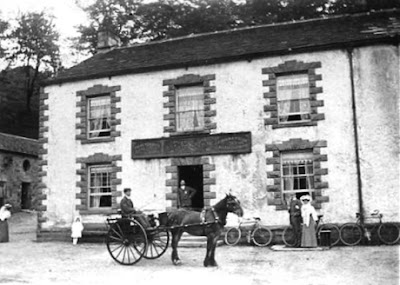 The Snake Inn (later the Snake Pass Inn) actually gave its name to the steep and winding A57 Snake Pass between Sheffield and Glossop. Once carrying a joint service 39 from Sheffield Transport and North Western, its through bus service faded away many years ago. The iconic inn is now a private residence. 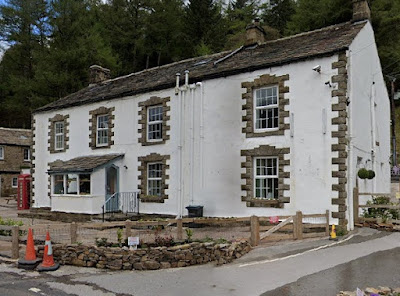 No longer do 39s call there for their refreshment stop! Indeed the Snake Road has not had a proper bus fir some considerable time.
That is until an innovative and positive new management for Hulleys of Baslow started service X57. 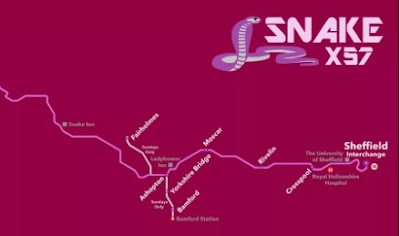 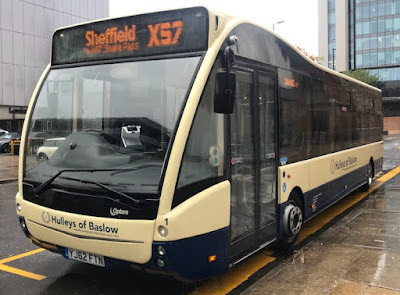 It has had a chequered history with all sorts of problems, not the least being when the Snake Pass is closed for weather, accident or maintenance.
A chum of No 3 son who lives in Glossop (the chum, that is) started using it to get to part of his higher education course at one of the hospitals on the X57 route latterly extended to Manchester Airport. His experiences are not positive!
After attempting to catch it 6 times, twice it didn't arrive. EVER. Twice it was 50 mins late and twice it was 40 mins late.
So disappointed. I was having to catch the bus 2 hours before my lectures started... Which meant getting up at about 530.
So I'm catching the train.
The current (just current!) Mon to Sat timetable is here ...

... but its replacement from Sunday onwards is but a shadow of its former self.

Are we seeing the beginning of the end for the X57?This is what the company says:-

A BlueMo for Lumo?
First Rail's new open access train service between Kings Cross and Edinburgh starts on Monday with a basic service of two trains each way. Wikipedia tells fbb that "LUMO" is an acronym for the Lowest Unoccupied Molecular Orbit, so that explains everything.
Somewhere, fbb saw an explanation involving Luminous and Movement, so that explains everything again.
fbb is sure all the blue train's customers will be excited such a meaningful brand name.
Anyway there was a launch earlier in this week. Kings Cross went blue ... 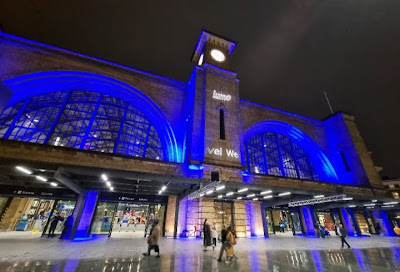 ... with a blue archway on the platform. 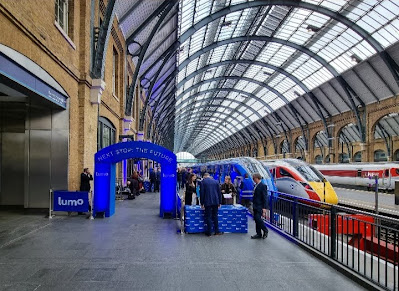 The glitterati of First Rail were arrayed before a blue background ... 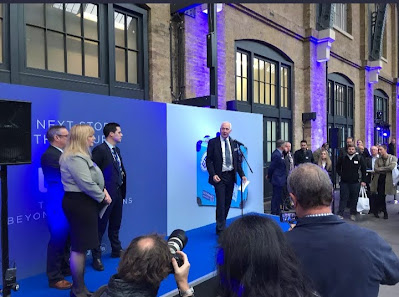 ... and blue lights played on the blue coaches. 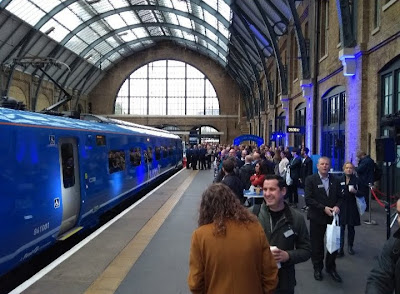 Tim Dunn was impressed with the extra leg room ... 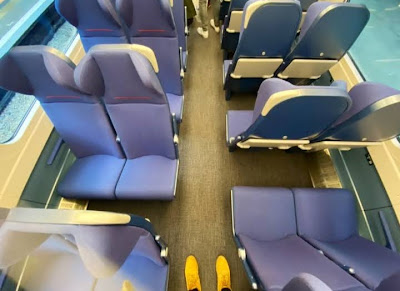 ... and one observant twitterer, when asked what the trains were like said ... 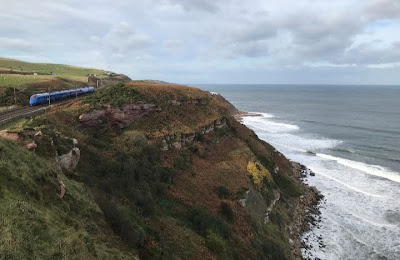 ... "they are very blue." How true.
The "preview" train was duly welcomed into Edinburgh by the obligatory lone piper - piping! 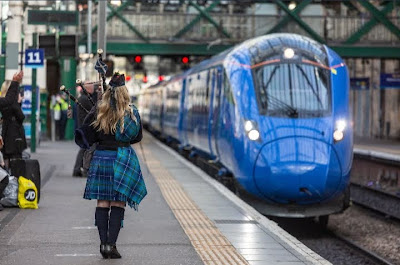 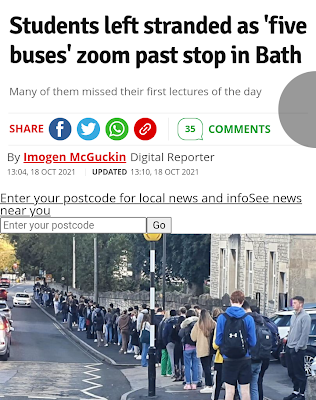 The above was reported a couple of days ago.
Here are more headlines ... 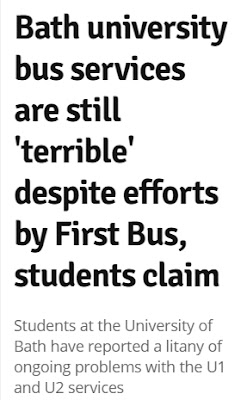 ... which were published in 2018.
Someone needs to get it sorted - AGAIN!!
First Buys And Sells (1)
The wonders of the corporate world are mysterious in the extreme and recent news from First Group in refers to some very big bags of money.
The "buying" involves this operation.

Somerset Passenger Solutions is a partnership set up to provide the huge number of buses needed at the Hinckley Point Nuclear Power Station site. 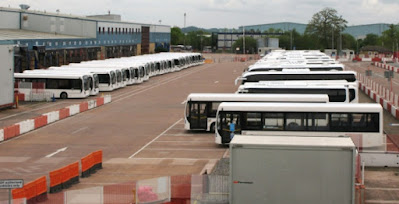 Surprisingly it is in Somerset.
The requirement is large because no private cars are allowed on site; they all have to use specially built Park and Ride sites. There is one on the A39 Cannington by-pass. 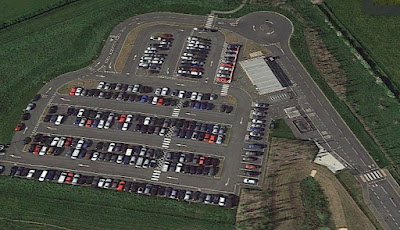 The business was a partnership between First Bus and the owners of a former competitor of First, namely Crosville of Weston Super Mare. 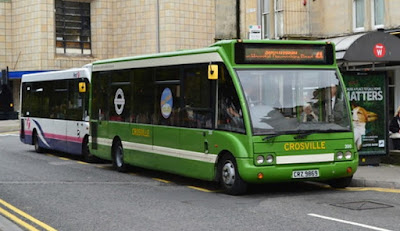 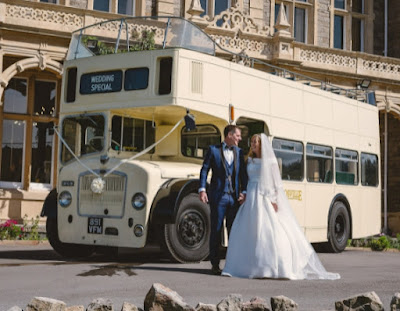 Anyway First have just bought out their partner's share.
FirstGroup plc (‘FirstGroup’) is pleased to announce that its wholly-owned subsidiary, First South West Limited, has acquired the remaining 50% shareholding in its Somerset Passenger Solutions Ltd (‘SPS’) joint venture. The shares have been acquired from JJP Holdings (South West) Limited (‘JJPH’), giving FirstGroup control over the business going forward. The consideration, being funded from FirstGroup’s existing cash resources, is £8.4m, paid on completion, with potential deferred consideration of up to £1.6m if certain conditions are met.
SPS, which started in 2016 as a joint venture with 50/50 ownership between First South West Limited, and Somerset-based JJPH, operates the contract to provide transport for workers employed at the Hinkley Point C nuclear power station near Bridgwater.
The company has grown in accordance with the increasing amount of work on site and now employs around 450 people running a 156 vehicle-strong operation, delivering shuttle services seven days a week to and from Hinkley Point C. The business has annual revenues of approximately £37.0m. The purchase of the remaining 50% of SPS shares forms part of the First Bus strategy to develop and grow its share of the business-to-business services market.
The acquisition constitutes a Class 2 transaction pursuant to the UK Listing Rules. For the purposes of the LR 10.4.1 R (Notification of class 2 transactions), as at 31 December 2020, the gross assets of SPS were £9.62m, and the profits attributable to it were £3.95m.
So now we know!
A First Group "sale" will feature in tomorrow's blog. Bet you can't wait?
Electrics In Newcastle 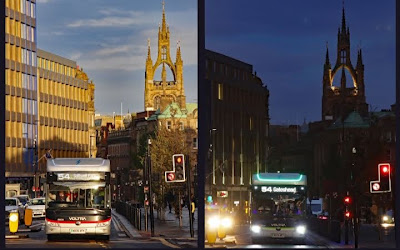 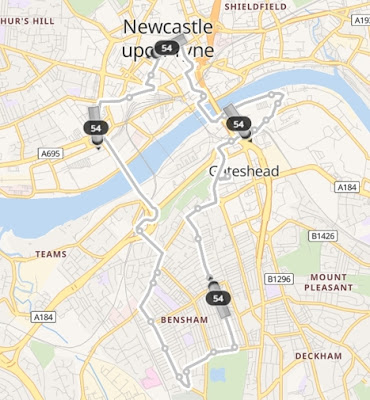 ... is in the hands of a fleet of Yutong electric buses. 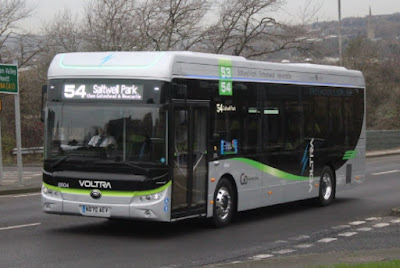 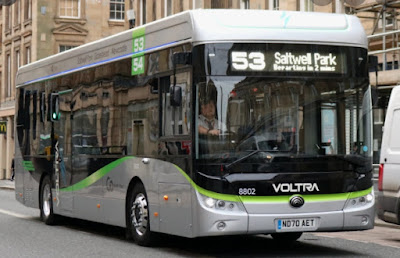 The 53/54 has been re-routed recently to take up some of the route of the former Quaylink/QuayCity service in Gateshead, now withdrawn. 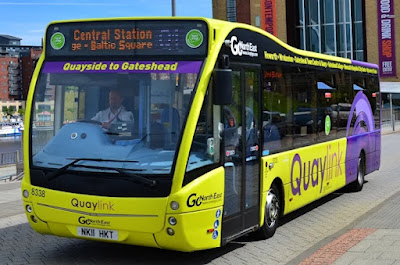 For the record, the Q3 Quaylink on the Newcastle side still runs from Wallsend to Gosforth and Great Park.
Next Variety blog : Sunday 24th October
Posted by fatbusbloke at 02:00