Can We Get Rid Of Loopyness? Part 3 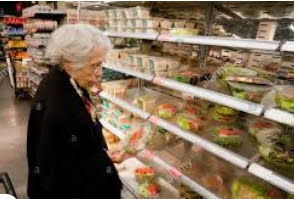 Mavis Thrucklebackit quite likes Morrisons. They do good quality meat and some very nice cakes. So she should really enjoy a trip on the 83 or 83a bus from the stop almost outside he house on Volley Crescent ... 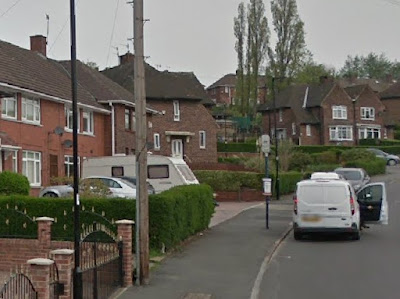 ... to the store on Ecclesfield Common, just a few stops away. 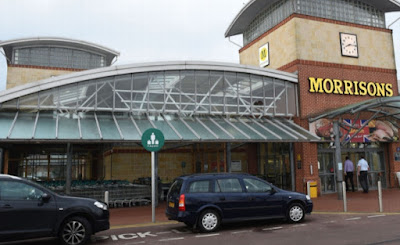 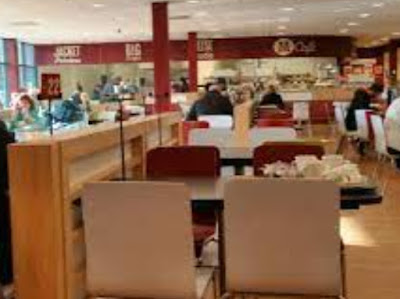 ... so she can have a bite of lunch and save herself from having to cook. Not long ago the 83 and 83a ran every ten minutes, but now ** its a right mess. Buses seem to come when they want, and only the Stagecoach ones stop at Morrisons.

Grandson Gavin tells Mavis that First buses do stop at Morrisons because he has checked on the journey planner.

But when Gavin checks for the return journey, again on Traveline, all options seem to be really inconvenient. 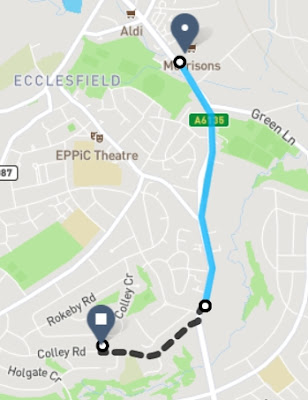 That's quite a walk using Stagecoach service 1. So is this ... 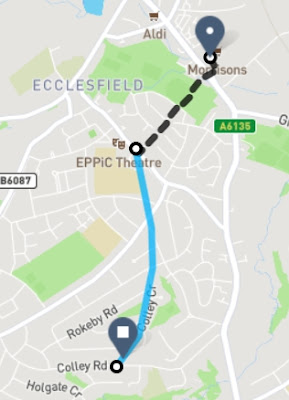 ... Walking to EPPiC Theatre across the park and down Sycamore Road. 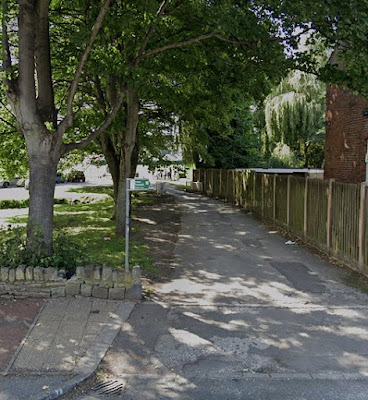 Or, says the journey planner, you might as well walk all the way. 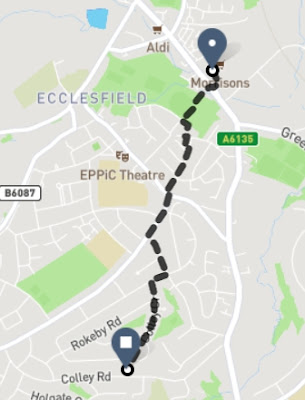 But none of these is suitable for Mavis as her knees are not too good, and she would not be able to carry her shopping/
But surely the 83A comes back from Morrisons.

But there's no time for Morrisons and what with the weirdness of the 83a and 83 buses' not being spaced out, Elsie usually books a taxi, A couple of friends join her so it's not too expensive and, of course, very reliable.
"Why can't they give us a time for leaving Morrisons", Elsie asked Gavin - who does not know.
But fbb knows a man who can. Here is an extract from the 83a timetable that will appear on the GoTimetable App this coming weekend.

Early journeys leave the store about 3 minutes before departing from Mill Road, the "terminus". 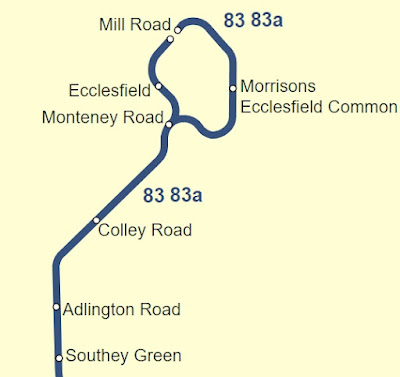 ... but later in the day you have to hang around enjoying the view of Mill Road for up to 15 minutes. 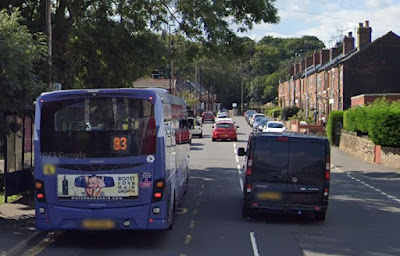 Exciting, isn't it?
So why hang about? Why not have the bare minimum of layover at Mill Road?
The answer is that there is another huge loop at the other end. 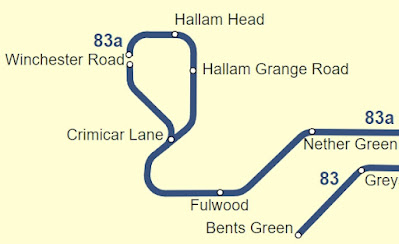 And the problem is just as bad there. At what time would Ernest Thrubley need to catch a bus from Hallam Grange Road ... 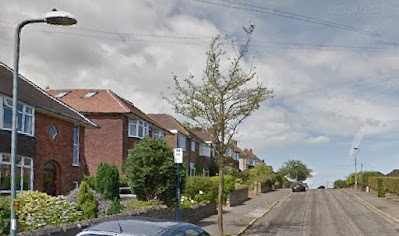 ... so sometime between 0902 (outward at Hunters Bar) and 0917 he would need to be at the stop. Maybe he would walk to Crimicar Lane rather than risking the uncertainty?
In fact fbb has again attempted to be helpful ... 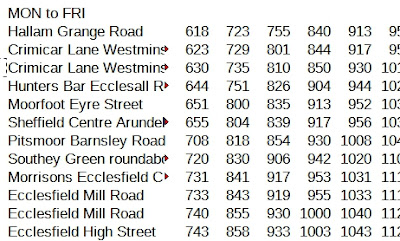 ... and, again the bus sits at its "terminus" for nearly 15 minutes. If Ernie were fit and it wasn't raining he would be well advised to walk to Crimicar Lane, a sprightly toddle of less than 10 minutes, in which case he doesn't need to set off until 0920, maybe time for an extra slice of toast?
Roughly speaking, on a round trip time of 2 hours and five minutes, abound 26 minutes of layover time is added.
Even to an amateur like fbb this seems a wasteful schedule.
How about turning the 83a at Mill Road via the small loop as seen on the PTE map, then running back via Morrisons? 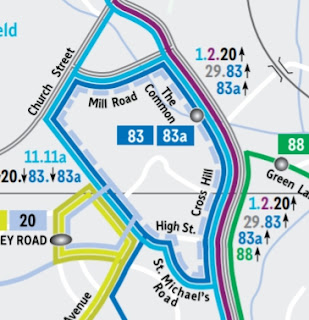 And at the other end, running along the 51 route to a comfy turning circle at Lodge Moor. 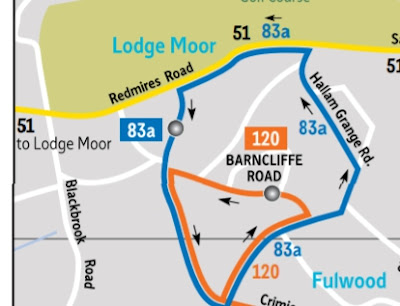 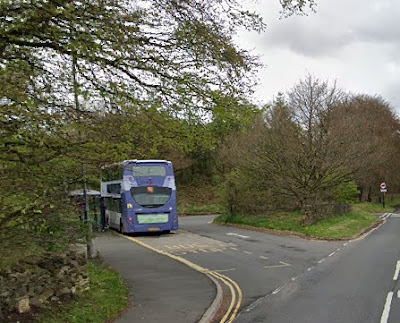 Oh. no; that might cost you an extra bus, Stagecoach. Shock Horror. On the other hand, removing both loops and producing some good quality printed leaflets distributed house to house (Shock Horror - again!), you might need that extra bus to carry the increased passenger numbers?
Loops may look good on paper, economically serving a wider geographical area, but they are usually bad for the public and badly advertised.
Remove Loopyness wherever possible, certainly big loops, and, you never know, you might attract some extra passengers. If you MUST have loops, at least try to schedule and advertise them in an attractive way, reducing hefty layovers half way round.
In the latest Buses magazine, Roger French has one of his oft repeated mini-rants. He suggests that managers should get out more. 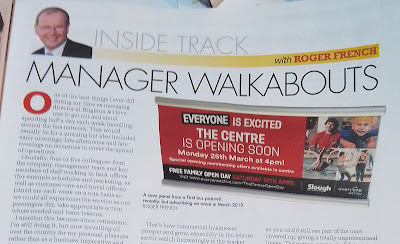 Hear hear!!
The car card illustrated is, of course, wildly out of date. 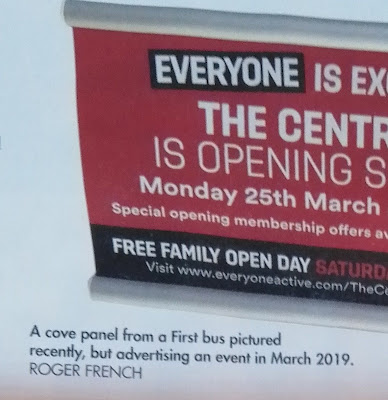 One thing that Rog rails against is the poor quality of bus stops. We shall meet this Derbyshire example next week. 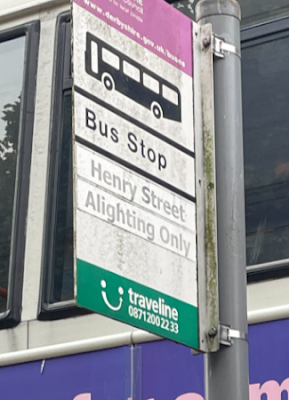 Here is what Mr F says on the subject:- 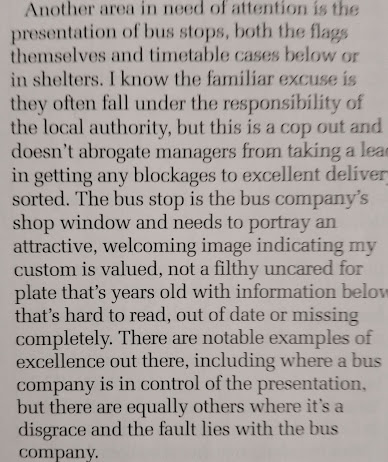 And here is his conclusion, particular and specific.

Maybe the Sheffield bosses should experiment with journeys round the many awkward and badly explained loops.
It would be a revelation and might lead to a revolution!
** The quoted times are from the NEW timetables due on Sunday 31st October; or is it Monday 1st November - operators and PTE do not agree.
Mavis Thrucklebackit and Ernest Thrubley do not exist of course. But they were key and repeated characters in fbb's English lessons to class 6B at Birkdale Prep School between 1966 and 1970.
Fond memories, eh?
Next Variety blog : Saturday 30th October
Posted by fatbusbloke at 02:00