Service Provided by a Scouse Partnership (1)

Scouse is a type of lamb or beef stew. The word comes from lobscouse, a stew commonly eaten by sailors throughout northern Europe, which became popular in seaports such as Liverpool. 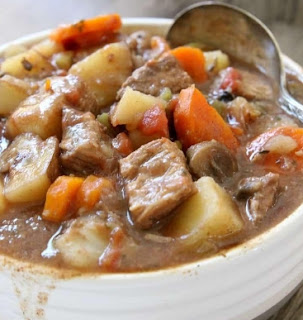 The Oxford Companion to Food says that lobscouse "almost certainly has its origins in the Baltic ports, especially those of Germany". Similar dishes are traditional in countries around the North Sea, such as Norway (lapskaus), Sweden (lapskojs), Denmark (skipperlabskovs), and northern Germany (Labskaus).
Unhelpfully, the equally Oxford English Dictionary avers that the origins of the word are "obscure". Either way "scouse" has become a non PC word for a Liverpudlian and remains entirely acceptable as a word for the City's scrummy stoo!
When Liverpool hit the Covid headlines a few days ago with additional restrictions etc. etc., fbb remembered that the city's buses were involved some sort of Partnership.
Followers of this blog will know -  (because fbb has yabbled on about its ineffectiveness and stupidity - yawn yawn) that the Sheffield Bus Partnership is condemned, not just by your elderly scribe, but by the Sheffield City Mayor, Dan Jarvis, no less.

He has also said, officially, that the South Yorkshire PTE is "not fit for purpose". In fbb's eyes, therefore, bus partnerships don't have a very good image. 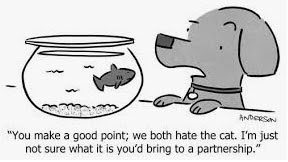 Their purpose is not always positive ... 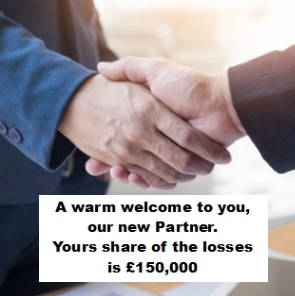 ... and certainly, in Sheffield, the whole idea was to reduce competition by reducing services - all sold (ineffectively) to the public as "improvements".
The Sheffield partnership is very dead; so how are things in Merseyside? .
The partnership is between Arriva and Stagecoach ...

... brokered by yet another collection of logos!

The Metro Mayor is Steve Rotherham ... 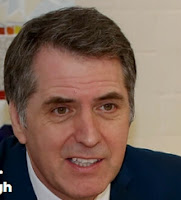 ... who writes of himself thus:-
In 2010, Steve was elected as the Member of Parliament for the Liverpool Walton constituency. During his time in Westminster he led campaigns for justice for the Hillsborough families; in support of blacklisted workers; for compensation for those suffering from mesothelioma and asbestosis; and to change the law on the use of old tyres on buses and coaches.
From 2015, Steve served as Parliamentary Private Secretary to the Leader of the Opposition, Jeremy Corbyn, before successfully seeking the nomination to be Labour’s candidate for Metro Mayor of the Liverpool City Region.
In May 2017, Steve was elected with 59% of the vote and has overseen almost a billion pounds of investment, as well as delivering half-price bus travel for apprentices and implementing the pioneering Households into Work programme.
So we should not be surprised to discover that his political heart does not beat cosily with that of the present government!
Time and time again, Westminster has found itself unable – or unwilling – to find solutions to the problems facing ordinary people’s lives. It is why I am convinced more than ever that the solutions to the biggest challenges faced by our society can be met through devolution.
His half price inbus travel scheme was very successful in that it broke the bank and the operating heart of a number of smaller bus companies. So, apart from logos ... 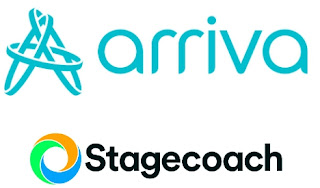 ... what do the good folk of Liverpool get for their omnibological togetherness.
Here is what Mersetravel (the PTE) has to say.
Some services on the bus network are part of a Quality Partnership between Merseytravel, the bus operators and the local councils. On these “Quality Bus Network” services, bus operators coordinate timetables to deliver a frequent turn-up and-go service. It also doesn’t matter which operator’s ticket you have, you can use it on any bus on the route.
The PTE's colours are yellow and black. But we learn, perhaps (???), from the above that the "Partnership" has been created service by service, rather than network-wide. We may also guess that those services were originally at the forefront of competition between Stagecoach and Arriva.
Merseyside PTE was formed in 1969 by the merger of Liverpool ... 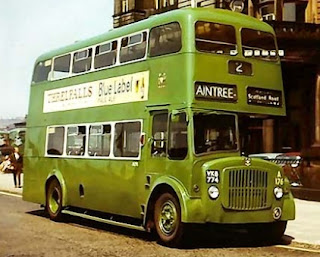 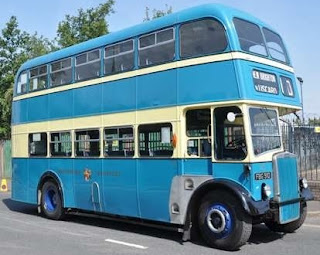 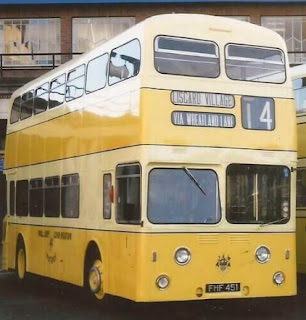 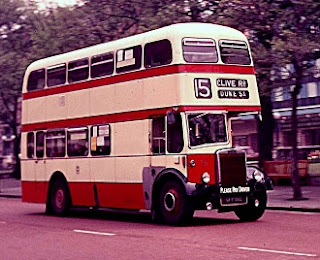 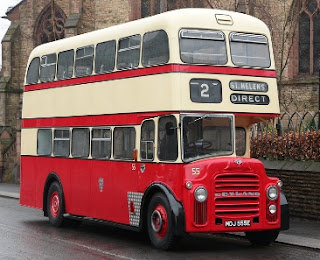 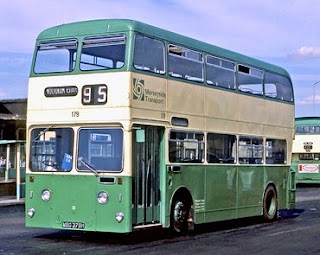 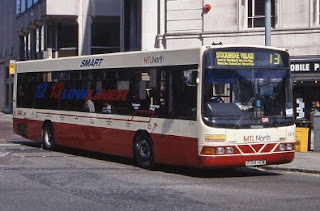 ... which went bust and was sold on to Arriva in 2000. You might well ask where Stagecoach came from. Stagecoach "got" Ribble which assaulted feebly from the north but later bought out Arriva's Gilmoss depot and Glenvale Transport. 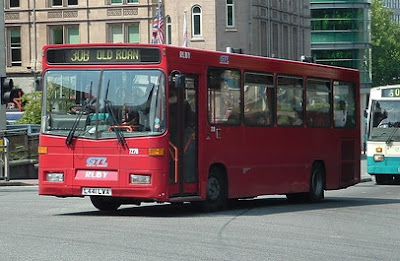 This sale of Gilmoss depot, a condition of the privatisation diktat, was protracted and fraught, but, eventually, it brought Stagecoach into competition with Arriva.
Tomorrow, fbb will look at the list of "Partnership" services.
Raconteur Reveals Riddle of Wrenn (5) 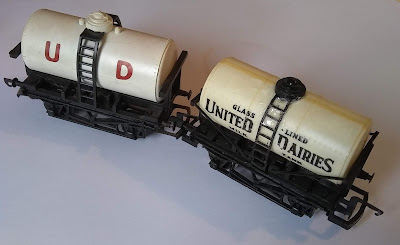 The suggestion that fbb's Wrenn tank wagon was a Triang body on an ex-Hornby Dublo chassis does not hold water, as the body would have been far too short. The UD version (above) was made from 1955 to 1975 and the upgraded version (with strapping) from 1975 to 1982 and the fully strapped version well into the 1990s.
But, it does appear that the Wrenn tank has a Hornby Dublo chassis. The original, with solid brake gear, ran from 1938 to 1965-ish. 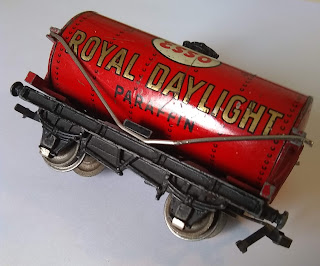 Some wagons (possibly not tank wagons - this one is a "marriage") ... 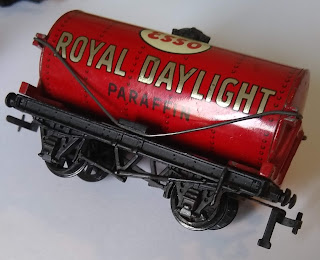 ... were sold with open brake gear, still crude as the brake blocks were not in line with the wheels! This new chassis was slightly longer (by about 3mm - fbb has measured it!) than the original and ... tada ... 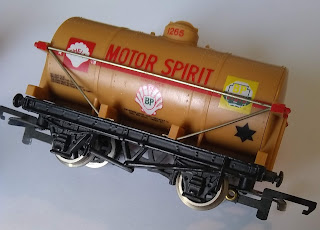 ... exactly matches that of the Wrenn wagon; but the latter has Triang couplings not the traditional Hornby Dublo style designed by Peco! Both chassis are in cast metal.
And, if you need more convincing, look at the axleboxes. Old Hornby Dublo ... 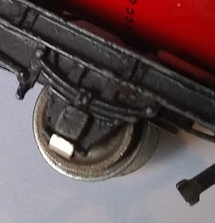 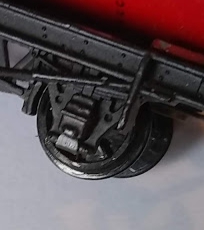 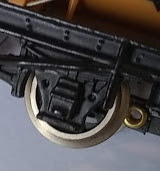