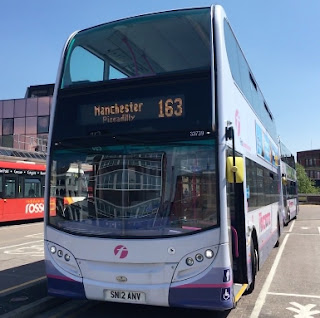 First Bus never had much of an idea about route branding in Manchester, unless you count this Bury Corporation heritage livery. 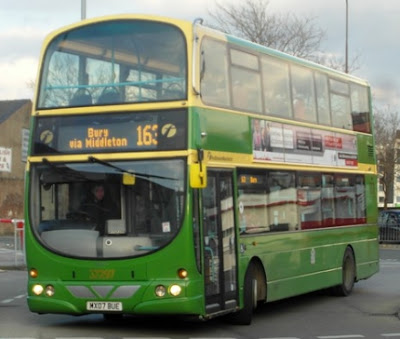 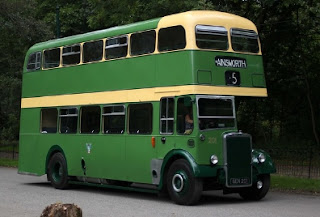 Clever computer artists suggested something simple but practical for the 163 ...

... running every 15 minutes with just over an hour's running time. 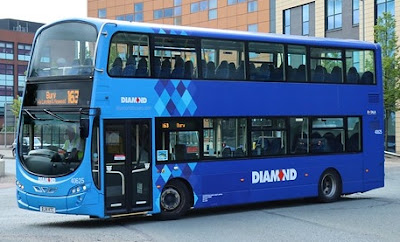 Diamond have just begun to equip the route with they smart liveried buses ... 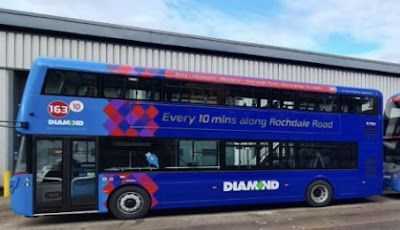 Do we guess that Diamond is upping the frequency? Or is the 15 minutes headway Covid temporary?
Will The "ember" Glow? 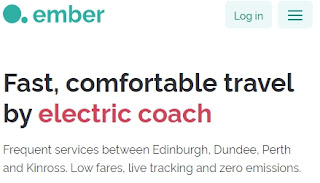 Ember (they like to write it with a lower case initial letter) is the two vehicle electric coach service between Dundee and Edinburgh. 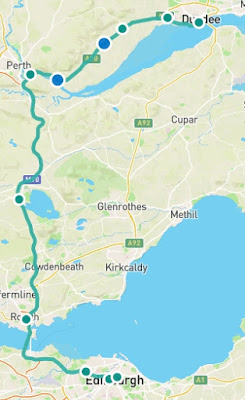 fbb reported on its start a few weeks ago, but now Roger French has bravely travelled north to give it a try. He was impressed with the quality of service, the promptness of the timekeeping and the comfy coach seats with ample leg room. 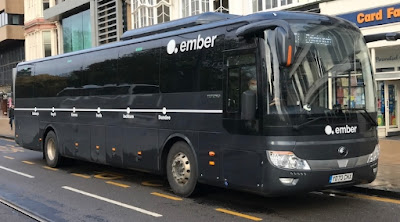 He took an evening journey from Edinburgh and an early journey back from Dundee. The coach needs one hour in Dundee to fill up its battery for the return journey to the capital and back - by which time the tank is low enough to need a further charge. Obviously this make vehicle requirement a tad on the expensive side.
The one thing that gave Roger cause for concern was that he was the only passenger on both journeys.
Hence the question provoked by this item's heading!
Roger's blog can be read (here)
If the above link does not work, here is the URL to copy.
https://busandtrainuser.com/2020/10/14/will-ember-continue-glowing/
A Slightly More Successful Coach Service
News that Stagecoach is investing in new vehicles for The Oxford Tube, now its exclusive service between guess where and London.

As Stagecoach celebrates its 40th anniversary this month, this major investment will see 34 new coaches started to be rolled out in the company’s largest ever coach order.

The investment marks a major upgrade for the Oxford Tube service, representing Stagecoach’s ongoing commitment to improving the customer experience even during the difficult circumstances of recent months. 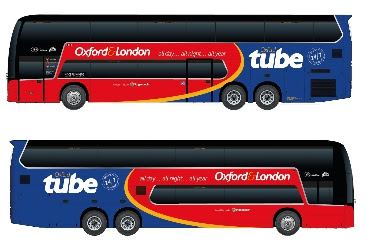 In addition, the coaches will have the leanest diesel Euro 6 engines which limit exhaust emissions.

With sustainability being key to Stagecoaches operations and values, 5 of the 34 coaches are being fitted with solar panel systems by the multi-award-winning UK company, TRAILAR. The solar panels will be fitted to provide clean solar energy to power all on-board electrical equipment, reducing the vehicles requirement to create electrical energy via the burning of diesel. 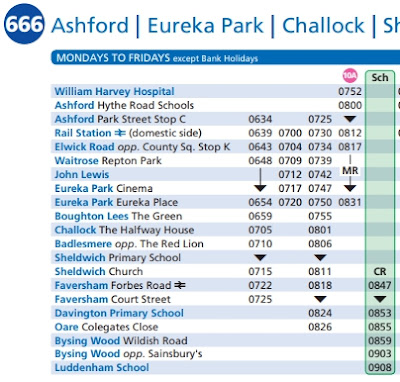 A Twitterer has posted some pictures of service 666 to Luddenham school ... 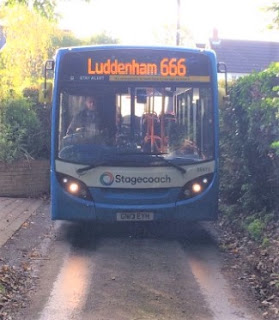 ... running, surprisingly, on Schooldays only. Where is Luddenham School? 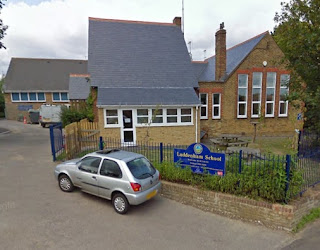 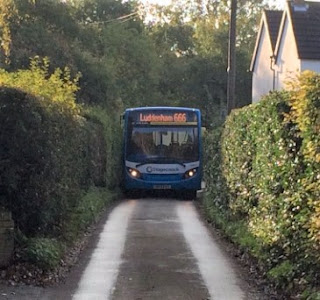 Some of the corners are, to use a technucal term "rather tight" as seen here on the "light" run back to depot. 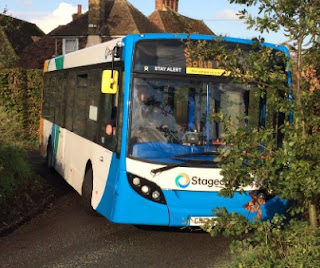 The effect of the roadside foliage on Stagecoach's new (and pathetic) livery is know in the trade (another technical term) as "Hedge Rash"!

Several chocolate peanuts to the poor bloke/blokess who gets that duty!

1960 Introduction of the excellent "Wrenn Model 152 Racing Car System", very much a competitor to "Scaletrix".(Note fairly standard mis-spelling of Scalextric)

1965 Introduction by Wrenn of other products  such as "Master Mariner Set" and "Wrenn Wonder Boat", etc. 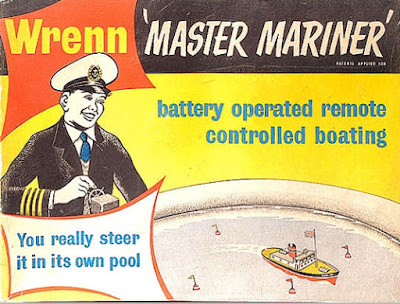 The steering mechanism used the Magnetic field induction principle, a very clever idea. The Magnetic field was created by connecting the battery across the large blue coil surrounding the pool.

Hornby Dublo collapses and is sold to Triang, but Triang products remain unchanged. In order to off-load a large stock of Dublo models and keep the brands separate ... 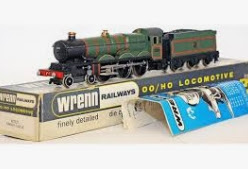 A large number of Dublo models started appearing under the Wrenn brand.

1967 Wrenn launch "N" Gauge railway product range, which were manufactured by Lima, Italy, and supplied to the UK market in Wrenn "packaging". 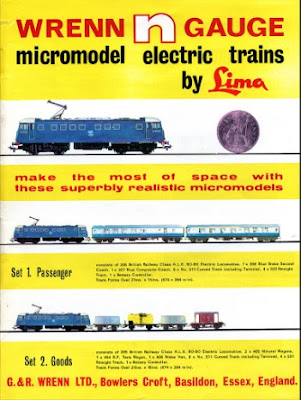 The company was beginning to "make a noise" in the Model Railway market. 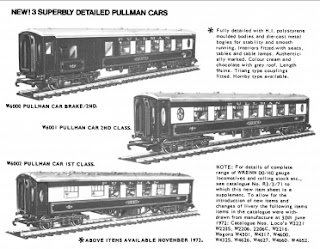 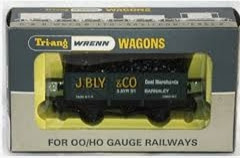 1972 Wrenn separates from Lines Brothers Group, and an increased selection of Locomotives/Pullmans/Wagons. 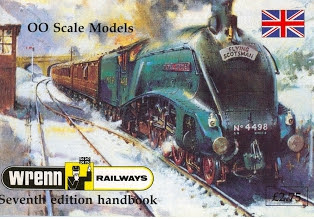 The guard with flag appeared.
But the wagons were still based on Hornby's ould molds, but with Triang couplings ... 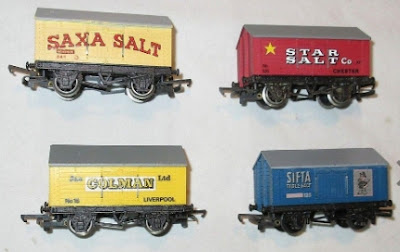 ... and in a much wider range of liveries. Hornby had an O gauge tinplate Saxa wagon in their range ... 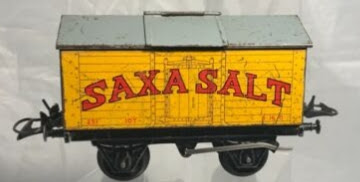 ... and as the SD6 pl;astic moulded bodies appeared for OO, the bright yellow and red wagon duly appeared. 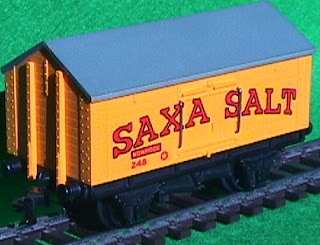 So fbb's latest acquisition, you would expect, would be a Wrenn tank wagon that used to be Hornby Dublo. Well now ... 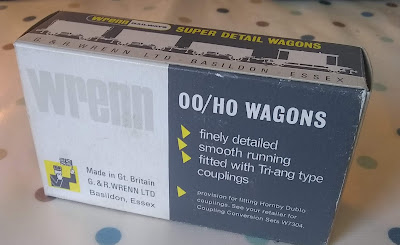 ... we shall see.
An Apology
Still fbb battles with the new "shape" of the new blogger "interface" which is harder to "ackle" than its predecessor and delivers unpredictable results. Don't shoot the blogger - he is only doing his best. Needless to say the gnomes in the official Blog-bunker do not reply to complaints.
In a NEW piece of incompetence, Blogger has arbitrarily decided to reduce the size of some text from "normal" to "small". Aaaaaargh!