The pre-announced book review is postponed until Monday "for operational reasons"! 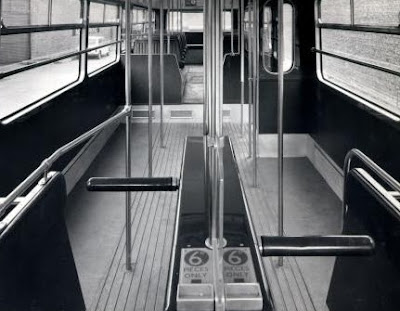 Isle of Wight Alan, who was a depot manager for London Transport. points pout that the picture above, quoted in yesterday's blog, was NOT the fare collection turnstiles of a DMS but probably a MBA. London called them Merlins, everybody else in the Galaxy called them swifts. The flat fare of 6 pence (2&frac12; of today's pence) was the fare on Red Arrows operating in central London. 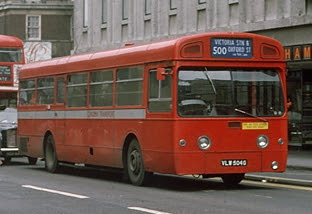 The DMS buses had one turnstile entrance flow, the other via the driver as one-man normal collecting fares as usual. 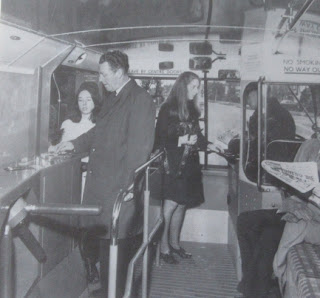 Both were unreliable, unpopular with drivers, passengers and the engineers who had to maintain them. 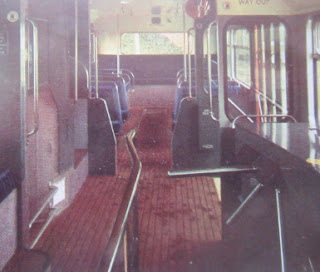 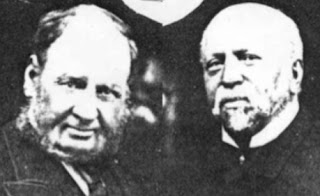 These splendid gents opened a chemists shop in The Drapery, Northampton, a road that is now more an expansion of the too-small North Gate bus station rather than a proper shopping street. 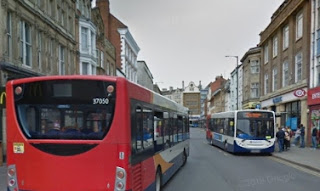 In the 19th century, the Victorian Jeyes brothers, Philadelphus and John, began their pharmacy business in The Drapery, Northampton. fbb remembers the shop, but mostly the name Philadelphus!

In addition to providing remedies, their inventive pursuit of the sanitary led to the development of the world renowned Jeyes Fluid in 1870. This wonder product received a Royal Warrant from Queen Victoria, which it still holds today. The fluid proved its worth during the First World War, cleansing and disinfecting in the most arduous of circumstances. Of course it is still an outdoor staple today, with a slightly changed formula. 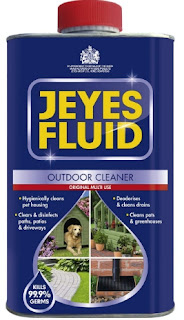 The Philadelphus Jeyes pharmacy at The Drapery continued until 1969, eventually moving to Earls Barton under the management of Philadelphus’s great grandson, David Jeyes, and his wife Georgina. 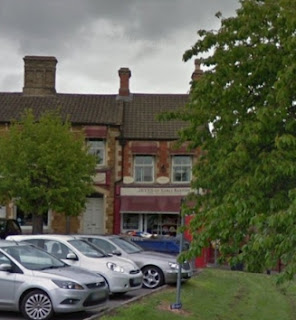 It is now a cafe and a Pharmacy Museum, situated just opposite Earls Barton's historic church c/w a Saxon tower. 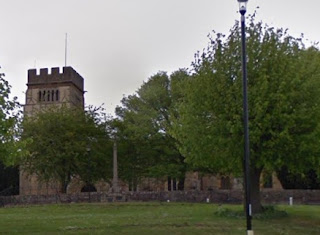 Currently, a paltry hourly bus service (X46/X47) would get you to Earls Barton Square to visit church and shop, but the effort is worthwhile on both counts. 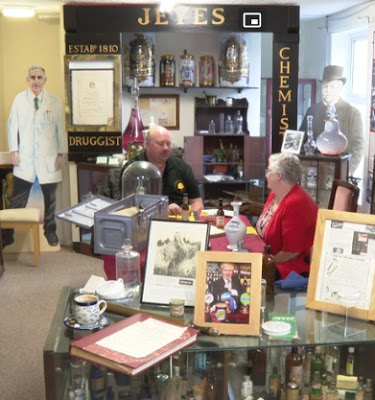 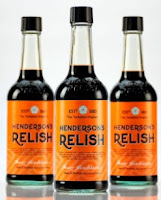 The Earls Barton Jeyes' have commissioned a re-introduction of a long-forgotten product, viz ... 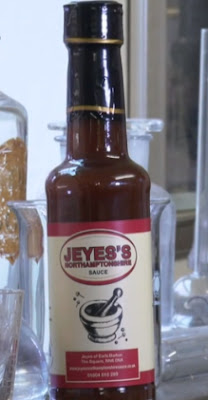 ... Northamptonshire Sauce, surely a rival for Worcestershire Sauce or even 'Endison's (shock horror). fbb is not aware of the degustatory efficacy of this product but hopes to try it in due course.

Some cruel wag asked whether the sauce was, in reality, Jeyes fluid by another name and in a different container. 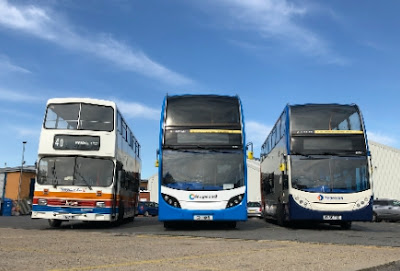 The awfulness of the latest ;livery is not apparent from the front end view above but becomes clearer in a line-up side view. 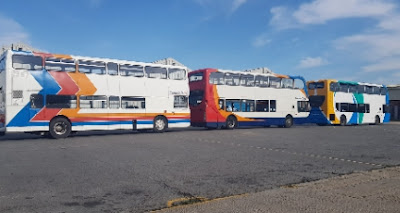 But which would you prefer on your "long distance" Stagecoach bus or coach? The weak yellow and grey ... 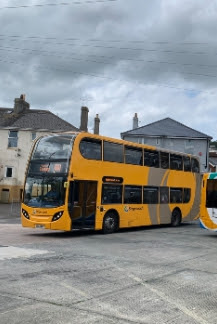 ... which looks like it belongs to a Motorway maintenance contractor - or this retro example ... 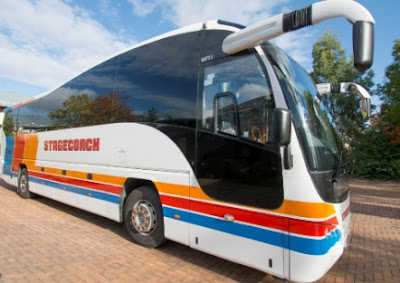 ... which still turns the eye even on a very modern coach? 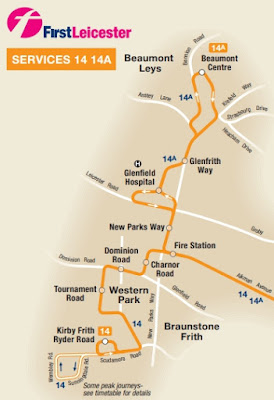 First's 14 and 14A run west of Leicester centre along Aikman Road, parallel to Groby Road. The 14 then runs south to Kirby Frith whilst the 14A turns north to the shopping centre on the Beaumont Leys estate.

For some time the standard livery for these services has been the boringly ordinary purple wedge. 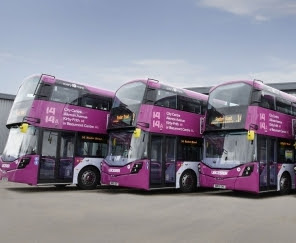 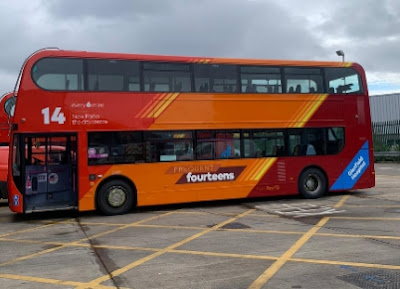 A new brand name is applied, "The Fourteens". Now where did they get that idea from? 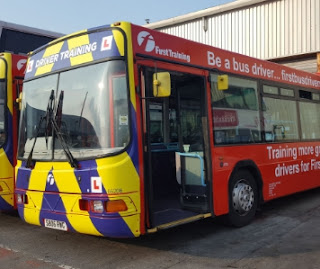 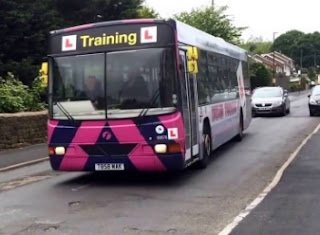 In general, so the policy goes, you paint your Training buses with a garish front and rear hoping other drivers will get out of the way. Whether this is the right approach or not is debatable, especially as motorists are not renowned for showing deference and respect to bus drivers. But Leicester has come up with something different.

"More" began as a brand for four/five frequent routes starting in Poole and, in the case of More 1 and More 2 extended through Bournemouth and beyond. Only m1 and m2 remains as a reminder of the past, because ALL Wilts and Dorset bus routes in Poole and Bournemouth became "more".
The company has always been good at publicity.
Recently published is their timetable book. 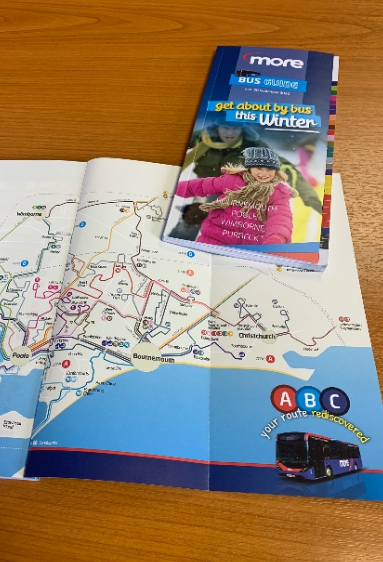 But what is going on with those A B C letters?
We shall see.
Tomorrow - A Good Read (postponed).
Another Tank Wagon Is Coming 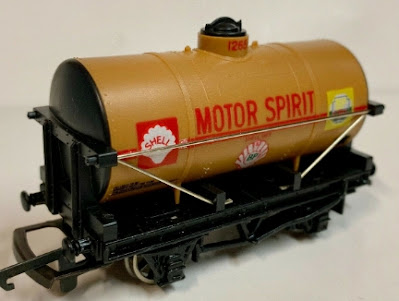 Full information will be revealed when it arrives!
Delayed Book Review blog : Monday 12th October
Posted by fatbusbloke at 02:00