This Is How It Was : An A57 Excursion 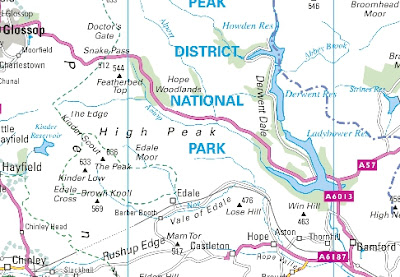 Hulleys courageous X57 is the first bus service running across the Snake Pass between Sheffield and Manchester since 1965. But buses have run via the Snake since then - until fairly recently. This was back in the days when Derbyshire, which used to be one of the top "Bus Counties"- in partnership with the Peak Park Board - was both keen and financially able to support bus based leisure and tourism throughout the year.
It is a sad reflection on the mealy mouthed governments (of any colour) which have spoken enthusiastically of reducing exhaust gases and promoting clear and car-free air whilst making it nearly impossible for local authorities to support bus services to encourage that policy.
Today's post is from 2007 and looks at the Winter schedule. Summer timings were much the same but some services ran later because daylight was more readily available.
T M Travel 473 via Snake 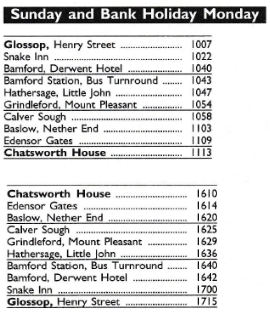 This would have been a popular duty because the bus sat at Chatsworth from 1113 to 1610, doubtless including a free pot of tea and sticky bun in the caff! 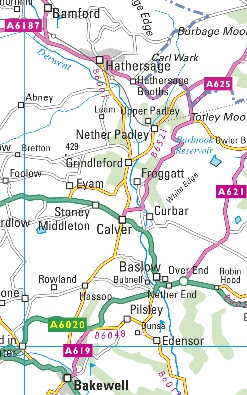 It travelled over The Snake to Ashopton Viaduct then south to Bamford (with a possible train connection) then on to Chatsworth (adjacent to Edensor on the map above).
Manchesster Glossop Castleton 373 via Snake 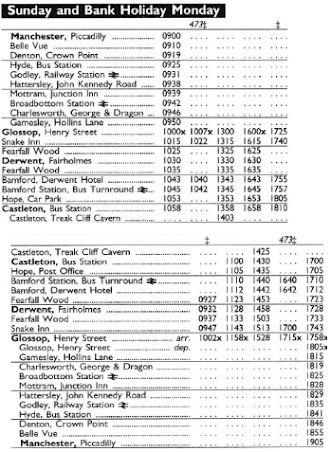 The "x" note refers to connections at Glossop with another goody, the X61 across the moors from Holmfirth. That, too was a cracker of a scenic route.
Speedwell Coaches held this contract in 2007. Note that this table also includes positioning journeys for the T M Travel bus that would run from Glossop to Chatsworth as 473. Note also that Speedwell's trips ran to and from Derwent Visitor Centre (Fairholmes) at the foot of the middle dam of the three. 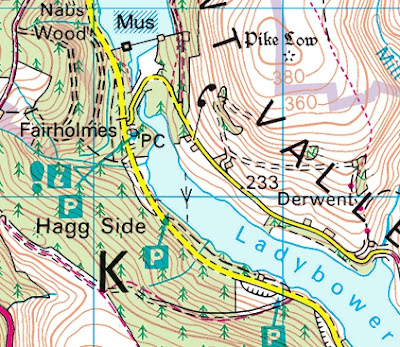 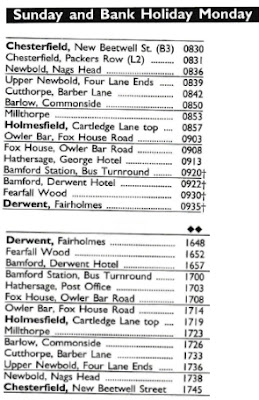 This was another T M Travel working, bringing folk from Chesterfield to Derwent. The "dagger" times on the outward leg show us that this is our old friend the 473 which works over The Snake to Glossop in order to return to Chatsworth. The "double diamond" code refers to the Winter return trip, in Summer the bus runs approx 90 minutes later.
So what happens at Fairholmes until, say 1648? Answer:-
Derwent to Kings Tree shuttle 222 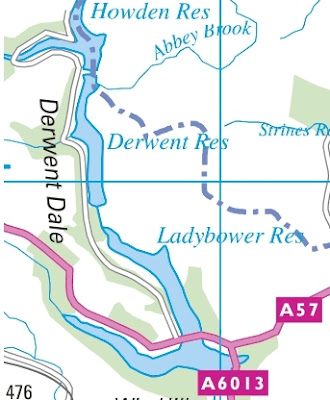 If you go to Derwent Fairholmes today you will find that you can go no further at weekends and on Bank Holidays. The road is closed as per the gate and signs. 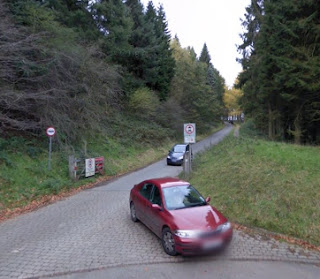 Walkers and cyclists are welcome on the 5 mile stretch to Kings Tree (where the road ends) ... 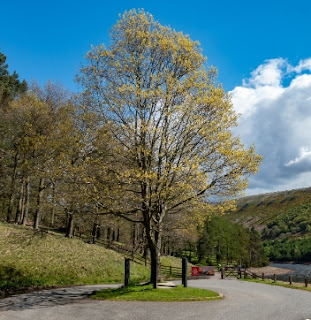 The 89A ran through the picturesque Cordwell Valleyvia Barlow as an extension of its service 89. 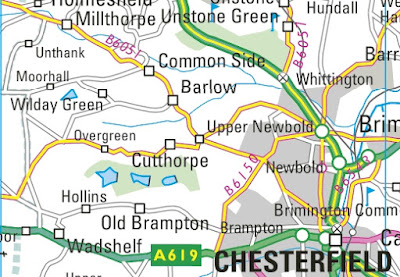 The 222 last ran at the end of the 2016 season.
The 222 minibus service has stopped running this year, reducing traffic further on the 5-mile route between Fairholmes and King's Tree. Falling numbers, year on year, of passengers using the service and increased running costs are the reasons for it being withdrawn. Last year just over 1,600 people used the minibus paying £2 each for a ticket, however the real cost of each passenger journey was £6.50, with the remaining cost being met by Severn Trent Water and the Peak District National Park. 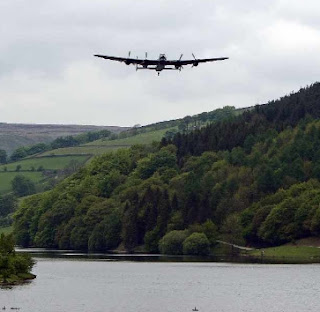 Latterly the 222 was a minibus service branded "The Dambuster Bus" in recognition of the trial flights over the dams in preparation for the WW2 "Bouncing Bomb" raids. 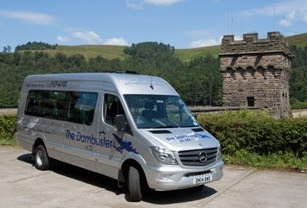 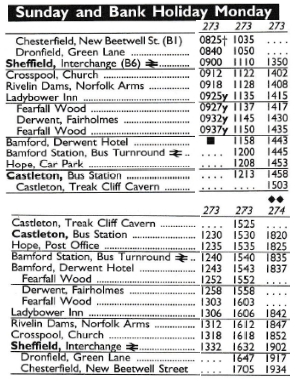 But note that the 0825 from offers a connection from communities to the south of Chesterfield (Tibsfelf, Alfreton and Clay Cross), note "y" shows the bus continues via The Snake to Glossop and the double diamond indictes that the last bus from Castleton runs via Derwent Fairholmes in the Summer.
Until the Sunday X57 arrived ... 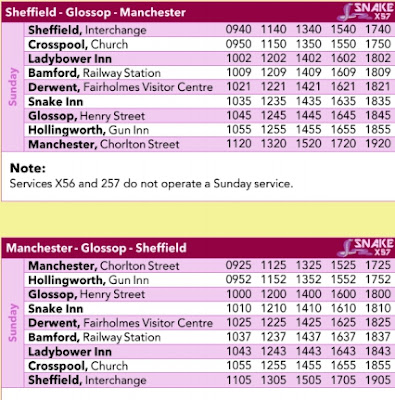 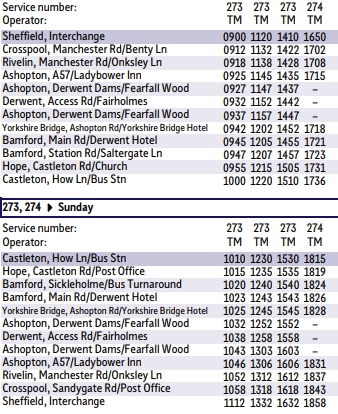 ... although with no through journeys from Chesterfield BUT with four rather than three round trips.

It is still one of the best rides from Sheffield, usually operated by double deckers for the spectacular top floor views.

It was Roger French who (a) was upbraided by a comment writer for saying that there had been no buses over the Snake for at least 50 years and (b) asked fbb if he could shed any light on the 273/373.
But it was fbb's Sheffield chum John who had all the answers. John used to work for the Derbyshire Public Transport Section and it was he who had the unenviable job of trying to present this complex network with multiple connections and interworkings as understandably as possible. He succeeded!
John kindly sent fbb some scans of the relevant timetables for which many thanks. 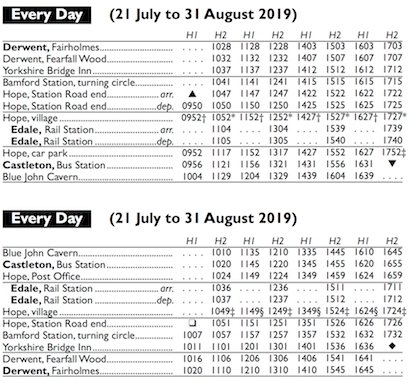 ... did not operate this year. 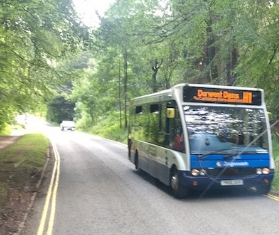 And finally: you may have spotted some 2007 journeys to Treak Cliff Cavern at Castleton. 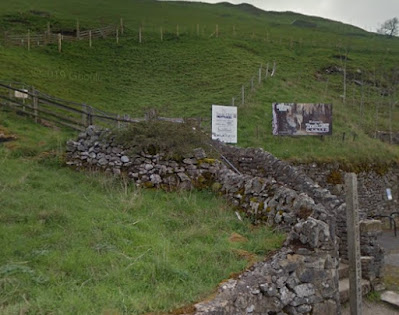 This involves a significant clamber up the hill from the old A625 which once ran beyond Castleton and over the tops to Stockport and Manchester. 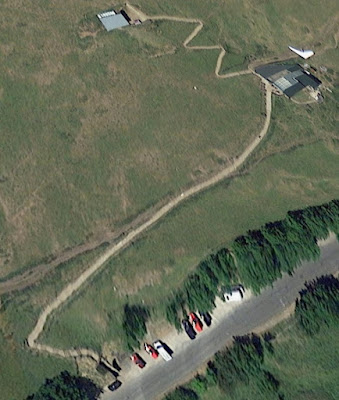 The authorities gave up their fruitless attempts to repair the carriageway after repeated landslips from the "Shivering Mountain", Mam Tor. The road is utterly closed! 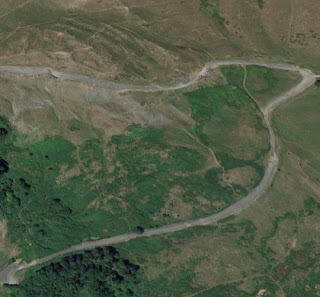 But panic not, there was (and still is) somewhere to turn a bus or coach round! 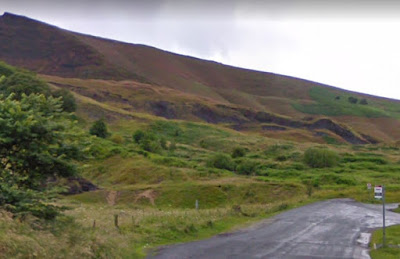 The cavern is stunning ... ... but, despite the bus stop sign, you can't get there by bus unless you want a brisk (!) walk from Castleton.

Also stunning are the prices of some of the Blue John "souvenirs". 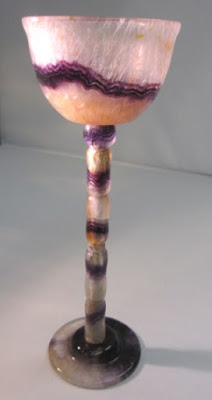 A Christmas gift for Mrs fbb?

Maybe not this year!