Another Week, Another Close-Down

The end of a local coach company was announced a few days ago. 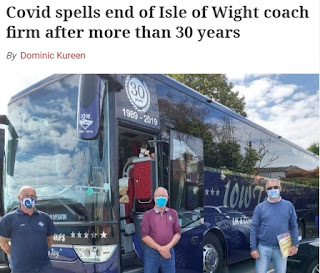 A long-standing Isle of Wight coach company yesterday (Wednesday) announced it will cease trading with immediate effect.
Isle of Wight Tours has been established for more than 30 years, taking people from the Island to areas of the UK such as Jersey and the Channel Islands, and further afield to Ireland and Europe.
Managing director, Shirley Winn, had earlier engaged in Zoom meetings with Cabinet politicians in a bid to gain assistance for the UK coach industry and keep companies such as hers afloat. 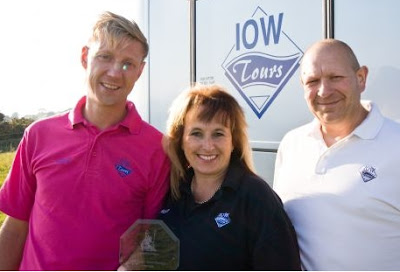 A few years ago (many?), Shirley Winn was Shirley Langridge and ran the Ryde Travel Office for Southern Vectis. IoW Tours had a very obvious office in Lake, clearly visible from the main road. 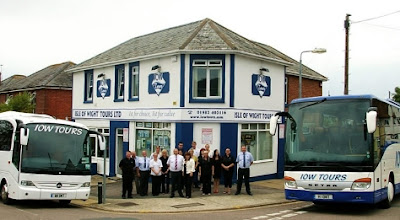 Their "current" vehicles are pictured below, courtesy of Alan (Isle of Wight hack), in the yard outside the Bus Museum. 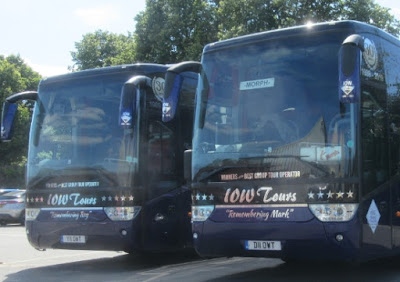 It does seem unjust that our caring Government has been happy to see coaching and Tour Operators sink without trace whilst supporting the Theatre. Yesterday came the announcement that money will be made available for that essential service, namely Christmas Pantos.
More essential that Coach Tours?
Tough question.
Fun With Maps 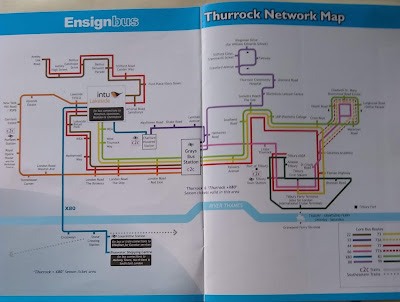 fbb has always, since being a small boy ages approx 7, enjoyed drawing maps. For a little intellectual recreation, the old man decided to create a geographically accurate (possibly!) map pf the Ensignbus Thurrock network. It is presented here in two halves corresponding with the twoi A5 pages from the current timetable book. (for a slightly larger image of the above, please click on the graphic) 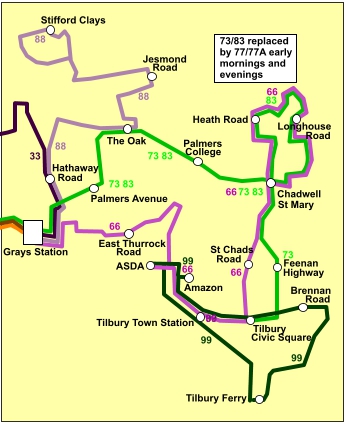 It is very much a work in progress as fbb will be adding other operators' services plus some extra geographical reference points; unserved main roads and bits of the River Thames.
These fbb creations will become important when your noble author completes his review of the Ensign bus timetable booklet.
Talking Of Ensign
The DMS bus in London achieved iconic status for all the wrong reasons. 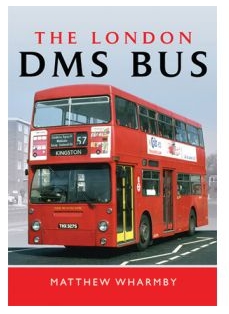 The Fleetlines proved unpopular in London, mainly due to the slow boarding times compared to those of the open-platform AEC Routemasters. To counter this, London Transport trialled the AFC (Automated Fare Collection) turnstile entry system on some of the fleet. This was coin-operated and was intended as a quicker, second boarding option as an alternative to paying the driver. However, the AFC system proved unpopular due to unreliability, and by 1979 the trial had been abandoned and the equipment removed. 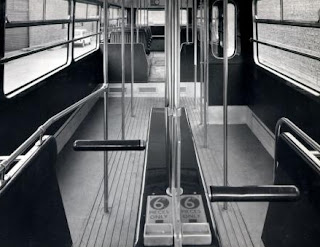 Many of the sold Fleetlines were sent to dealer Ensignbus, Purfleet. So many vehicles were despatched there between 1979 and 1983, that the yards became known as the 'DMS graveyards' as not enough buyers could be sought. 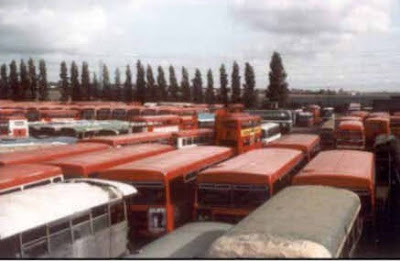 Often vehicles could not be brought out and so rotted away where they sat, however the last of these were not finally scrapped until 1990.
However, hundreds of London Fleetlines proved popular secondhand purchases for operators throughout Britain from 1979 and during the 1980s, including the aftermath of deregulation. 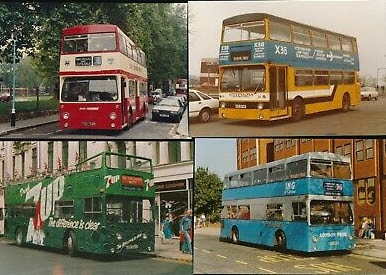 There were also a number sold for export, many going to Hong Kong. 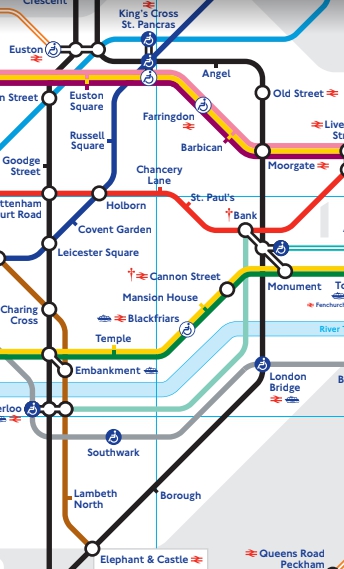 An important and frequent train service is, perversely, missing from the Underground map - obviously, because it is not run by Transport for London. But for long enough users have complained that Thameslink trains between St Pancras and London Bridge or Elephant & Castle SHOULD be included.
The dividing line between Underground and the rest of the London network is increasingly indistinct. The Elizabeth Line (a k a Crossrail) which joins two former National Rail lines WILL appear in full when it opens in 2050 (?), so why not Thameslink.
Good news! 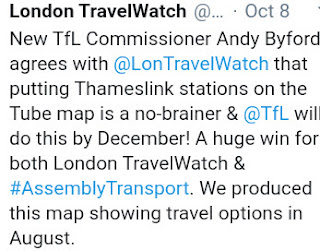 The London TravelWatch map referred to is not a huge success either! 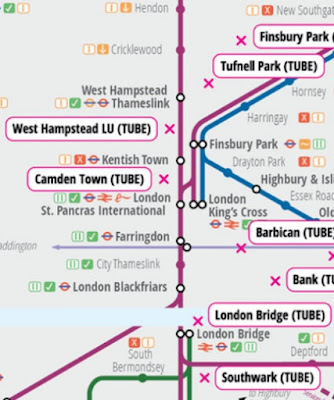 Whilst thrilled beyond measure by this news, Transport guru Roger French poses a secondary question to Andy Byford. 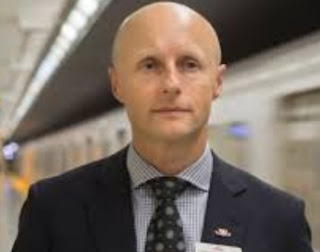 BusAndTrain User
Maybe his next ‘no brainer’ could be a bus map so people can actually see where bus routes go?
A map (or maps) in London - what a quaint idea.
Maybe Andy might use his no-brain principle to ask TfL nicely to publish their bus timetables.
Then we could know when the buses run as well as where.
Another quaint idea.
Another Quaint Idea 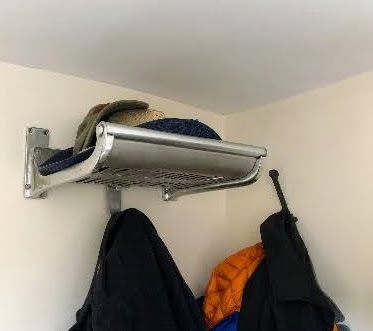 An ex Underground luggage rack, bought not unscrewed, and installed in an enthusiast's cloakroom/cupboard.
Revolution In Leeds?
News is breaking "oop noorth" of the plans for Yorkshire's independence from the UK. Together with Pikelets, Lardy Cake and 'Endisons** ... 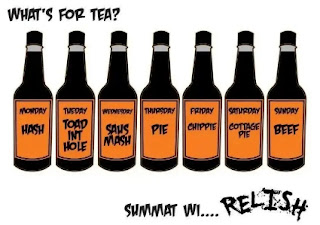 ... the provisional Government is planning to prepare for allegiance to the EU by changing to driving on the right. The first left-hand drive vehicles are on order for First Bus, as the latest "green" publicity illustrates.

There is no news yet of the border posts on the M1 south of the Tinsley Viaduct.
** Endison's (or even Endo's) is the condiment of choice in Sheffield. 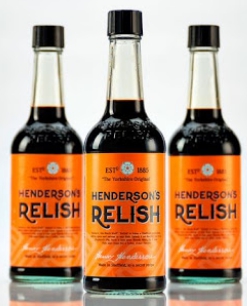