CHURCH LINK
Service starts 1030
Today's service is inside.
The fbbs will be attending. It is not possible
to set up an on-screen link before they depart.
A link can be obtained, however,
via the Church YouTube channel
(here) and clicking on the panel for today's date.
fbb is sorry he forgot to post this link last Sunday.
-o-o-o-o-o-o-o-o-o-o-o-o-o-o-o- 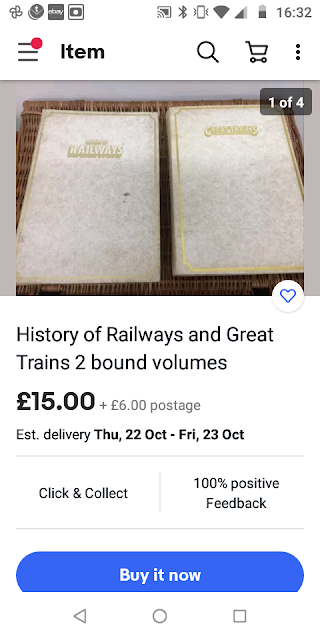 Margaret is an elderly lady who came a couple of times to the fbb's Sunday's Best Christian Meeting (Monthly with full afternoon tea!), sadly suspended for the duration. After a couple of meetings she told thwe fbbs that she could not come again and she "wasn't a believer". The fbb's stressed that she was welcome to pop in any time she felt like it.

She hasn't missed a meeting since!

Anyway, she rushed along from her flat, not far from fbb mansions, to deliver this bulky volume to fbb. 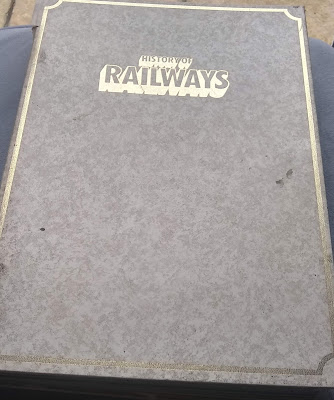 It is a "part work", big business today, whereby the subscriber received a monthly "magazine" which could be assembled in a binder top form "a book to cherish". It was, and still is, a mightily expensive way to buy a book.

Each periodical cost 25p.(approx £4 in today's money) thus the 24 sections would create a book that cost £96!

fbb guesses that the book dates from about 1972, getting on for 50 years ago and it makes fascinating reading as today's enthusiast watches how its editors saw and communicated the variety of railway history world wide.

It comes with a wall poster illustrating some of the trains holding speed records.

Here fbb should warn that the quality of paper, photographs and the reproduction thereof leaves much to be desired compared with today's excellent standards - but we can get the idea.

The part work is international, so we can enjoy German steam ... 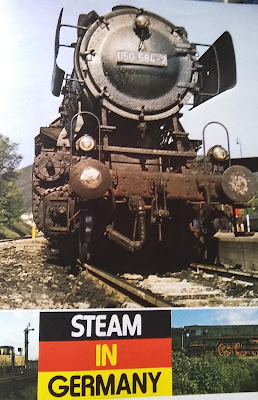 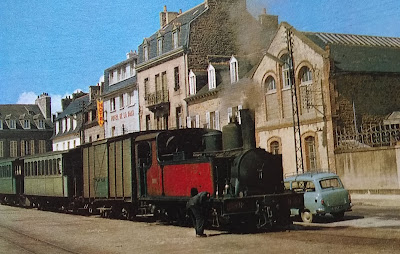 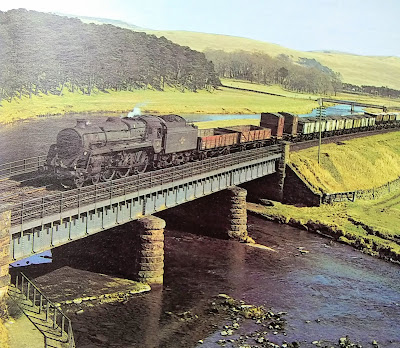 ... and, ideal for fbb's nostalgia-fest, remembering 30 years residency on the Isle of Wight. There is a train on the bridge over Newport Harbour ... now replaced by a busy road! 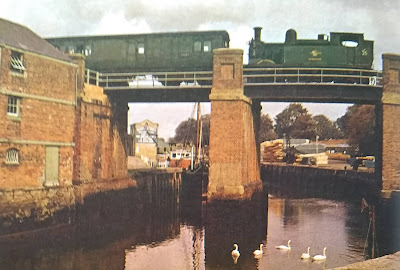 Also, boarded up and awaiting proper restoration, is IoW's Calbourne, languishing at Havenstreet. 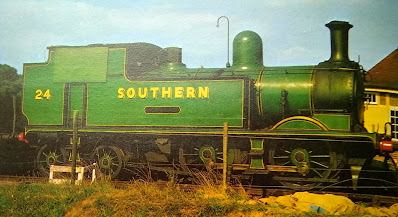 Calbourne is now in good shape! 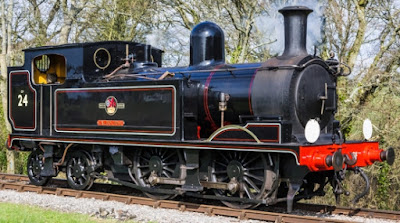 It looks as it did when a young fbb visited the Island in the late 50s and early 60s.. Delicious!

There is much more steam world-wide in this elderly part work. It may be old, but it is fascinating.

In tomorrows blog, we see the advance of new technology; firstly in the trains themselves.

Obvious But Not Obvious 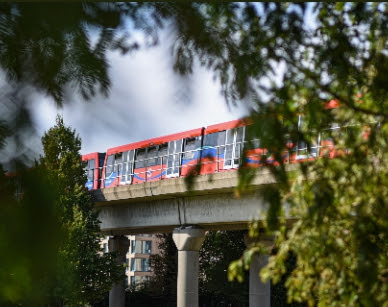 A delightdfully twittered photo of a modern railway gliding through a rural setting on its viaduct. Surprisingly it is London's Docklands railway which we do not readily associate with bucolic tranquility. 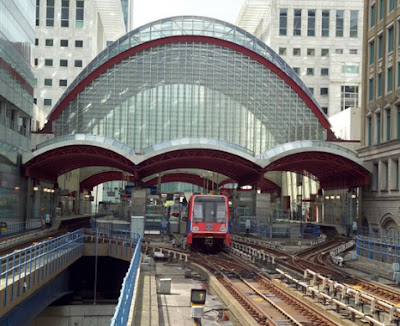 It is good to see greenery enhanced urbanism! Bring it on.

Blast From The Past 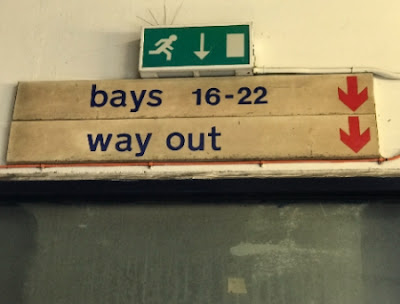 In the Stygian depths of Guildford's gloomy bus station, Roger French spotted the above sign. It leads to the least used stands, least used and least pretty, on Commercial Road, the thoroughfare that runs alongside the Friary bus station. 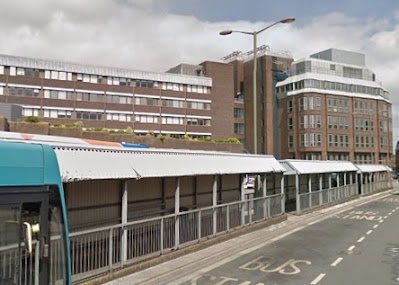 And somebody wants to re-create it all. 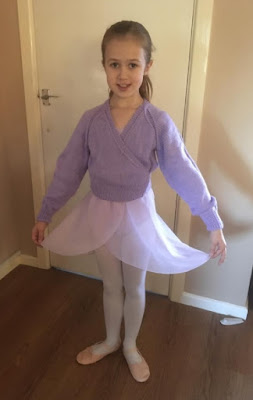 The fbb's nephew commissioned a cardy for his daughter who is "into" ballet. Apparently at different stages of learning you need a different coloured livery. It is all specified in the Ballet Corporate Identity Manual.

So measurements were sent via the dreaded interwebnet and Mrs fbb guessed a suitably balletic corporate colour. What she knat was received with great excitement and the full livery is illustrated above.

As well as looking after her devoted hubby (something of a gargantuan task) and providing scrumptious nosh, Mrs fbb knits for others and for charity. She is far better at it than fbb is at railway modelling. 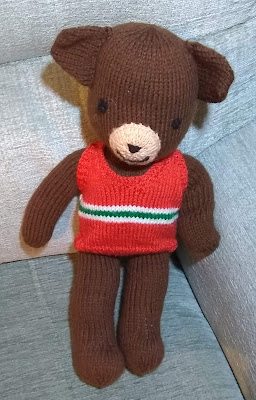 Teddies, baby hats and baby blankets go to Christian Charities supporting young families in parts of the world where heath services and maternity care are weak or non-existent.

There are resources enough to feed and clothe everyone in the world. Sadly it is unfairly distributed. 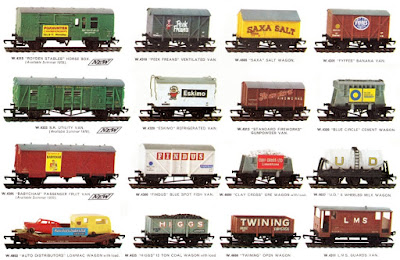 (Click on the graphic above for a larger view). We have learned that Wrenn took over the moulds and the sale of former Hornby Dublo locals and rolling stock. They gained Triang-style tension-lock couplings and many were offered in a wide range of "private owner" liveries.

fbb owned the Hornby Dublo horse box, LMS brake van and white fish van - all of which appear in the above advert in their Wren  forms. 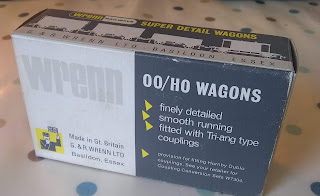 So you would expect fbb's recently purchased Wrenn tank wagon to be an ex Hornby Dublo model. The design of this wagon changed very little from its introduction in 1939. 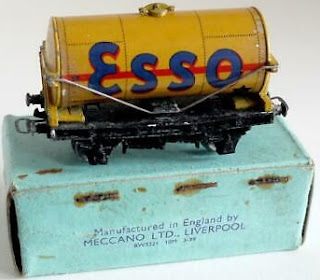 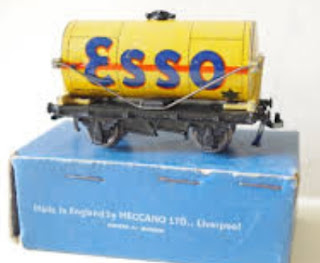 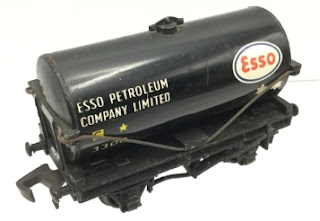 ... and, revolution of all revolutions, an "open" brake gear became part of the chassis.

So, imagine fbb's surprise when he opened the box containing his Wrenn wagon. Actually, it wasn't a complete surprise because he could fins no pictures of a traditional Hornbt tank wagon bearing the Wrenn label. 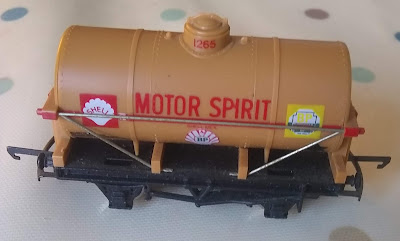 The body is plastic, not tinplate, the strapping is more extensive and fitted differently - fact it is a completely different wagon. But, in case you think fbb may have been conned ... 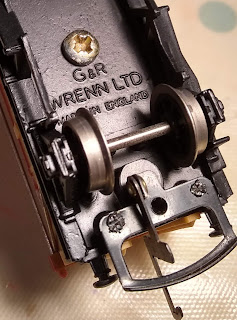 ... it definitely says "Wrenn" cast into the chassis.

Second hand versions, as we have already seen can be VERY expensive.

But if it wasn't Hornby Dublo, where did it come from?