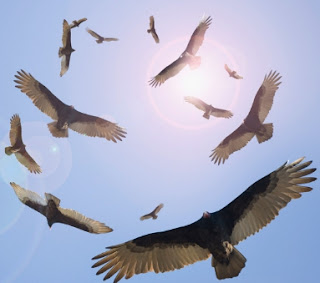 Wikipedia offers a splendid picture of "The Magnificnt Bearded Vulture" ... 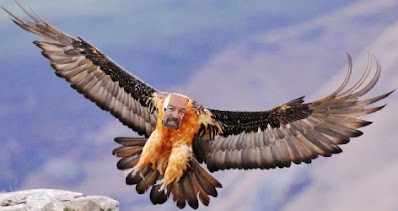 ... anticipating for the slow death of its prey, death by a thousand pecks.
Despite a few gains over the years First in North Devon began losing tenders all over the place; but the first death peck came in March 2006 when Uncle Brian the Bearded started service X55, three journeys Monday to Saturday, between Exeter and Barnstaple. 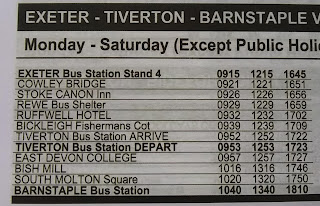 Then, in the autumn of the same year, First lost all of its tendered work, mostly to the Bearded Vulture. The incumbent was left with its "main line" commercial routes plus a few bits; surely not enough to satisfy the money leeching demands of the big cheeses in Aberdeen?
Keith Shayshutt documents this in all its gory but fascinating detail in Chapter 6; it is not a pretty sight.
But the Great Bearded Vulture still had one killer blow left. 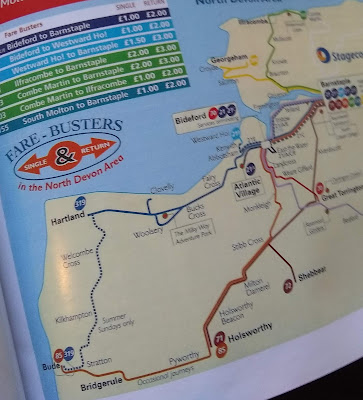 A much enhanced 155 replaced the X55 to Exeter and a new competitive 21/21A linked Barnstape, Bideford and Westward Ho! or Atlantic Village. But do not be deceived, dear\reader, it is neither a village nor does it have a view of the Atlantic.
It's a shopping centre, innit! 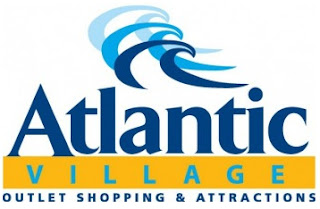 Actually it has changed its name and is now called - mysteriously ... 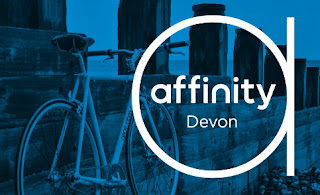 ... affinity Devon, although to what it has affinity is unclear! 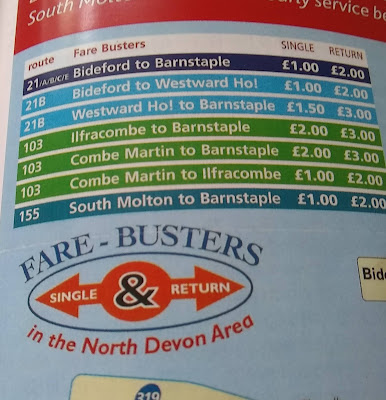 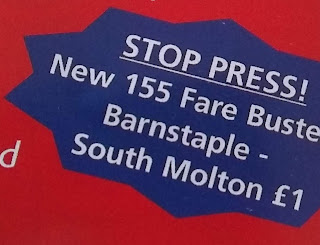 The dying beast was now in the last body-twitching stages of its life. The vulture had pecked off all the flesh and just left a pathetic carcass.
The end was both final and farcical.
First offered to sell its remaining North Devon business to Stagecoach, who agreed to buy. Then the Competition authorities announced that they would investigate the deal as it might be bad for the customer.
Stagecoach walked away from the deal, First closed down and ... 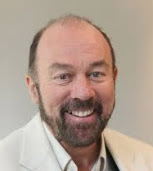 ... the Bearded Vulture got the whole lot** for nothing.
So Keith's book ends with ... 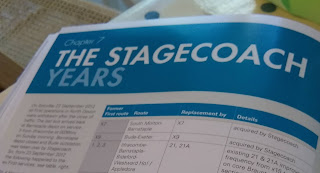 ** Not quite the whole lot because Filers are back with some Devon tendered routes, leaving the main network to Stagecoach. 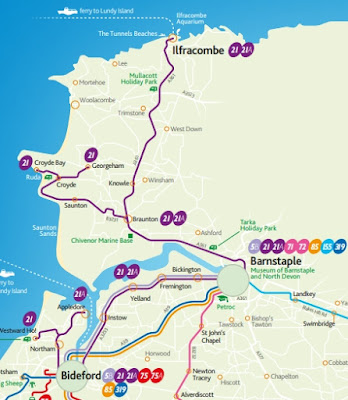 The "main line" has been tidied and rationalised into a useful stable service ... 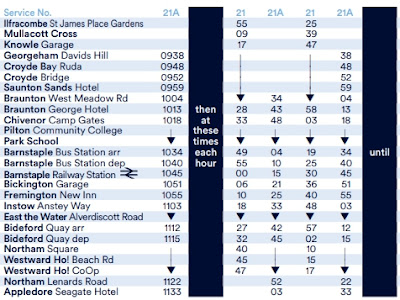 ... whilst the 155 currently runs two hourly all the way to Exeter and hourly to South Molton. 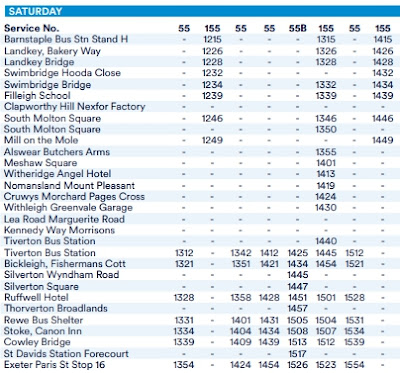 Mill on the Mole? 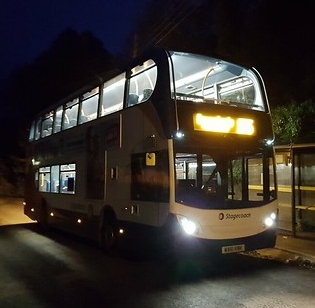 Again, do not expect to hear the soporific creak of the mill wheel as it turns slowly but firmly to grind some heritage or artisan (but very expensive) flour.
It is, in fact, what used to be called a static caravan park ...

... but the 'vans are now so immovable that they are called "park homes". There doesn't appear to be a mill any more, but, yippee, there is a sewage works. 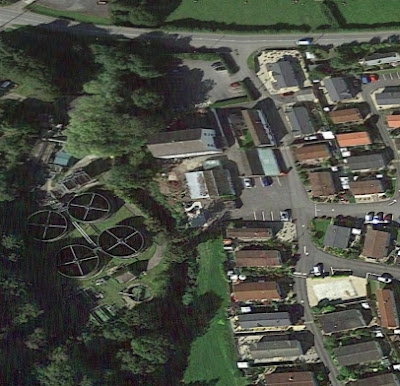 Atlantic Village (a k a Affinity Devon) now has a half hourly link to Bideford only and beyond via Great Torrington - but no longer through to Barsntaple. 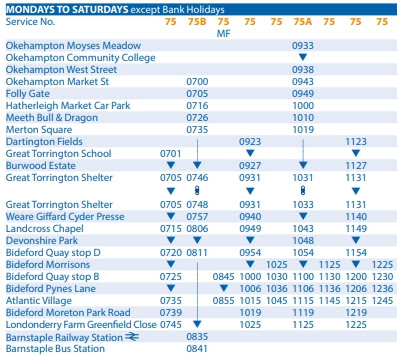 It is a slightly complicated timetable, but the map helps. 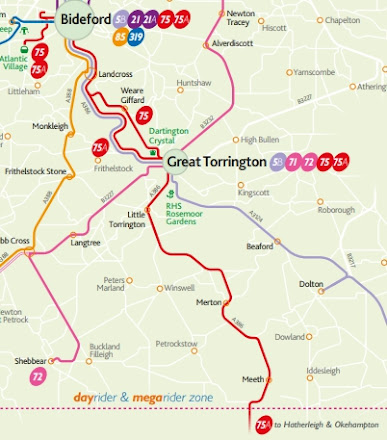 Filers are back on some of their old territory, operating mainly in the Ilfracombe area ... 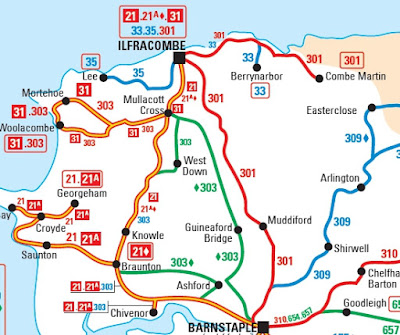 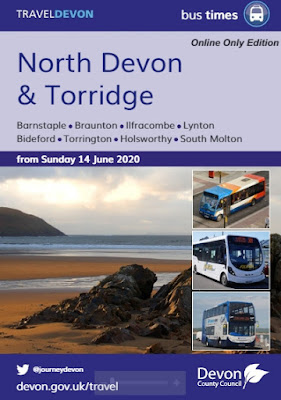 Devon Council have, sadly but understandably, decided not to PRINT their annual timetables for 2020 which usually come out in May. Let's hope this does not provide an excuse for abandoning paper production altogether.
Keith's book retails at £21.50 and is so packed with information on the challenging times of the British bus industry over the last couple of generations that you could hardly begrudge the price. The author certainly knows his stuff. 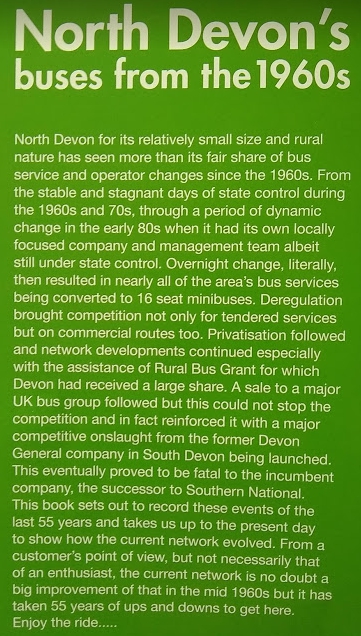 When fbb last looked, copies were available from the Great South American River, post free if you subscribe to Prime.
If fbb had not received a kind and generous review copy from the author, he would definitely have bought a copy. Sorry Keith, that's £21.50 you've lost.
Next Thinking About Thurrock blog : Thursday 15th Oct
Posted by fatbusbloke at 02:00