And, Talking of Airports (2) 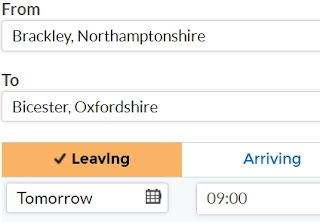 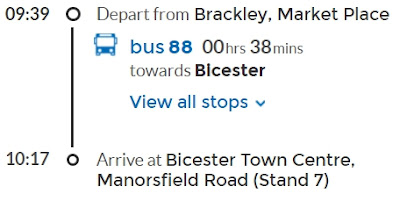 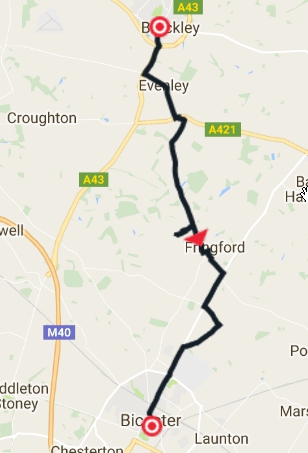 ... tells us to use service 88, run, incidentally by Stagecoach. But there is a snag. Stagecoach (they of the web site you are looking at) withdrew the service 88 between Brackley and Bicester after business on Saturday 16th July; almost one week ago.

You can find that out easily ... 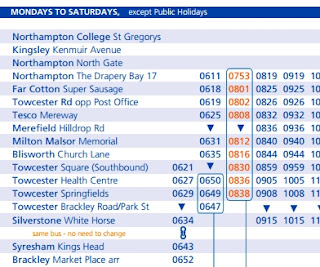 ... by downloading the timetable from the self-same Stagecoach site.

There are now no buses between Brackley and Bicester. There are hardly any between Silverstone and Bicester. You can make the journey, if you are brave and wealthy. But it takes a little more than 38 minutes of the withdrawn 88. 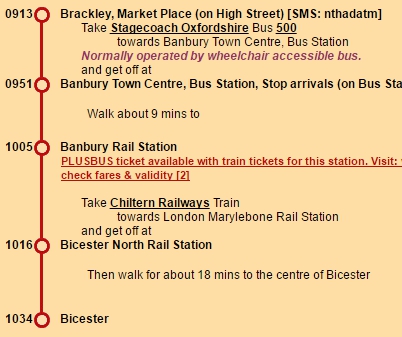 Question 1 : what is the point of Stagecoach's web site? Question 2 : who authorised the vast sums of expenditures on making something so utterly useless?

But Now : Off to Glasgow Airport.
It should have a rail link; when the airport moved from Renfrew ... 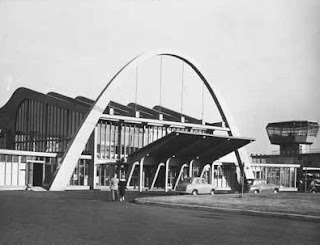 ... in 1966, long term planning should have included a rail line. But the huge growth of domestic and cheaper international flights was not foreseen. So no rail link when it could have been built simply and, if not cheaply, certainly less expensively. Eventually, and with the usual argy-bargy, a link line was planned as a short spur of the line to Gourock. 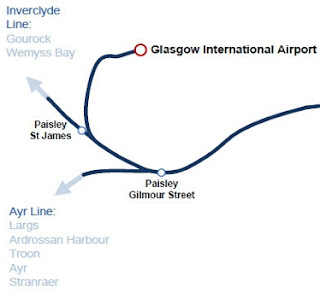 It would have travelled on viaduct from the existing embankment just short of Paisley St James and terminated in a rather splendid-looking station that would form part of an extension to the terminal building. 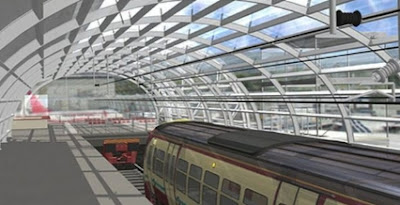 The idea is now, seven years later, back on the agenda with a proposed opening date of 2027! The current favoured option is tram-train along railway alignment as before, but (presumably) then following street running instead of a costly viaduct.

Unofficial suggestions have included a monorail, surely the most expensive option of all! 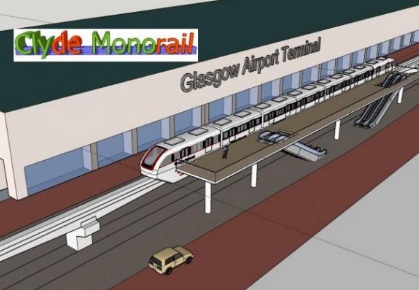 So, sadly, until 2027 we are left with a coack link from central Glasgow.

Back in the good old days of the Great Britain Bus Timetable, this was a Citylink service 500. 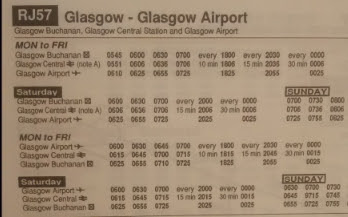 Fairline Coaches (of Glasgow) entered the fray with a competitive service but eventually succumbed and joined forces with the incumbent, even adopting the same brand, for a joint service. 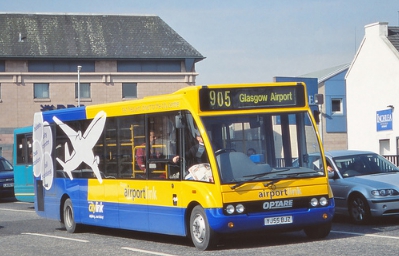 In a restructuring move, the route was contracted to First Bus who are the incumbent operator today. 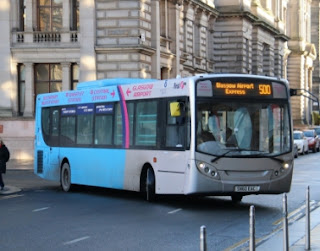 But go on-line to the Travel Scotland site and they still think Citylink is running! Isn't the internet such a wonderful service? 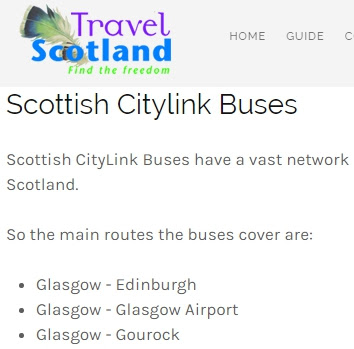 But what promulgated this blog was the news that First have just upgraded their rolling stock and (of course) their image. Clearly, more passengers will use the service now the buses are painted purple; the old pale blue and grey is so passé, darling. 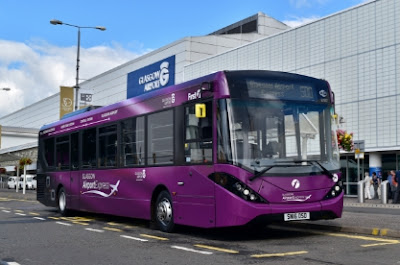 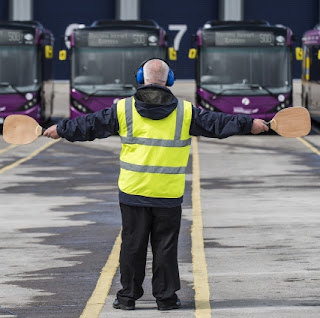 That's a bit passé in itself because real airport folk don't use tennis bats any more, certainly not at huge civil airports. But the publicity is impressive and eye catching as are the buses. 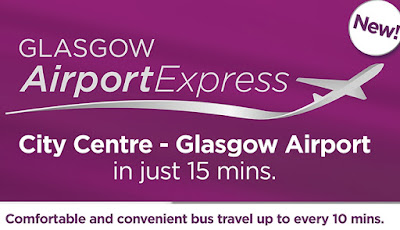 One might just quibble with the "new" blob (top left) as the service is very similar indeed to that provided 15 years ago. Unfortunately First Glasgow's Monday to Friday PDF timetable declined to materialise so we will have to make do with a chunk of Traveline's version. 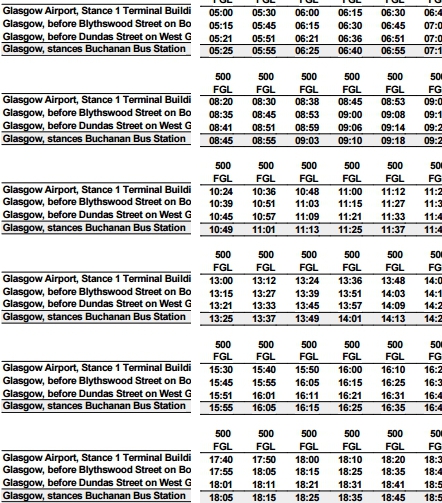 What about going from Glasgow to the Airport by train to Paisley and changing to bus? You would change to McGills route 757. 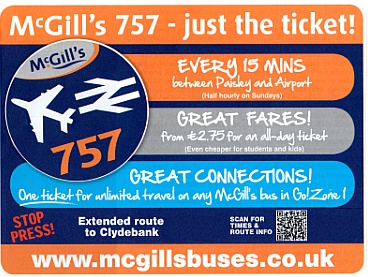 It sounds grand but, effectively, it is a local bus between Paisley and Clydebank that happens to run via the airport. 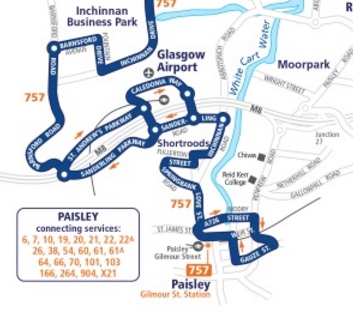 Whilst the link is useful for Paisley locals and for passengers arriving from the Clyde Coast, the direct coach, service 500, is the ideal way to get from the City centre. There's even a good, clear map to show you where to get on. 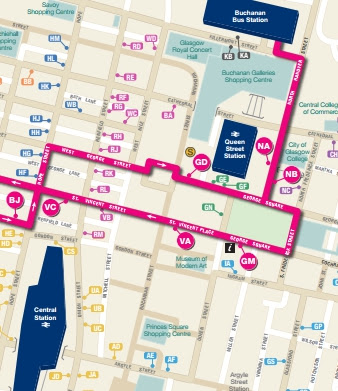 A good service now upgraded for the delectation of the flyer and airport worker; or, if you are fbb, just for a quick ride and an explore of the Terminal facilities. It is on the list for the fbb's Scottish holiday in August.


Next numbers blog : Saturday 30th July
Posted by fatbusbloke at 02:00