And, Talking of Airports [1]

A New Service Missed by fbb

He knew it was coming; but failed to spot its arrival and it has been running since 2nd July.

The Oxford Bus Company (part of the GoAhead group) has operated buses to Gatport Airwick and Heathrow for many a long year. Heathrow runs "up to every 20 minutes" on peak flight dates. 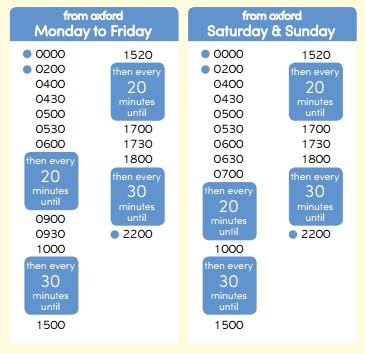 The service to Gatwick is just every hour.

The company regularly updates style and branding, and this is the latest. 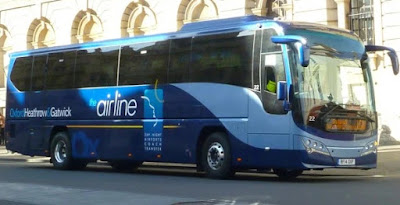 Standing at Oxford's one-time vast Gloucester Green bus station (now but a shadow of its former self!) watching coaches arrive and leave from the airports and from London is a heartening sight. They always seem busy, day or night. There is ferocious competition between Oxford Bus and Stagecoach (The Oxford Tube)  on the London run with both companies providing coaches every 10 to 15 minutes. 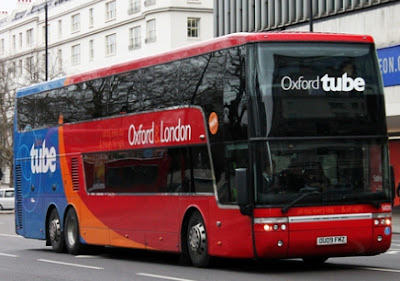 But the newcomer is a little more prosaic; but nevertheless adventurous from the business point of view.

So your better-late-than-never blogger decided to take an on-line look at the new service.

It runs approximately every two hours.(click to enlarge the timetable panel) 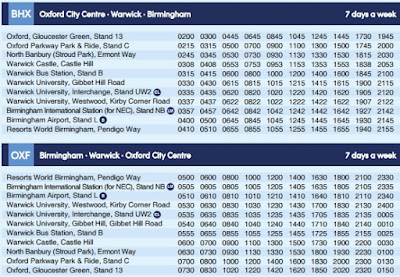 There is a feeling that such a low frequency is not attractive to air travellers who already have too much hanging around before and after their flights. But it is a start, and the service offers much more than a link to the airport.

Let's look more closely at the route and stopping places. 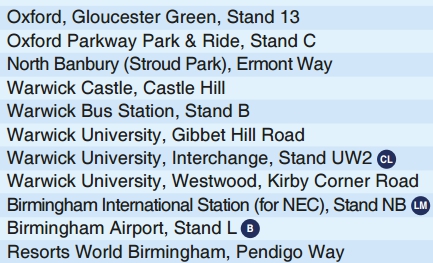 First call is at Oxford Parkway station, followed by a whizz up the M40 to Banbuty. Except it isn't the real Banbury where you might ride a cock hoss to the cross; the coach just hops off the motorway at Junction 11 ... 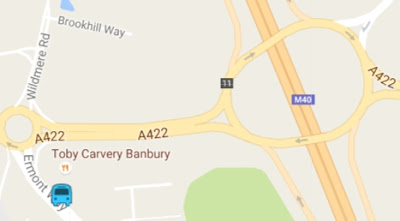 ... and deposits you at an uninviting and unsheltered stop on an industrial estate type place. At least you can pop into Frankie and Benny's while you wait for your onward transport! 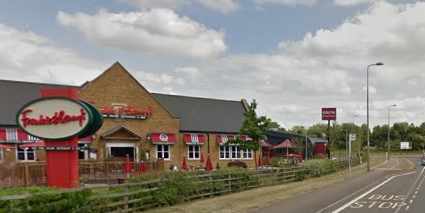 Next into Warwick, attractive for the tourist market with stops on Castle Hill ... 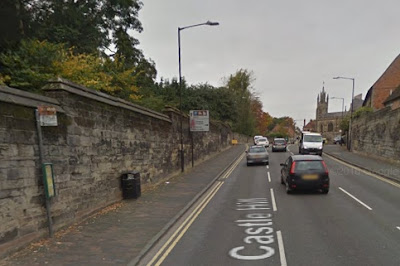 ... with equally lavish passenger facilities; and on to the town's bus station.

This is best described as basic, but, at least, it has shelters and easy interchange with local buses. 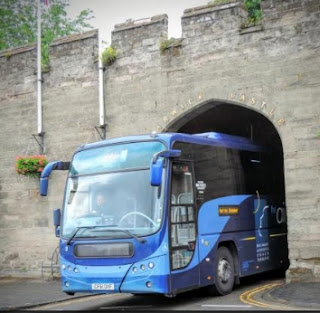 PR Picture: Does it really go there?

And so it is onward to Warwick University (which, as its name suggests, is in Coventry) where three stops are made. Gibbet Hill Road serves some of the Medical Department ... 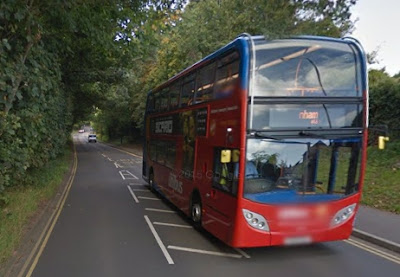 ... where Streetview caught a Stagecoach Unibus. There's Kirby Corner Road with more chunks of academe hidden in the afforestation. 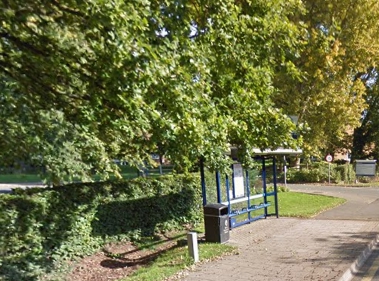 But the main Uni stop is "The Interchange", where it all happens! 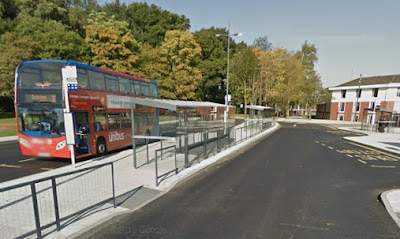 But not much was happening when the noddy car paid its photographic visit.

And so on to International Station and the Airport, which Oxford Bus, perhaps rather naughtily, calls "Birmingham". The web site does, however, stress that connections are available from here to the real Birmingham, some distance and some time away. 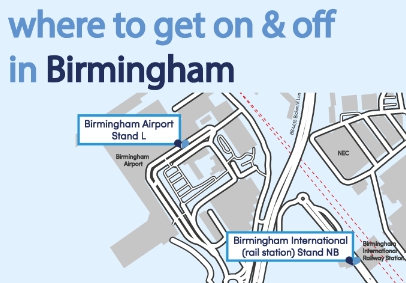 One other "Birmingham" stop intrigued your inquisitive author.

Somehow the hectic exhaust fumes atmosphere  of the Airport and the National Exhibition Centre don't quite exude an attraction that might be defined as a "Resorts World". Whatever it is, it's big. 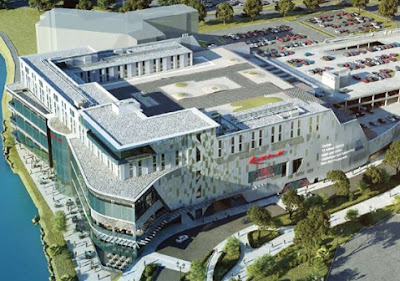 Located on the NEC site, Resorts World Birmingham is one of the most exciting retail & leisure developments to arrive here in the UK. It joins a family of Resorts World destinations located across Asia and the USA.

That puts fbb off already!

From socialising with family & friends during a visit to a show to networking with colleagues & clients after an exhibition or event, Resorts World Birmingham offers something for everyone - all under one roof: 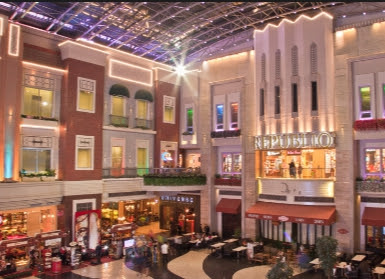 Ooh look. It's a plastic shopping street with a tin roof.

Bars & Restaurants - from the buzzing diversity of the World Bar to the gourmet delights of the Sky Bar. 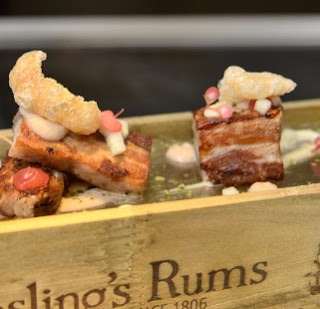 No. fbb has no idea what it is.

International Casino - a world of entertainment showcasing live international gaming from poker to baccarat, open to all players. 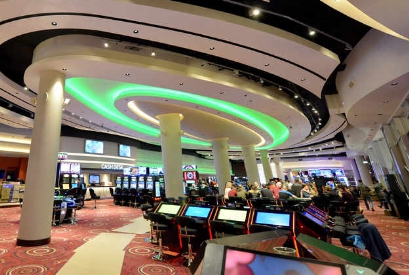 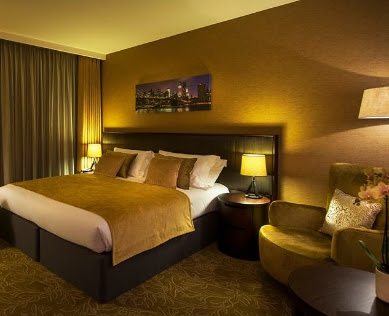 Yep. Pile on the Poyfilla!

Nightlife - As the sun sets, our nightlife awakens.

... to get back on the bus and escape as far away as possible. Must be getting old?

Thanks to our Northampton correspondent, Alan, for reminding fbb of the new Airline route. Did he e-mail before or after the awakening nightlife?

P.S. At Seaton we have awakening nightlife EVERY night 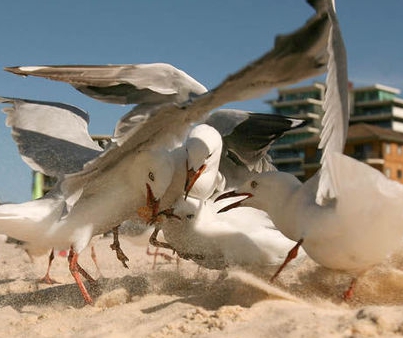 Next airports blog : Friday 29th July
Posted by fatbusbloke at 02:00