We'll take that as Red : from Midland to Diamond 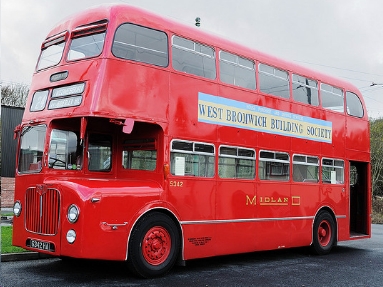 fbb never attempted to teach his grandmother to suck eggs; indeed he never sucked an egg himself. But the idea of encapsulating the history and character of the Birmingham and Midland Motor Omnibus Company in a few well-chosen blog phrases is, frankly, insulting to that iconic and much-loved company. It built its own buses, it served vast swathes of the Midlands from Gloucester to Loughbrough and from Shrewsbury to Northampton, and, until the inexorable decline of the late 50s and early 60s it served its communities well.

Then came "MAP", a desperate and not entirely successful attempt to manage decline by restructuring (cutting back!) local networks and, in the case of Midland Red, adopting local brand names. With memorable names like "Lancer", "Hotspur" and "Chaserider" came the delights of "Reddibus".

The logo as applied to the vehicles was most definitely not tasteful. 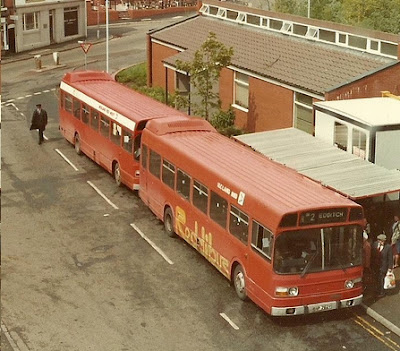 ... but it was a valiant attempt to encourage ridership and develop a local loyalty.

Privatisation did nothing to slow the decline and, renamed as Midland Red West ... 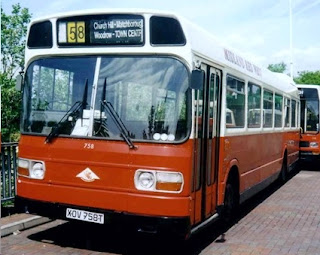 So, in 2002, in steps Pete's Travel to run some Redditch local routes.

Pete's Travel became Peoples' Express and was subsequently swallowed up by the ever expanding Diamond Bus, itself a development of The Birmingham Coach Company. Next, GoAhead bought Diamond Bus to form a springboard for development of a West Midlands business. Despite management by the dynamic Philip Kirk at Oxford, the springboard did not twang; it went clunk; and GoAhead sold Diamond at a loss to Rotala.

Bus Companies never learn, do they. Whilst the "bottom line" pressures from "on high" to pull out of unprofitable routes are entirely understandable, the Pete's Travels of this world take on evening and weekend tendered work. Then they look for the opportunity to make real money with normal daytime routes and, inevitably, "have a go" at the incumbent operator.

It is by this convoluted process that First (successors to Midland Red) becomes a minority operator (by route) on the Redditch town network leaving Diamond (successors to Pete's Travel) as an equal if not superior presence. 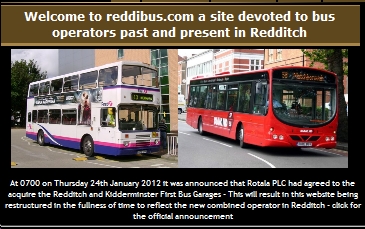 Redditch's two main bus operators are set to merge after a £1.5 million buyout. Rotala Plc, which operates the Diamond service in the town, confirmed it had purchased the First depot as well as the depot in Kidderminster. The company has also taken over 36 vehicles and the equipment previously owned by First Group Plc and, said in a statement to the London Stock Exchange, current services would continue to run as normal.

Around 120 members of staff are employed across Redditch and Kidderminster, which made an overall loss of £0.27 million in the year up to June 30, 2012. "The acquisition will enable the company to expand and consolidate its position in those areas of Worcestershire which are contiguous to its main areas of operation in the Birmingham conurbation," the statement said. "By integrating these acquired depots into its current depot network, the company will be able to take advantage of operating efficiencies generated by the acquisition." 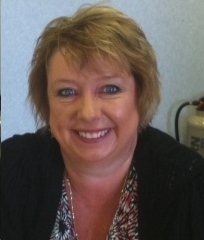 Welcoming the announcement, MP Karen Lumley said: "We need a proper bus service for the people of Redditch and I look forward to working closely with them to get that." 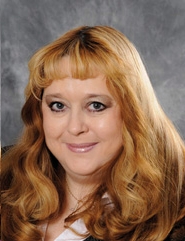 Councillor Juliet Brunner, whose ward includes parts of the 57 and 58 bus route, added: "This has got to be positive for the town and I understand the drivers are also being transferred over so that is good news too. The 57 and 58 services will hopefully run a lot more smoothly under just one operator."

And will the competition authorities throw a wobbly? Watch this space!

After a gargantuan intellectual effort and another piece of stunning cartography, the rotund one is in a position to explain to his fascinated readers exactly who runs what in Redditch. Sadly (gladly?) this will have to wait until next week as "Strange Happenings" in Bristol continue over the weekend; and involve a man with red trousers. 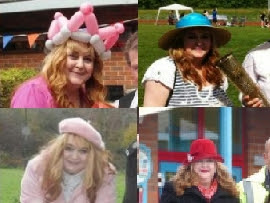 Next Bus Blog : Saturday 2nd February
Posted by fatbusbloke at 02:00