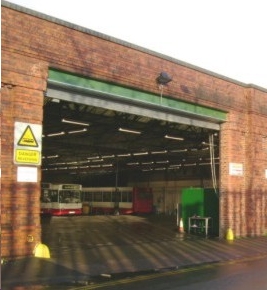 The history of Redditch bus garage was fairly simple under the auspices of Midland Red who built it in the early 1930s. Under the initial enthusiasms of privatisation, First opened an overflow parking area on Plymouth Road which eventually became their only depot, the original being "sold for development". Then Pete's Travel (aka Peoples' Express) leased it as a base for their expansion in the town. Pete closed his depot and it was then re-opened by Diamond Bus sometime after they absorbed Pete.

But where is it? 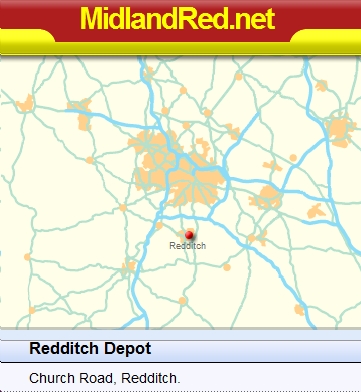 So, after a few pokings at a confuser keyboard we discover the authoritative MidlandRed.net with a record of all the company's depots.

So far, so good; and now to find it on-line. And here, lo and behold, is Google Map's Church Road Redditch ... 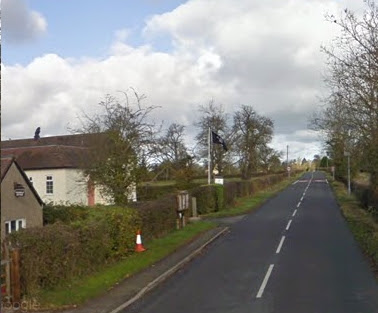 ... on a country road well to the south of the town. A leisurely drive along the lane, courtesy of StreetView, revealed no sign of  bus garage; nor any clues (i.e. a new housing or industrial site) where it might have been.

Google Maps suggested that there was a Church Lane in Redditch; but that was equally rural and unproductive. Yet some "authorities" did refer yo the depot as being on a "Church Lane". So it was back to old technology as fbb perused his Philips street map of Worcestershire. 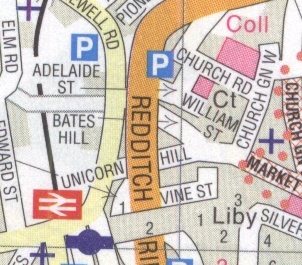 And, lo and behold (again?), right in the centre of the town, not far from the bus and ail stations, is another Church Road. But fbb's map book is old(ish) so perhaps this Church Road has succumbed to yet more redevelopment and is now a huge Costa Lot coffee emporium? Is Google Maps more up-to-date?

But Google thinks it's called Church Lane. That would be another Church Lane, not the "country" one as indexed. 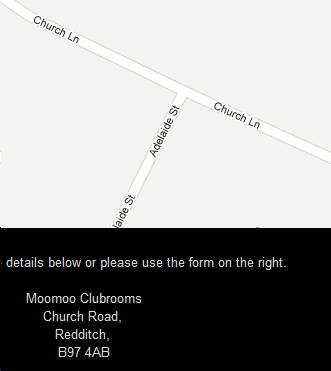 ... with their map showing Church Lane but their address given as Church Road. fbb must remember to pop in for an evening's sweaty deafness sometime; NOT. And the road sign, partly obliterated by Google ... 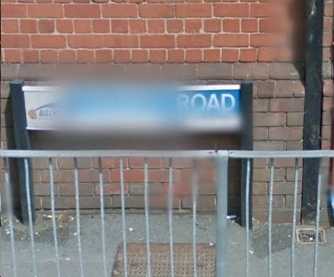 ... definitely votes for Church Road. Eventually, by choosing another Redditch centre road and looking (with eyes, not computer) fbb was able to direct his Streeview to Adelaide Street and, Eureka!, there was the old, nay the present, Redditch bus depot at the end of the street! 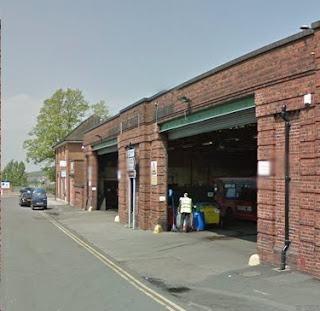 And, unless it has been redeveloped since the Streetview noddy car trundled past, there it still is; the present Diamond bus Redditch depot.

Moral : don't believe everything you read in the internet!

And while we are in an investigative fame of mind, where is "Imagination Street", terminus of Diamond's route 70A? 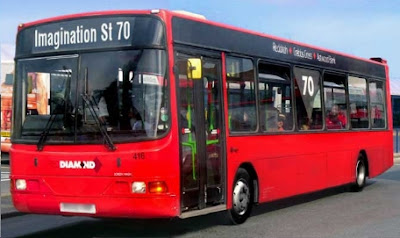 It is not indexed in fbb's street map book ... 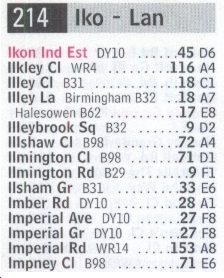 ... nor is it a little Worcestershire hamlet, complete with trendy gastro-pub and expensive barn conversions.

Diamonds's route 70 runs direct via the Evesham Road, south to the settlement of Astwood Bank and the "Imagination Street" journeys are a variant of this service. This time the interwebnet was slightly more helpful.

When fbb's three boys were younger, it fell to their less fat father to rush home (exhausted) from teaching to "organise the birthday party games". Essentials were things like Musical Statues and the concluding highlight, Pass-the-Parcel. Then the little horrors children went home blissfully happy and fbb swallowed a fistful of tranquilisers and sat gibbering in his armchair for the rest of the evening. But now that would not be acceptable.

Now we need to take our offspring to ... 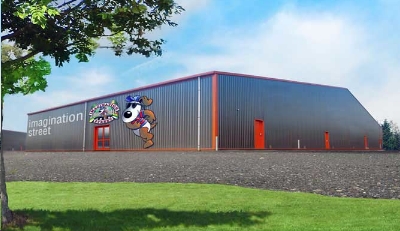 ... a huge shed on an industrial estate and pay much fine gold for the little ones to risk life and limb by scrambling over terrifying stuff whilst screaming at a decibel level that often reaches ear-drum bursting volumes. High-priced "fast food" is part of the deal; yummy yuimmy. 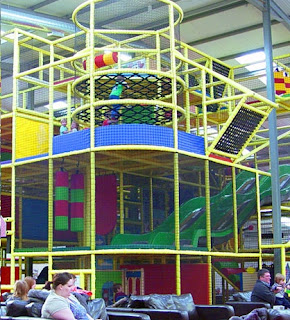 And that, my blog-reading chums, is "Imagination Street", situated in the middle of nowhere ... 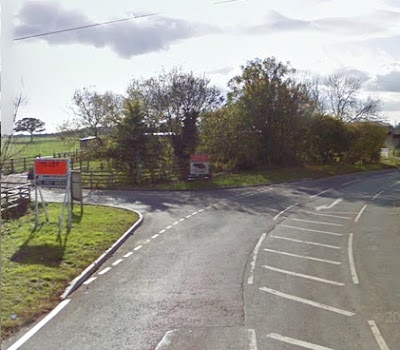 ... down a long drive off a lane in farming country a mile or so beyond Astwood Bank.

So now we know! Presumably the owners of this "play shed" are paying some subsidy to Diamond to run out there once an hour?

N§ means "not schooldays" and § means "schooldays only."

You wonder how long the service will last.

Next Bus Blog : Thursday 7th February
Posted by fatbusbloke at 02:00