In Gilbert and Sullivan's operetta "The Mikado", this piece is performed by Ko-Ko ... 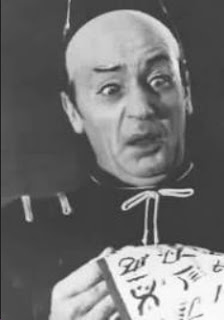 ... Lord High Executioner of the town of Titipu, and the male chorus. The words of this song are often rewritten for any given performance, and local references are sometimes inserted. This version was sent in by a "whiste blower" from Travel South Yorkshire in response to the rumour that fbb was on the list of invitees to a prestigious event in Sheffield this coming Friday.

He's written very often, "Sheffield leaflets - bad!",
Speaking out he can't resist--but fat bloke's on the list!
Director David Brown mayn't be completely glad
With clenching of the fist--but fat bloke's on the list!
He's the so-and-so who's blogging, with deprecat'ry tone,
'Bout leaflets they put out, and all the maps except his own;
And the posters of the departures put up at all round the place
He's said it all so often, "PTE's a huge disgrace."
They'd like to shut him up and force him to desist
They don't think that he'd be missed;
They're sure he'd not he missed!

He's had a go at First Bus, its onetime tatty fleet
Their web site he has dissed--but fat bloke's on the list!
And moaned about the livery that seems pale and incomplete
With venom he has hissed--but fat bloke's on the list!
Stagecoach buses terminating; there at Banner Cross
They don't but SYPTE cannot give a toss!
120 going to "Fulwood" which isn't where it ends
He has annoying habits of upsetting even friends..
SYPTE directors are said to be right pi--- annoyed
They don't think that he'd be missed;
They're sure he'd not he missed!

The names they give to bus stops, and the awful traveline
His criticisms persist--but fat bloke's on the list!
He rides on Sheffield's buses so that he can have a whine
A blogging masochist--but fat bloke's on the list!
He's had a go at "spider" maps and found them quite a laugh
He seeks out web site errors and rants and raves, not half!
He used to live in Sheffield and thinks he knows his stuff
The high-up angry bosses are quite sure they've had enough.
He's met the great Director, and had a slap upon the wrist,
They don't think that he'd be missed;
They're sure he'd not he missed!


fbb has been known to write an occasional blog expressing some minor concerns about publicity for bus services in Sheffield. Yet the rumour is true! 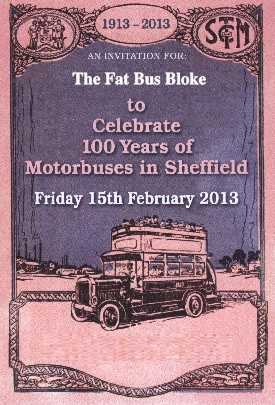 Your bulky blogger is indeed invited to the above event as the personally printed invitation card indicates**.

Inside the two-fold card there is a message from First's Director of Buses UK:- 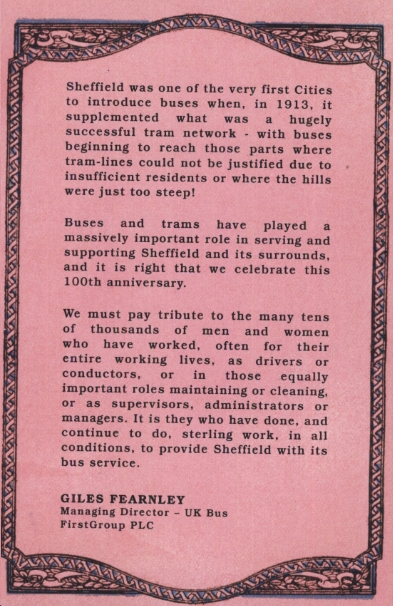 Then comes a schedule of the day's events:- 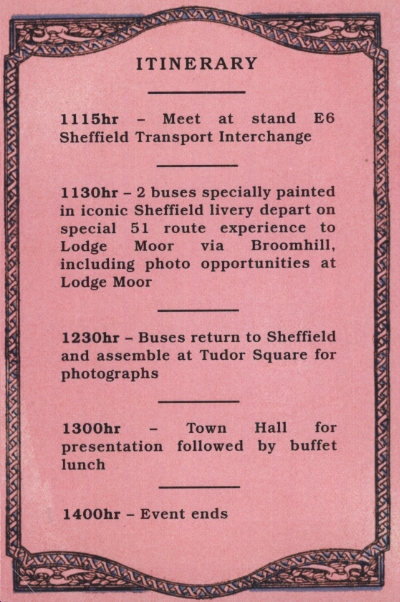 And on the back, a facsimile timetable leaflet cover in the style created by Giles Fearnley's grandfather, Arthur Robinson Fearnley. 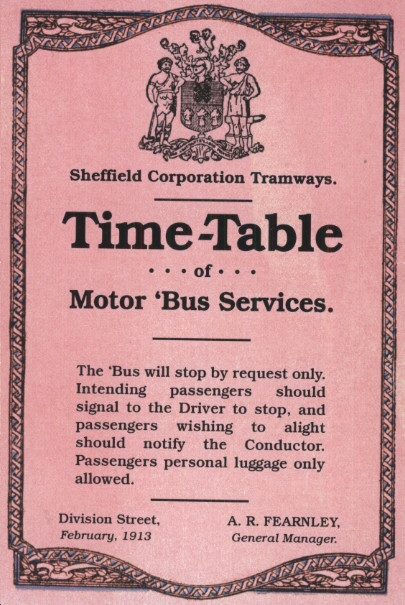 Rumour has it that the two buses referred to in the invitation will be jaw-dropping in their magnificence and a credit to all the staff at First Bus in South Yorkshire and to many other enthusiasts who have contributed information. So for the rest of this week fbb will focus on the event and its background, ending with a live, real time blog from Sheffield on Friday.

There is no doubt that this "do" will be a credit to First Bus and an indication of a deep seated change of heart from an attitude that was only ever interested in making the appropriate percentage of profit on every possible activity.

** In fact the fat bus bloke was invited under his real name and real identity; and, in all seriousness, the chubby one thanks First Bus from the depths of his blogging heart for the huge, huge privilege that they have graciously granted him!

And he promises to be nice all week.

P.S. The Gilbert and Sullivan original is perfomed below. Watchable if your band is broad!

P.S. The following article appeared in the on-line edition of "The Star", Sheffield's evening rag, on Friday 8th February. It has been slightly (?) edited by the fat bus bloke!

Celebrations are taking place to mark a major milestone in the history of Sheffield’s transport system. This month is 100 years since the first buses began running, on a route between Broomhill and Lodge Moor,  which launched on February 15, 1913.

First, South Yorkshire’s biggest bus operator, has events planned for the occasion. The company is painting two modern buses in the former liveries of Sheffield Corporation, the organisation that ran buses in Sheffield for most of the last century. The buses, one in 1913 livery and one in 1960 livery, will soon be running on the 51, the modern-day route from the city centre, through Broomhill to Lodge Moor.

Giles Fearnley, managing director of First UK Bus and "born & bred" in Sheffield, has a personal interest in the centenary celebrations. His grandfather, Arthur Robinson Fearnley, was the general manager for The Sheffield Corporation Tramways from 1904 to 1936.  And Giles, along with local transport historians and enthusiasts across South Yorkshire, has helped organise the centenary celebrations.

He said: “It is very exciting that people in Sheffield are coming together to celebrate 100 years of motorbuses in Sheffield. It is only right and proper that we organise a series of events to commemorate this anniversary and the public should look out for these spectacular buses that represent the history of this great city.”

The original buses supplemented Sheffield’s tram network; but the old trams were phased out half a century later and buses became king of the road for local transport. Trams only made a return in 1994.

The centenary will be marked by a commemorative trip on the 51 service by dignitaries including Lord Mayor, Coun John Campbell and the world famous bus blog writer, The Fat Bus Bloke. It will all happen later this week on Friday. On return to the city centre, there will be a reception at Sheffield Town Hall.