My bus, my bus; my kingdom for a bus! 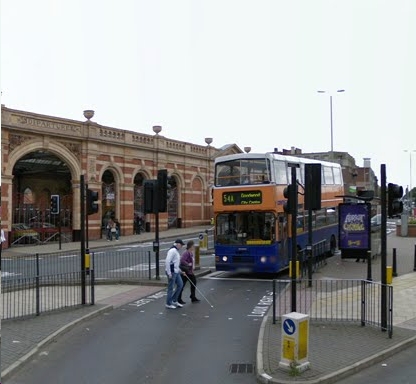 fbb has arrived at Leicester station and is seeking a bus to get his tired and aching limbs (and, hopefully, the rest of him) across Leicester centre to St Margarets bus station for his onward journey to Groby. See "St Pancras to St Margaret [2]" (read again). The PlusBus poster tells him to go to stop RS4 and catch any one of these.

But there is no stop RS4!


A while back, in "Buses" magazine, a man called Rose (surname rather than given!) from FWT** wrote an impassioned article extolling the virtues of his cunning plan to re-label all the bus stops in Leicester centre. fbb is not sure whether this project extended to the Station; but if it did, no-one has told Plus Bus.

The stop in question is lettered "EG" (and not RS4) but did appear to be appopriate for the five services on the PlusBus poster. And almost immediately an articulated green service 80 arrived ... 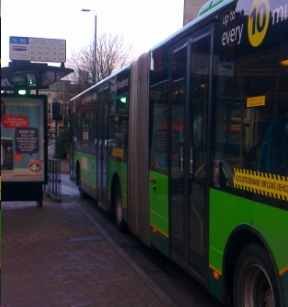 ... fbb boarded and was unceremoniously turfed off with a "we only go the Charles Street" from the driver.

What now? Trembling with fear, fbb tried to examine the huge frame of detailed information at the stop. 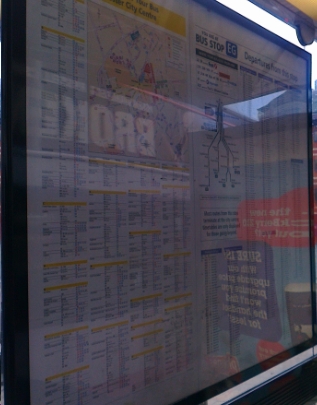 But the print was so small, the frame set so high and fbb had foolishly forgotten his stilts; meaning that reading any detail was impossible. Reflections from outside the shelter made it even worse. But there was one of those dreaded spider maps:- 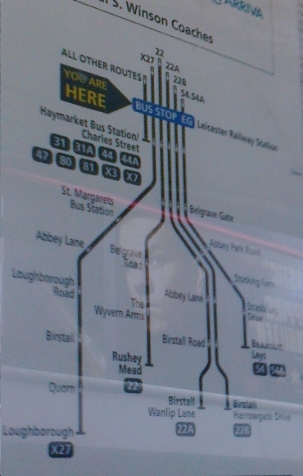 Unlike Plus Bus's offering, his showed the previously identified routes (47, 80, 81, X3 and X7) as running to Charles Street and not to St Margarets.

Only the X27 was shown as serving St Margarets on its way to Loughborough. So fbb decided to wait for an X27. With no timetables displayed at all, and not even a departure list, what else could be done?

An innocent fbb might well have now given up and set off to walk. Everything seemed to contrive to obfuscate and  befuddle. Certainly the people who installed these misleading (and just plain wrong) notices have not the faintest idea how utterly useless their efforts have been. What is the use of putting up lots of detailed lists with no readable guide as to how frequent the services are?

Rather than walking, fbb decided to stop being innocent and go back to relying on his knowledge. Services 47 and 48 run every 15 minutes between St Margarets bus station and South Wigston, a suburb to the south of the City. 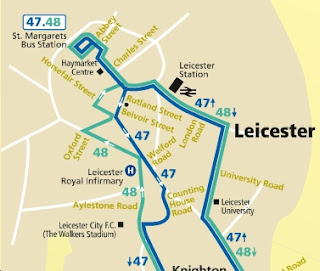 The 47 enters the city via the station and continues to St Margarets, whilst the 48 runs in the opposite direction. This information was simply not provided at the station or the stop. Having completely failed to obtain what he needed to know in "innocent" mode, fbb can be forgiven for despairing of all parties concerned. fbb's 47 sped him to St Margarets in plenty of time for his bus Groby-wards, passing the 80 at its Charles Street terminus on the way. 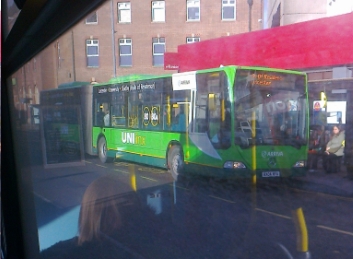 Arriva, you are missing out on revenue. Tell Plusbus to get it right, then put a huge notice on the stop: "Bus 47 to St Margarets" with departure times and see the £1 fares roll in. 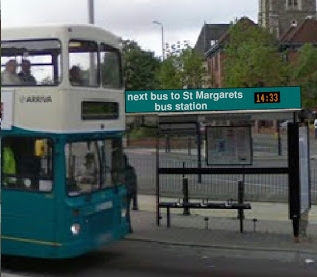 Note the height of the information frame with the bottom at average head height; maybe fbb should have stood on the seats? Almost certainly, no-one at Arriva will read this but, if they do, here is another question. As fbb sped his merry way to Groby, he saw this advert on the No. 28 bus. 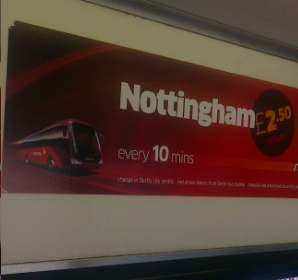 Every 10 minutes from Groby (or is it Leicester?) to Nottingham seems a fantastic service. And only £2.50. Please send full details, so fbb can blog with boundless enthusiasm.

**from the FWT company web site:- 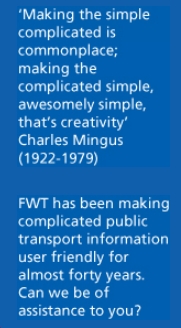 But obviously not in Leicester


Next Bus Blog : Sunday 24th Febuary
Posted by fatbusbloke at 02:00