Getting the Girls to Guildford [2]

That's the Way to Do It! 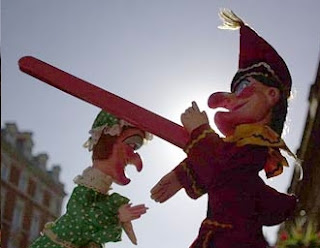 In a Punch and Judy show, Punch wears a brightly colored jester's motley and sugarloaf hat with a tassel. He is a hunchback whose hooked nose almost meets his curved, jutting chin. He carries a stick (called a slapstick) as large as himself, which he freely uses upon most of the other characters in the show. He speaks in a distinctive squawking voice, produced by a contrivance known as a swazzle or swatchel which the "professor" (i.e. the puppeteer) holds in his mouth, transmitting his gleeful cackle. His catchphrase is "thats the way to do it" usually uttered as he beats other characters with terrifying violence. Ahhh ... happy childhood days!

Which has little to do with getting Mrs fbb and chum Julia to the theatre at Guildford to watch Anton du Beke and Erin Boag twirl majestically round the stage as they do their dancing "thing". Yesterday, fbb suggested some of the problems they might face in planning their journey without his internationally celebrated expertise. (read again)

On the day of the show, SouthWest Trains were running a "snow" timetable from Portsmouth, although the snow has mostly gone. This meant that the four trains an hour from Haslemere to Waterloo was reduced to two with "fast" (i.e. slightly less slow) trains taking up the stops pf the withdrawn "slow" (i.e. tediously snail-like) journeys.

A revised plan was hatched which went as follows.

Upon arrival at Guildford use the footbridge and NOT the subway ... 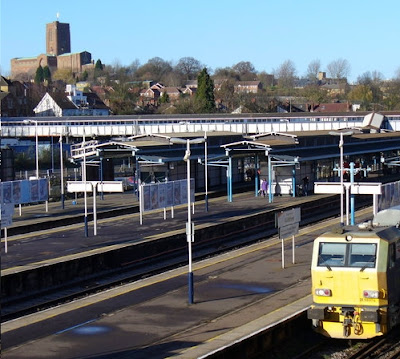 ... and leave the station via the Guildford Park Road exit, not via the main station building. [Slight fbb bludner: the exit in question is not labelled "Guildford Park Road" but, as Mrs fbb put it, "something about a university." 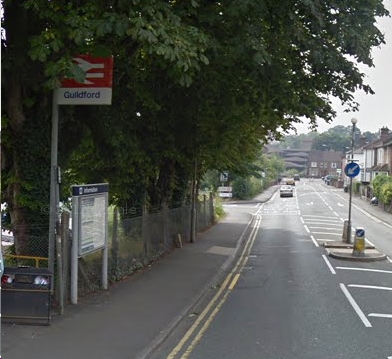 At the road, turn left, walk a few yards down the road acoss the car park entrance and wait at the stop there. [Please note : this is the "Guildford Station Stop C" as advised by Traveline, but not marled as such.]. Catch any bus from this stop to the bus station. They reported that they caught a red bus. 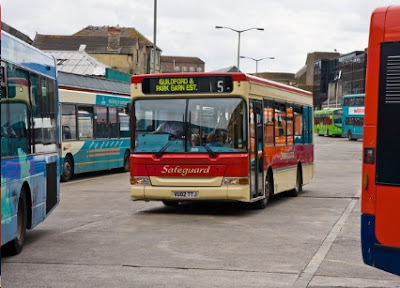 [Note once again : fbb is well aware that you can walk from the railway station to the bus station but the route is complex and unpleasant. With an old fogey free pass the bus is simplicity in the extreme.] The aim was to "take luncheon" in the Friary Shopping Centre food court before continuing to G-live.

The choice there was not entirely to the taste of the "mature" ladies' palates ... 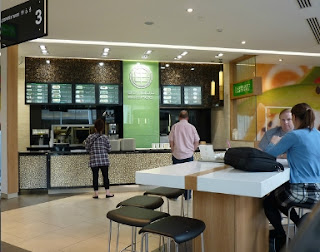 ... so they eschewed such delights as the Bamboo Basket and settled upon Muffin Break on a lower level ... 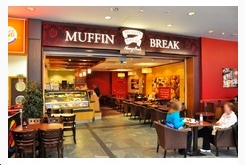 ... where the enjoyed (and they really did enjoy) a sandwich and "an excellent fresh cup of tea"! Then it was outside to a chilly bus station for the 36 to the theatre. [And, yes, they could have walked; it's not far - but there was still frozen snow on the pavements.] But where did the 36 leave from?

Much to their amazement (and fbb's!) there was a very nice Arriva man in the enquiry office (on a Saturday, wow!) who directed them to the correct departure point. 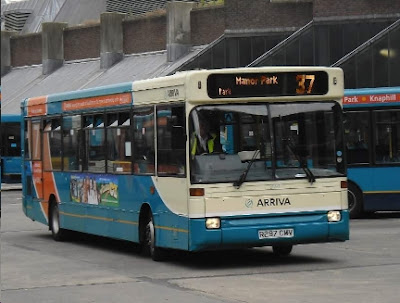 It would take a senior member of Mensa to understand Arriva's timetable for the 36 and 37 but fbb had told them to cross the road after the show and catch a service 37 which goes the opposite way round the loop ... 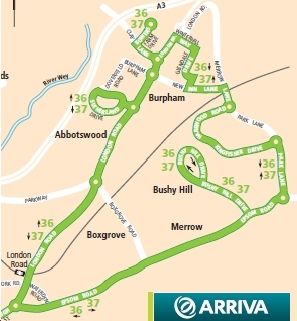 ... via Merrow and Burpham. G-live is just north of the roundabout bottom left, by the way.

Within ten minutes of leaving the foyer after a superb show, along came a 37, which, after a brief "layover" in the bus station, deposited them efficiently opposite the Guildford Park Road entrance to the station; whence the train to Portsmouth.

Two snippets of irritation, neither of which bothered "The Girls" but for different reasons. Traveline's map of the 37 route west of Guildford Centre appears to require a "U turn" at the station stop. Utter nonsense! 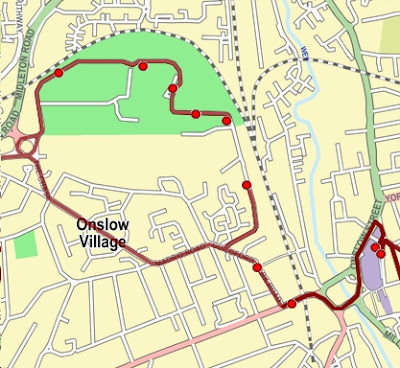 The 37 doesn't serve Onslow Village! But the intrepid theatre-goers  did not rely on the weirdness of Traveline - clever ladies!

Then there was SouthWest Trains' "emergency" (although there wasn't one; emergency, that it; not train) snow timetable. This ensured that Mrs fbb ad Julia missed the ferry back to the Island by just one minute. "Hold the ferry for 60 seconds? Don't be ridiculous, that's more than my job's worth, mate!" Another wonder of Dis-Integrated Transport.

At least fbb had warned them of this particular misery and they accepted the inevitable eventuality with happy resignation, "We've has such a lovely day. It's all gone so smoothly, Everything worked just as you said it would. So we'll just sit in the warm and wait."

Now here's the point. The information they would have gleaned from the remote and computer driven Traveline was nearly right and probably the best that it could have been. But not in a thousand bus journeys would it have delivered the confidence that local knowledge would give. If "The Girls" repeat their adventure next year, they will go by bus. More pennies for Mr Safeguard and Mr Arriva.

It they had dared to try Traveline, they would have taken a taxi.

Are bus companies missing something?

Next Blog (Rail) : Saturday 9th February
Posted by fatbusbloke at 02:00