E is for Emmanuel
[although most writers now use Immanuel with an "I" not and "E"]. It is a Hebrew word meaning "God with Us" and comes from the prophecies of Isaiah. Matthew, in his Gospel, quotes the prophecy as evidence for the truth of the Divinity of Jesus.

No serious scholar would ever support the view that Jesus never existed; the documentary evidence alone is some of the strongest for any historical character from the same first century period. But there are plenty of people who would like to think of Jesus as "just a good man" but with no recognition of his being "God with Us".

Which creates an even bigger problem. 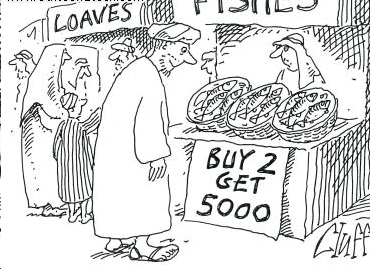 Many may choose to ignore the claims of Christ but the Christ-mas gift of a Divine child is the only "product on offer". It is our choice as to whether we accept Him or not; our choice and our set of consequences.

No, it is not Beelzebul (the devil), but God's Spirit, who gives me the power to drive out demons, which proves that the Kingdom of God has already come upon you. Anyone who is not for me is really against me.

According to Matthew's Gospel, this is how Jesus responds to those who accuse Him of doing the Devil's work. Note that even those who oppose Him do not deny his supernatural power, they merely challenge its source! 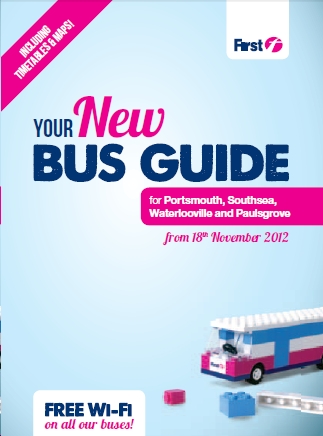 First Hampshire has always had a good reputation for its timetable books and the recent Portsmouth edition is to their usual high standard.

Each individual timetable is accompanied by a detailed route map; this for the new City circular service 1 which (mostly) replaces the historic 17 and 18 to Eastney. 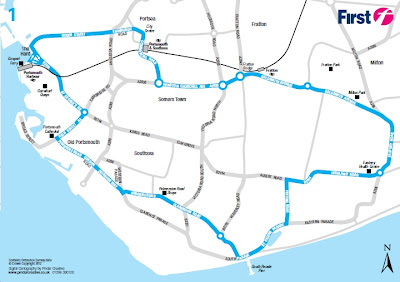 What a pleasure it is to have such helpful cartographic support for a good clear and comprehensible timetable. Could it be bettered? Yes, with a dot to show each bus stop.

There are also two network maps, one of the Portsea Island** and Paulsgrove areas, and one of the routes via Waterlooville. 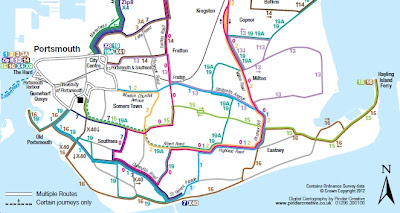 The compilers have also been sensible enough to extract the X4 journeys from the complicated 4-group timetables because they are the only journeys to serve Portsmouth. 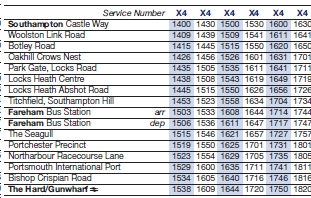 Perhaps they should have done the same with the map ... 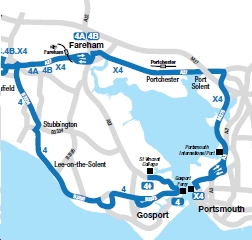 ... which shows the service 4 variant to Gosport which is not in the timetable book.

The booklet advertises what is surely a first for First. Every bus in the Portsmouth and Fareham operating area offers free WiFi. ... 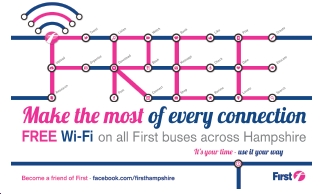 ... and they've even got a bus painted up to match! 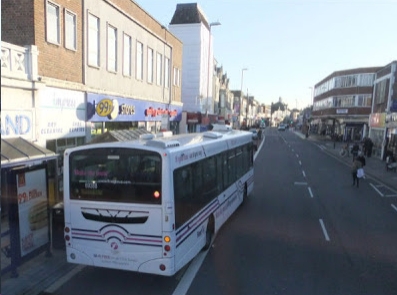 During fbb's reasonably extensive tour of the system a week or so ago, he saw no evidence of Portsmothians peering avidly at smartphone screens or surreptitiously surfing the web on a laptop balanced precariously on their knees. Maybe it's good for the youff?

The Portsmouth area book is an example to all bus companies of what can be done to promote the network. Sadly it is not the complete network because Stagecoach also runs into the City as a result of its purchase of the Southdown business in 1989. 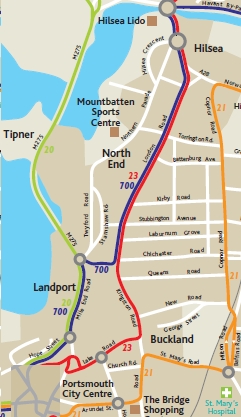 Thus there is competition of a sort on the main "out-of-city" corridors with the (current) exception of Northern Parade via the Mountbatten Centre, although this pattern will change slightly in January 2013.

Bearing in mind the "happier" relations between Fearnley's First and Uncle Brian's Stagecoach in Sheffield and Oxford plus mutually agreed sales elsewhere, "wouldn't it be luvverly" if the two giants could shake hands and publish a joint Portsmouth timetable book?

Would that really make much difference to their competitive desires?

But there is a problem with First's new network and how it is presented in the otherwise superb book. To understand that problem, and what lies behind some of the more reasoned criticism of the planners' noble efforts, we need to summarise as simply as possible what has happened to routes and times in the City area.


Next Bus Blog : Thursday 6th December
Posted by fatbusbloke at 02:08