O is for Ordinary
O is for Odd
O is for Outstanding
Nazareth is about 80 miles from Bethlehem but in between lies Samaria, a territory antagonistic to the rest of the Jewish community and which would have been avoided by travellers on health and safety grounds. Mary was heavily pregnant so progress would have been slow. 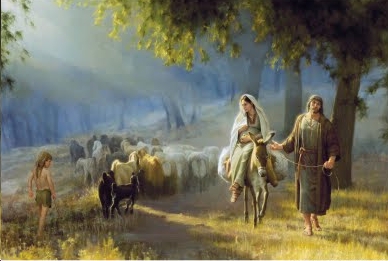 There is no donkey in the Bible. As a one-man businessman, Joe would not be a wealthy entrepreneur, merely working to keep himself and his future family fed and clothed. No investment packages and pension pot then! Some have suggested that even if there were a donkey, the social "mores" of the day would oblige Joseph to ride and Mary to walk! A donkey would be extremely uncomfortable for a woman approaching "her time".

So think at least a week's travel on foot, possibly sleeping rough in the cold of the Eastern night and travelling during the day with a lengthy siesta in the hottest hours. And then a birth where the animals were kept? 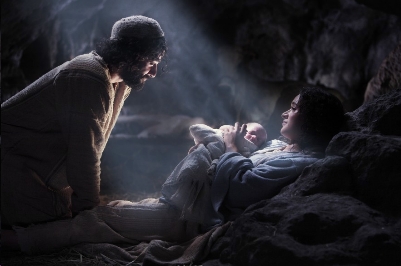 He went to register with Mary, who was promised in marriage to him. She was pregnant, and while they were in Bethlehem, the time came for her to have her baby. She gave birth to her first son, wrapped him in cloths and laid him in a manger; there was no room for them to stay in the inn.

And no cattle shed or stable either, just an assumption based on the use of a feeding trough as a cot. Modern scholarship recognises that many properties in ancient Bethlehem used local caves as animal housing as in the picture above

In many ways the real un-embellished nativity story is mostly very ordinary. It was odd that Joseph stuck by his unmarried fiancée rather than " sending her away" and scripture records some outstanding events outside and away from the main event!

So What's Going on "up Kirkstall Road"?

With over 45,000 vehicles travelling along the A65 each day, this busy radial route into Leeds was experiencing increasing congestion and delays. Without intervention the problems were set to get worse. Work to improve the route started in April 2010 and was completed on time and on budget in August 2012. The improved A65 will not only benefit current users, but will link in with the planned new railway stations at Kirkstall Forge and Apperley Bridge, giving people travelling to Leeds from the north and west a more efficient, faster and green transport system. 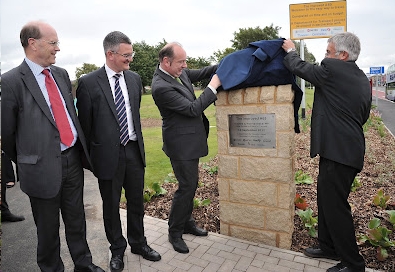 Thus is was, back on 12th September 2012, that a gaggle of the glorious glitterati of the West Yorkshire bus industry gathered at the little bit of stone wall somewhere in Leeds and with aplomb and due ceremony removed a bit of blanket from a commerorative plaque. 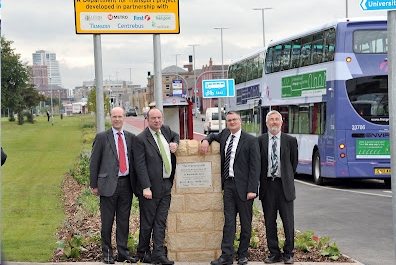 Watched over by a photographer, two First buses and a crowd of, erm, nobody, the project was duly launched. Minister Norman Baker pronounced his bit of sound bite as did reps from the PTE and Leeds City Council. Giles Fearley, First's head bus boss, offered these pearls of wisdom:-

“This is fantastic news for all bus passengers travelling along the A65 to and from Leeds. They will now be able to rely on more reliable, and in many cases, shorter journey times.

"First is investing £20m to replace 25% of its Leeds’ fleet with 98 new** low emission buses. These will be in service in the next four weeks on services across Leeds, including those operating along the A65.

"We are confident that the combination of more reliable journeys and new, modern buses will attract even more passengers."

** Not new new, surely? They were in use ferrying folk to fun times at the olympics. Nearly new? Slightly new? Almost new? New-ish? Sounds better than "second-hand." And a lot newer than most First Leeds rolling stock.

But ... there's more. And another pretty picture. 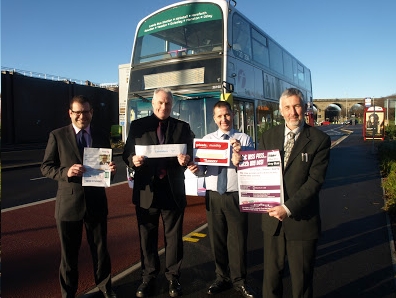 These four "commuters" are clutching ... what exactly? 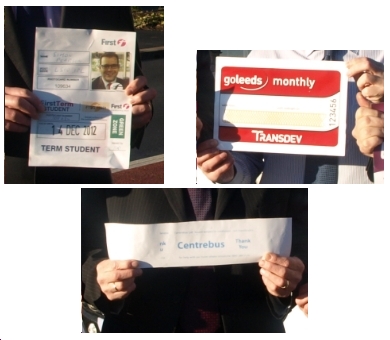 Examples of all three Kirkstall Rad operators' tickets which, from 18th November became inter-available between Leeds and the main Kirkstall Lane junction. The fourth item is an enlarged advertisement. 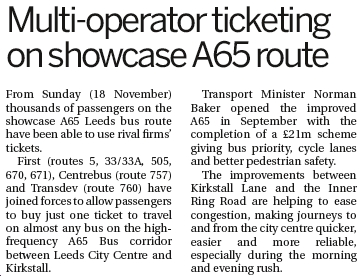 Simon Pearson, Commercial Director for First in West and North Yorkshire, said: “This is an important step by bus companies in Leeds. Customers can now take advantage of a greater ticket flexibility when travelling on brand new buses (nearly but not quite : see note above!) as well as benefitting from the excellent new bus priorities delivered by our partners. We will monitor the success of this scheme in terms of encouraging more people to use buses between Kirkstall and Leeds and, if successful, will consider rolling this out to other parts of the bus network in Leeds and the wider West Yorkshire area.” 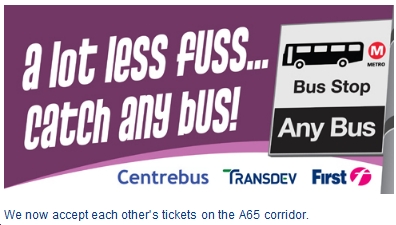 fbb does wonder why the scheme stops at Kirkstall Lane. There are proposals for a substantial development complete with a brand new railway station at Kirkstall Forge about a mile past Kirkstall lights. Get in there first, First, and be ready for the bus-travel habit! Why not? 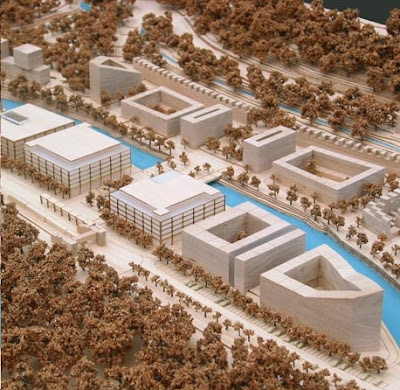 The railway (with station) runs bottom right to centre left, then the development both sides of the river, then the A65 almost off the picture top right.

But, despite this possible limitation, this is yet another example of a First Bus initiative. Where will it all end? This is not the First bus was all knew and loved hated in the past; it is a very different kettle of happy passengers.

Isn't it?
Next Bus Blog : Sunday 16th December
Posted by fatbusbloke at 02:00