-----------------------------------------------------------
Follow up to yesterday's blog;
Peace in our Time (read again).
More has emerged about the cosy deal between First and Stagecoach in Sheffield; a deal which, not long ago, would have been illegal under competition law! Political convenience rules OK. A chum has sent the real, genuine printed paper copy of Tuesday's "Star" which reveals:-
120 : [First] Fulwood-City-Crystal Peaks, replacing 40 & 41
120 : [Stagecoach] Hallamshire Hospital-City-Halfway
thus significantly reducing frequency at both extremities of the service. So much for various spokesmen!
123 : [Stagecoach] Endcliffe-City-Crystal Peaks
removing nominal competition from Walkley and replacing First's 44 to Endcliffe. Clever of First to dump the Endcliffe Student Village bit of their 44. Buses usually ran empty-ish.
ALL services via Frecheville to the Mosborough area will be part of the scheme; other than the above, these routes are largely unchanged. Maps and more explanation  to follow in due course.
Back to today's blog 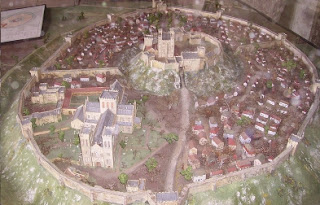 Old Sarum, Sorbiodunum in Latin, probably looked like this ...

Whereas New Sarum, Salisbury in English, looks like this ... 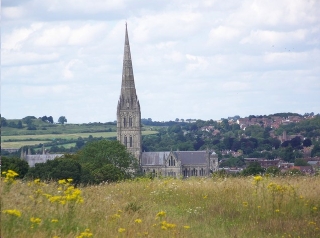 ... started in 1219, the cathedral became the focus of a new town on the banks of the Avon, visited by fbb, not in 1219, but a week or so ago.
So,  how goes it with public transport?  Let us assume that fbb arrives by train.  Needless to say, there is no bus information in the station entrance area; with the exception of leaflets for the Stonehenge Tour which leaves from just outside the door. 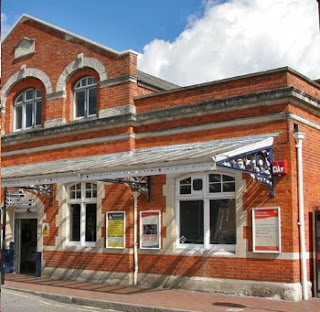 Once outside, the eagle eyed observer might, only might, spot a small poster, the central one of the three pictured above. This gives meagre information about buses using the stops on Fisherton Street at the foot of the station approach road.  It says nothing about routes that do not pass those rather uninviting stops:- 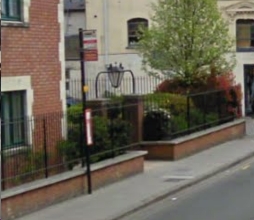 The best that can be said for Station information is that it could get you into the City Centre IF the poster told you that services were frequent.  In fact fbb did not arrive by train, but by car and stayed overnight here ...

... at The Spire B & B on Exeter Street, one of the main routes into the centre.  fbb and Mrs fbb occupied the room with the bay window, thus with an excellent view of every bus on southbound routes. Deep joy! The front door is now painted olive green.
Salisbury is the domain of Wilts and Dorset, a company that fbb has applauded on at least two previous occasions. In March 2010 the City routes were rebranded as ...

... with appropriate labels and publicity on all central stops. Big versions of the "Red" network map, a clear and helpful City Centre stops diagram plus departure lists (no timetables, poor) are fixed firmly and reasonably vandalproof-ly on all the shelters which are clearly labelled with big letters on a bright red backgound.  This is a map extract ... 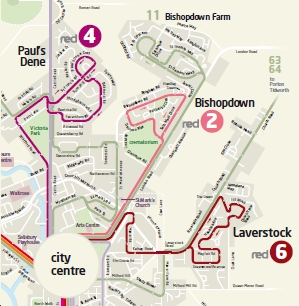 ... and the full map can be downloaded from W&D's website here. Local buses use on-street stops, whereas country services leave from a well-equipped bus station just round the corner from the Market Square. 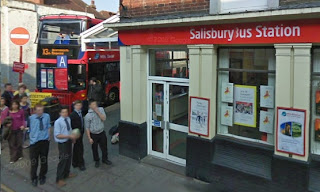 There is an enquiry office, a 1970s style formica equipped "caff", but no toilets, and no direction signs to these essential features of long bus journeys.  [They're underground in the aforementioned Market Square.]
The disappointment here was the confused state of  timetable information.  If you were a W&D route, your stand only provided a list of departures. Very UNhelpful, giving no real clue as to how long your journey might take.

But if you were a Stagecoach route, even "Activ8", joint with W&D, you were given a full enlarged print-out of the timetable page.  You also get a full timetable from Damory Coaches, effectively a low cost unit of, you guessed it, Wilts & Dorset.  Some rural routes had their timetables displayed nearby but not actually at the stand.
Overall, confusing and disappointing.  How difficult is it to enlarge a timetable page, stick it on a piece of backing card and paste it into a timetable frame? Apparently far too difficult for W&D. It looked as if it were no-one's responsibility, as if no-one cared.
So, next, fbb went for a ride. More about that and timetable information to follow in due course.
P.S. Both the B & B and the Tourist Information Office had copies of the "Reds" booklet, but neither could muster much in the way of longer distance service information. The  bus station office had everything, including photocopied pages where printed leaflets were out of stock. Now there's a good idea for Travel South Yorkshire!

Next blog : due Friday July 1st
Posted by fatbusbloke at 06:32