Having visited the Reading bus and train collectors fair, fbb had decided to nip along to Slough to have a look at the new bus station. But things were not running smoothly on First Great Western. You can hardly blame anyone because some naughty persons had stolen signalling cables overnight, except perhaps the policy of creating so-called efficient signalling centres.
In the days of supposedly inefficient signal boxes, you could, in an emergency, signal trains with green and red flags and paper tickets; a skill that has almost completely disappeared. 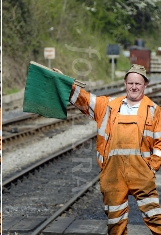 Half the population of Berskshire was thronging round the ticket hall at Reading.  fbb counted 63 in the queue for the ticket windows and a similar number jostling for supremacy at the self service machines. In the good old days, a ticket clerk could flick an Edmundson ticket from the rack ...

... and take your money in one slick sleight of hand move with the skill of a professional prestidigitator. Never no more!  What with credit cards, debit cards, complex and confusing fares and extended debates and explanations, ticket issuing takes ages. So a long wait. But fbb espies a very nice man, a very very nice man, in a smart FGW uniform and brandishing his portable ticket machine. Ticket bought (only two in the queue) and fbb slopes off to Slough. 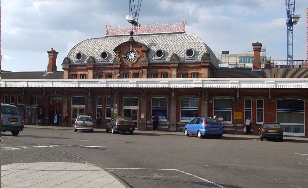 Amazingly, considering what happened later, here was a train running pretty well to time. It was the return to Reading that riled. After his quick look at the bus station slug, fbb arrived back at Slough station at 1330. The barriers were open (why did fbb buy a ticket?) and there was a small knot of staff in high-viz vests peering at the indicators and occasionally listening to their Dan Dare radio sets. The departure board in the foyer was not encouraging, however. 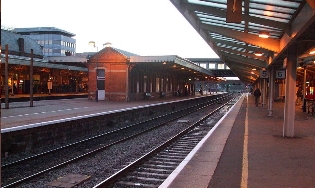 The platform indicator was hopeful ...

... with a stop at Reading, video entertainment in coach "D" and a refreshment trolley, it looked as if fbb was to get a speedy ride back. But precisely at 1334 the sign changed ...

... and Annie Nouncer confirmed the cancellation, with electronic apology.  The next "fast" was at 1406 and the inexperienced traveller might well remain on platform 2 in the hope of success there.  But fbb is made of sterner stuff and sprints (sprints? staggers, maybe!) over to platform 4 to seek out the 15 minute frequency stopping service. Good news ...

... rapidly evaporates when it all happens again.  At 1338 Annie speaks out, with croak in her throat and a tear on her electronic cheek, cancelling the 1343.

Are you grasping what happens?  These announcements are triggered by some magical electronic treadle thingey 5 minutes out from Slough.  Even if the train has long since been cancelled at Paddington, Annie doesn't know a diddly-squat about it until it disappears off the list 5 minutes previously.
Interestingly, cancellations of trains TO London are announced much earlier.  Of course, largely unnecessary as everything is at least going the same way.  But presumably the electronic trip wire happens to be "far out, man", possibly at Didcot.
fbb's frustration and fury now flow freely.  But, hark! Annie speaks again, this time announcing the delayed 1327 to Reading. 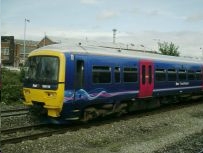 The train dutifully arrives, and sets off at 1348 carrying about a million passengers. As this train leaves Slough, Annie is just regretting that the much earlier 1257 to Reading is running 54 minutes late. You're right, it makes no sense whatever.
As fbb's can of sweaty sardines pulls into Burnham the screens are telling the waiting crowd ...

... advice sensibly ignored by another half million folk who join the ostensibly non stopping train.
What is palpably clear from all this, is that the only thing in charge, the only source of (un)reliable information is the mysterious deep throat computer located in the closely guarded bunker at Paddington.

But, being as stupid as any computer, it cannot cope with fuzzy unscheduled happenings.  Poor thing simply gets very confused, a state well known to fbb.

But it shouldn't be like this.  Managers are paid to manage.  Where were the managers (there's enough of them) at key points on the disrupted network?  Where were the people in the know who could give sensible, live and informative announcements?  What were those chaps in high-viz vests supposed to be doing?

Things do go wrong. Stuff happens. It's what you do then that shows your management mettle; or, in this case, floppy droopy plastic!

Poor, all round. Tim O'Toole, the boss, needs to have a bit of a strop.

Next blog : due Saturday June 18th
Posted by fatbusbloke at 05:45