fbb DID visit a bomb store!


As might be expected from the World Wide Web, a correspondent has, in part, solved the "Riddle of Ravenstone Wood" (read again). The woodland is part of a Norman hunting ground, owned by the Manor of Yardley, with its village, Yardley Hastings, on the A428 Northampton to Bedford road (top right). 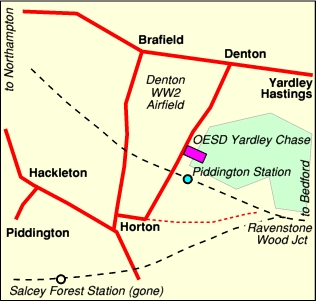 Yardley Chase contains some large concrete huts, about 12m (40 feet) long, and about 6-8m (20–25 feet) wide, which were used during World War II to store bombs. They continued in use after the war, until the 1980s [dates uncertain - fbb] when the Ministry of Defence shut them down when it became obvious that they would be useless in a nuclear war. The depot was served by a branch off the Northampton-Bedford railway line and evidence of revetted tracks are still visible around the site. 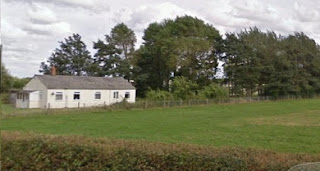 There are obvious remnants of military buildings to be seen from the narrow back road between Horton and Denton. An anonymous drive leads to more modern buildings hidden behind the trees.  The white hut (above) is shown top left of the aerial pic below. 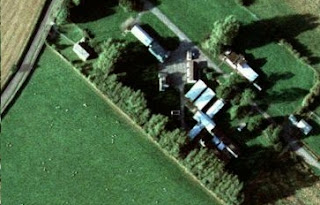 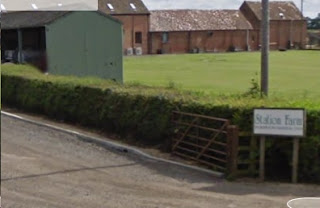 ... there are some very un-farm like sheds and an official-looking direction board.

Nearby stood the remote Piddington Station, 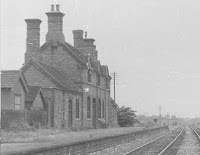 still standing and still occupied as a private dwelling  today. 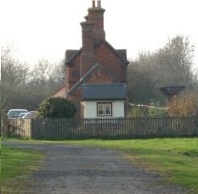 A Mr Ivor Neale of Olney (who died in 2010) writes his memories of the area:-
There was a branch line from Piddington Station to a Ministry of Defence armament storage depot in Yardley Chase; in use until the 1970's.
Elsewhere on the web, a keen student of military history has sought to recreate, cartographically, the extensive network of sidings that were built to service the ammo depot during WW2.  Piddington Station is where the yellow sidings leave the red Northampton to Bedford line. Each spur terminated at a storage shed. 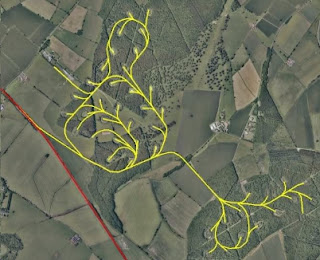 Records of the Vulcan Foundry at Newton-le-Willows include details of three diesel locomotives built for MOD use and named after the woodland site ...

... and even picture the locos under construction!

Furthermore, the Buckinghamshire Railway Centre at Quainton owns a brake van, originally built for the Southern Railway but diverted for military use.

The van worked on the internal railway systems at various army depots, coming to Quainton from Yardley Chase, Northampton. 49014 was one of three identical vans at Yardley Chase when it closed in 1980.
So, a number of mysteries are solved.  Firstly, why did trains still call at Piddington as late as 1962?   The station was in the middle of nowhere, but, possibly was retained to serve the Depot. 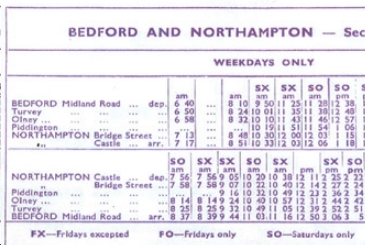 Secondly, why was a significant stub of the Northampton to Bedford line kept in good working order for at least 20 years after the line was "officially" closed?  Answer, to serve the Depot. 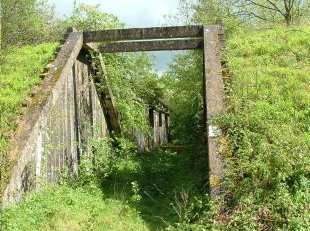 Thirdly, the huge teacup shaped constructions espied by a fearful young fbb would have been blast walls to direct any accidental detonation upwards rather than outwards to the detriment of any passing cows! For the record, the installation at Ravenstone Wood Junction was some distance south and east from the main site, possibly for safety reasons, and does not appear to have been rail connected.
At least until relatively recently, the site off the Denton Road was still used as a training camp...

... closed off to the public and protected by substantial fencing.  Some access has been opened up within the last year or so.  [sorry, fbb has no idea what "O E S D" stands for!]
Of course, like everything in Military ownership, it is never certain how "closed" the site is.  The well maintained railway link has gone but, you never know ...
... there may yet be more mysteries above and under the ground in Ravenstone Wood.