Turnaround for Trams and Trolleys 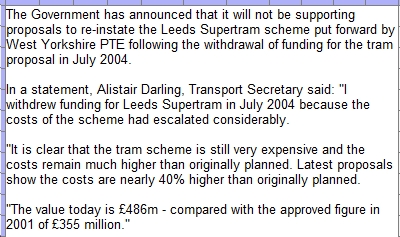 But some reminiscences about actually turning a tram round. 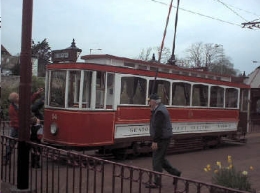 Most old-type trams were built to be bi-directional.  At the terminus the conductor would turn the seats so they faced in the opposite direction; then with the help of a long pole, he would reverse the tram's trolley, making sure that it was correctly placed against the overhead wire. Many cities had reversers built into the overhead wiring ... 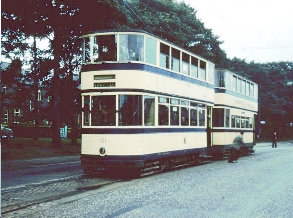 ... as here as Meadowhead, Sheffield.  Indeed all termini in that great tramway city had reversers. A reverser was a "triangle" of overhead wires and spring loaded "frogs" (they would be "points" on a railway track) which automatically turned the trolley pole round. The partial exception was at Millhouses, where in addition to a reverser, a turning loop was installed to provide accommodation for extra vehicles to carry the crowds to and from the popular Millhouses Park. 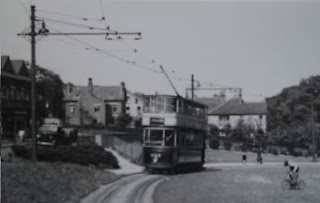 With the closure of the system in 1960, the loop was surfaced and used by terminating service 24 buses.  This recent view (below) is along Terminus Road with the gabled shops (above, behind the tram pole) still seen on the left. But the turning circle is now obliterated by a block of flats. For the pedantic purists, trams traversed the loop in a clockwise direction, whereas the replacement buses ran anti-clockwise!

Exceptionally, the system at Blackpool, currently enjoying a massive rebuild and upgrade, has turning loops at both ends of the line, seen here at Fleetwood with the loop provided for on-street running ... 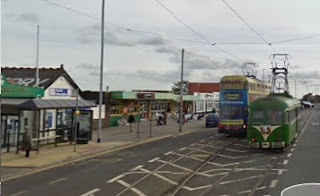 ... and in an aerial view of the southern terminus at Starr Gate. Here the track is "reserved", i.e. separated from the public roadway. 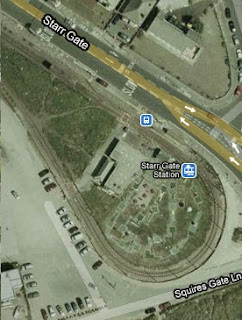 But, like so much in transport history, wrestling with trolley poles is a thing of the past.  Modern trams  have pantographs and the driver simply changes ends, as here at New Addington, Croydon. 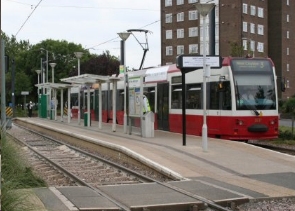 Trolleybuses were not restricted quite so much by a set of rails, yet many turned in loops, at roundabouts or even by reversing.  In Christchurch (Bournemouth) there was a turntable where beefy conductors pushed the vehicle to complete the turn. 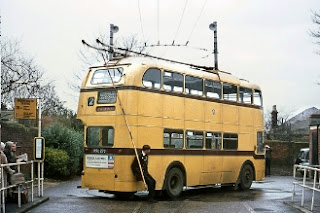 At the Longwood terminus in Huddersfield a platform was built out over a field and supported on stanchions. It carried a turntable for a while but later was used for as simple reverse as here ... 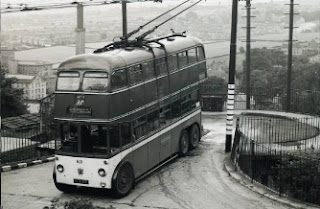 The platform lasted for many years after the trolleybuses were replaced with their less environmentally friendly motor bus. One hapless trolley driver suffered the ignominious horror of reversing off the platform and into the field below. Whoops! The long-disused platform is seen here from the replacement bus turning loop. 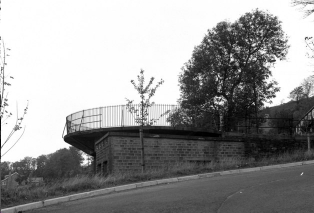 Now nothing at all remains of this oddity (except the trees behind it and the electricity substation in front) but motor buses still pass the stop on the 353 / 356 circular service.

Spot the trees and the substation's flat roof with the modern red bus shelter beyond. 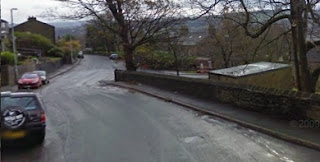 Now Leeds reckons it can replace its cancelled tram with a trendy new continental-style trolleybus network. Best of luck chaps, but, in the current economic and political climate, don't hold your breath!

P.S. One other turntable is recorded on a trolleybus system, here at Solingen in Germany ... 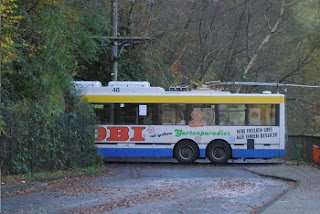 ... but, sadly, this last remaining trolley turntable in the whole wide world is only used for "historische fahrten", as per the map below. Video of the "drehsheibe" in action here. Electrically powered; vorsprung durch technik! 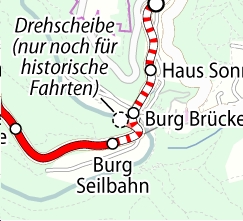 Interestingly the 683 route that once used the turntable travels through the centre of town and on, northwards, where it connects with the unique Wuppertal dangly tramway.