Two recent blogs have exposed the frustration of the latest G B rail Timetable, in hard copy and on-line. Missing trains, confusing and inaccurate timetables and baffling information seem to be the order of the day. Unsettling Sunday Saunter to Settle [2] (read again) concentrated on Table 94, Manchester to Clitheroe, which is a mess.
Because fbb is a glutton for punishment (as well as a glutton for cheese sandwiches) he decided to have a look at Dalesrail trains on Table 36, the full timetable for Bradford to Skipton, Leeds to Skipon and the Settle & Carlisle Line.
A reminder, first, of the southbound Sunday trains from Carlisle via Clitheroe to Lancashire, of which the earlier one is simply omitted from Tables 94 and 97.  On the Dalesrail leaflet both are shown as carrying a refreshment trolley (note "T") and the dates of operation are indicated by "A" for the Blackpool service and "B" for the train which is missing elsewhere:- 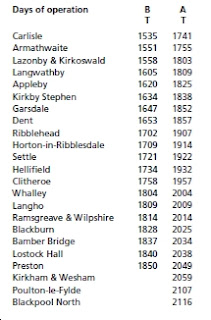 Table 36 shows no trolley service on the 1535 and the times south of Hellifield do not match at all.  GB Rail Timetable offers no stops at Clitheroe & Blackburn and a twenty minute earlier arrival at Preston. Remember that this journey does not appear anywhere else in the book. 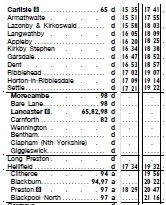 So which is correct?  The clever money is on the Dalesrail leaflet, confirmed by Northern, the company that runs the service.  It would appear that the fine, upstanding, Network Rail staff at Milton Keynes haven't got a clue!  No doubt like a certain Yorkshire transport organisation occasionally mentioned in these blogs, (now who could that be?) the philosophy is that it's on the computer so it must be right.  WRONG!
Whilst perusing table 36, fbb came across some less serious, but equally irritating oddities.  From 18th July, the 0655 East Coast Railway express from Skipton to London ... 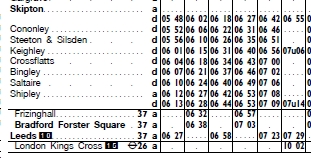 ... has a fascinating catering service as shown by note "A" at the top of the column:-

This tells me that the train has a buffet and trolley service from Leeds and a plated hot meal service from Skipton to Shipley, a 19 minute journey.  Oh yes it does!  Oh no it doesn't!  It's a bludner.

... has a column heading note "B" which tells me that it comes from Leeds.  Really?  Yes it does, but so does all the rest of the 30 minute local train frequency.  They all come from Leeds and go back there.  (O.K. oh pedantic reader; some slumber in sidings at Skipton overnight!).
It beggars belief that such obvious mistakes can creep in, mistakes that are repeated on table after table throughout the book.

We need a break from this anguish.  So here a nice pic of the down Thames-Clyde express which ran from St Pancras to Glasgow via The Settle & Carlisle line and, incidentally, was the train fbb used regularly on Sundays from Kettering to return to University in Sheffield. 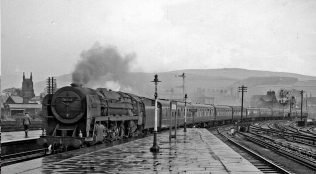 A damp and unelectrified Skipton reverberates to the beat of the Britannia's cylinders.  The "Brit" is 70044 Earl Haig, dwarfed by Skipton moor in the background.  Somehow, that makes you feel better.
And finally from Table 36? It is a misprint, and obviously so, but you would expect something like this to be SO obvious as to be spotted. It is certainly a more obvious glitch than any others.

Perhaps the Network Rail timetable people are so computer driven that they never check hard copy? NOT a good idea, as we have seen in this series of blogs. Perhaps fbb will decide not to waste £16 next time?

Next blog : due Thursday June 23nd
Posted by fatbusbloke at 01:50