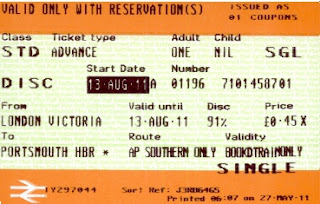 The ticket is real, bought by (and one of three to be used by) fbb, Mrs fbb and a chum as part of a trip to York for a frend's 90th Birthday. And yes, it does read 45p single.  It's all this weird guy's fault.

Loco Toledo is an immensely irritating character created to advertise Southern Trains.  He is supposed to be a wrestler from Mexico but his "back story" does not seem to explain how he winds up on the platforms at London Victoria in his lurid yellow and green costume. fbb assumes that you will not have met the guy unless you have the misfortune to live in the Southern advertising area. 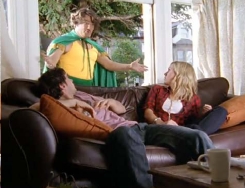 In his most recent televisual manifestation, he arrives, unannounced, via the patio doors to encourage a respectable but lethargic couple to have a day out by train.  We must presume that they refrain from calling the police, or, more likely, the padded van and the men in white coats.
Well, recently, it was Loco Toledo's Birthday.  There's lovely! 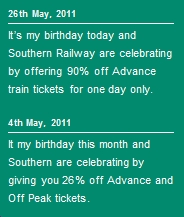 There was a general discount offer from 4th May followed by an on-line offer on the Mexican madman's actual birthday, Thursday 26th May; no, really, keep up with the narrative. Presumably this was a year from his first dramatic appearance on our screens. Mrs fbb spotted the offer elsewhere on-line and it seemed too good to be true.
Excitement turned to despair when, as might well be expected, the website ground to a sad and sorry halt for most of the one-day birthday offer.  At least it did c/o fbb where broad band is decidedly narrow.  fbb's residence is at the end of the electric string that delivers the interwebnet. But, the offer was extended ...
90% ADVANCE TICKET SALE EXTENDED TO MIDNIGHT SUNDAY 29th MAY 2011
As a result of high demand causing some performance problems [understatement of the year - fbb] with our website we have extended the end of the sale to midnight on Sunday 29th May 2011, so if the site is busy then please come back and visit it over the weekend when demand will be lower. There are 750,000 Advance tickets available at the discounted price, so there should be plenty for everyone.
And the rest, as they say, is history. Southern have been very determined to make on-line buying  an attractive proposition, claiming a 30% increase in intrenet bookings since Loco lumbered into view.

As a special offer, they currently permit cancellation without penalty (subject to certain conditions) and there are no fees of any kind. Why anyone would want to pay extra to use "The Trainline" as here ... 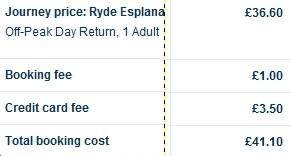 ... is a complete mystery. And first class postage is free as well; although you still have to pay for Special Delivery; shame.

For the record, the birthday offer has now expired, but Southern often have other discount offers for their own company-specific off-peak tickets purchased on line.  And, for the old fogeys, Senior Railcard's 34% off applies as well.  At this rate, they'll soon be paying US to travel.
Now, for those less informed on Railway matters, who are "Southern Trains"?  The routes have been, in order operated by ...
London Brighton and South Coast Railway
The Central Division of Southern Railway
The Central Division of British Rail Southern Region
South Central bit of Network Southeast
Connex South Central
Southern Trains (owned by GoVia)
In case you were desperate to know, GoVia is a partnership between GoAhead (of bus fame) and Keolis, a department of the French Government.
So now you know. Simple, isn't it?
As LBSCR they used to run trains with proper engines, like this:- 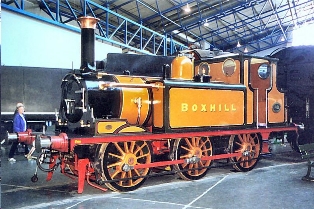 And now, as Southern Trains, their trains look like this:- 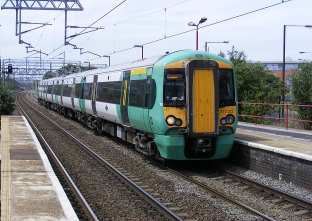 But, fbb does have a few final thoughts. (Doesn't he always?)
Are these silly prices, very silly prices, really the "come hither" offer they are made out to be.  fbb was going anyway!
How many "ordinary" and unsuspecting customers were prevented form buying by the website wobbly?
How much of the offer is driven by what the software can do?  Would an easier-to-buy bargain have been something like a £5 flat fare off-peak for the day?  Or couldn't the all-powerful control-freak computer cope with that?
Never mind, eh?  fbb can suffer Loco Toledo, the most irritating human being since the Go Compare tenor, if he gets his party of aged revellers to their rave in York at a substantial saving. More cash left for an extra glug of Wincarnis and another cucumber sandwich. Turn up the volume on the Mantovani record. "We know how to party!"