In 1967 the electrification of the so-called West Coast main line (which barely goes NEAR the West Coast!) was complete.  This brought shiny new AM10 [later class 310] units to Northampton which rapidly developed into a commuter town. 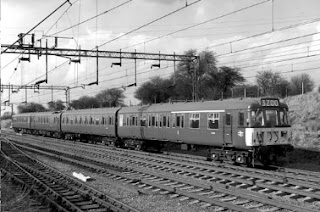 To promote the new services BR had some stunning off-peak travel offers. From memory (not always reliable in detail) the day return fare to London was then 20 shillings and 6 pence (£1.02½).  These offers were to seaside resorts via London.  Brighton was, fbb thinks, 21 shillings (£1.05).  That meant that the London to Brighton leg was just a tanner, i.e. 6d (2½p) return. And, exceptionally in those days, the underground fare was included in the ticket price.  fbb travelled to Brighton, Margate, Saarfend and Eastbourne for similarly silly prices.
-------------------------------------------------------
Claude Lane was well-pleased with the success of his little tram at fetes and festivals.  He decided to try for something more ambitious, so in 1951 established a track along the sea front at St Leonards. It ran from the huge outdoor pool, opened in 1933, along Sea Road towards Hastings. 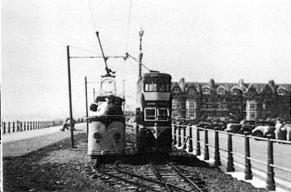 The track was installed where car parking is now, on the left; the buildings in the background are unchanged.

His two trams were popular with the public ... 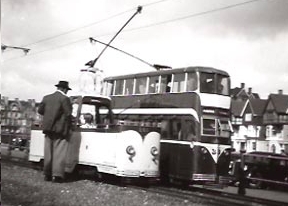 .. but not with a small proportion of the residents of somewhat "superior" St Leonards and the contract was not renewed. One picture, however, gives some idea of the diminutive size of the first tram; suitable for children only.  A few adults could, however,  squeeze into the open-topper. 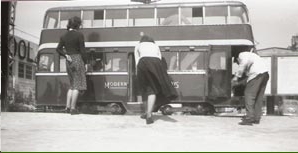 So, it was off to Rhyl where the trams performed sterling service at the Voryd Hall park. 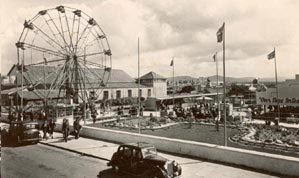 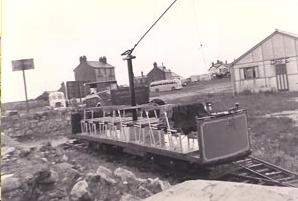 This tram will re-appear in our story later.  1957 was the last year at Rhyl and the whole project moved to a new site at Eastbourne which is where fbb enjoyed a ride in 1967.  Voryd Hall Pleasure Park closed in 1959 and, after some years of decay, the site is now awaiting trendy development as an ASDA supermarket and posh flats. 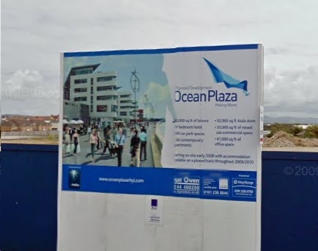 The Crumbles, at Eastbourne, was a stretch of shingle and scrub stretching west from Prince's Park.

It proved an ideal and surprisingly spectacular tram ride. Extra vehicles were built or modified, now to a broader gauge and a better size for family entertainment.  The toastrack was rebuilt as a "proper" tram seen here alongside the Pevensey Bay road.  It was this tram that fbb rode on in 1967. 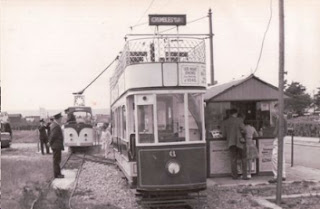 But ultimately the Crumbles was due for development. 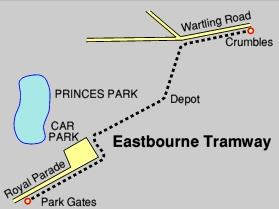 Compare the sketch map above with an aerial view today. New roads (Prince William Parade replacing Wartling Road and Royal Parade extended to the big roundabout), shops, houses, hotel and retail park with no room for a tourist tram route, however delightful. 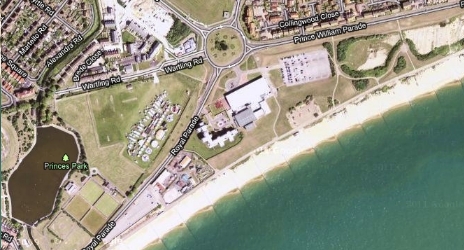 The tramway ran from bottom left at Princes Park gates, around the funfair, along the bottom edge of the big roundabout and along what is now Prince William Parade. The far terminus was roughly at the top right corner of this recent aerial view.

So, in 1969, Claude Lane moved one last time to what was to become a permanent site on the erstwhile railway line between Colyton, Colyford and Seaton.  Winter 1969 saw 36 lorry trips between Eastbourne and Seaton, driven by Claude and his assistant Allan Gardner.  Sadly Claude Lane died of a heart attack in 1971 before his pride and joy could be completed in the Devon resort.

Our final blog in this series will compete the story with a review of the line today.

Next blog : due Tuesday June 28th
Posted by fatbusbloke at 05:54