For the very first time in his long and comparatively ignoble life, on Saturday 4th June 2011 fbb set off to visit a bus and rail collectors' fair ...

... of which more later.  The out and return journeys were, for fbb at least, on time (to the minute) and trouble free.  It was good to see public transport working well.  But there is little delight in simple good news, and, not unexpectedly, fbb has three grumpy grumps to report.
Grump Number One
As fbb queued in good time for the 0747 "fastcat" at Ryde Pier he spent his time reading rather small notices, mostly about arrangements for the forthcoming Pop Festival.  It was another small panel that caught his eye. "Vessels will be very busy for the weekend of the Global Rock Challenge," it said, "and passengers should book a seat."  A bit late, Wightlink, by the time you are the front of the queue! The notice didn't actually tell you when this momentous activity would take place, but ...
Global Rock? 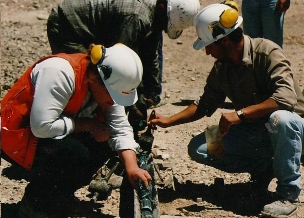 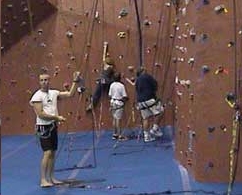 Neither of these scenarios explained a large number of oddly-dressed "youff" congregating excitedly and chattering noisily, awaiting the same sailing as fbb. 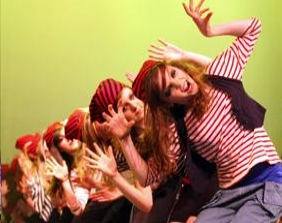 It transpires that it is a national "dancing" competition of which the regional finals were in Portsmouth. 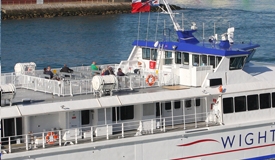 From his seat on a chilly sun deck on Wight Ryder, fbb saw the remainder of the waiting queue being halted and an onslaught of Ryde High School students being ushered to the front and on to the vessel. Next came an announcement that the boat was "full to capacity" and the next sailing would be an hour later. 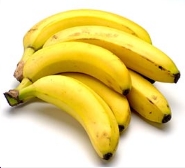 Tough bananas for those who failed to "book in advance" as advised by the pointlessly-placed notice.  Tough bananas, too, for the other party of (presumably unbooked) young people who had to enjoy an hour's wait. Even tougher bananas for the innocent and non-informed "ordinary" travellers who were resoundingly "told off" over the p.a. system for not arriving 15 minutes before the ferry departure; difficult to do as the connecting train from Sandown arrives a mere 5 minutes before the sailing!

And there were 43 empty seats on the sun deck. Meanwhile, the second ferry was sitting in Portsmouth Harbour being prepared to form the half-hour service later that morning!
Readers will wonder, as did fbb, why Wightlink didn't consider bringing the second vessel into service a couple of trips earlier.
But that would involve management actually managing. That would never do.
Grump Number Two
Waiting for his connection on Guildford's platform 8 (far left), 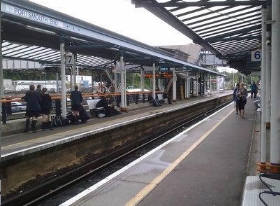 fbb had time to observe the arrival of the half-hourly service from Ascot. Or was it? Ascot was displayed on the indicator on the side of the train.  This was confirmed by fbb's printed timetable.

But the display on the platform showed a train to Camberley, two stops short of Ascot. The recorded announcement confirmed this with no guidance as to how a passenger might travel forward to Bagshot and Ascot.  The train departed on time and unexplained.
By 1530, when fbb passed that way again, passengers were being informed of a connecting bus.  Perhaps someone had, at last,  pushed the right button on the dreaded computer. Now a real person might have changed the display on the train and made the correct announcements all day!

But fbb understand that train crew have no access to on-board announcements. They can, it appears, only be adjusted upon a personally signed authority from Brian Souter himself. Several acne encrusted young men in white coats and with thick specs and beards will then reprogram the on-board computer.
Grump Number Three
And a long-standing grump.  Two of fbb's adult sons and Mrs fbb have been caught out by this one.  Waiting on Guildford's platform 4 for a train to Portsmouth, the prospective passenger first espies on the indicator, and hears on the loudspeaker, a train at 25 minutes past the hour to Portsmouth and Southsea. Many vibrant Vectensians and perky Portsmothians would be tempted to board this, expecting to save a precious few minutes on their homeward run..
BUT ... beware, inexperienced train traveller. This particular service sits at Haslemere for 10 minutes whilst the following service (34 minutes past from Guildford) overtakes it.  Same system every hour. 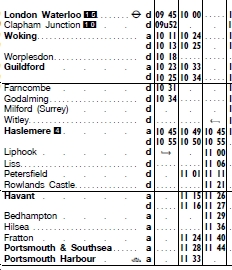 This little quirk of timetabling is never explained at Guildford, effectively giving the unwary a 20 minute longer and much less convenient journey.  For those going to the Island, it can mean a further 30 minutes in the joyful surroundings of Portsmouth's stations. Yippee!
If the train were announced as terminating at Havant, for example, mistakes would be avoided.  But it's on the computer, so it must be churned out.  Incidentally, exceedingly slow trains from Leeds to York via Harrogate are announced in Leeds as terminating at Poppleton, the last station before York, precisely to prevent a similar misunderstanding.
Even a recalcitrant and unthinking computer could be told to do something similar, once an hour, at Woking and Guildford.
Three grumps; three things that could have been better.  But these minor failures pale into insignificance when something goes really wrong with the smooth running of the railway.  How does computer controlled (mis-) information cope with a major incident?  A future blog will reveal all ...
... and its not nice!

Next blog : due Thursday June 9th
Posted by fatbusbloke at 06:30