The benefits of Privatisation, NOT?  PART ONE


fbb attended that excellent educational establishment, Billing Primary School - also attended, some 30 years later by actor-to-be Matt Smith, the 145th Doctor Who.  (Well, is seems like that at times - fbb is an avid fan as well as a bit of a bus blog saddo.)   And THIS is a reconstruction of the very first bus article written by a 6 year old future blogger:-

Note that it is the local independent operator (actually York Brothers of Cogenhoe) which offers reliability compared with Northampton Corporation (red) and United Counties (green).  An unjustifiable slur, of course, but indicative of the pride with which the local bus was viewed. 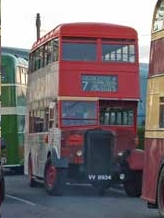 It was future fbb's maiden aunt (really Aunt Flo, but she professed posh and insisted on Auntie Anne, pronounced "Enn"!) who routinely took him on rides to the far flung disticts of Northampton, returning for a bag of chips at Allibones on the Wellingborough Road, then walking back to Auntie's pad past the co-op bakery.  The smell of freshly baked bread was fantastic, and if you were lucky, you could see the loaves trundling down the conveyor belt to the delivery vans. 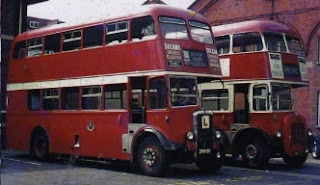 One evening the dynamic duo espied bus 190, newly delivered (but seen above in later guise as a driver trainer), waiting at Abington Park to convey revellers at the Agricultural Show back into town.  The young lad was given a personal tour by the conductor.   Wow! 8'6" wide with the smell of real leather on the top deck. Harrogate and District didn't invent posh seats; they were normal for NCT at that time!
But a diet of Daimlers with Roe bodywork was not, from an omnibology point of view, particularly stimulating. Transient delights were (minor) livery variations and the ecstatic excitement of bus 228 which was the first to have fluorescent lighting fitted.  Such a thrill! But this staid operator stolidly plodded along the main roads to the Town Boundary, turned round and plodded back again. 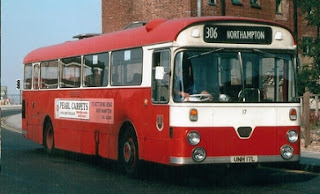 Single decks arrived - but still daimlers.  Then it all happened.  In the 70s a political decision was taken to double the town's size, but first expanding east, and then south.   A huge new shopping centre was built on the edge of the town and buses were dramatically extended into the so-called "Eastern District".   Interestingly there were still "boundaries".   NCT Service 1 was extended from Weston Favell (The Trumpet) and some United Counties services were created, amended or extended to cope with the early flush of development. 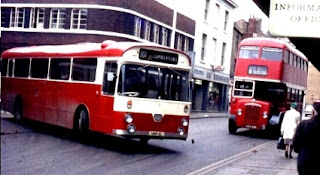 The scheme imvolved NCT buses running on United Counties "owned" routes and, shock of shock, the richly red vehicles taking their place on stands in the Derngate Bus Station amidst hitherto all-pervading green. Above is a 301 to Lumbertubs (on its way, passing close by the deliciously named Buttocks Booth!!) leaving Derngate, let out by a number 8, one of the only  two "indirect" routes run by the Corporation. 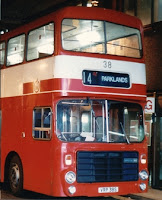 Then came VRs and Leyland Nationals and the unique quality of the (rather boring) operator was beginning to evaporate.   In May 1976 Derngate bus station closed and all services moved to the universally despised Geryfriars bus Mausoleum (OK, bus station).  Then came privatisation!
NCT became part of First, having been originally bought by Grampian (Aberdeen) before it merged with Badgerline; here in Northampton's version of Grampian livery but badged as "First". 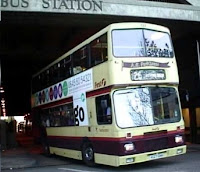 United Counties was one of the early acquisitions by the growth-hungry Brian Souter; becoming part of the expanding Stagecoach empire.
Despite new ownership, the two groups largely kept clear of each other's operations.   First ran the old "Town" routes with some extensions whilst Stagecoach plied the roads to the outer suburbs of the new development.   It all seemed to work rather well.
So how are things some 25 years after privatisation?   Not so good. There are many bolshie little bunnies in the Borough.

To find out more, look out for PART TWO!!   Coming Soon!