A present for Travel South Yorkshire
An extra-blog.


Yesterday's blog, "Service Seventy Shambles" (read again) had an immediate effect at the hallowed home of the henchmen of David Brown, Director of TSY.  The erroneous leaflets will be dumped and the incorrect timetable has already been removed from the interweb; all this happening just hours after fbb's blog was published.

So someone reads it!

Sadly the timetables index page still carried the mistake well over 24 hours after the offending detailed information was removed!

So fbb is now able to offer TSY another little hint - two months before the change happens.  Hopefully long enough to get it right, sustainably.

On 9th May, Stagecoach will make a significant incision in the timetable of the once-proud link between Sheffield and Mansfield, service 53.  (For the benefit of pedantic "hairies", the evening and Sunday variant, diverted in the Mosborough area, is numbered 53A.)

By mid 1969 the long-standing traditional service 3 between Sheffield and Mansfield was joined by a limited stop version, the X53.
By the mid 80s the "ordinary" service was now numbered X53, (although there was nothing particularly "X" about it) running hourly with numerous extras:-

The real limited stop service was numbered 100 (Note, no "X" despite its limited stoppedness) and ran through to Nottingham.   The 100 was also hourly!

The Mansfield route has never run less than once an hour in fbb's memory, which, although somewhat more unreliable these days, does go back to 1963!  An old fbb picture shows joint operator Trent working the X53 in the early 70s. 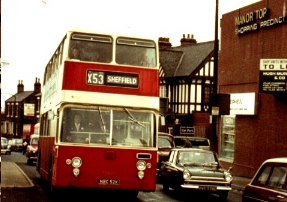 But by May 1989 the current service of an hourly 53 had replaced all previous combinations of stopping patterns.

From 9th May 2011 this service drops to 2 hourly, but, retains the existing 2 hourly frequency on Sundays. How does fbb obtain this information, some two months prior to the change?   It comes, as ever, from the splendid Derbyshire County Council web site, which posted an advance warning of the chop about three weeks ago. The actual timetable had appeared by 10th March.   Here just a bit of it:- 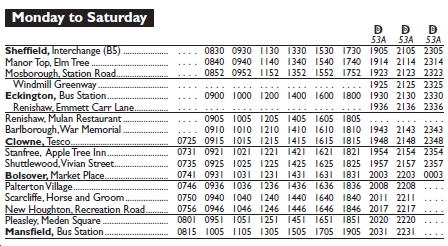 Now, as chums at Travel South Yorkshire seem to struggle "sustainably" to get things right, fbb has placed a copy of the full Derbyshire PDF here.   So please feel free, chaps and chapesses, to download it and drop it into your sustainable system.  Recent evidence suggests that it will be 100% right and fbb's generous gift (?) will save you lots of work!

Derbyshire have published the revised service X52/252 as well, by the way.
Please, TSY, there's no need to offer effusive thanks; just trying to give a helping hand!

(North) Home Town : Northampton [2]
will be published on 12th March